Can you identify the unusual item in the following micrographs (×160)? 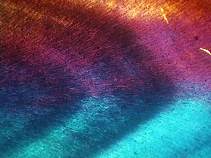 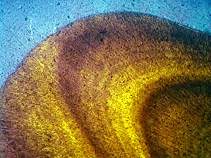 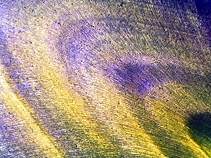 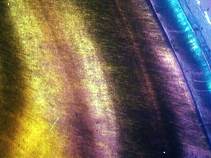 Well, they are thin-section photos of a dead dolphin’s teeth.

So what? Why are they important?

They are used for age determination and health history of dolphins; and here is how and why it is done.

In June 1996, the dolphin was found dead in the mangroves on an island in Estero Bay, Lee County, southwestern Florida. All the micrographs shown here are from two teeth that were taken from this deceased dolphin in order to determine its age.

A method of age-estimation, by counting growth-layers in teeth, was first developed in the southern elephant seal, Mirounga leonina. It has since been applied to toothed whales and dolphins with some success. Layers can be seen in a length-wise thin-section of a tooth. Patterns of these layers, referred to as growth-layer groups, occur in cyclic fashion, somewhat like the growth rings in trees. The actual growth rates of deposition of layers are only known for a few species, but appears to work well in dolphins and pilot whales. The layered structure of cetacean teeth is essentially similar among species, varying only in detail, and it is recognized as a useful method of age-determination. Some researchers have determined age of bottle-nose dolphins, Tursiops truncatus, using this method. The cement of the tooth showed growth-layering which could be counted. This age-determination enabled researchers to state that females and males attain sexual maturity when 12 and 12–18 growth-layers, respectively, are laid down. The maximum number of layers was 50, but usually the average was 35. In the literature, the lengthwise thin-section examinations of the dolphin teeth have resulted in the observation that the growth layers are cyclic and appear in definite patterns, somewhat like growth-rings in certain trees. Although most cetacean researchers agree that the growth rings are age equivalent, some investigators have questioned the actual rates of deposition and have questioned the relationship to age in some species of whale.

One method of preparation of the tooth for examination is by cutting the tooth into wafer-thin slices, as is performed on rocks. The tooth is first embedded in plastic in a vacuum, and then trimmed with a saw when cured. Then one side is ground down, using various sizes of grit, until highly polished. Finally the whole sample is affixed to a glass slide with epoxy. After curing for a couple of days, it is thinly sliced parallel to the glass slide with a special diamond saw and ground down, again using many grit sizes, until polished. After preparation the thin section is examined under a polarizing microscope. The fine banding can be intensified with the use of crossed polars and retardation plates. 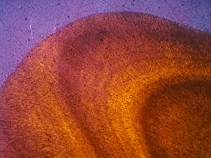 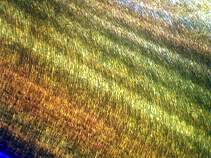 Another preparation method for examining the growth-layers has been proposed by Bow & Purday (1966). The tooth is bisected longitudinally, and the cut surface of the mounted tooth is etched for 30 hours with 5% formic acid in tap water at room temperature. This procedure gives good definition of the zones of the pulp cavity and the dark dentine zones. The fine bands that occur between prominent dark bands can be intensified by submerging the tooth in a bath of 20% formic acid at 80°F for 90 minutes. This procedure causes the corrugation of the previously flat surface with ridges and grooves that can easily be counted and photographed.

In the case presented here, the two teeth were prepared as lengthwise thin sections, and examined under a petrographic microscope using crossed polarized light with a retardation plate. The results showed that the age of this specimen, based on the number of bands, appears to be 19.5 years. However, the crown of the tooth is not banded as in pilot whales but is a dense mass atop a depression. The nerve canal in the centre of the tooth and its basal cavity that forms at birth appeared to be filled after about 2 years.

The banding appears fairly regular in both teeth, but some longitudinal minor hairline fractures are apparent at about 10 years of age in one tooth.

The annealed fracture in the tooth (×160)