A sweep with a net in most ponds will usually yield insect larvae of some description. One that is very common, but sometimes difficult to see, is the larva of Chaoborus crystallinus (De Geer), one of the phantom midges. The reason for the initial difficulty is the fact that they are almost totally transparent, but they can be quite large for a ‘microscopical’ specimen at around 10 mm long. Once identified, there is no difficulty in observing them. The larva has two pairs of air sacs which enable it to perfectly adjust its attitude in the water column. When looking for the larvae in net-tube or collecting jar, it is these that will make the creatures easily detectable. The other tell-tale is their habit of making very quick movements that catch the eye.

Part of the reason for their fast movement is that they are predators, feeding on small cladocerans or copepods which they catch with an efficient set of prehensile antennae and jaws.

The use of polarised light reveals the muscle structure of the head in this prepared slide. The difference in colour is caused by the difference in muscle fibre angle, and has no biological significance. 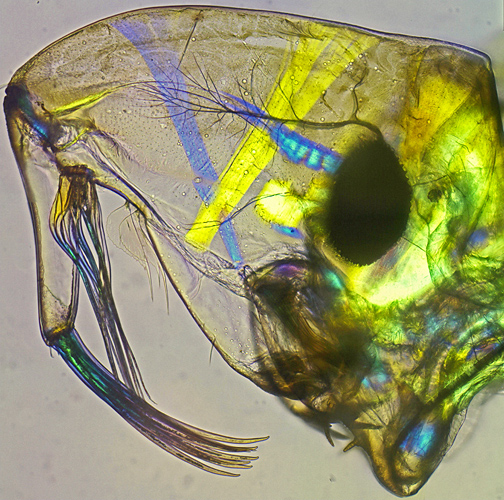 The extremely fast movements are assisted by the tail fan. 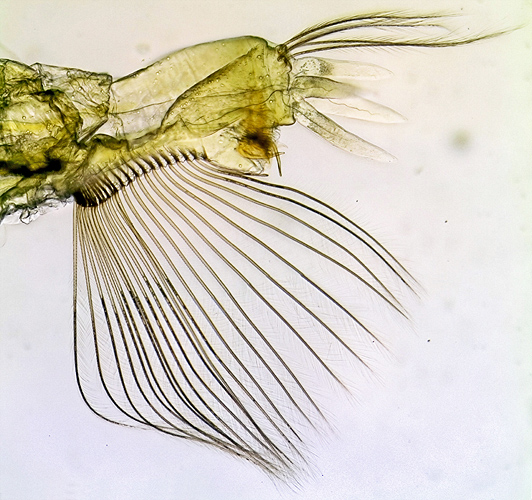 The larvae will keep very well in a small jar or aquarium if some weed is included. The weed usually carries small organisms such as copepods which provide food, so it’s not necessary to worry about feeding them. If the water temperature is kept to around 18°C, the larvae will remain apparently unchanged for quite a while – possibly a couple of weeks.  If necessary, the water level can be topped up with rain or pond water at a similar temperature. I often keep a jar of water from my garden pond with a bit of weed in it for this.

Eventually (and I still haven’t caught them doing it) the larvae will pupate. This dramatic change takes place over a matter of hours, and it seems impossible that it is the same organism – the resulting pupae bearing little resemblance to the larvae. 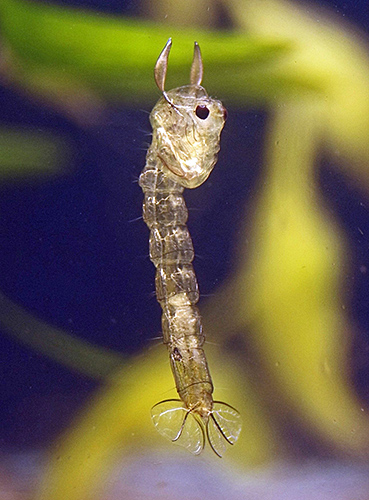 The pupae have no means of feeding, and spend most of the time hovering, perfectly balanced, in mid-water. If disturbed, however, they can still move very fast, propelled by the ‘mermaid’ tail fan and contortions of the body. Buoyancy is now controlled by the twin air sacs that look like ears.

After some time changes start to become visible in the transparency of the abdomen, and the markings around the head become much darker. This is the adult body forming inside the outer case. In this image, taken from the side, it is possible to make out the veins in the wing, which is carefully folded under the ‘chin’. A dark suture is also visible down the back of the head. This is where the case will split and allow the adult to emerge. 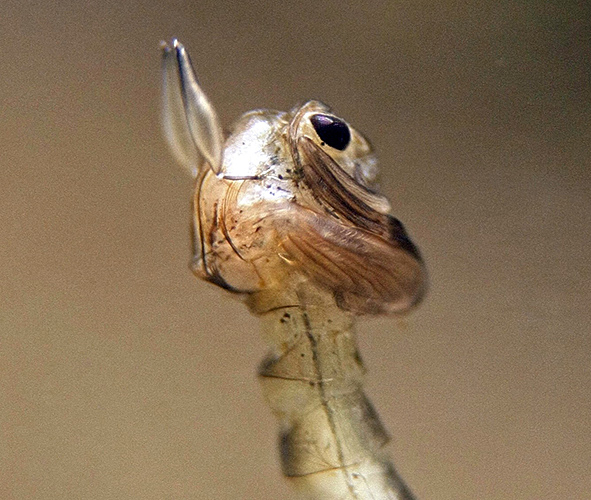 After a few days, the pupa begins to spend time just under the surface, until it finally surfaces and hatches.  This is another process that I’ve not yet caught, as it often happens overnight. I use a LED panel to provide illumination for observation and photography. This forms a lid for my small (75 mm cube) aquarium and prevents the emerging adults from escaping. With a bit of luck and patience it’s possible to obtain images without removing the top. Releasing the adults to the outside world can be tricky, but with a cautious approach a dry turkey baster will suck them up. They can then be released outside. If they do escape indoors it’s not a problem, as they don’t bite. 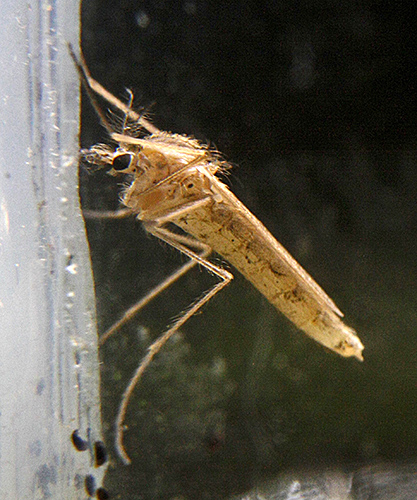 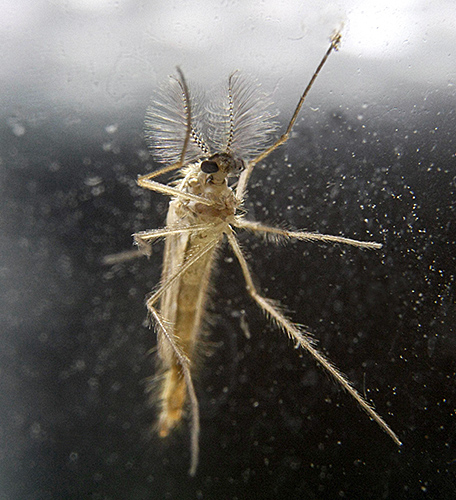 Most of the images shown here were taken using a Canon EOS 1000D camera with a macro lens or bellows attachment. Only the close-ups of the jaws, head and tail fan required the use of a microscope. Whilst I’ve used a small tank for most of the images, a Petri dish will allow good views of the larvae under a stereomicroscope and restrict their range of movement. The pupae really need to be viewed from the side, as a top view won’t show much. As they are quite visible to the naked eye, a hand lens will give decent views of specimens in a jar or tank, if the specimens remain within range. This is where a tank with a fairly restricted back to front dimension helps, but bear in mind the difficulty of cleaning afterwards.

I’ve now had two, fairly lengthy, sessions of watching and recording the development of Chaoborus, but I still don’t have the complete story. I haven’t yet identified any eggs, although I know what to look for. There are also four growth stages (instars) of the larva before reaching the size that we start with here. I’ve not yet noticed any very small larvae, but they must exist. The moments of change from larva to pupa and pupa to imago are events that will take a fair amount of luck to record, but luck and patience are prime requirements of wildlife photography. At least I can work in the comfort of my lab.