The basic materials, which I will go into more detail about later, are these:

There now comes the application of asphalt and shellac rings over a period of weeks to waterproof and protect the cell, but that is another story.

Making the wax for the cell

As a container for the wax I use an old 35 mm photographic film canister. The canister is metal and flat bottomed so that it conducts heat well and makes good contact with the hotplate. In this way the hotplate can melt the wax and warm the slide at a temperature that will not burn the fingers that handle the slide, or burn any wax that falls on the hotplate.

The cell wax is a 50:50 mixture of paraffin wax and beeswax. The exact consistency of the wax and the exact ratio used is not critical so long as the wax does not solidify too soon during the making of the cell, and does not become too soft in hot weather. Beeswax alone solidifies too quickly at safe working temperatures and paraffin wax alone is too soft.

To mix the wax I weigh equal weights of beeswax and paraffin wax into the canister and allow the wax to melt on the hotplate at a temperature just above the melting point and no higher.

The cell diameter must suit the coverslip, which will usually be 16, 19 or 22 mm in diameter.

In theory, all that should be required is to centre the cell wall on a guide circle on the ringing table that is the same diameter as the coverslip. The coverslip will then sit half way across the top of the cell.

The depth of the wax cell can be between 1 and 6 mm. It is difficult to flatten the top of shallower cells because the wax hardens too fast, and deeper cells pose viewing and storage problems.

In practice a handmade wax cell will rarely conform to theory. The aim should be to keep the cell wall vertical and thick so that the flattened top of the cell ends up being about 2 mm wide. Ideally the contact between cell and coverslip should be at least 1 mm all round, and without the coverslip overhanging the cell, to ensure a good seal that will stand the test of time.

Making the brush for the wax

A craft brush with nylon bristles will work, or a brush can be made from wood dowel and nylon fishing line. 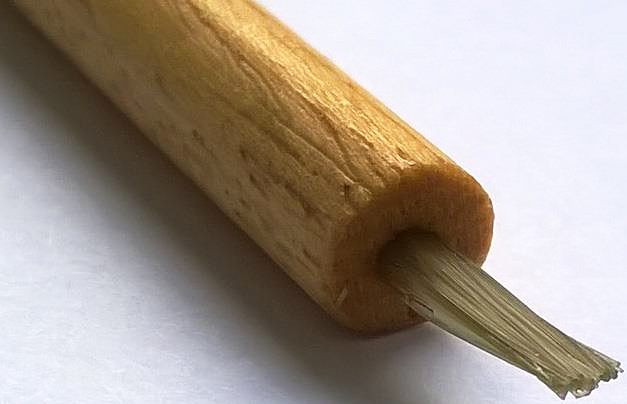 Cut a 14 cm length of 8 mm diameter dowel and a 2 metre length of 2 lb breaking strain nylon fishing line. Drill a hole 1 cm deep into one end of the dowel using a 3 mm drill. Double up the fishing line until it forms a bundle about 2 cm long, push the bundle into the hole, and trim the protruding nylon threads to 1 cm. I have not found any glue necessary. This gives a brush that will make the wax cell wall about 3 mm thick.

Stand the brush in the melted wax to warm up before use. 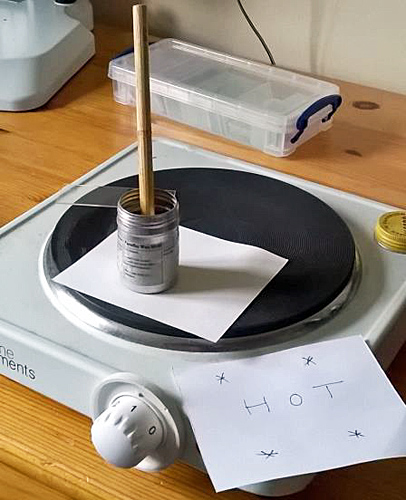 Wax container and brush warming on the hotplate

Dip the brush into the wax and touch against the edge of the wax container to remove excess wax.

Apply the brush to build the wax cell, not with a painting action, but allowing the slide to pull to the wax off the brush. A brush with a flattened profile works best, applying the wax with the flat of the brush parallel to the slide.

If we are making a aqueous fluid mount the cement must seal the water in, and the seal must be flexible so as not to stress the coverslip and cause the seal to break as temperatures fluctuate during the lifetime of the slide.

The Marson method for fluid mounts used a proprietary cement called “Clearseal”. This cement is no longer available and its exact formulation is not known. However, Richardson (2007) revealed it to be a rosin/wax type mixture with a composition approximating to rosin (colophony resin) 56 : paraffin wax 14 : toluene 30 (by weight).

I tried this formulation but found it was not as satisfactory as the original Clearseal.

I wondered if Clearseal might have been Underhill’s formula dissolved in toluene. I took his formula and added toluene in the proportion indicated by Richardson. The cement that results appears to behave very much like the original Clearseal.

In time the cement hardens as toluene evaporates. It can be reconstituted by the addition of a little toluene, warming slightly and remixing.

The method is the same as the application of Clearseal as described in the Marson method, except that the wax cells are larger and require a larger brush. I use a No. 2 brush, series 301, from Rosemary and Co Artists Brushes.

The cement should be applied to the top of the cell, except the inner edge, and down the sides of the cell onto the glass slide. If cement is applied too near the inner edge it may subsequently seeps into cell and contaminates the fluid mount.

The standard 3 × 1 inch glass slide must be thoroughly clean to ensure a good bond with the wax cell.

I soak the slides in 5% Decon® 90 for 24 hours, use a toothbrush to scrub the slides with CIF® micro particle cleaner and Ives cleaning fluid (1/3 methylated spirits, 2/3 water, a dash of Decon 90), rinse in tap water, dry with a clean cloth, and polish with a clean cotton handkerchief.

The No. 1 coverslips commonly used in high power microscopy are too fragile for these wax cells. The wax cell however are intended for low power microscopy where coverslip thickness will not be as critical. I have been using No. 1.5 coverslips, though No. 2 or 3 would give a more robust cell if they can be obtained. One coverslip on top of another may be a solution but I have not tried it.

The coverslips should be thoroughly cleaned, with the same method used for the glass slides if necessary.

Inevitably some attempts to make the wax cells will fail. Both the slide and the wax can be reused. Heat the slide on the hotplate just enough to release the wax from the slide. Wash remaining wax off the slide using cellulose thinners and clean the slides again in the usual way.

The same applies to the cold slides used to flatten the top of the cell.

These deep fluid mounts pose a problem with storage. The slides need to be stored horizontally and with sufficient clearance to avoid damage to the cell.

Conventional slide storage boxes and cabinets are too shallow to accommodate cells more than 2 mm deep.

To begin with I made spacers to separate the trays in a conventional slide box and am in the process of developing a slide cabinet with trays spaced to accommodate cells up to 6 mm in depth. I am using the same cabinet to store the slides during manufacture.

Underhill, D. (1989). Preparation and Mounting of Thin Sections and Small Whole Mounts of Rocks and Minerals for Microscopical Examination, Page 32