Petrified wood is a fossil. It forms when plant material is buried by sediment, often volcanic, and protected from decay due to oxygen and organisms. Then, as groundwater rich in dissolved solids flows through the sediment, these solids replace the original plant material with silica, calcite, pyrite, or another inorganic material such as opal. The result is a fossil of the original woody material that often exhibits preserved details of the bark, wood, and cellular structures.

The photographs were taken at Bahia Bustamante, Chubut, Patagonia and of some flakes of petrified wood found there. In the Late Jurassic period, approximately 150 million years ago, what is now Patagonia was part of Gondwana. Its climate was stable and humid and the land was covered by dense forests of enormous conifers, ancestors of the present Araucarias. Near the end of the Jurassic, the intense volcanic activity that preceded the formation of the Andes mountain range, along with strong winds loaded with ashes, buried those forests. Later rains loaded with volcanic dust penetrated the tissues of the buried trunks, replacing them with inorganic mineral matter. 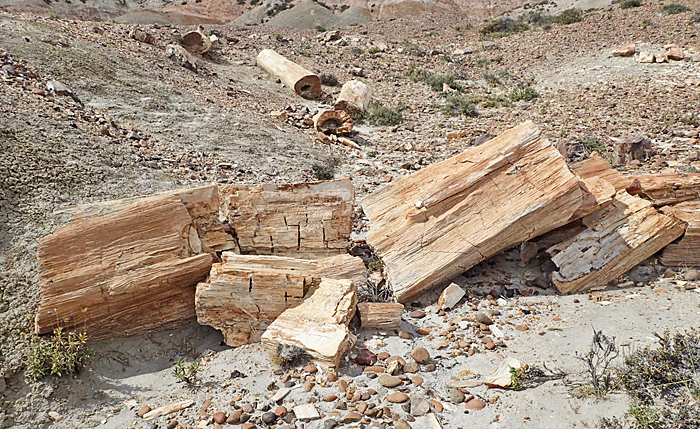 This petrified wood retains the original structure, including the growth rings. The cell walls of the wood were substituted by rock preserving its original shape, but showing the colours of the minerals. One photograph uses transmitted light in a stereomicroscope to show the cell structure visible at the thinnest part of the sample. 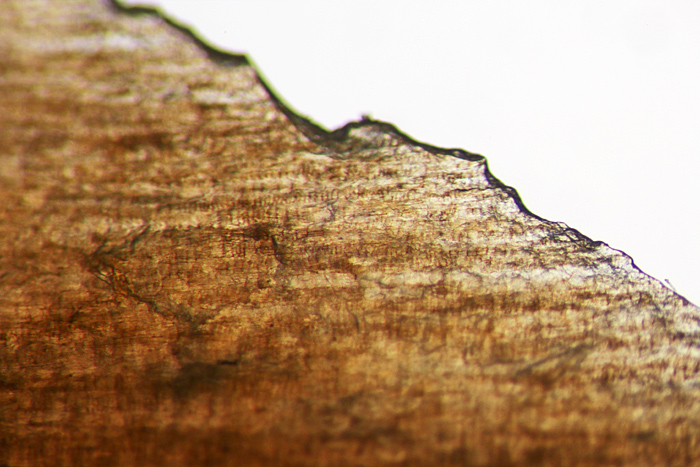 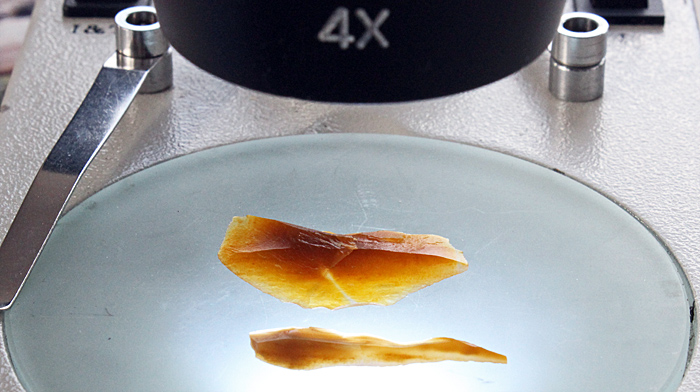 Flakes of petrified wood under a stereomicroscope

The Petrified Forest in Chubut, Patagonia is a National Monument so in that area the rock/wood may be touched but not taken. However in earlier times the indigenous tribes, the Chenques and Picaderos, used the stone to make tools and took these to the coast where they spent the winter. The fragments of petrified wood came from a spoil heap on the sea shore over 30 kilometres from the nearest forest site and show signs of having been worked to provide sharp edges.

Petrified wood is found in many parts of the world where the necessary conditions for its formation have occurred. In the UK in the past few years, winter storms have revealed forests long buried and since fossilised below the seashore at various places including Portreath in Cornwall, Borth in Ceredigion and Cleveleys in Lancashire. Other places where petrified wood may show up are in quarries, as at Portland, and on cliff ledges as near Lulworth Cove, both in Dorset.