Quekett Microscopical Club (QMC) member Jacky McPherson organised a pond-dipping experience as part of a confidence-building project for selected secondary school students. This took place in the grounds of Fairlands Farmhouse in Stevenage.  The Grade II listed Farmhouse, which has elements of architecture from 1588, is currently in need of restoration, and the project, using the neglected grounds for a community development event, is part of the move to facilitate regeneration of the site. 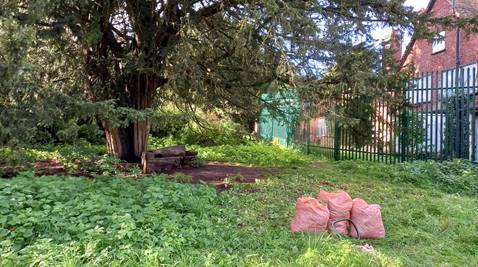 Located along the spring line, but with no visible source, the farmhouse pond does retain water throughout the year and was likely used for watering cattle even until the closure of the farm in 1968 during the development of Fairlands Valley Park.

Students were able to see the effect of biological succession at work as 10 years ago the pond was clear, but it is now heavily overgrown with Iris and Sweet Reed Grass, making the boundary obscure. 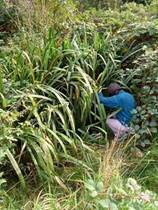 But you can see the water among the Iris leaves when you look closely. Dipping produced some interesting results that excited the children.

We started by looking at a jar containing a single water flea previously taken from the pond and preserved. This gave the students an opportunity to appreciate the scale of creatures we would be looking at. They were then shown a photomicrograph of the same tiny creature which shows much of its complex structure. 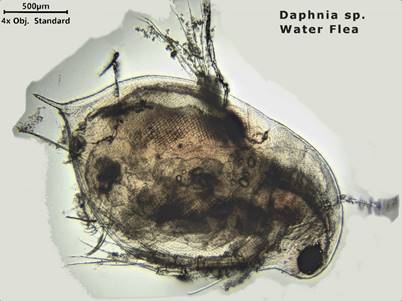 Following this, the students all took turns to dip water from the pond, emptying it into white trays where the tiny pink dots (Daphnia) could be seen whizzing around.

Laminated sheets (A4 white card, backed by A4 black card) made excellent surfaces for the children to examine the finds. With a wide mouth pipette they collected a ‘critter’ from the tray and deposited it in its blob of water in the middle of the sheet. This facilitated close examination with various hand lenses, afterwards it was returned to the tray.

Culex pupa on a white sheet 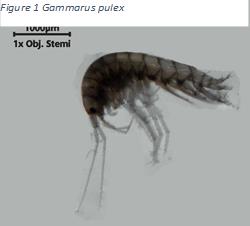 In the trays there were also plentiful fresh water shrimps (Gammarus pulex), grey in colour and easily recognised as shrimps by the children. Some of them were 2 centimetres length and swimming extremely fast.

Naturally there were questions about ‘could we eat them?’ which led to a discussion about the possible food chain in this habitat.

Also from the dips in the trays there were the numerous hog lice (Asellus aquaticus) of all sizes up to about 15 mm. These were particularly noticeable when we used a large strainer to sample the sediment and sides of the pond. The muddy contents were heaving with them and it was remarked that they were like woodlice, so we talked about the differences between water-dwelling and land-dwelling creatures.

The mud, when tipped out also yielded quite a few leeches of different sizes, and some flatworms. So they could see that although these look very similar, the way they move is quite different – the leeches changing shape and the flatworms staying on the solid surface. Although there were some small worms present, these did not excite much interest unlike the various larvae.

We were fortunate that the some of the Culex mosquitoes were larval, and others had pupated. 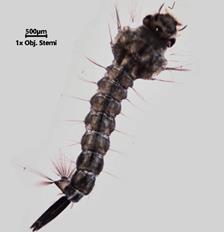 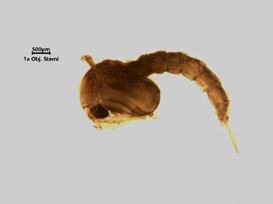 The pupae were mesmerising with erratic spinning like a Catherine wheel and two very visible horns, so different to the larvae in shape and movement. Using Collins Field Guide to Freshwater Life (R. Fitter & R. Manuel) p. 277, we could see that these were sequential life stages and what the resulting adult would look like. Here we digressed into a discussion about eggs hatching into larvae; these then need to feed and grow putting on mass and storing energy until big enough for the next extraordinary phase; that during  pupation the body organs reconfigured into the adult form, and on emerging  the adult really only had one purpose – to find a suitable place to reproduce, lay eggs and complete the cycle.

The other larva we were able to identify were Tipulids. They are very shiny, black worm-like creatures about 2 cm long, with small protuberances at the ‘head’ end. 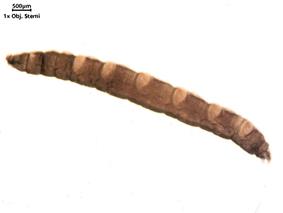 They are quite ‘escape artists’ managing to escape from the collection pots, or squirm across the examination sheet very quickly. These mature into crane flies, with which the children are quite familiar. They found it really surprising that the immature crane flies were aquatic and so active.

Each group took away a jar of the dipping to look at later in the day at the debrief, with instructions about its later disposal. Perhaps the most gratifying things were the departing comments – ‘The best thing ever’,  ‘Thanks Miss, that was brilliant’. One of the accompanying teachers said that she wished she had done something like this as a child.

The overall experience was organised by YES Futures and Fairlands Farmhouse C.I.C., local charities, and the participating students came from year 8 at John Henry Newman School. All of whom are now aware of the QMC and what we can do. And I would like to thank my friend Frances Ferrugia, an environmental biologist, for her help and advice.