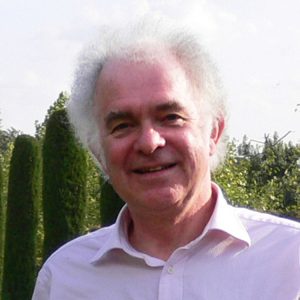 I don’t know many microscopists whose interest has been sparked by cricket. Being a keen player at school it was with delight that I found that if you occupied a bench space in the senior biology lab (which overlooked the playing fields) you could watch the cricket on summer afternoons. However, to maintain this happy position one had to put up a show of doing microscopy, and of course ensuring sufficient light was falling on the mirror necessitated remaining at the bench close to the window. During breaks in the cricket I became increasingly interested in the antics of creatures of the ponds, and conducted elementary chemotaxis experiments on some unfortunate Hydra and Euglena while still maintaining an eye on the “gentleman’s game” outside.

Euglena’s possession of chloroplasts qualified it for the botany curriculum, and my continued dabbling with it led to becoming interested in bacteria, which were then classified as plants, at least as far as the A Level syllabus was concerned. Exposure of agar plates to the air (near that window again) produced a plethora of different colony types and I taught myself methylene blue and Gram staining, and the use of the school’s oil immersion lens (not wildly successful on a Watson Kima, but good enough to see bacteria). While the zoology and botany masters were negligently assuming pupils were absorbing Grove & Newell and Lowson I was deep into Chris Collins’ Microbiological Methods.

Surrey University gave me all the microbiology I could wish for and many happy days too, even without the cricket. “Greater fleas have lesser fleas….” meant that I progressed from inverted light microscopy and cell culture to electron microscopy as I worked on avian tumour virus vaccine development at the Wellcome laboratories in Beckenham. My teacher was June Almeida, herself a self-taught and brilliant electron microscopist to whom I shall remain forever grateful. Her maxim for the correct transparency of a virus preparation ready for EM examination was that if it was clear like a gin and tonic then it was probably right. I have never lost my fascination with viruses and in the 1970s took up a lecturing post in virology in the newly created, dynamic and young Biology Department at (the then) Sunderland Polytechnic. The 1970s and early 80s were good times for the ‘polys’ but in 1982 many were offered the chance to become universities and, unable to resist the cachet, began a headlong unequal scramble for funding which cast them as second class universities, a description from which it took them a long time to recover.

In 1978 I became interested in water-borne enteropathogenic viruses which although not a primary cause of person-to-person disease transmission nevertheless reflect the virus burden in a population and have been associated with significant disease outbreaks. Water virology came into its own in 2020 when sewage monitoring for SARS-Cov2 showed that detection in wastewater is a predictor for Covid-19 outbreaks in a community.

I stayed with virology after trying to retire in 2004 and moved to Aberystwyth University to manage two highly enjoyable EU Framework projects over ten years working towards water quality regulations for waterborne viruses. This meant hanging up the white coat, as a consequence of which I needed a practical challenge so resumed microscopy, having acquired two Zeiss Universals and a Leitz Dialux, plus various others – of course. My interest in trees has led to my ‘collecting’ them photographically and microscopically, and my current challenge is to prepare a collection of root, stem and leaf sections from a range of broadleaf trees and produce an album of green beauty. And I still love cricket.