Home | About the Club | Meeting reports | Microscopium – The Microscopists’ Fair

The usual venue for the Quekett’s annual sale of microscopes and related items in St Albans is too small to allow for the social distancing that is part of Covid-19 precautions, and most members prefer a Saturday, so this year we moved again, to Letchworth Settlement. As always, Microscopium provided members and visitors with a good opportunity to dispose of surplus items and to acquire new kit, and also provided an excellent opportunity to meet old friends, make new friends, and gossip over tea and coffee and over lunch. A train strike and the cost of petrol may have kept some people away, but we still had a good crowd of buyers. One student came all the way from Sweden so that he could meet some of the Club’s photomicrographers.

We filled the main room, Kincaid Hall, with tables, and needed to overflow across the yard into the Spinks Room. 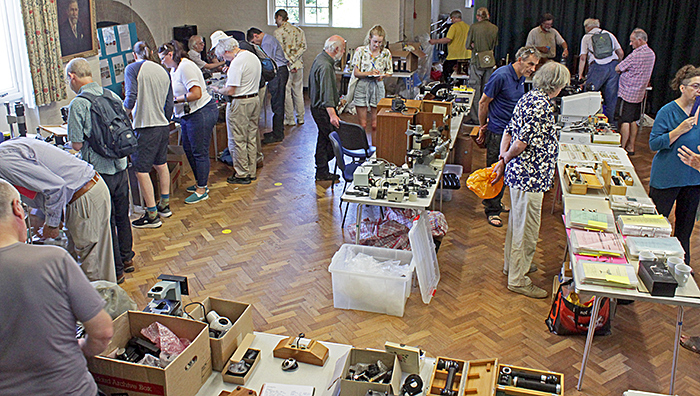 As usual, many used microscopes, lenses, accessories, slides, books, etcetera were offered at reasonable prices for the benefit of amateur microscopists. These items, and any items that are given away, must NOT be subsequently sold on eBay at great profit, and anyone found doing so will not be welcome at future meetings.

You never know what to expect at Microscopium, but we were amazed to see three Vickers M41 Photoplans and four shearing eyepieces. There was a selection of trinocular compound microscopes, three microscopes with phase contrast, and a compound microscope with reflected light Nomarski.

Lisa and Nigel Ashby were selling lots of brochures, prepared slides at 10 for £1, a Lomo PA-7 drawing tube, and a Vickers shearing eyepiece. For those who did not bring a fan, Lisa suggested buying and folding a brochure. 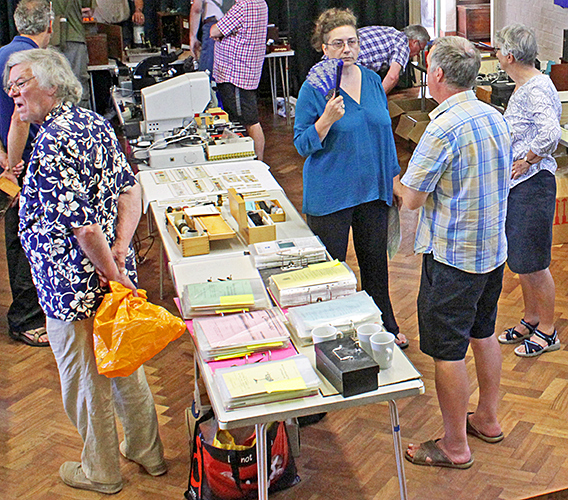 Mark Berry was selling lots of items from G&M Tools, including a trinocular Leitz Ortholux for reflected light, a Union Optical microprojector, some shearing eyepieces, an AO Cycloptic stereomicroscope, a B&L Nicholas illuminator, and a trinocular adapter for a B&L Stereozoom 7 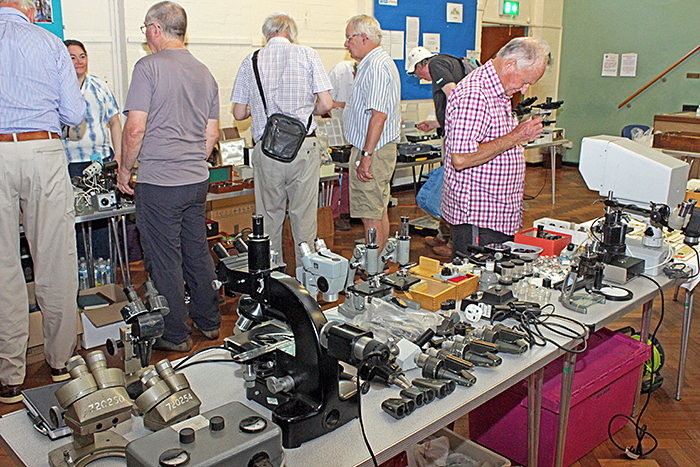 Mark Berry and his table 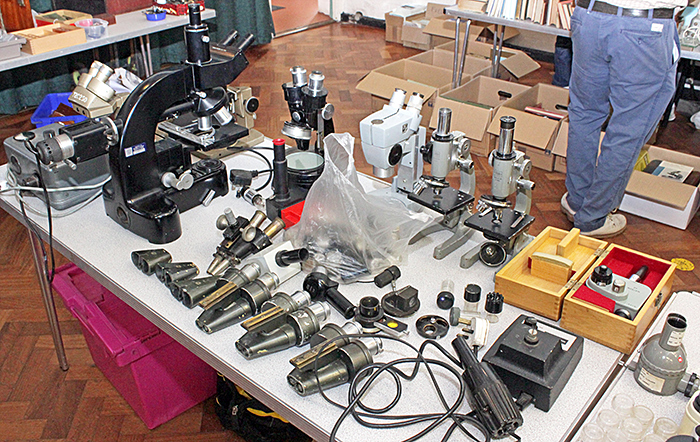 Joan Bingley was selling a white Cambridge rocking microtome, a Watson Service in its wooden box, a Manfrotto tripod, several books and cases, and a box full of other items. 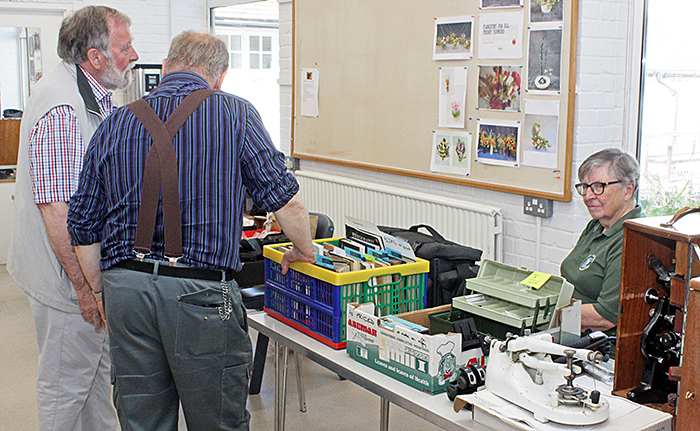 Gordon Brown had several microscope parts for sale, but was mainly looking for microscopes for members of the new Anglian Microscopy Group. He bought or was given 11 microscopes for Anglian members, and lots of other stuff. Now he has to check, repair and adjust the instruments. 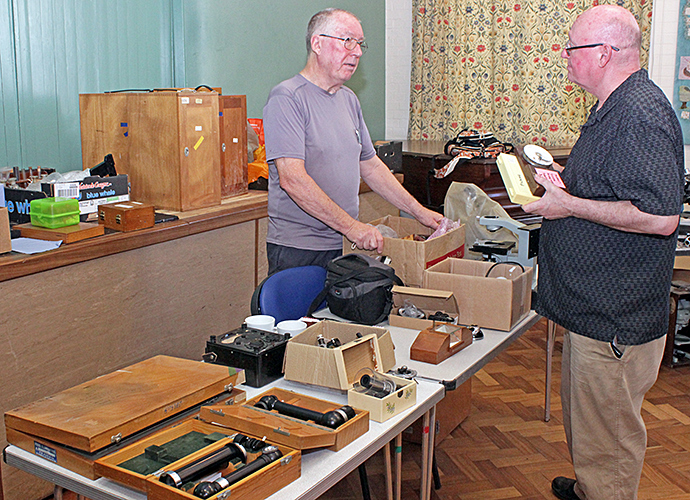 Gordon Brown (centre) with a visitor

Trevor Emmett brought lots of geological thin sections for sale, including a full slide cabinet, several sections of blueschist and olivine-gabbro, and a box of other rocks. 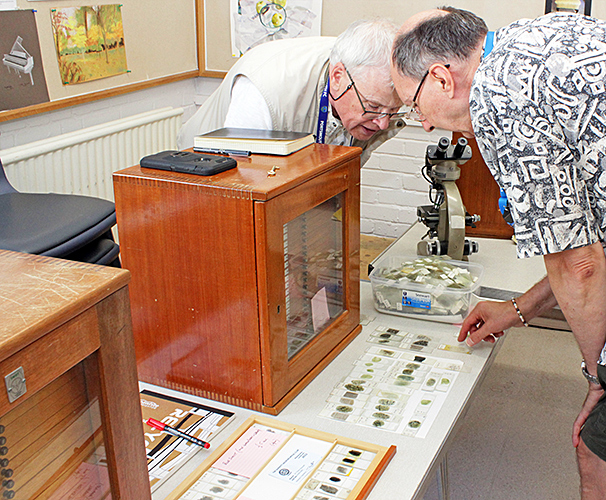 Phil Greaves was selling lots of microscopes and accessories on behalf of the Freshwater Biological Association, including a trinocular Nikon M inverted, a trinocular Leitz Laborlux, a trinocular Olympus IMT inverted, an Olympus BH with plan objectives, a Vickers Patholux, a Vickers M41 Photoplan, a Reichert Neozet, a Reichert Mak stereomicroscope, and a few inverted microscopes. Phil also had trays of accessories for CTS, Leitz, Nikon, Olympus, Vickers, Watson, Wild and Zeiss microscopes, various other accessories, and several boxes of slides. He was also giving away card and wooden slide boxes, and other wooden boxes. 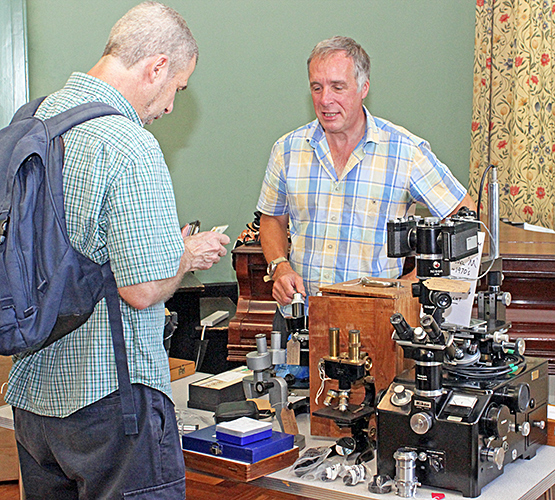 Phil Greaves (centre) with a visitor and the Nikon M inverted 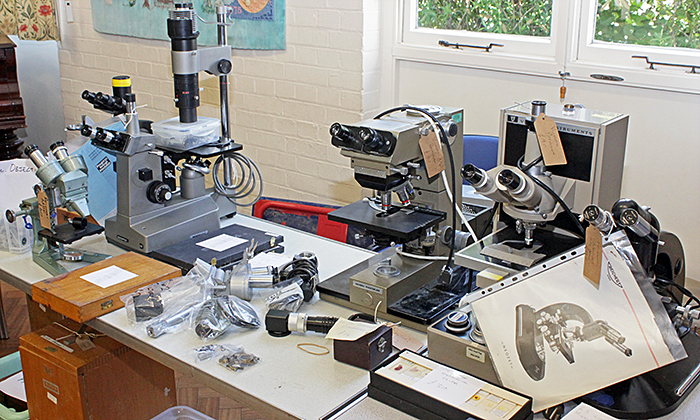 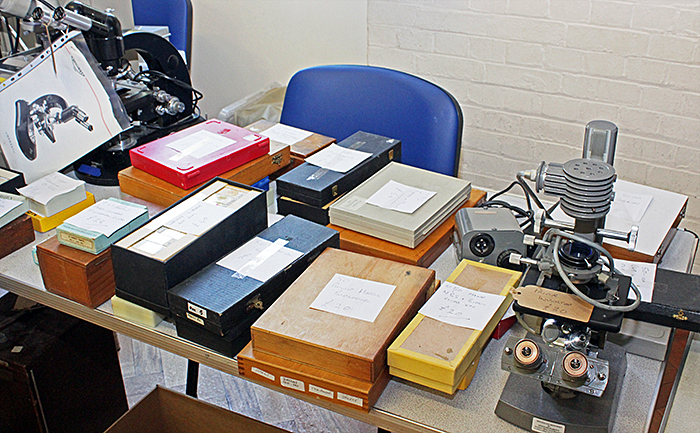 Pam Hamer brought the microscopes that Derek Stevens bequeathed to the Quekett, to be either kept or sold. They included a Lomo МБС-10 stereomicroscope with its transmitted-light base, a binocular Zeiss Jena with phase contrast, a trinocular Vickers, a metallurgical Vickers and a polarising Vickers. 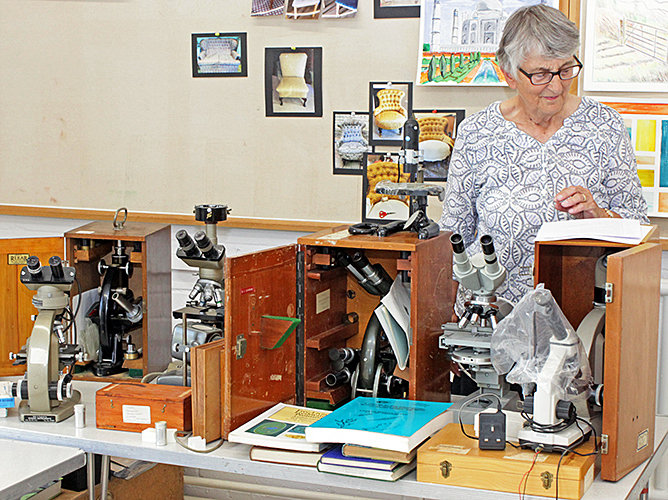 Harold Hillman’s family (son Benedict, daughter Rachel and her husband David Marantz) were selling the his remaining microscopes, accessories, slides and books, including a Zeiss Photomicroscope, a Vickers Biolux, a Nikon trinocular head, transformers and lamps. They were giving away slide trays, containers and other small items. 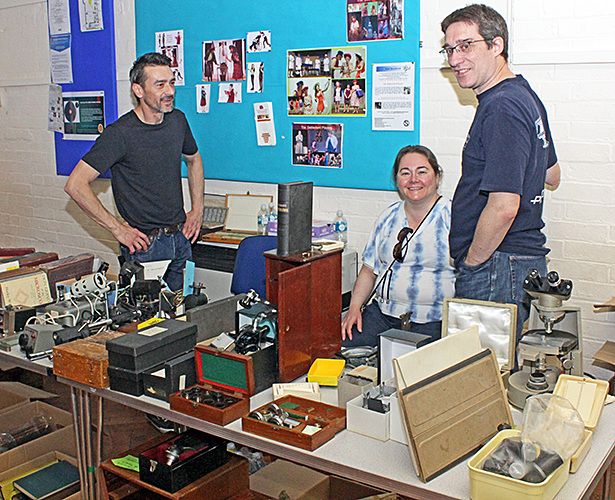 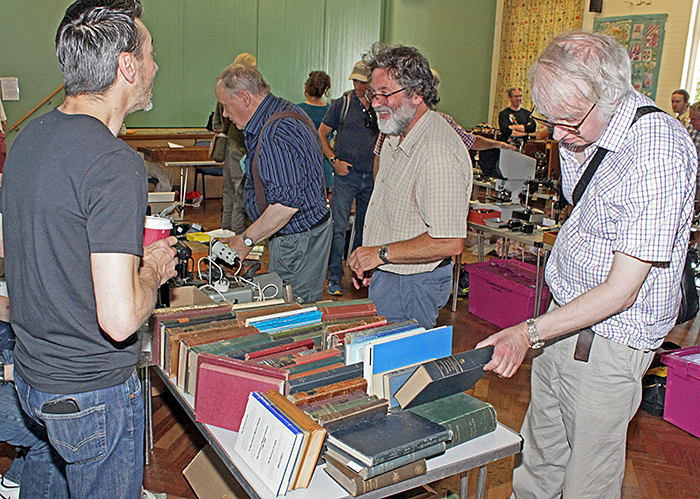 The prepared slides included a box of histology slides with the edges of the coverslips sealed and decorated by hand. If anyone knows who made these slides, please let us know (Mura is the manufacturer of the labels, not the mounter). 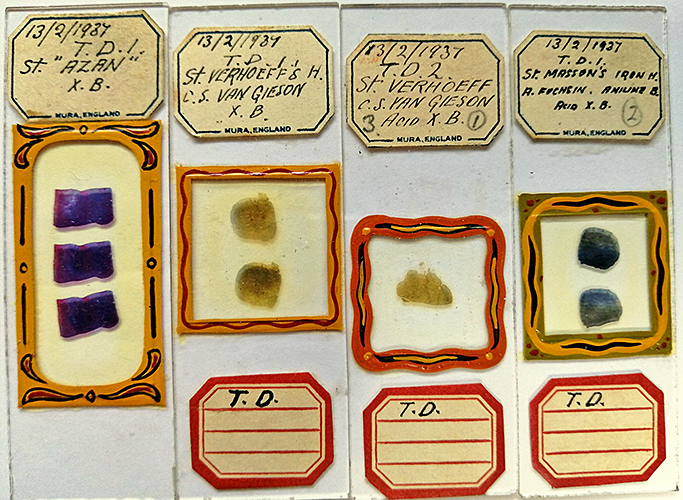 John Millham had some impressive microscopes for sale, including a trinocular Leitz Orthoplan, a trinocular Leitz Laborlux S, an Olympus BX40, a Nikon Eclipse E400 with a tilting head, polariser and analyser, a trinocular Wild M5A on a transmitted-light base, and an Olympus SZ4045 on a pole stand. He also had lots of eyepieces, objectives and small accessories. Several of the microscopes are still available, so if you are interested please contact John Millham. 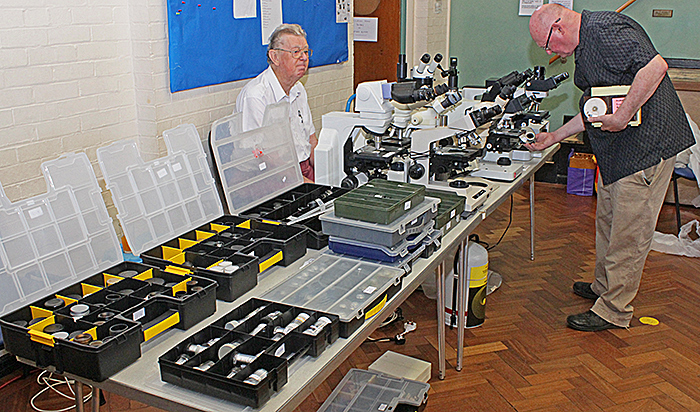 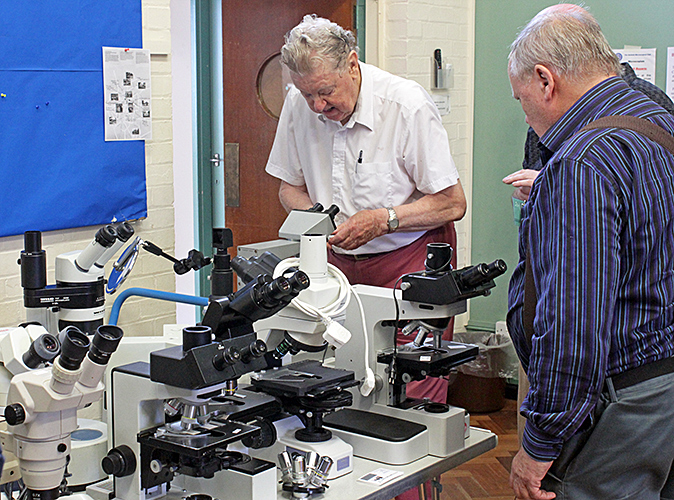 Brian Norman was showing the mounting cabinet by Charles Collins that has recently been discussed in the QuekettMicro Facebook Group. 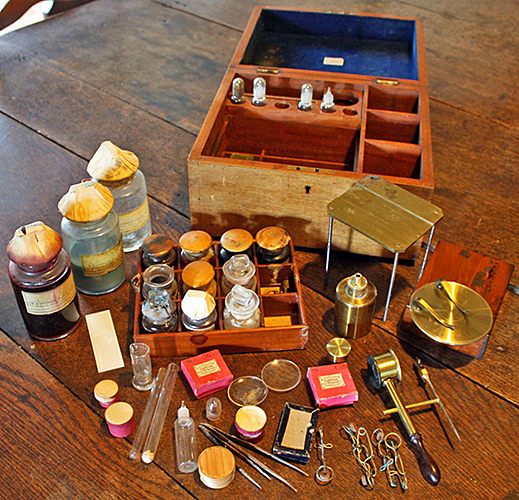 Brian was selling a Philip Harris microprojector, a camera lucida, some brass microscopes and objectives, assorted microscope parts, some slides and a few books. 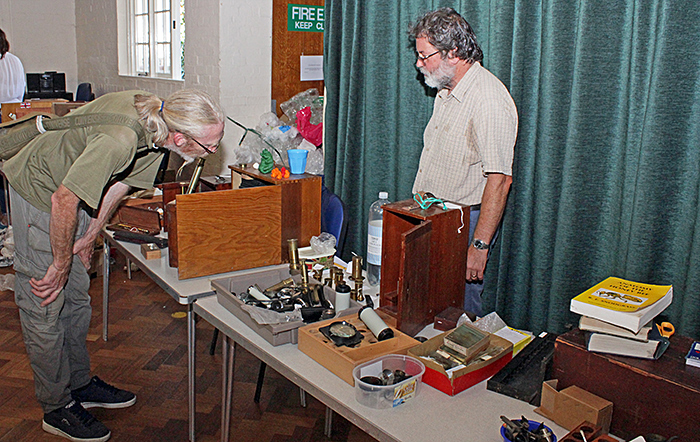 Stephen Parker was selling a portable Lomo microscope in its grey metal case, a student microscope, some boxes of prepared slides, and various microscope parts. 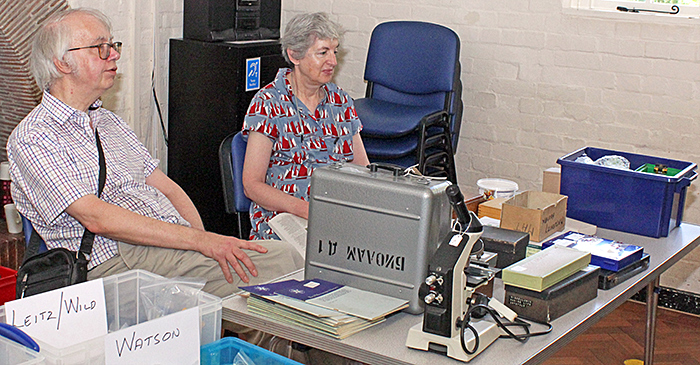 Stephen Parker and his wife 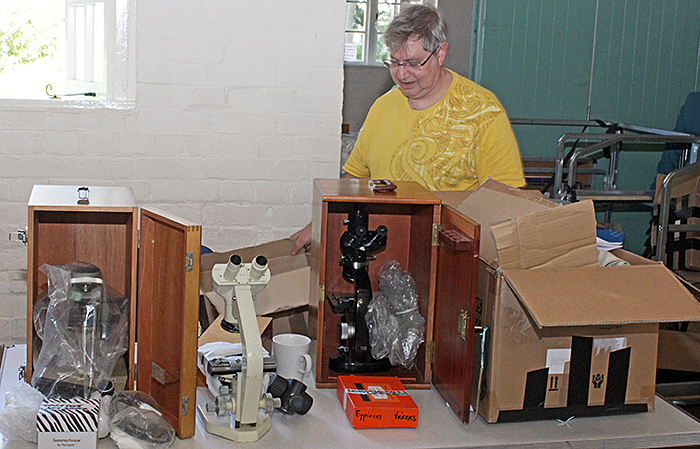 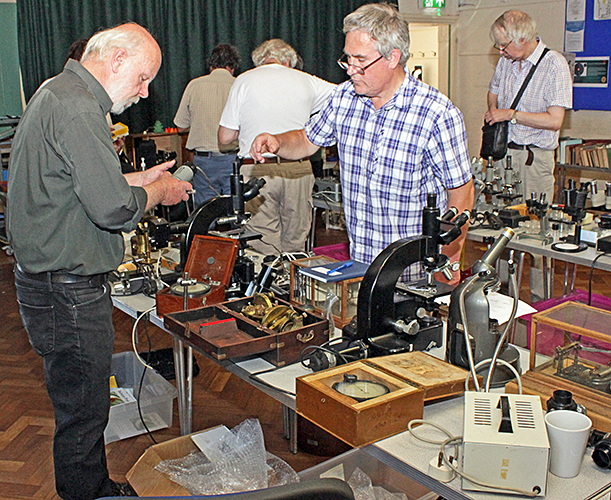 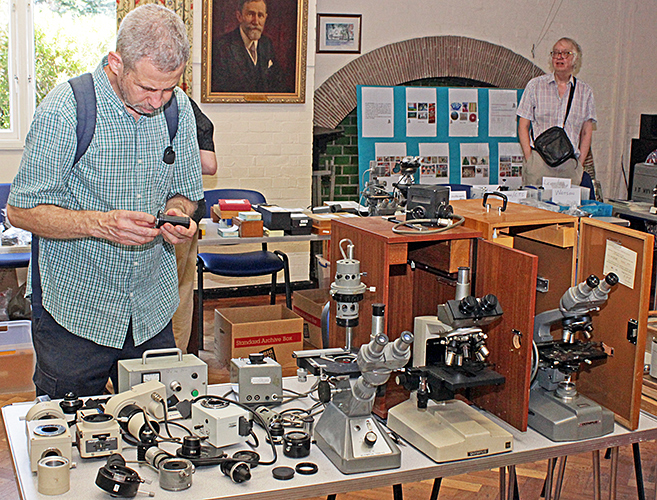 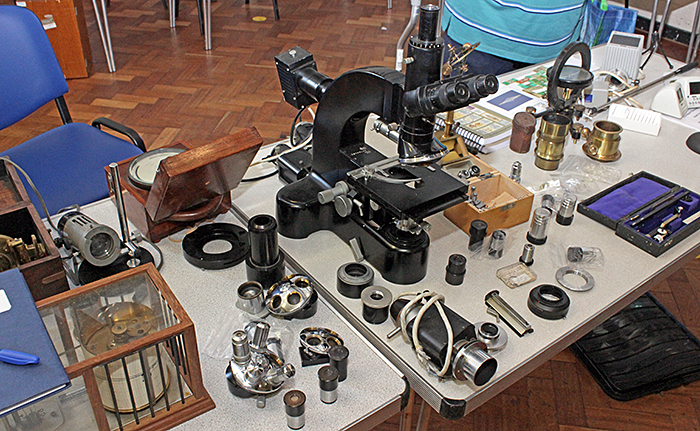 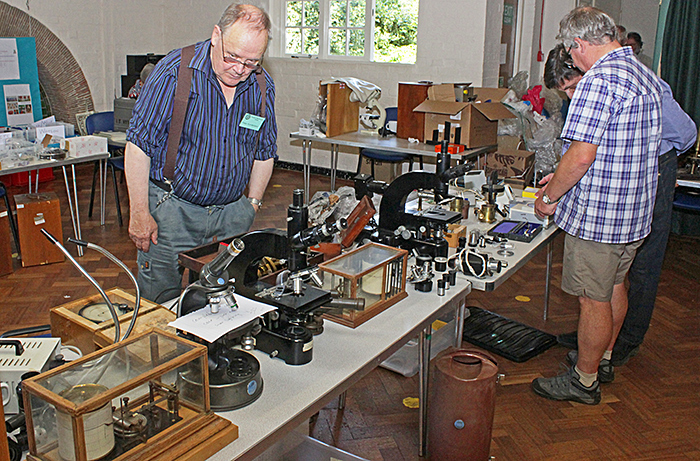 They were also selling new copies of Mounting, a 2-volume collection of papers by Ernie Ives.

Mark Shephard was selling a binocular Cooke, Troughton & Simms (CTS) phase contrast microscope with its power supply and extra lenses and attachments, in its wooden case, and several sets of slides.

Helena Smallman-Smith was selling equipment that had belonged to her late father (a professor of histology), including a Vickers M41 Photoplan, a few other microscopes and stands, and an enormous lamphouse. 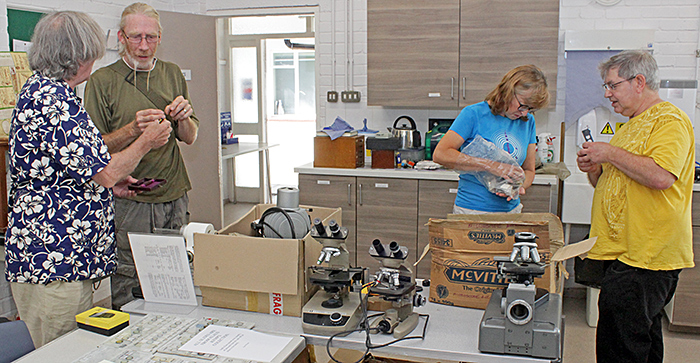 Nigel Williams was selling lots of slides made by the late Klaus Kemp as well as other slides from Klaus’s collection, with all proceeds going to Klaus’s family. 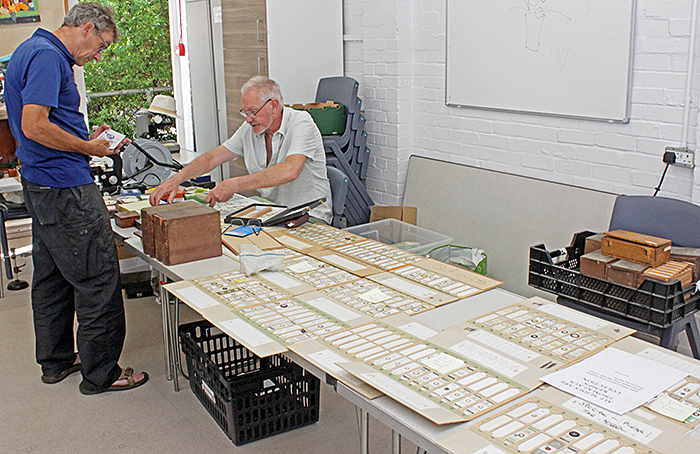 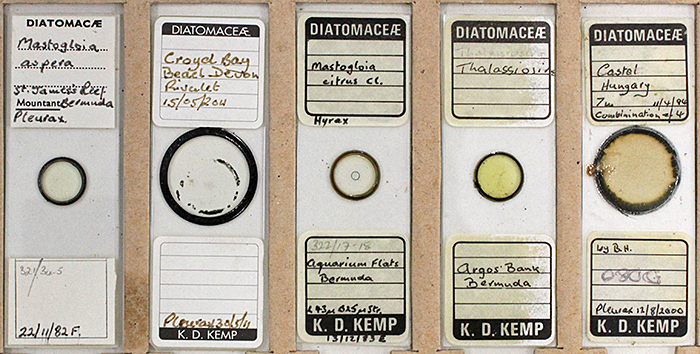 Some of Klaus Kemp’s slides

Some of Klaus Kemp’s slides

Our thanks to Mark Shephard, Stephen Parker and Lisa Ashby for successfully organising Microscopium at another new venue, with some very happy buyers and sellers, and to those who put out and packed away the tables and chairs.