This was the first of a series of full-day meetings in the Home Counties that we hope will encourage more members to attend face-to-face events. It was held in Brookwood Memorial Hall in Surrey, the venue where several excursions have been held. The hall has a kitchen where tea, coffee and biscuits were available all day. The morning session consisted of three presentations that were recorded and also broadcast live via Zoom.

Nigel Williams told us about his collection of microscope slides, many of which came from eBay, and showed us some of his favourites. He buy slides because he likes them, or they are not too expensive, or they show the beauty of nature, or they are by well-known mounters, or they are of scientific importance, or because they are nice colours. He showed us slides by Carel Sartory, John Ford, Brian Darnton, George Wilks, Fred East, Ernie Ives, Colin Kirk,  Klaus Kemp and others. Some slides have just the initials of the mounter, so Nigel tries to identify them using Microscopical mounts and mounters by Brian Bracegirdle and websites.

Quekett members can watch a recording of Nigel’s talk.

Phil Greaves told us about Thomas Henry Huxley, who came from a humble beginning, managed to qualify as a doctor, and was appointed Assistant Surgeon on H.M.S. Rattlesnake on its voyage to survey the east coast of Australia and map a safe passage between the coast and the Great Barrier Reef. After returning to England, his career included Professor of Natural History at Royal School of Mines, Fullerian Professor at Royal Institution and Hunterian Professor at Royal College of Surgeons. He was President of the Quekett in 1878 and he played an active role in meetings. At one meeting, Professor Huxley described a dissecting microscope that could be converted into a compound microscope. Phil has one of these and showed us photographs of it and descriptions from catalogues. 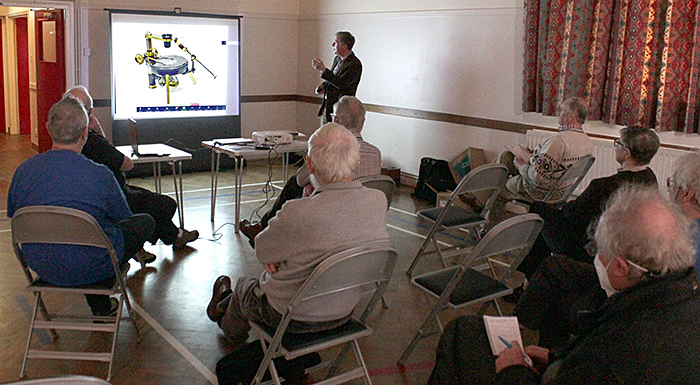 Quekett members can watch a recording of Phil’s talk.

Mark Berry has a part-buried bowl in his garden that he allows to accumulate debris and keeps topped up with rainwater.  It provides all sorts of specimens for Mark to examine, and he recently found a ciliated protozoon that he was unable to identify.  He showed us his description, drawings and a photograph but nobody in the room recognised it. Then Tony Pattinson, who was participating via Zoom, recognised it as species of Caenomorpha. 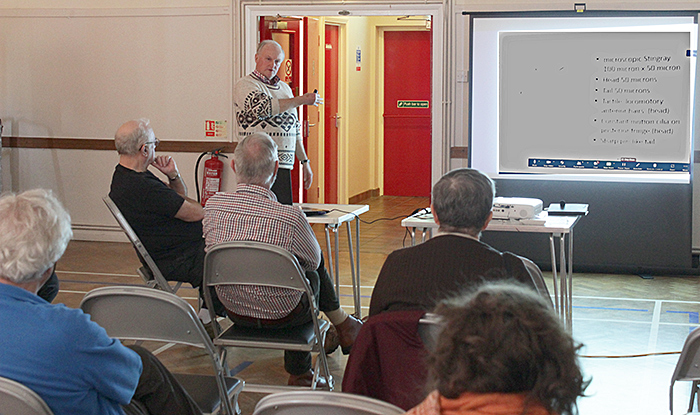 You can watch a recording of Mark’s request here: 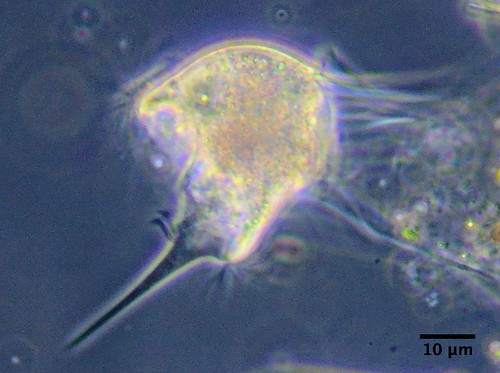 In the discussion that followed, suggestions for containers to part bury in the garden included desiccators (with or without the perforated zinc separator) and the smaller but similar readymeal containers for Pad Thai or Nasi Goreng from Waitrose that have a perforated plastic separator.

After a break for lunch, the chairs and table were re-arranged for a gossip meeting.

Nigel Ashby showed a couple of Watson microscopes, one of which was a prototype of the Universal Service microscope; it is engraved PROTOTYPE. 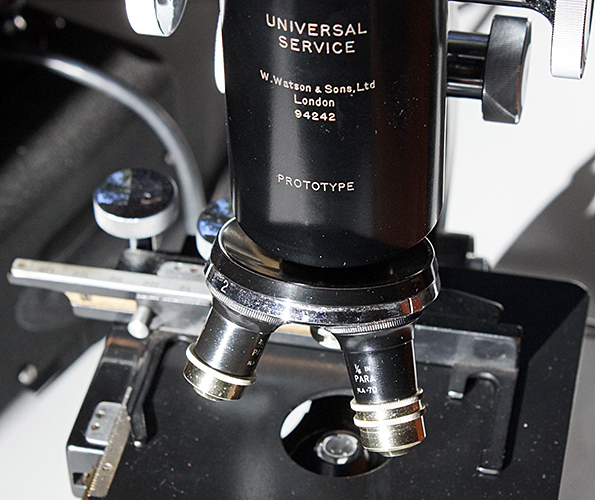 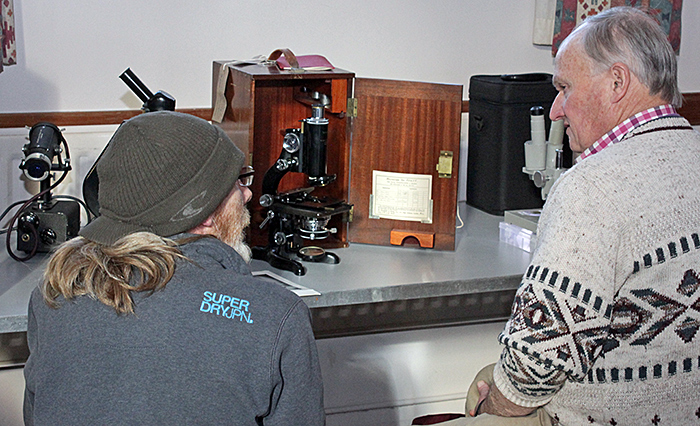 Mark Berry has a part-buried bowl in his garden that he allows to accumulate debris and keeps topped up with rainwater. He brought a sample that we could examine using his Lomo microscope or via an eyepiece camera on his laptop. The specimens included Spirostomum, an active and unusually large ciliate. 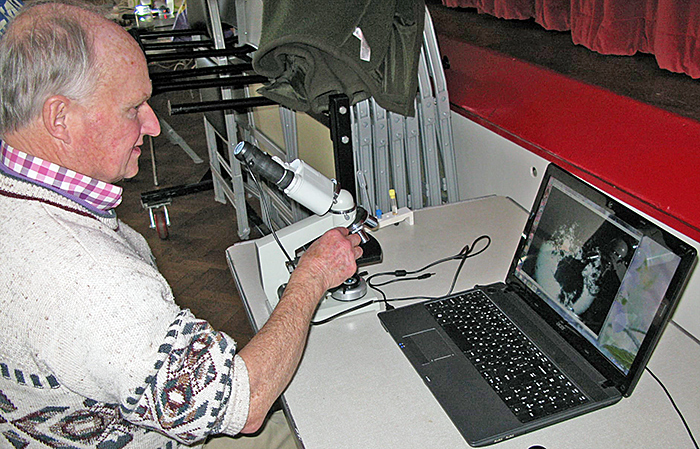 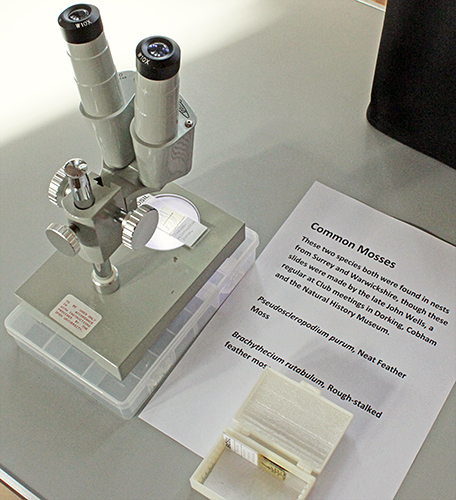 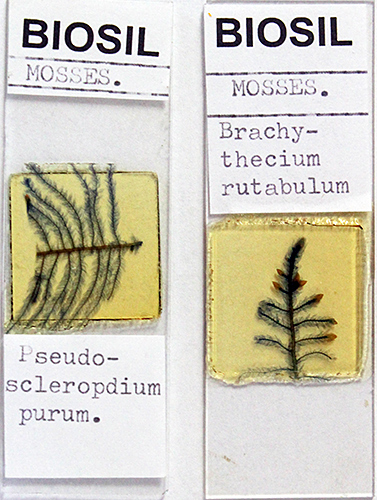 Joan and Graham are looking for volunteers to participate in the Club’s latest citizen science project, identifying the components and invertebrate inhabitants of birds’ nests. 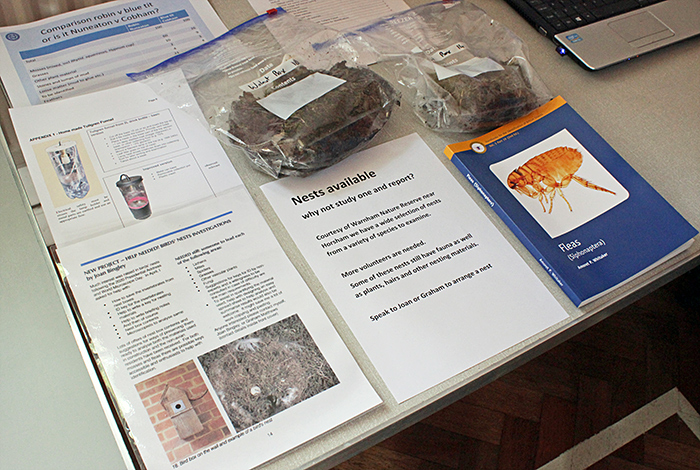 Graham Matthews used a Baker school microscope (converted to battery-powered LED) with an afocally-coupled Canon EOS 500 to show slides of mites and fleas from bird nests on his laptop computer. 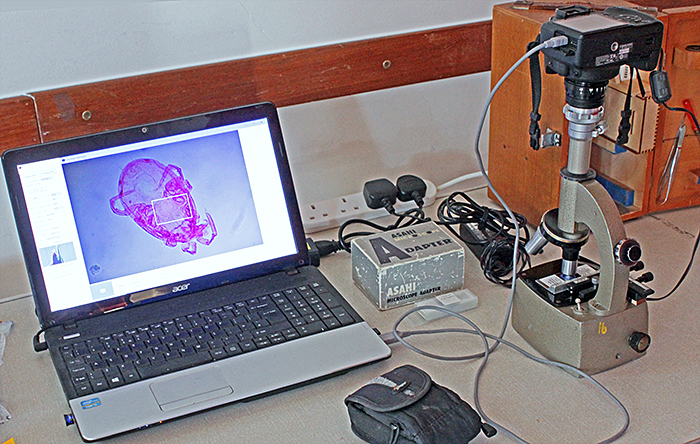 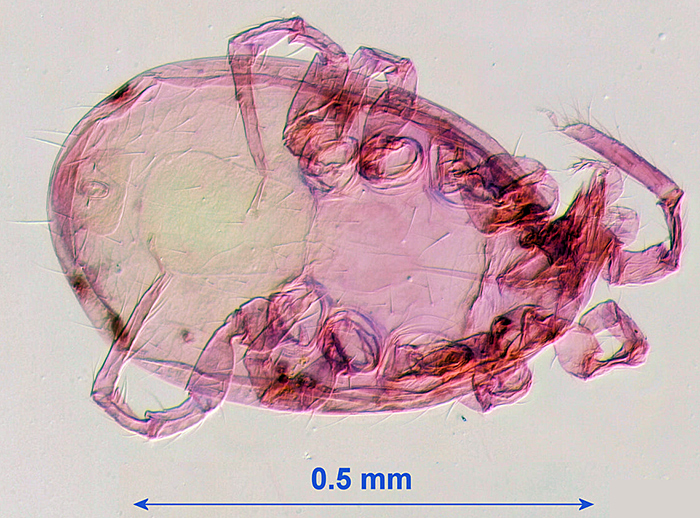 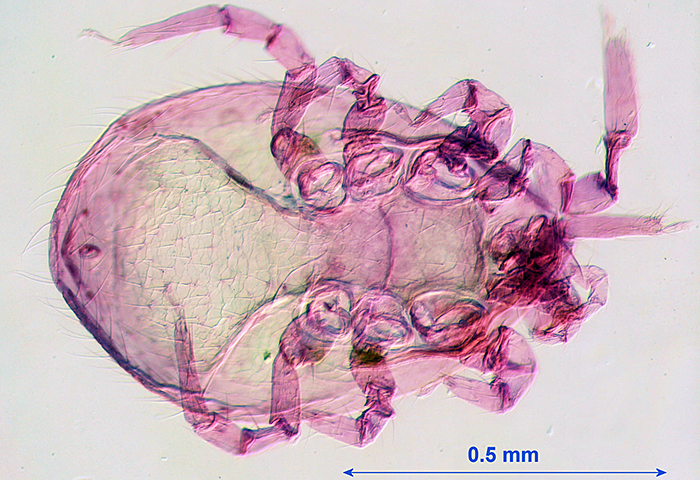 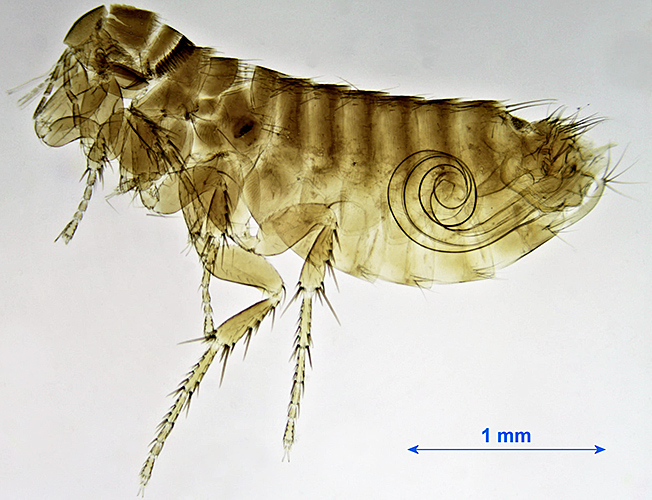 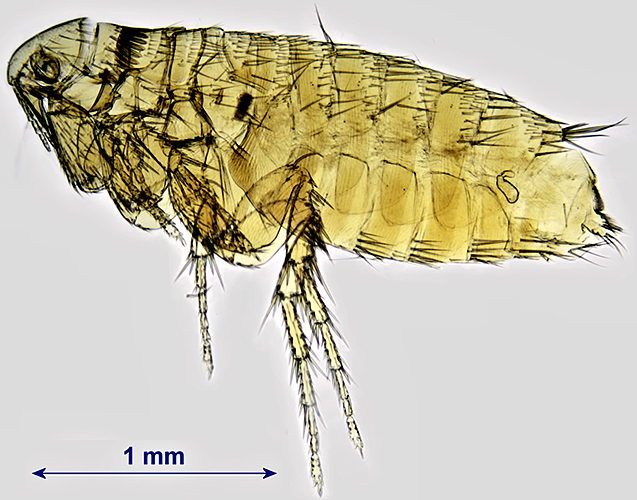 Phil Greaves brought the dissecting microscope designed by Thomas Henry Huxley that was featured in his talk in the morning. It was complete with the three low-power objectives, the body tube for converting it to a compound microscope, and its wooden case. 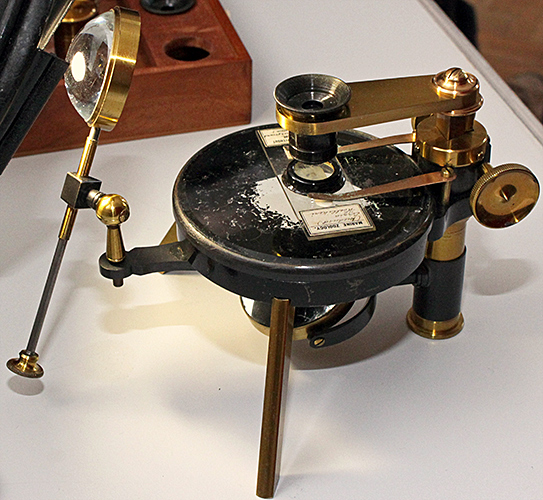 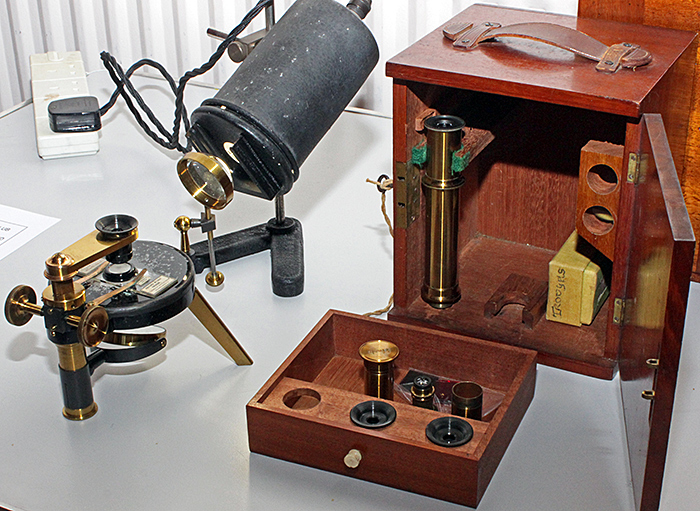 Robert Ratford often brings something large and/or heavy, and this time it was the circular base from a Zeiss lamp, fitted with a vertical pole and a boom arm holding a binocular stereomicroscope. Illumination was provided by two Tuulkit rechargeable LED lamps with a magnetic base and rotatable head. Robert first showed some waterfleas, and later collected some ferns, leaves and mosses from the garden of the hall. 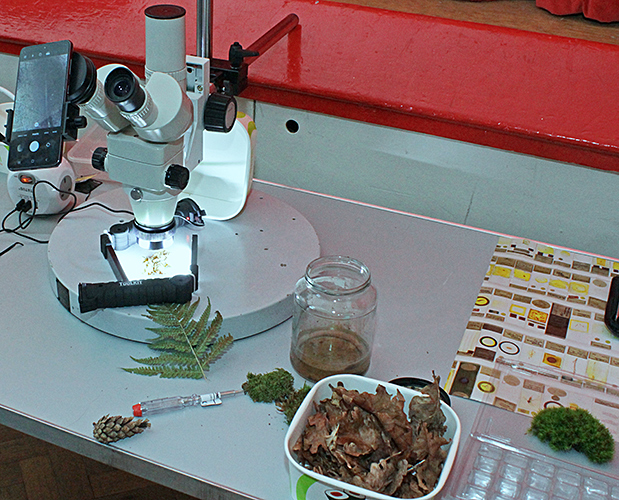 Robert also showed a set of small tools that he uses for manipulating small specimens. They are available on eBay and Amazon and are sold for removing blackheads, popping pimples, etcetera. 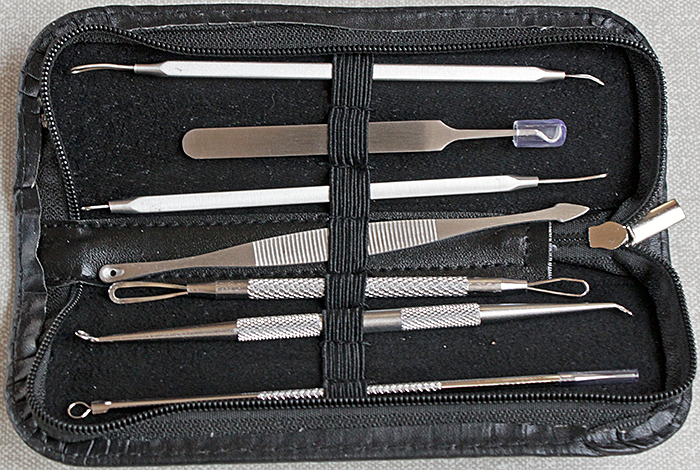 Set of tools for manipulating specimens

Nigel Williams used his Olympus SZ stereomicroscope to show an exhibition circle of 1050 diatoms made by Klaus Kemp in 1994. The dark-ground illumination was provided by an upturned LED ringlight below a stage plate with a central hole to reduce stray light. 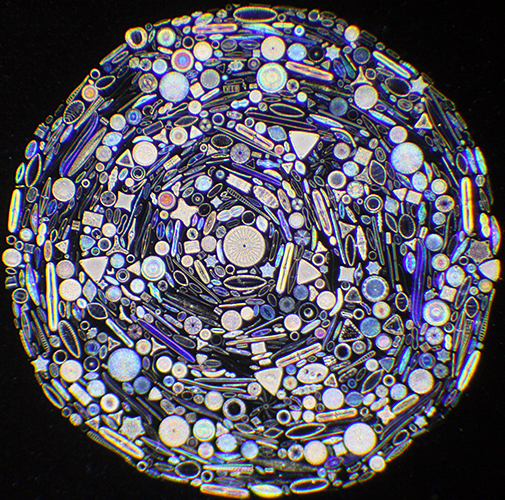 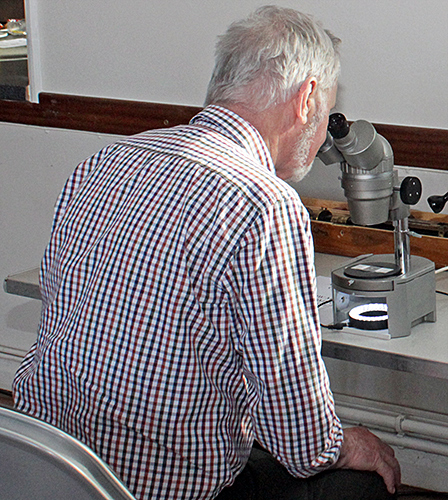 Alan Wood has been experimenting with an afocal arrangement for photographing slides at meetings, using a Leitz Periplan 10× eyepiece that has a 28mm thread (originally for a rubber eyecup) that makes it easy to attach to the filter thread of a camera lens. 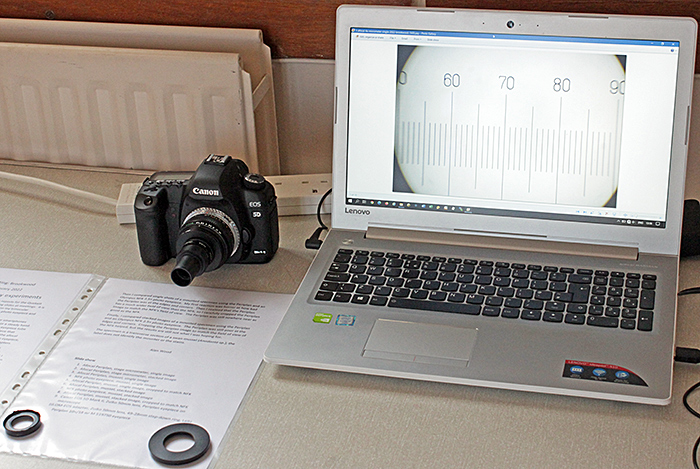 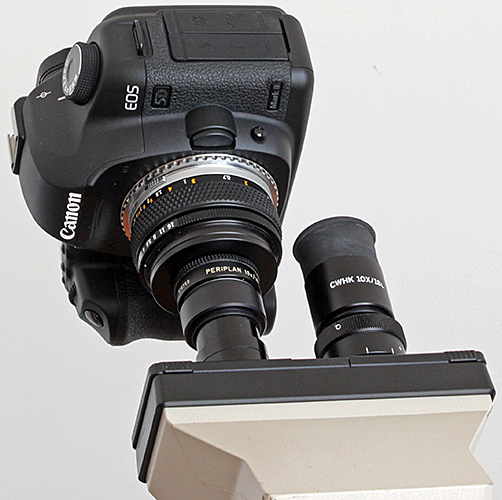 Alan prepared a PowerPoint presentation to show images of a stage micrometer and a section of a swan mussel that he used to compare an afocal arrangement using a Periplan 519750 with a conventional setup using an NFK 2.5× photo eyepiece:

The Quekett Shop was there too, selling books, ties and USB drives with the archive of the Quekett Journal of Microscopy 1868–2012, and giving away leaflets. 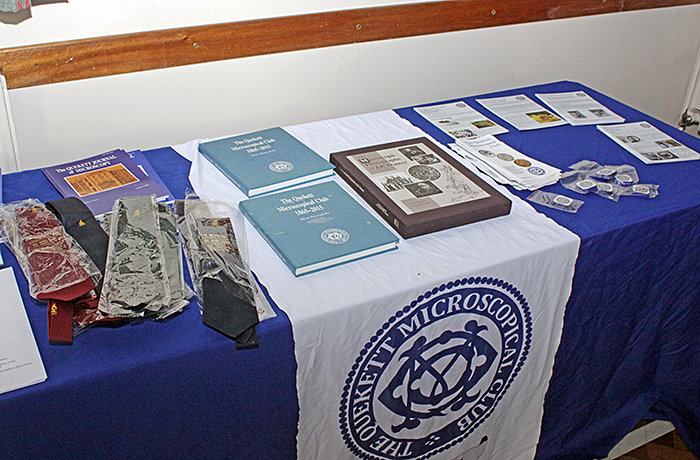 Our thanks to Joan Bingley for arranging refreshments, to Nigel Williams and Phil Greaves for their entertaining and informative talks, to everyone who brought an exhibit for the gossip, to Paul Smith for handling the Zoom broadcast, and to the people who got out and put away the tables and chairs.