The 155th Annual General Meeting of the Quekett Microscopical Club was held in the Angela Marmont Centre in the Natural History Museum and also live via Zoom so that members who were unable to attend in person were able to participate.

Watch a video of the AGM (members only)

The Annual Report, the Treasurers Report and the Accounts for 2021 are available under the  Downloads menu (members only).

The President, Steve Gill, opened the meeting via Zoom and then handed over to the Hon. Secretary, Lisa Ashby, to present the annual report. 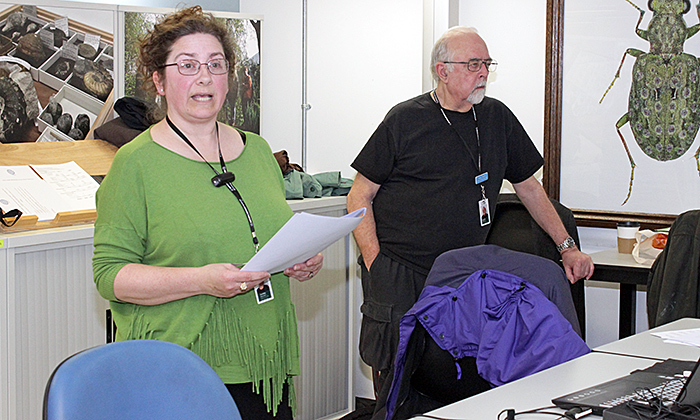 The Hon. Treasurer, Stephen Parker, then presented the accounts for 2021 and reported on the Club’s healthy financial status. 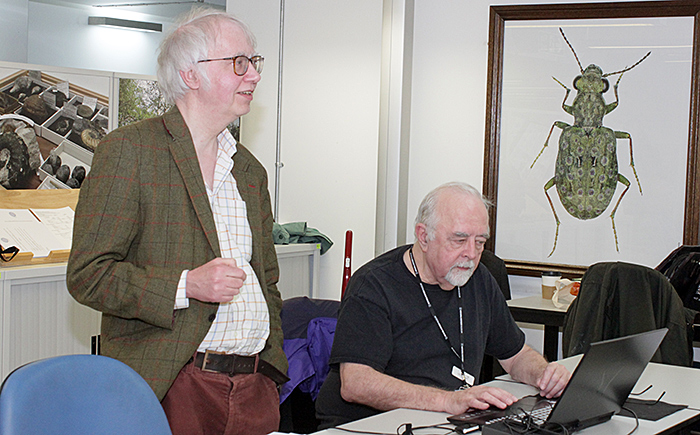 As a result of the election, the members of the committee who will serve until the AGM in 2023 are:

The following office holders are ex-officio members of the Committee:

With the formal business completed, refreshments were provided and some gossip exhibits were set out.

Lisa Ashby showed a McArthur microscope that came in a mixed lot on eBay that included a children’s microscope. Inside the box was a data sheet showing a special price of £8-00 including P+P for Quekett members. Lisa has removed the wires for the external battery pack so that a mobile phone lays flat on top of the microscope. 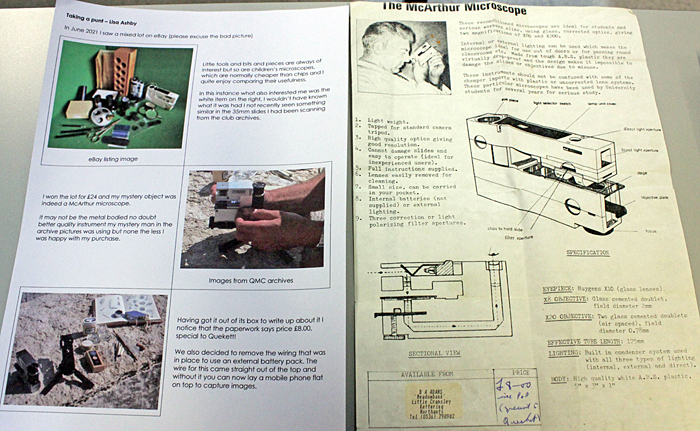 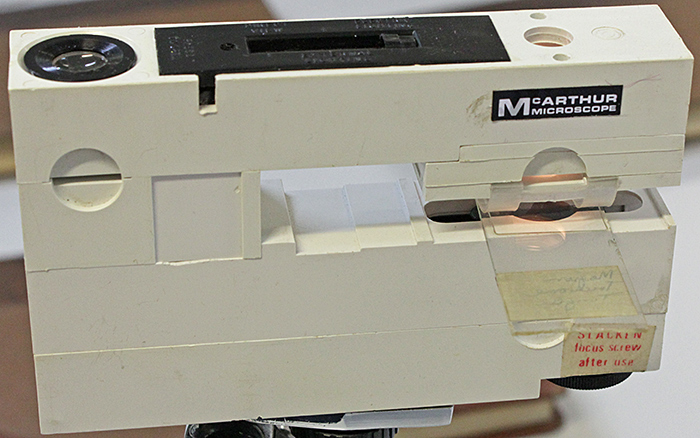 Nigel Ashby won an auction for a brass hydrometer, which he bid for because the lot included several brass objectives in Watson canisters. When the lot arrived, it also included two wooden boxes that had not been mentioned and that contained several blank microscope slides, 5 oversized slides with faded labels, a nice stained tongue section, a microphotograph of The Lord’s Prayer, a microphotograph of Head of Christ, and a Webb engraving “Soft Answer”. 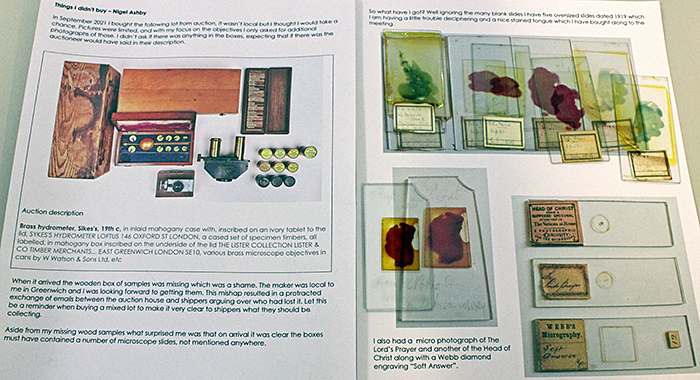 Joan Bingley filled a table with her exhibit. 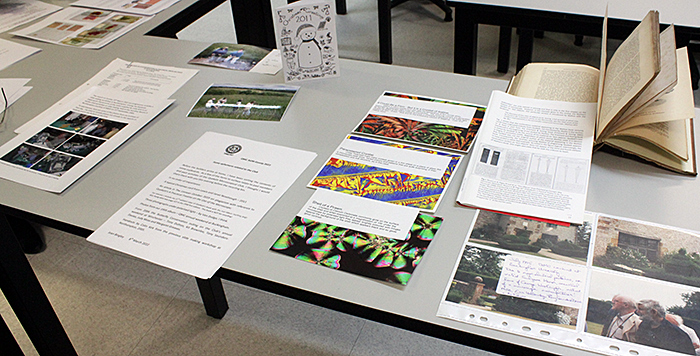 Her items included an article on plagiarism of books written by John Quekett, Agnes Catlow and Jabez Hogg in The Linnean (Volume 35, Number 2, October 2019, pp. 11–18):

From the Workshop on microtomy in Northampton in 2005, some photographs and Colin Kirk’s notes on wax embedding and staining slides: 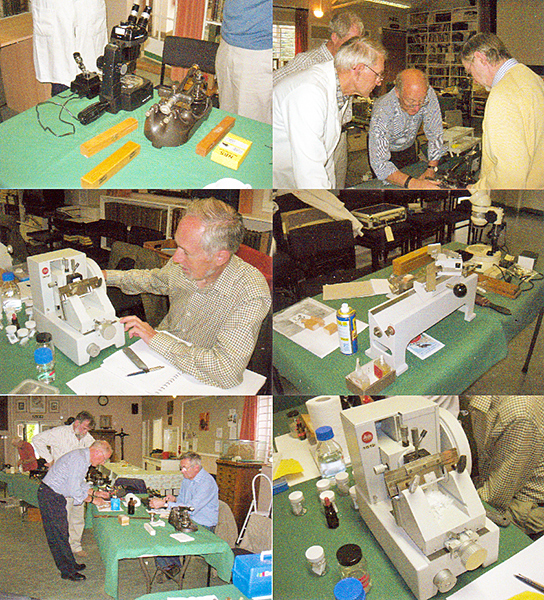 From the Microscopists’ weekend at Winchester in 2004, a photograph of participants on the butterfly conservation outing: 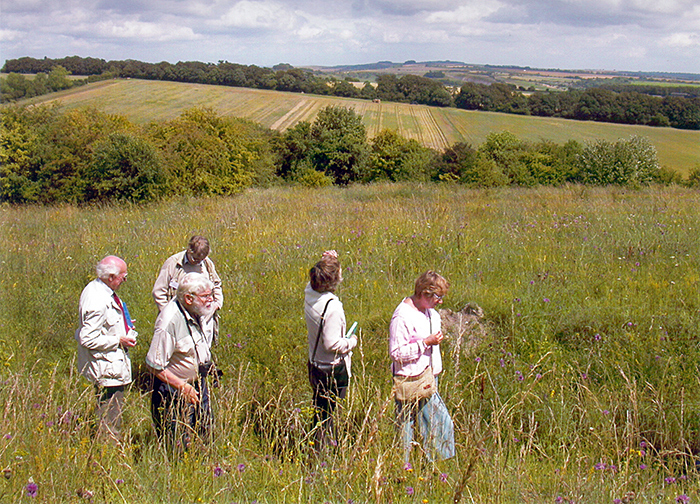 From the Microscopists’ weekend at the University of Buckingham in 1995, some photographs of the visit to Sulgrave Manor. 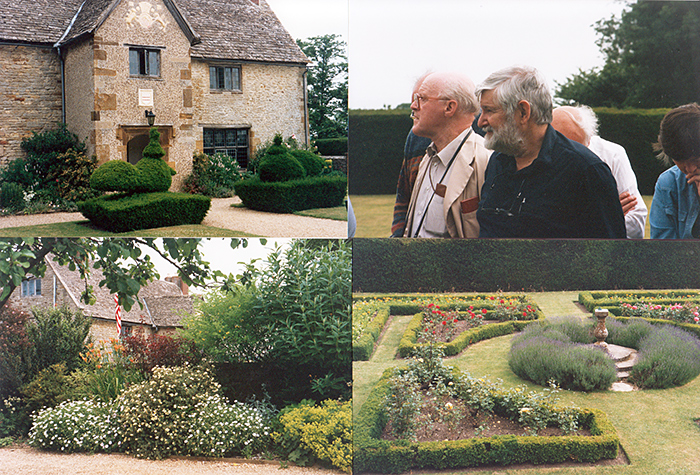 And finally, some annotated photomicrographs of crystals under crossed polarisers by Ven Dodge:

It could be a fern – but it is a crystal of isatin
Isatin in micro crystal form can take the appearance of fern fronds when examined by polarised light under the microscope. The amazing colours are generated by the effect of the actual crystal structure in inhibiting proportions of the white light content of red – green – blue and so the subtractive colours of magenta – cyan – yellow result. 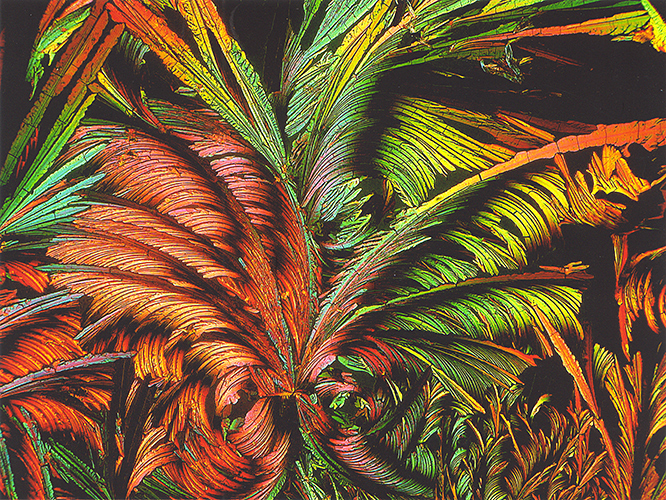 Paracetamol crystal
Under polarised light many crystals grown in thin sheet on a piece of glass like a microscope slide show varied colours and pattens that are quite surprising in their complication and substructure, as in this case. 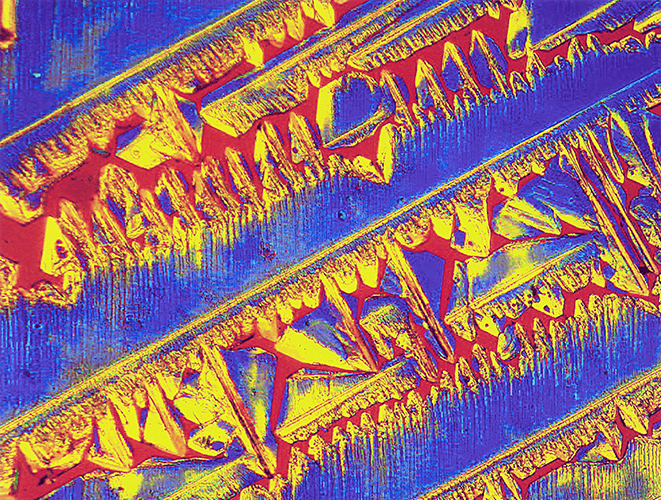 Shell of a prawn
Crystals of calcium carbonate commonly grow on the surface of the shell and when examined at a magnification of 100 under the microscope by polarised light they appear brightly coloured with fringes against the background of the shell which appears black and so gives good contrast. 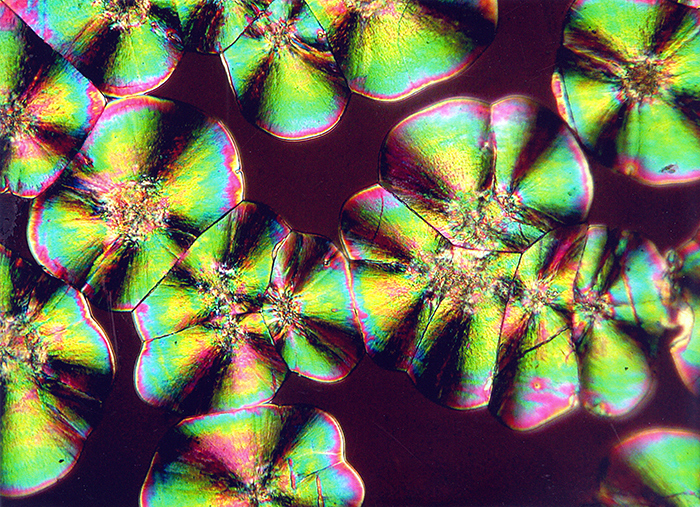 Shell of a prawn

Phil Greaves brought 3 volumes of Eric Hollowday’s notebooks on freshwater biology, written between 1943 and 1945. They include typewritten notes as well as Eric’s original illustration, and were donated to the Club in 2021. 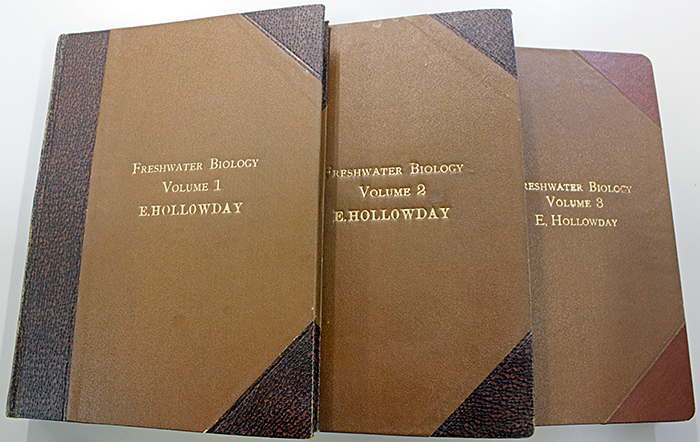 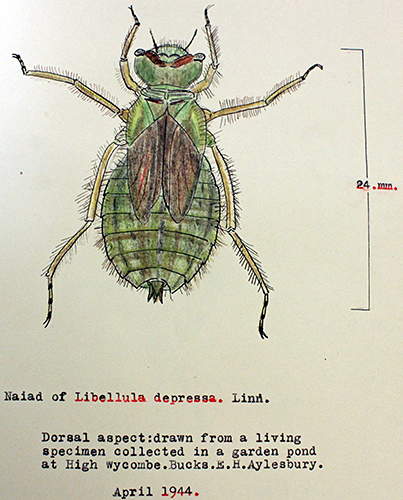 Stephen Parker used one of the Museum’s Leica EZ4 stereomicroscopes to show two slides of sections of ancient wood. One slide had XS, RLS and TLS sections of alder (Alnus sp.) from the Neolithic Abbot’s Way causeway in Somerset, which has been dated to 2850 B.C. The other slide was Victorian, with 3 different sections of Cedar of Lebanon (Cedrus libani) from an ancient Egyptian temple, so the wood is probably from before 1000 B.C. 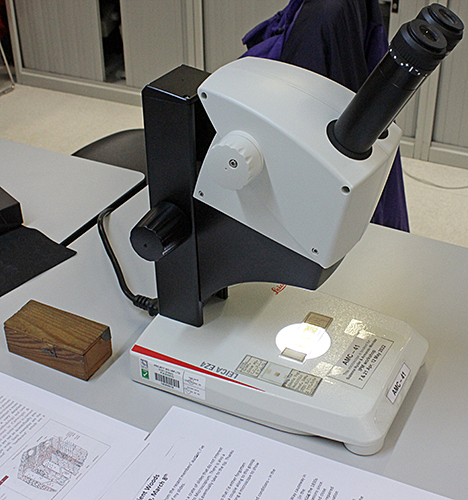 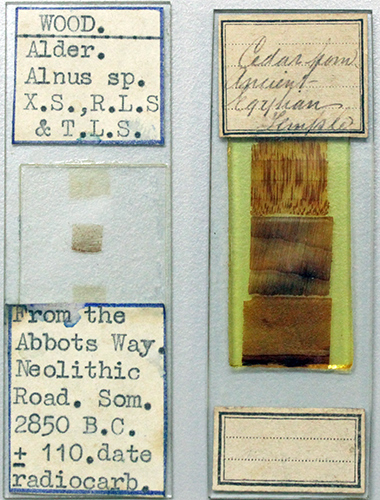 Alan Wood brought 3 of his phase telescopes, one by Watson and 2 by Olympus, with notes on their uses in phase contrast, conoscopic imaging of minerals and crystals, and examining the lens surfaces of objectives. 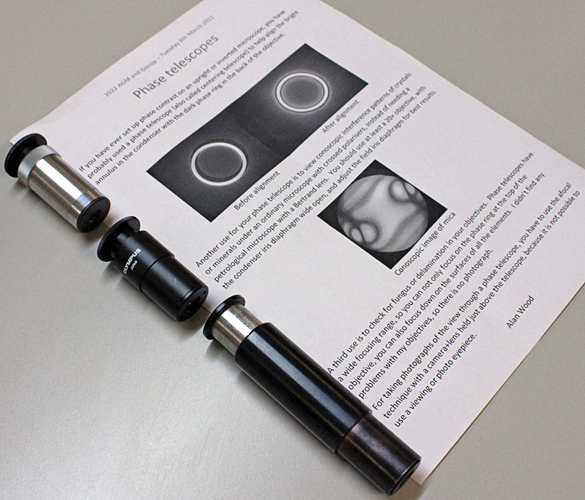 The principal use of phase telescopes is aligning the bright annulus in a phase condenser with dark ring in the back of a phase objective, using the centering controls on the condenser.

Left: Before alignment Right: After alignment

To see conoscopic images of rock sections or crystals, you usually need a petrographic microscope with crossed polarisers and a Bertrand lens. However, you can also use a normal microscope with crossed polarisers, using a phase telescope instead of one of the eyepieces. You should use a least a 20× objective, have the condenser iris diaphragm wide open, and adjust the field iris diaphragm for best results. 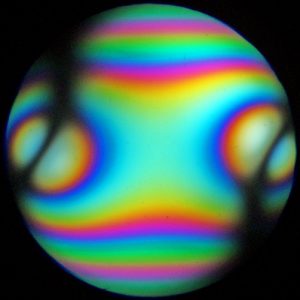 Phase telescopes have a wide focusing range, so you can not only view the phase rings in objectives, you can focus on the surfaces of each element to check for dirt or delamination.