Quekett members can watch a video of this meeting.

Geoff Phillips told us that before COVID-19, he used to meet up once a month with Chris Adams and other enthusiasts to identify freshwater organisms. They now meet once a week using Zoom, and share images of specimens and of keys and illustrations. Some specimens are viewed whole, while others are dissected and mounted on slides. Geoff prefers using the cameras on his microscopes via a tethering program instead of as webcams because it gives better control of colour and exposure.

Alan Wood has been trying to use his Canon digital SLRs as webcams, and has been experimenting with 2 programs.

EOS Webcam Utility from Canon has no interface, it is just a driver that works when a supported camera is attached and a suitable program such as Zoom is open. Any changes to the camera settings have to be made on the camera.

It works with Alan’s EOS 5D Mark II (not officially supported) and EOS 600D, but the image is not the full width of the window in Zoom.

After installing the driver, Alan’s EOS 40D no longer worked with EOS Utility, but it worked again after he un-installed the driver.

digiCamControl Virtual Webcam has an interface where you can set aperture, shutter speed, ISO, metering mode, white balance, exposure compensation and focus mode. You can also flip the image left to right, focus, and turn Live View on and off.

It works with Alan’s EOS 5D Mark II (not officially supported) and EOS 600D, and the image is the full width of the window in Zoom, but movement is not as smooth as with EOS Webcam Utility. 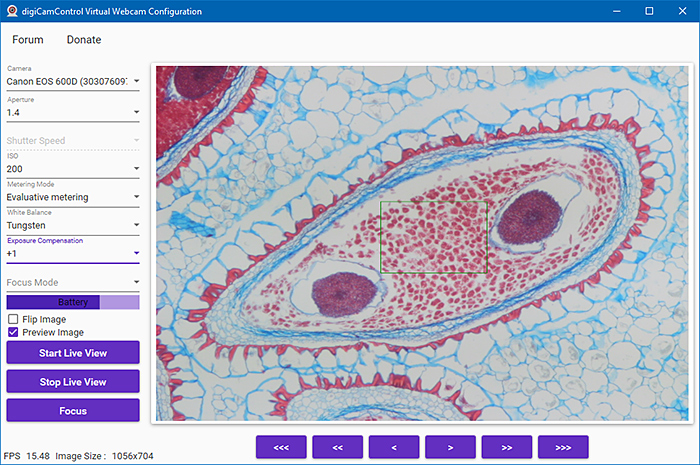 Zoom lets you switch between the attached cameras; just click the up arrow next to the Stop Video icon near the bottom left of the window, and select one from the list: 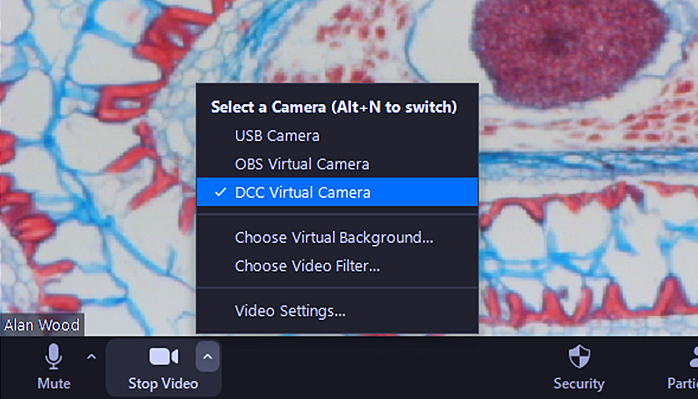 Selecting a camera in Zoom