After much discussion on the part of the organisers, the Sidmouth Science Festival was back as a live event this year during two weeks at the start of October. Saturday 9th October was Super Science Saturday with a variety of talks, events and displays in a variety of locations throughout the town. It is always very well supported and this year was no exception. The Club put up a display of microscopes in the hall attached to All Saints Church. The main topics at this venue were geological, with several lectures during the day in the church from a variety of experts, most relating to the fossils and geology in the Jurassic Coast area. There were four other displays in the hall, three geological and one, by students at Exeter University, showing live physics demonstrations. Throughout the day small water cups were projected (empty), with the inevitable countdown, to the ceiling by an air pump.

In the Club display, Joan Bingley and Pam Hamer used a variety of digital imaging systems to show both geological and ecological specimens, the latter showing the wider use of microscopes. Sometimes the simplest system proves interesting, an attachment to use the camera on a tablet computer or phone as a low power magnifier was a bit of a hit with both older folk and with small children. The latter were more fascinated by the skin on their hands and fingers than the prepared rocks. The newly-printed handouts were of interest to some, and pre-prints of one of the new handouts ‘Things to look at – Rocks and Minerals’ nearly ran out. There was a steady flow of people throughout the day, perhaps more adults in the morning with the families with children coming in the afternoon. It was good to hear parents explaining that small fossils children could see in a rock sample were like the ones they had recently seen during a museum visit. Joan’s plant specimens were also a hit.

Pam Hamer and Joan Bingley on the Quekett stand 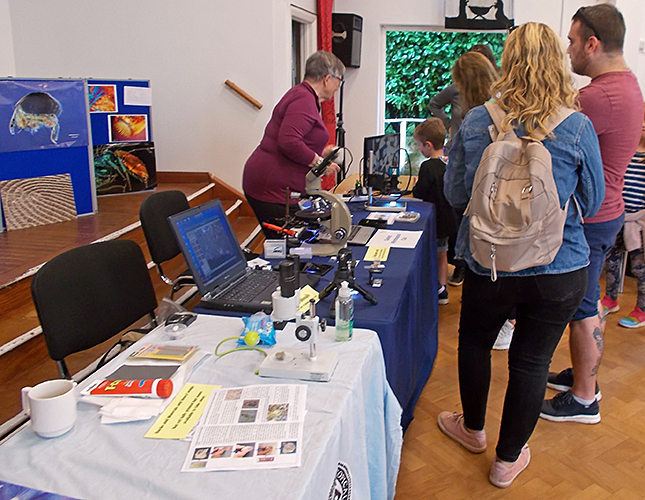 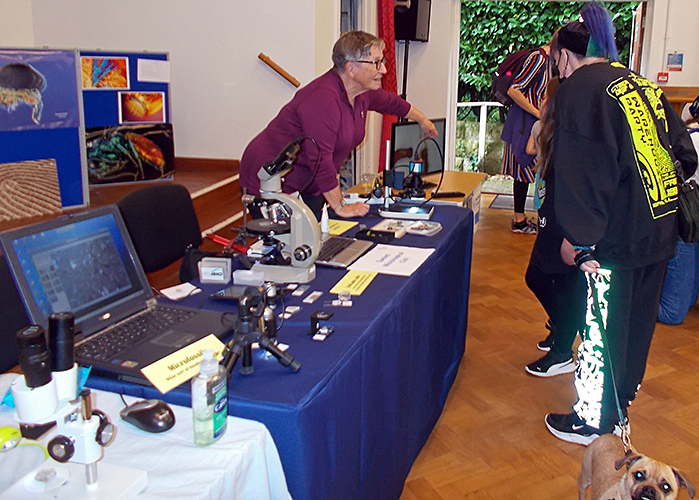 Joan Bingley with visitors to the Quekett stand 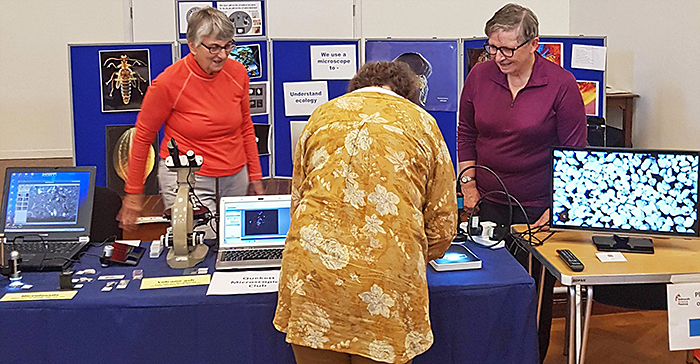 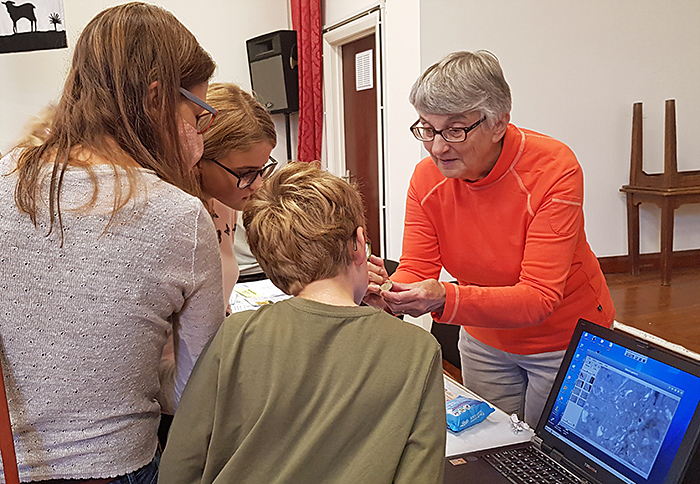 Pam Hamer with a visiting family 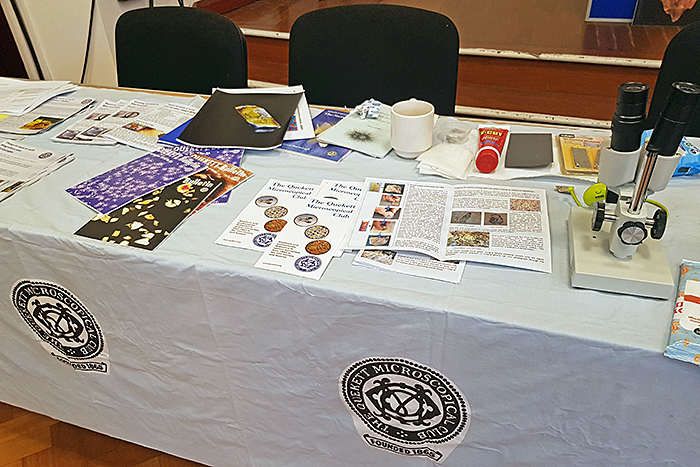 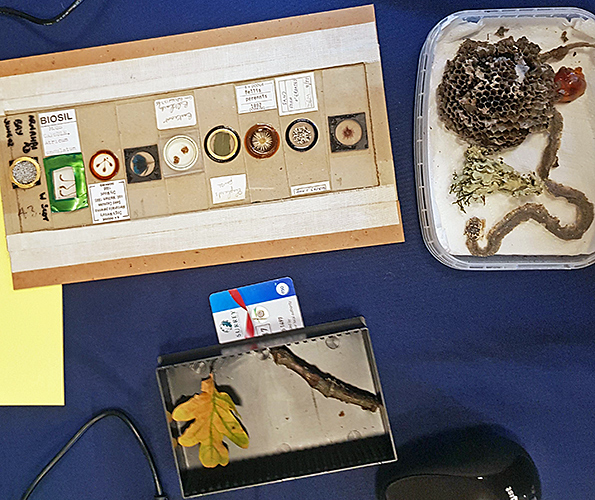 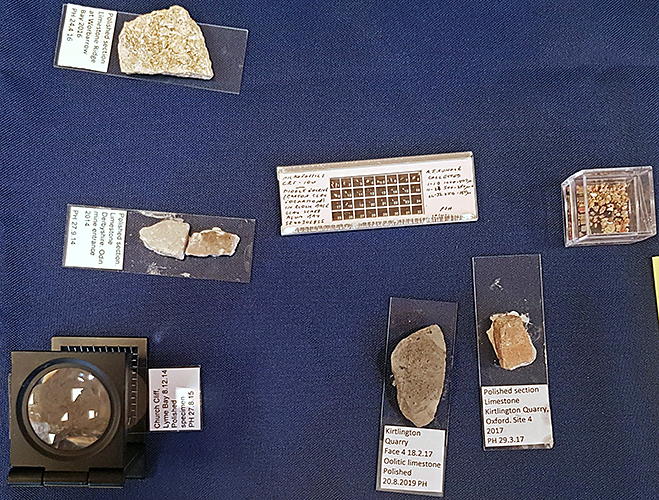 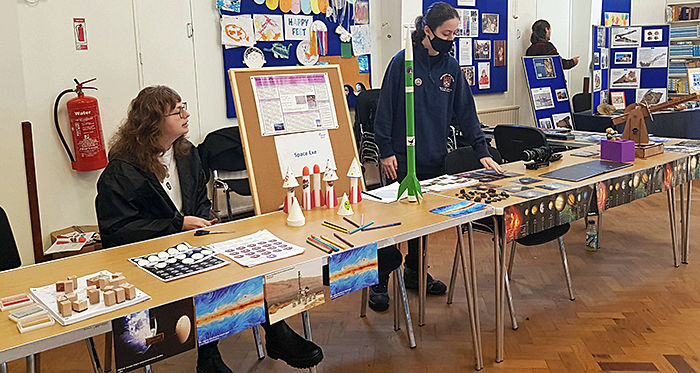 It must have been very difficult for the organising committee to go ahead with the event in such uncertain times. However, they did a great job with the Festival which included a dinosaur strolling through the street at 2 p.m. and an attempt at the world’s longest accurate transmission of a sentence via two tins and a long piece of string. Sadly, although a practice run with catering tins and a wire link worked well, on the day they did not achieve the record. More innovation needed next year! For anyone interested, we understand the talks were recorded and should eventually be available to enjoy by those not in Sidmouth – check the Sidmouth Science Festival website.