Home | About the Club | Meeting reports | Microscopium – The Microscopists’ Fair

The usual venue for the Quekett’s annual sale of microscopes and related items in St Albans is too small to allow for the social distancing that is part of Covid-19 precautions, so this year we moved a few miles east to the main hall of the Elm Court Youth and Community Centre in Potters Bar. In addition to providing members and visitors with a good opportunity to dispose of surplus items and to acquire new kit, Microscopium provides an excellent opportunity to meet old friends, make new friends, and gossip over tea and coffee and over lunch. This was our first face-to-face meeting for over 18 months, so there was a lot of catching up to do. 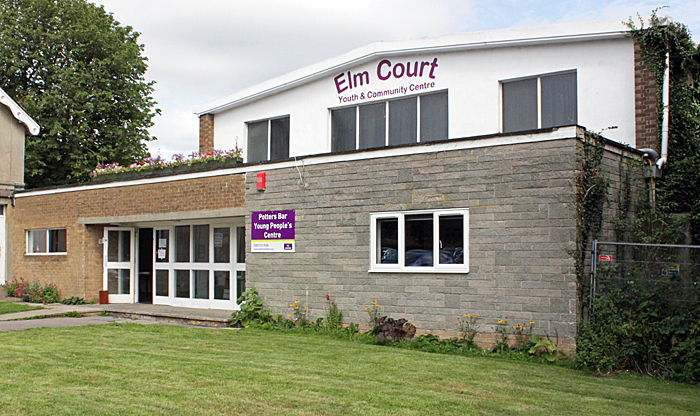 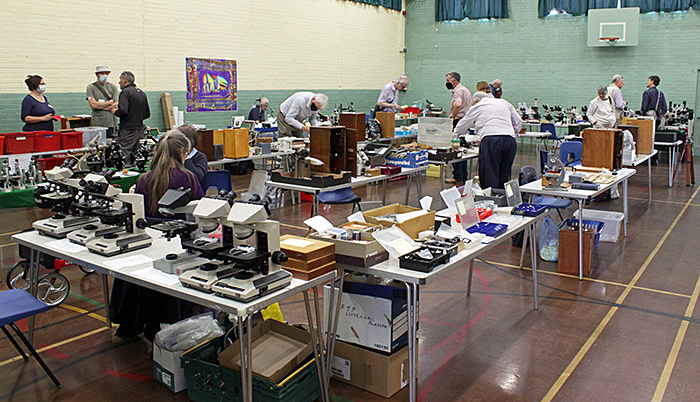 We asked everyone to wear a face covering (several people were exempt), and to sign in with their name and telephone number (in case anyone reported being Covid-positive within the next 10 days). Buyers were not allowed in until 10:00 a.m., to allow sellers an hour to set up without crowding. Tables were well spaced out, and a limit of 3 buyers per table was enforced. Tea and coffee were available in the reception area outside the main hall, also helping to avoid crowding.

You never know what to expect at Microscopium, and this year there were over a dozen trinocular compound microscopes, several phase contrast outfits,  fibre optic illuminators and C-mount adapters, but not many books. By 1:00 p.m. lots of things had been sold and most sellers were packing up and departing.

As usual, many used microscopes, lenses, accessories, slides, books, etcetera were offered at reasonable prices for the benefit of amateur microscopists. These items, and any items that are given away, must NOT be subsequently sold on eBay at great profit, and anyone found doing so will not be welcome at future meetings.

Lisa and Nigel Ashby were selling a couple of items of their own but mostly items for the Club, including two stereomicroscopes, a Lomo polarising microscope, a Lomo phase contrast set, some condensers, eyepieces and objectives, lamps, a transformer, a filar micrometer eyepiece and four crates of books. 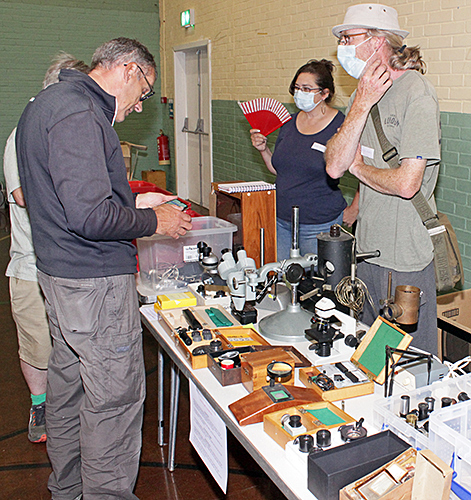 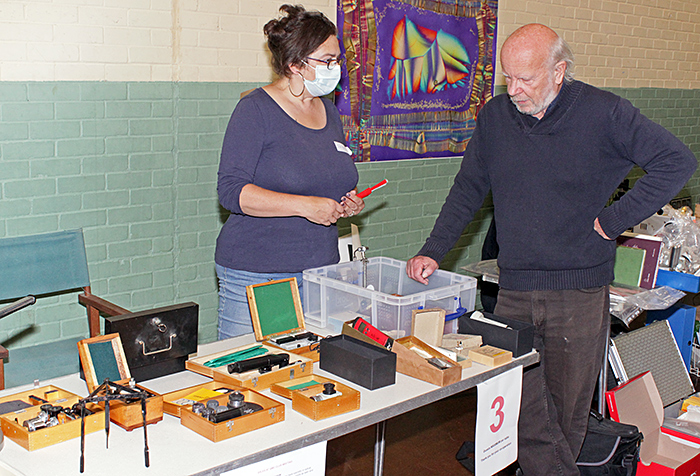 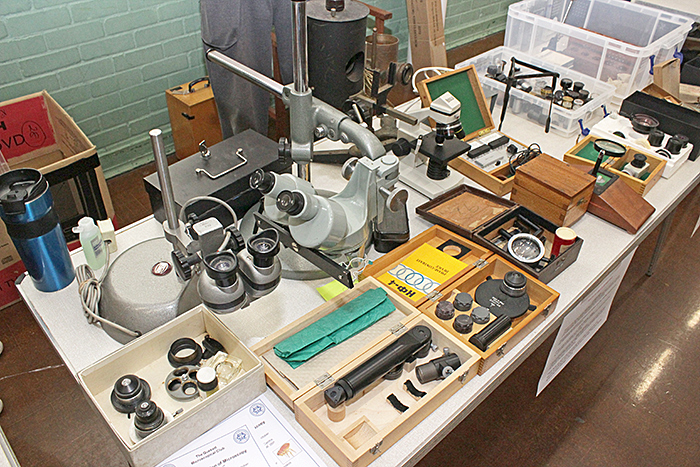 Some of Lisa and Nigel Ashby’s books 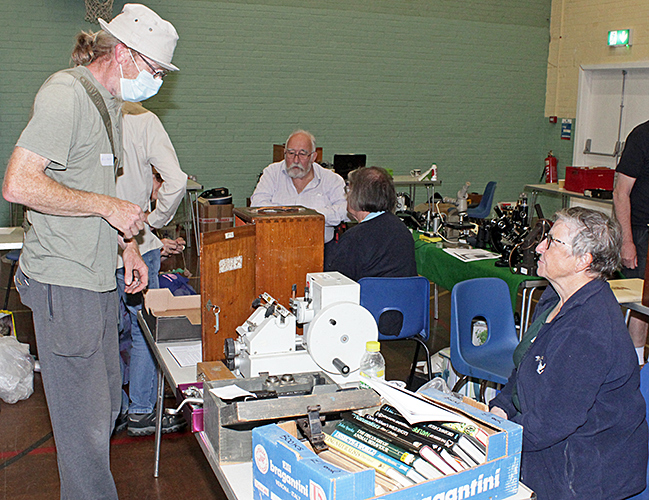 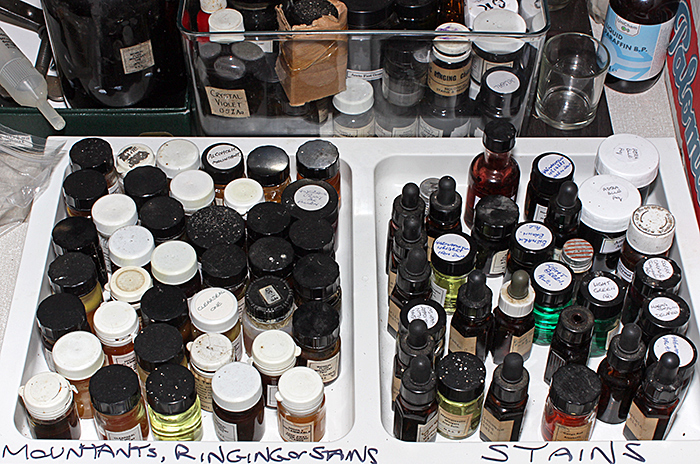 Some of Joan Bingley’s chemicals

Gordon Brown’s items included a monocular Beck 47, a monocular Vickers M14, a binocular Zeiss Jena, and the arm and stage of a Leitz microscope.

Don Edwards, who used to run the Antique Scientific Instrument Fair, had a couple of brass microscopes with their wooden cases for sale, also an interesting slide vacuuming chamber, and some amber from Kaliningrad on the Baltic with insects in which created quite a lot of interest. 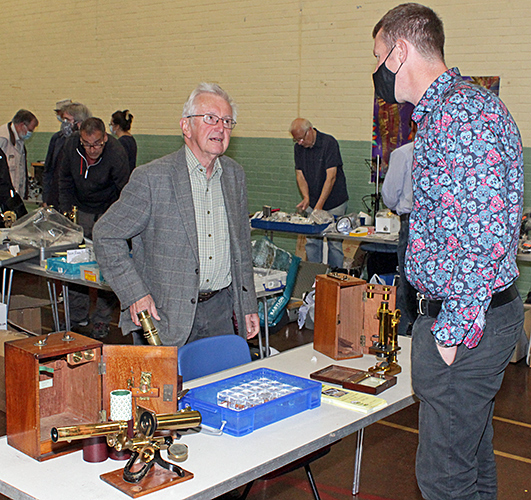 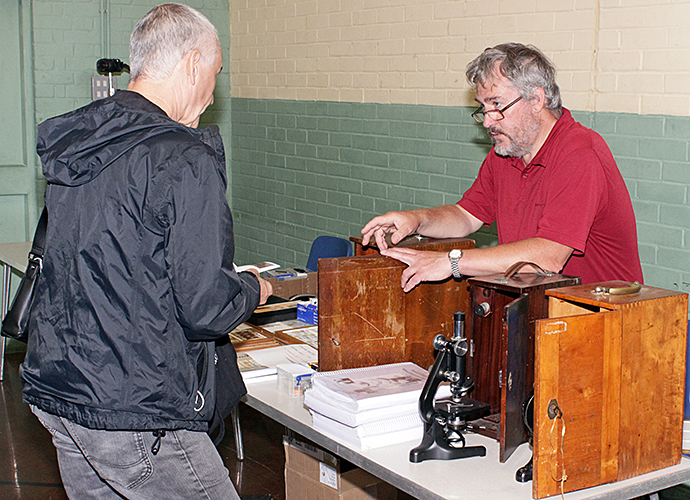 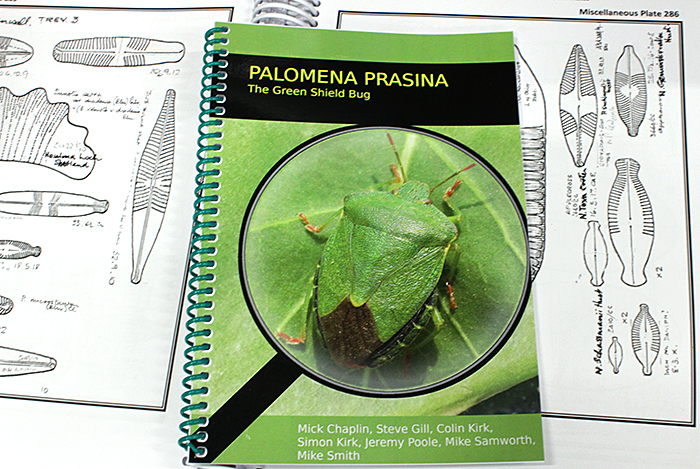 Phil Greaves had tables overflowing with objectives, eyepieces, lamps, transformers and other accessories from makers including Baker, Beck, Lomo, Meopta, Olympus (including analysers and tint plates), Reichert, Vickers, Wild and Zeiss, some monocular microscopes, a Lensman portable microscope, some unused NBS slide making kits, trays of large brain sections, lots of sets of slides of all sorts of specimens, some books, lots of filters that had belonged to Tony Dutton, a tripod and some measuring equipment. Phil was also giving away lots of Japanese, German and English microscope literature from Hampshire Micro that had been donated by Dave Routledge. After lunch, Phil reduced all of the prices by 50% so that he had less to take back home. 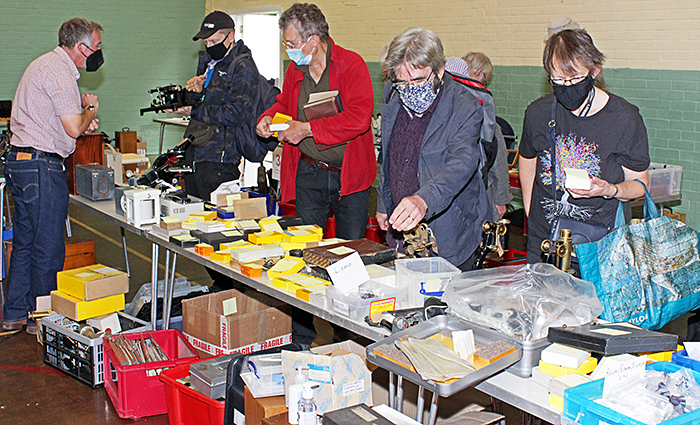 Phil Greaves (left) with visitors to his tables 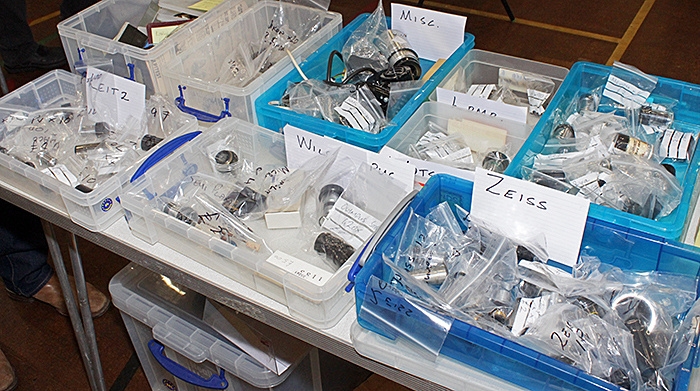 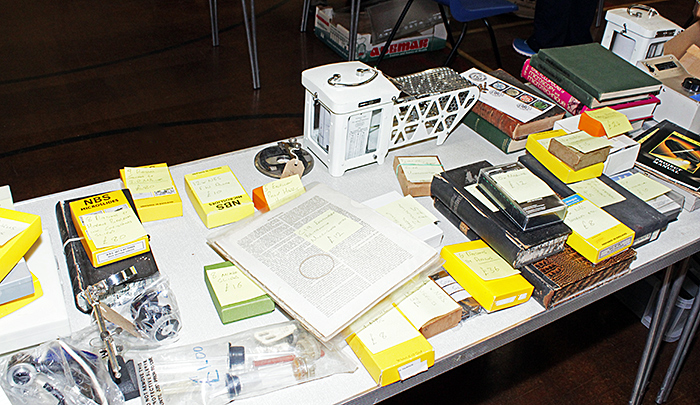 Chris Kennedy and Terry Cooper were selling a binocular Reichert microscope, large wooden boxes with lots of Reichert equipment, some brass microscopes, a modern monocular microscope, a Beck 35mm microscope camera, lots of books on microscopes and cameras, and some old cameras. 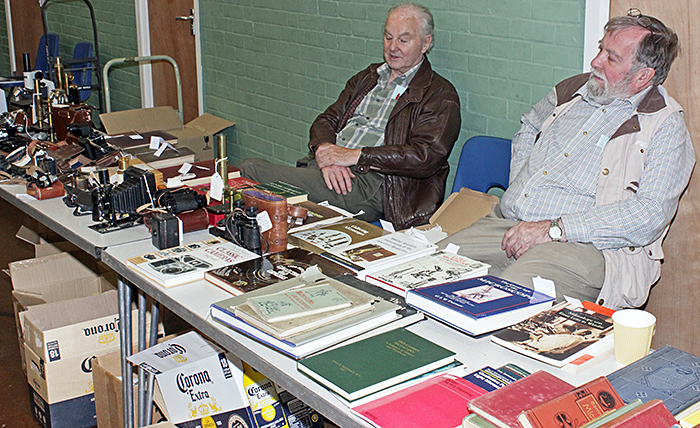 John Millham had 4 tables overflowing with desirable equipment including over a dozen trinocular compound microscopes from Leitz (Diaplan, DM2000), Nikon (Eclipse E400 with plan apos), Olympus (BHS, BX40, BX40 with phase contrast) and Zeiss (Axioplan). He also had some nice stereomicroscopes, including a Wild M5A (with dome cover), a Wild M3C on a very sturdy table clamp, an Olympus SZ30, and a trinocular Olympus SZH10 with 1.2× DFPlanApo objective. As usual, John also had a good assortment of Leitz, Nikon and Zeiss objectives and eyepieces, as well as some fibre optic illuminators, camera adapters, an Olympus digital microscope camera, etcetera. Several of the microscopes are still available, so if you are interested please contact John Millham. 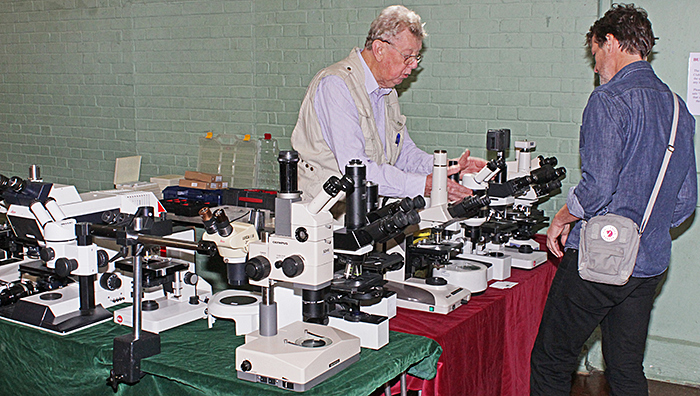 John Millham extolling the virtues of a Wild M5A stereomicroscope 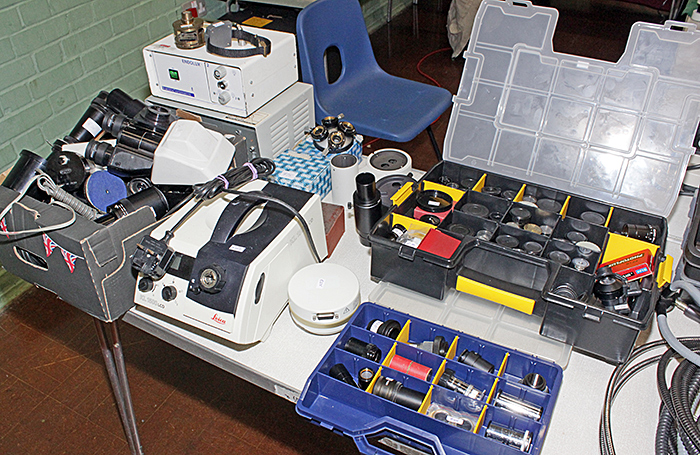 Brian Norman had all sorts of items for sale, including a Philip Harris microprojector, a black Leitz trinocular, a black and chrome CTS binocular polarising microscope, a stereomicroscope, a couple of brass microscopes, lots of brass lenses, a phase contrast condenser, a motorised stage for an Olympus BX, sets of slides (including some by T. J. Slatter, recently discussed in QuekettMicro on Facebook), several accessories and adapters, some books and a centrifuge. 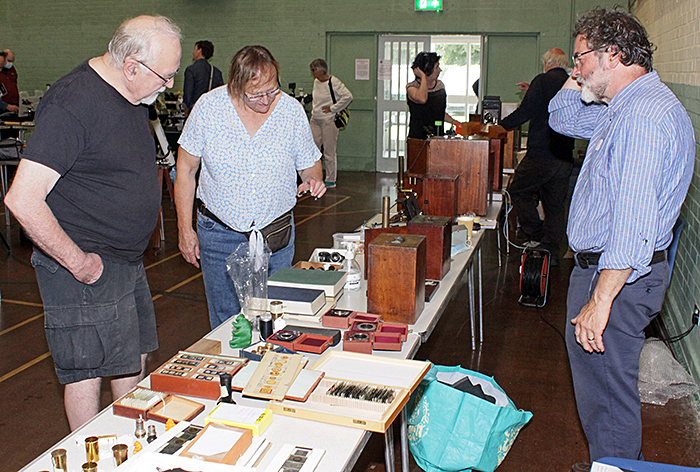 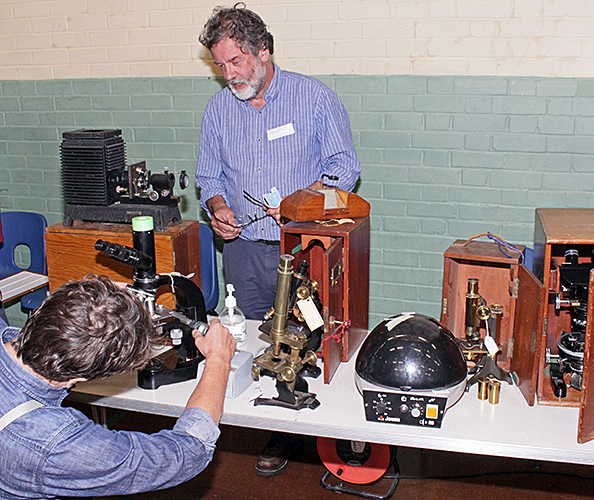 Brian Norman (standing) with some of his microscopes and a centrifuge 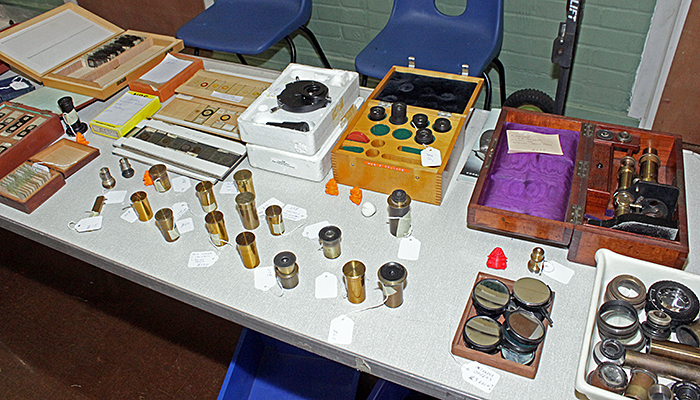 Some of Brian Norman’s slides and accessories

Stephen Parker had various items for sale, including a student microscope, a Beck phase contrast set, Zeiss Jena Epi-DIC attachment and Interference set, Zeiss Interphako bits, a Reichert condenser, a Reichert Zetopan circular stage, an Olympus DP-10 microscope camera, and C-mount adapters for Nikon and Zeiss microscopes. Stephen also had boxes of items for which he was inviting offers. 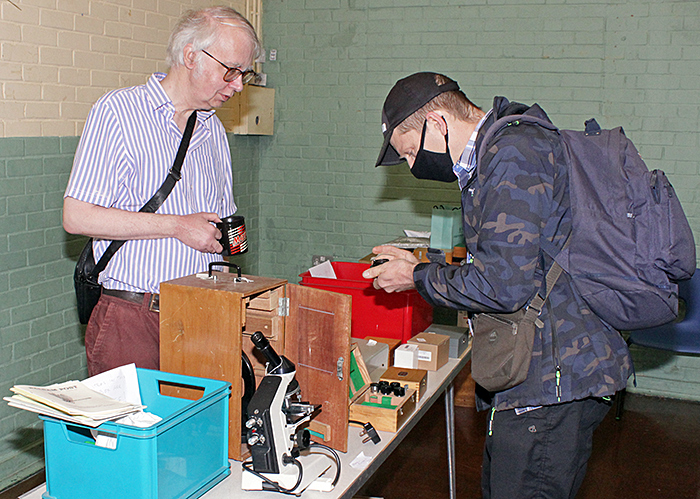 David Peston usually sells mostly Leitz equipment, but this year he had lots of Olympus equipment, including BHS, BHT, BHTU and CH-20 stands, several eyepieces for  CH-2 and BH-2 microscopes, boxes of DPlan and SPlan objectives from 4× to 100×, and accessories including flip-top condensers, a Photomicro Adapter L, a 6-position BH-2 nosepiece, an MTV-3 C-mount adapter, a U-SPT photo tube, PE 2.5× and NFK 3.3× photo eyepieces, and a B-AN analyser. He also had one Leitz stand, a box of Leitz objectives, some slide sets, and lots of bulbs and filters. 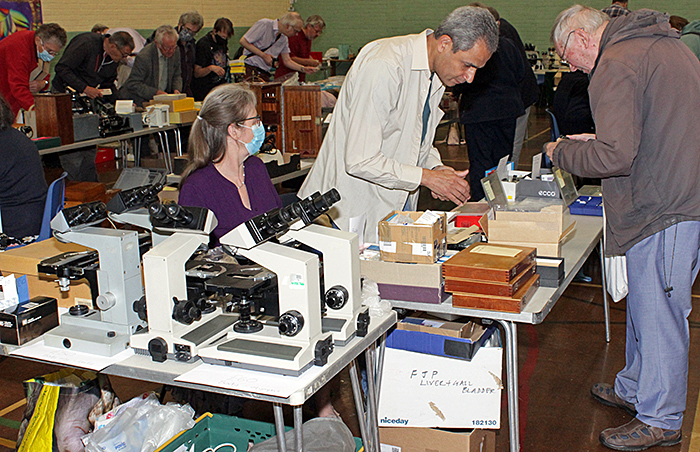 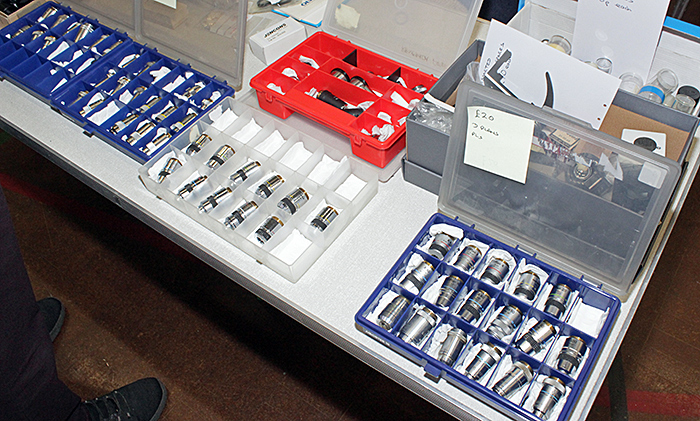 The Quekett Shop was selling books, binders, ties and the Journal archive on a USB drive, and giving away issues of the Journal. 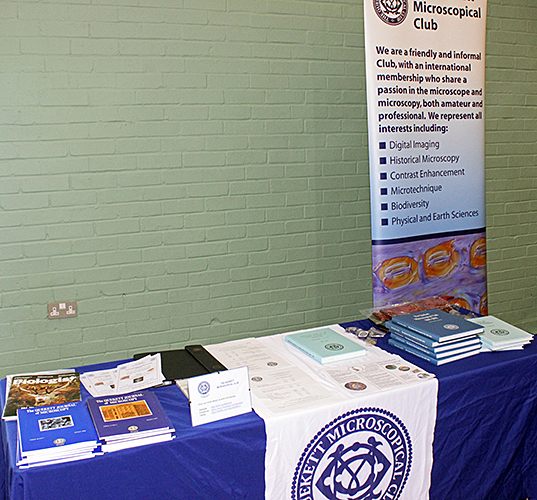 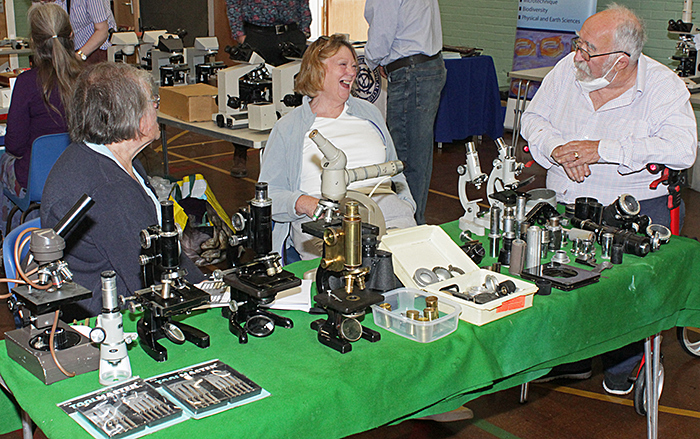 Derek Sayers and his sales table

Mark Shephard was selling a binocular CTS with phase contrast, a grey monocular Beck 57, and several sets of slides, including some microphotographs by Dancer. 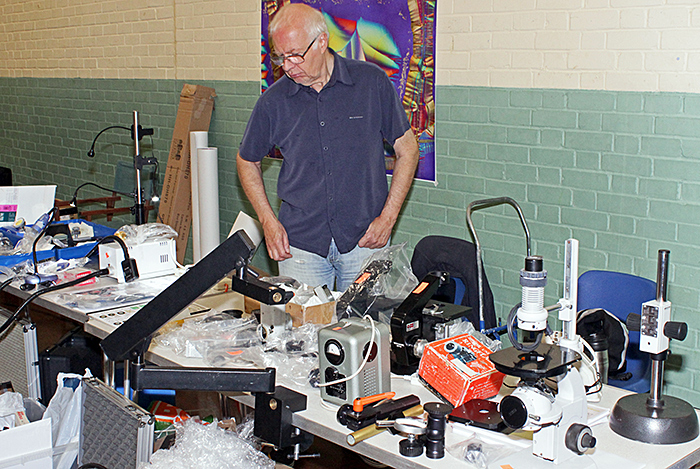 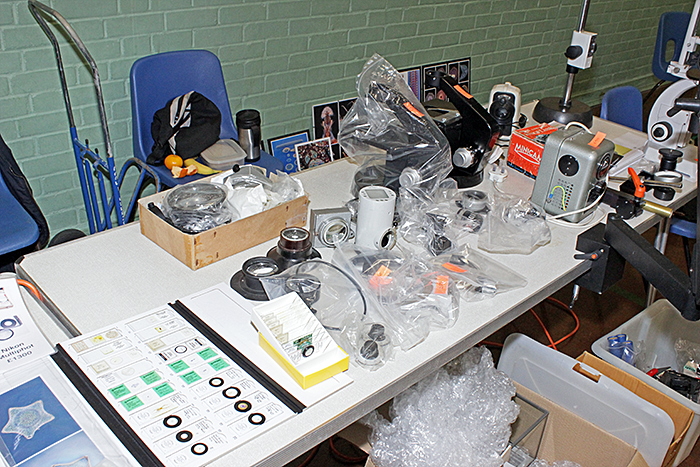 Some of Harry Taylor’s items 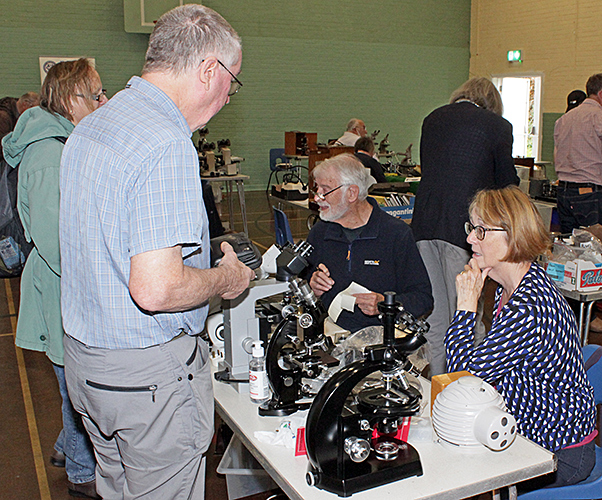 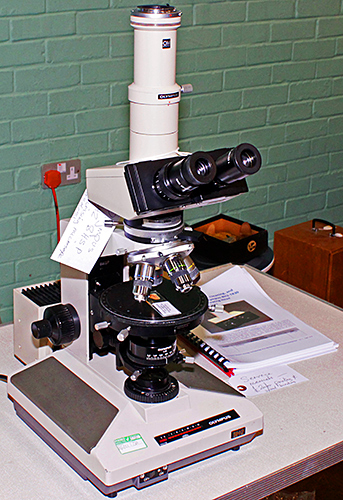 We are planning to make Zoom broadcasts part of many of our meetings, and this was our first experiment. Paul Smith set up a camera just inside the entrance to the hall and recorded this video:

Our thanks to Mark Shephard, Stephen Parker and Lisa Ashby for successfully organising Microscopium at a new venue, with some very happy buyers and sellers, and to those who put out and packed away the tables and chairs.