The judge this year was Graham Matthews. Graham judged and photographed the slides before they were revealed at the Annual Exhibition of Microscopy in Potters Bar on Sunday 3rd October 2021, and he had the difficult job of deciding which of the excellent submissions from members of the Quekett, the Iceni Microscopy Study Group and the Postal Microscopical Society were of a sufficiently high standard to deserve a certificate. Steve Gill announced the entrants who deserved certificates during the gossip meeting on Friday 8th October. 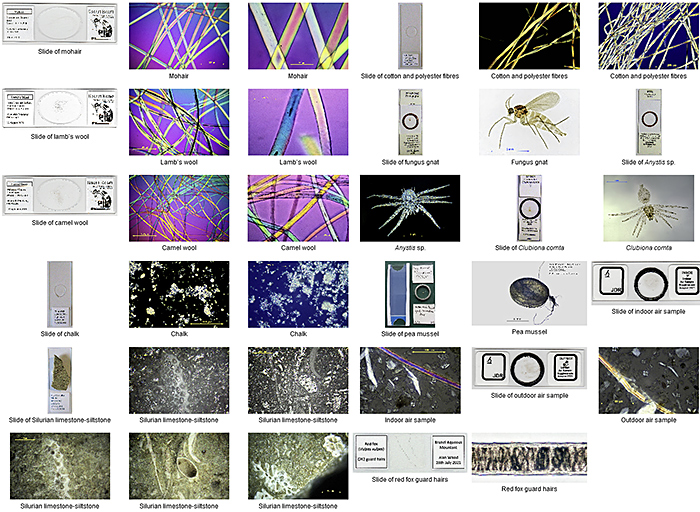 Gallery of slides and photomicrographs

Graham prepared this PowerPoint presentation with photographs and photomicrographs of the slides, and his notes:

Graham commented on the submissions:

As in previous years the Marson entries cover a wide variety of topics and slide making techniques. Given the variety of entries, making for nigh on impossible comparisons, certificates will be awarded to all!

Graham entered slides of mohair (from a young Angora goat), wool from a one-week-old Suffolk Blackface lamb, and willowed Chinese Camel wool, all of which show interesting colours under polarised light. 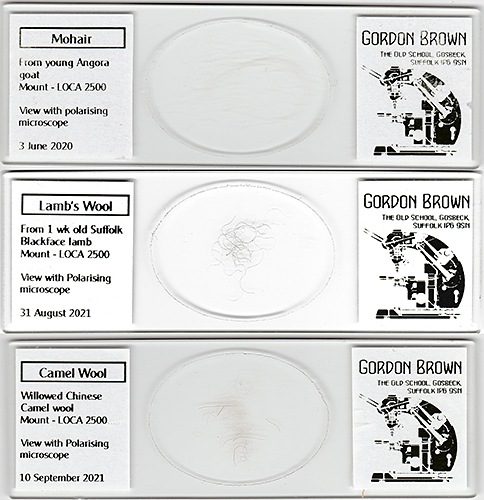 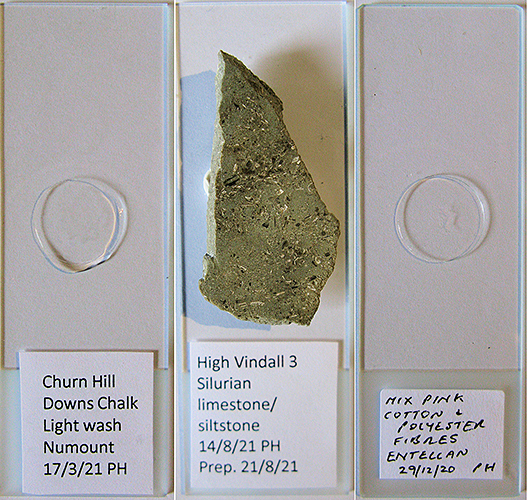 Pam entered three very different slides. The first was a sample of chalk from Churn Hill on the downs near Blewbury. Pam shook the stone with water several times and left it for a few days. Then she sampled the cloudy layer just above the settled sediment and let it dry on a slide before adding Numount and a coverslip. The second was a piece of limestone or siltstone from the Silurian age, collected from quarry spoil at High Vinnall near Ludlow. After grinding flat and polishing by hand, you can see details of corals and a crinoid. The third was ribbon-like cotton fibres and cylindrical polyester fibres, which react differently under polarised light. The polyester has a high birefringence, as shown by the high-order polarisation colours within the fibres.

Graham has been collecting from Warnham Local Nature Reserve and the adjoining Rookwood Golf Course, and entered slides of a fungus gnat, a predatory mite and a spider. 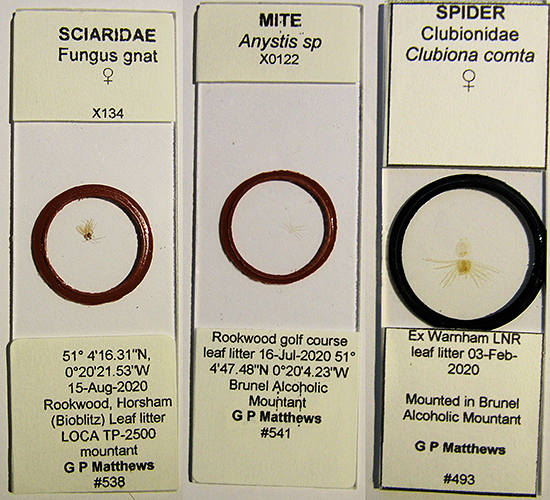 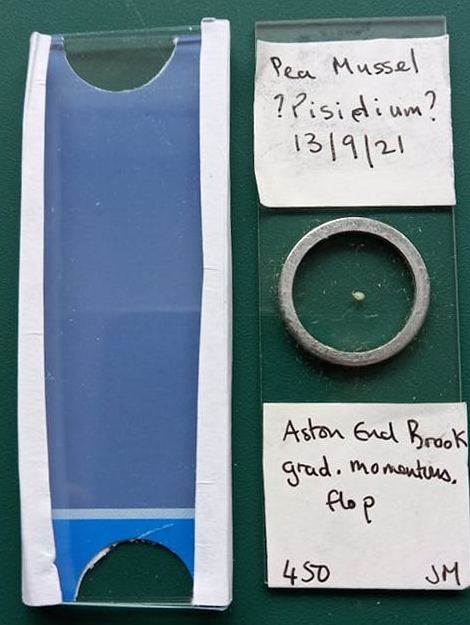 Jacky has been sampling the environs of Ridlins Mire, and found a pea mussel under a road bridge. The specimen is mounted dry and not covered, so Jacky made a protective sleeve for the slide 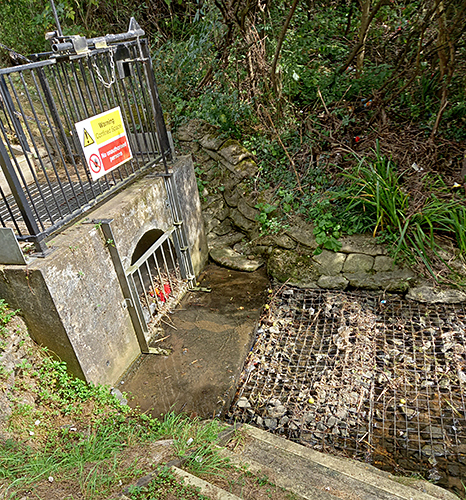 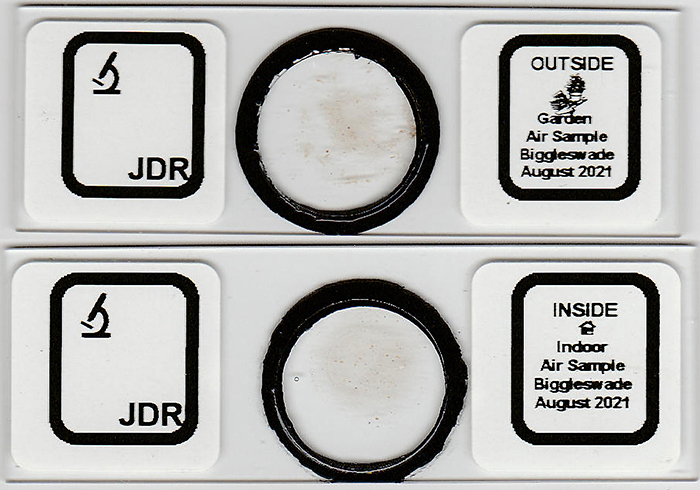 To collect particles from air, John used a method devised by Derek Stevens. He used wooden cocktail sticks coated with glycerine and pressed into a cork and left for at least 6 hours. He then washed the sticks with filtered water and centrifuged the washings, before mounting the debris in LOCA. 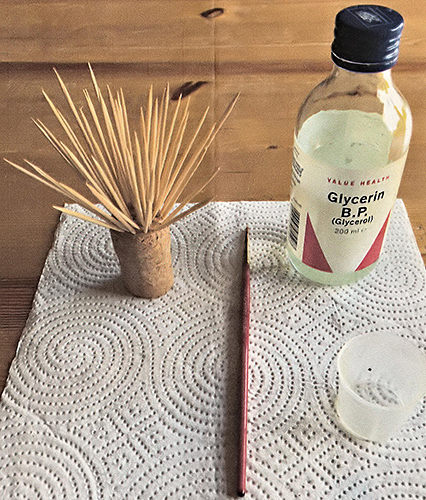 Alan has been using bird spikes to try to keep foxes, cats and squirrels off the roof of his bungalow at night. To identify the animal, he collected clumps of hair from the bird spikes and mounted a couple that looked the right colour for a fox. David Roberts kindly identified them as GH2 guard hairs of a red fox (Vulpes vulpes). 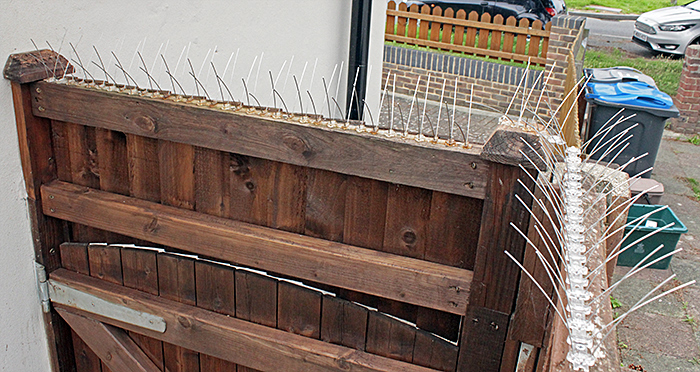 Bird spikes on fence and gate

Clump of hair from bird spikes