‘Going down the rabbit hole’ with the ctenophore Pleurobrachia pileus!

This is a preliminary report of some observations made on the ctenophore Pleurobrachia pileus which, once started, led me down unexpected paths but taught me a lesson. I am hoping some kind readers may be able to fill in some of the gaps.

I have been sporadically sampling zooplankton in Poole Harbour over the last couple of years. I usually pour the sample through a tea strainer which removes any weed and traps the ctenophores, which look like spheres of jelly the size of small marbles, which might otherwise be capable to consuming the rest of my sample.

Ctenophores are rather primitive organisms with bi-radial symmetry capable of powerfully swimming in the water column using 8 comb plates (or ctenes) containing rows of cilia but also with two dangling tentacles with sticky cells with which to trap other organisms as these are carnivores (Fig 1). They have a mouth and anus connected by a digestive tract, and most are hermaphrodites with testes and ovaries either side of a canal underlying each comb plate. 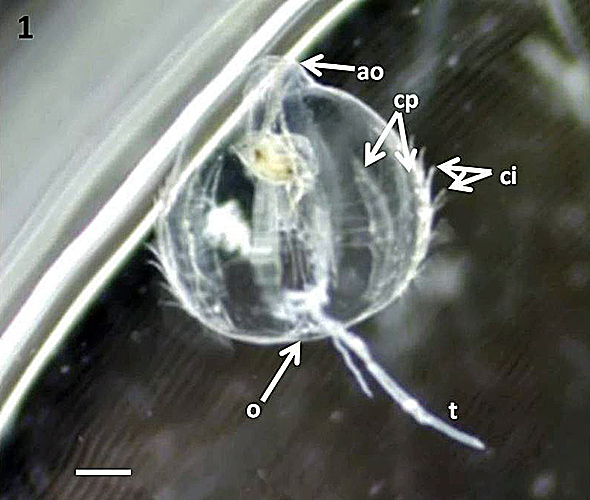 Fig 1. Dark field still image of video of Pleurobrachia plieus in which several of the comb plates (cp) are seen and motile cilia at the edge (ci). Oral (o) and aboral poles indicated and one of the trailing tentacles (t). Bar 1 mm.

Last May, I decided to look at these organisms in more detail before tackling the rest of the plankton sample. Pleurobrachia are best viewed with dark field when the metachronous waves of ciliary beating can be seen as well as the tentacles – which are at least twice the body length. I had seen this all before, but what I hadn’t seen were numerous apparent eggs inside the jelly of several specimens and some of these eggs were being shed. Some eggs appeared to have started cleavage already, so I decided to try and record the process. Fig 2 shows a sequence of photos showing the two divisions turning the single cell into four blastomeres. The two cleavages can be seen to be unipolar, i.e. starting at one pole. Fig 3 shows the eight cell stage and the cells appear no longer equivalent in size. This cleavage pattern in ctenophores is neither of the two usual metazoan patterns of radial or spiral cleavage. The unequal cleavage changes the fate of the two lineages only one of which is capable of forming an anal pore (reviewed Gilbert & Raunio, 1997). 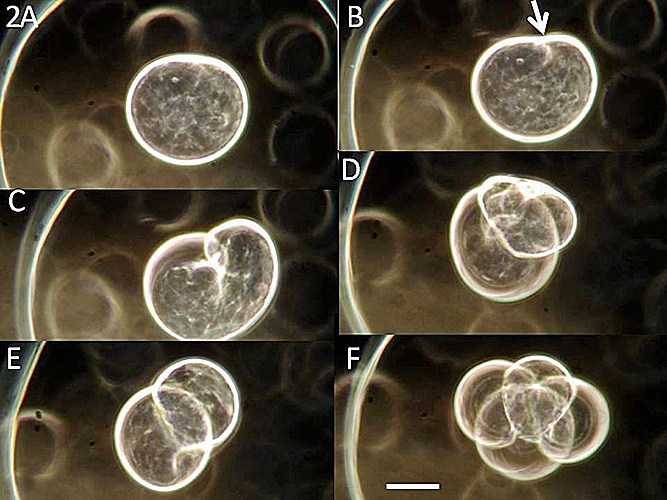 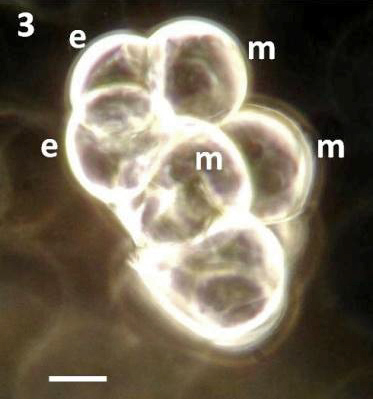 This observation of the dividing eggs posed several questions. When were the eggs fertilised? Pleurobrachia is hermaphroditic and, whilst there was some yellow tissue also voided from the animal, on examination, there were no cells appearing to be like sperm. If the eggs had been fertilised by another individual that would have had to have happened inside the ctenophore? Never mind – the experiment could surely be repeated next week…

Pleurobrachia were indeed caught the following week but no eggs were seen this time; there was something else inside the ctenophores but it didn’t look like embryonic ctenophores – what was it (Fig 4)? It seemed to be wriggling slightly but it was rather difficult to see within the jelly which was distorting the image. It was long and thin and appeared to have two suckers – a parasite? Now I am no longer studying the embryology of ctenophores but parasitology! 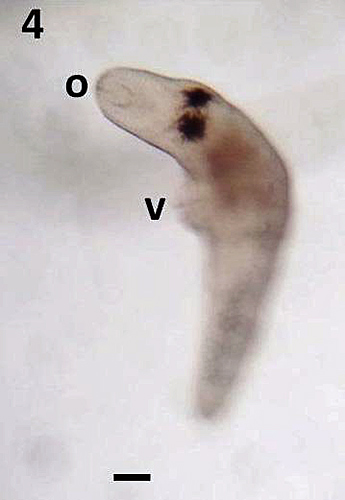 Some of the ctenophores had a few of these new organisms but one had over ten. Inside the ctenophore they were obviously alive but only moved slowly. However, once removed from the ctenophore by dissecting it they were much more mobile and hence still difficult to photograph. They had a ridged cuticle, an oral and a ventral sucker, two prominent pigmented patches near the oral end and prominent refractile inclusions near the posterior end (Fig 5). Consulting my zoology textbook, they appeared to be the metacercarial stage of digenean trematodes – parasitic members of the flatworm phylum. 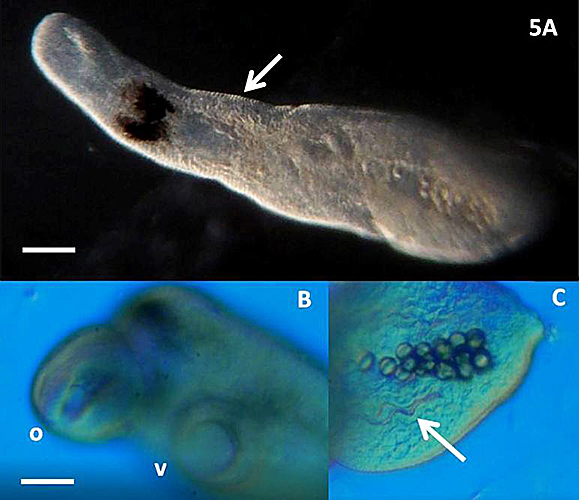 This has taken me down a search for pictures and publications of the likely species but there are probably over 6000 of them! It seems that ctenophores and jellyfish are known as intermediate hosts for the metacercaria stage of the life cycle of digenean parasites of fish. Researching the literature available online, they have been recognised as far back as the early part of the last century (Lebour, 1916) but there still seems scant details about possible importance of this part of the life cycle for which Pleurobrachia amongst other planktonic species can be intermediate hosts for digeans shed as eggs by a mackerel or another fish, ingested by gastropods, and then infecting the members of the zooplankton (Ohtsuka et al., 2009). These parasites are worldwide and most of the literature is based on South Atlantic or Pacific species. This parasite may be Operchona (Pharyngora) bacillaris but it will be some time before I can access the literature to confirm it.

I would be keen to hear from anyone else who has observed anything similar in Pleurobrachia spp. The lesson learnt is not that just a small observation can lead down some unexpected avenues but that one really ought to fix your specimens and take more pictures as working outside laboratory animals you can’t easily replicate your catch!

Acknowledgements: Thanks to Dr Marianne Koie for supplying copies of her publications.