Just like a face-to-face gossip meeting, this Zoom meeting sometimes meandered off topic with members talking about their first microscopes, asking for suggestions on geology books (followed by a discussion of polarising filters), showing us diatoms and spicules from Oamaru diatomite, asking for help removing a stuck objective, and telling us about their progress with d.i.y. DIC.

Apart from the geology ones, details of the books that were mentioned are given in bulleted lists under the names of the people who recommended them, so a few are listed twice. Many of the books are too old to have an ISBN. The days when each town had a second-hand bookshop are long gone, but many of the suggested books that are out of print can now be found used on Amazon or Abe Books.

Joan Bingley’s interest in microscopy started with Understanding Science, which includes a diagram of the microscope and how it works, as well as articles such as specimens in rock pools, and how non-flowering plants work. For a starting point in identifying freshwater specimens, she recommended Microscopic Life in Sphagnum.

Michael Bradley won a copy of How to Use the Microscope while he was at school, and was given his first microscope soon after.

Gordon Brown showed us his first microscopy book, Life under the microscope, a present on his 11th birthday, that contains lots of illustrations of specimens. He was sure that he was the only person on the huge council estate in Gateshead to own a microscope. 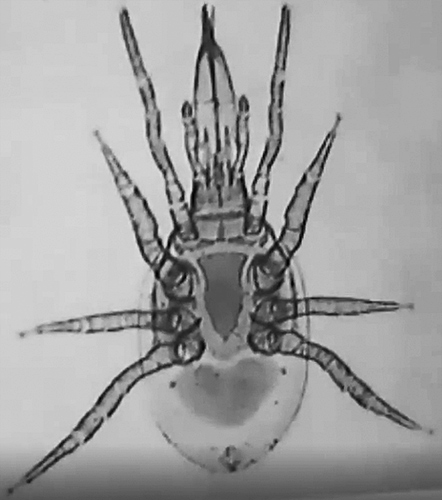 Danny Ferri became interested in microscopy when he was about 12 or 14, when he had a toy microscope and a copy of Microscopie Pratique. He even made slides then, and he still has a box of them. He was fortunate to live near a microscopy shop where he could buy tools and chemicals. His interest paused until he retired, when he intended to restore and re-sell microscopes; now he restores them but cannot part with them!

Grant Foden’s interest in microscopy started last year. He inherited his father’s microscope and bought himself a Watson Service. He recommended a book that he had found very useful in explaining many aspects of microscopy, Practical Microscopy. For example, he was on the verge of throwing away his dark-ground condenser when he saw the ray diagram that helped him understand that the condenser has to be in exactly the right place to illuminate the specimen. 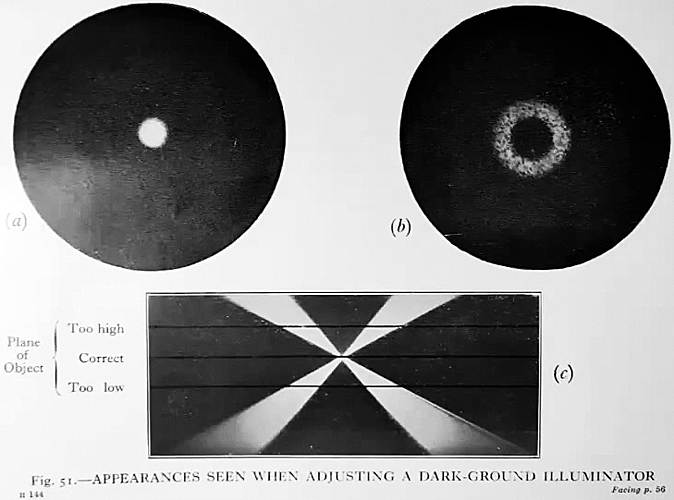 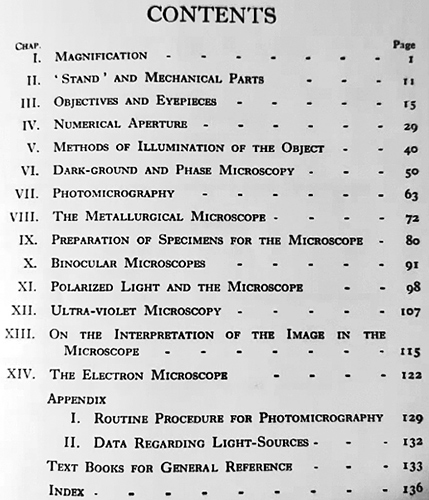 Les Franchi was given a brass Hartnack microscope for his 15th birthday, and later bought a Watson Kima that he still has. His book recommendations included:

Les used his Kima horizontally for photomicrography, with a camera that used 2½ × 3½ inch plates. 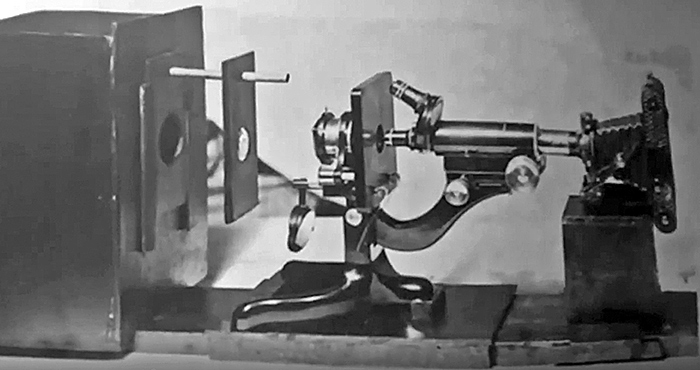 The first microscopy book that John Gregory bought was The Microscope Made Easy, followed by Practical Microscopy, Microscopy on a Shoestring and Photography Through the Microscope.

Graham Matthews recommended a couple of books for freshwater specimens:

Jacky McPherson was fascinated by Strange Worlds Under a Microscope, a book owned by her future husband around 1964. It has lots of line drawings and descriptions, but no photographs. Jacky also recommended How to Know the Freshwater Algaewhich is very good for identifying algae, and Introduction to Freshwater Algae. 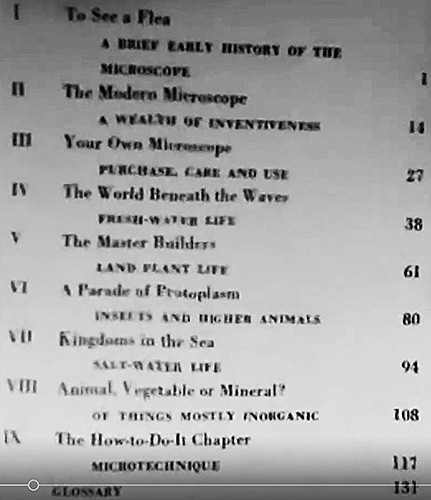 Contents of Strange Worlds Under a Microscope

Around the same time, Jacky and her future husband followed instructions in Scientific American and made a Leeuwenhoek-style microscope in a box, with 3 spherical lenses of different sizes. Jacky’s first modern microscope was a second-hand Watson Kima, which she bought from Brunnings while she was at university; she still has it.

Back in 1968, Robert Muston thought he would like to investigate microscopy, and before buying a microscope he bought a copy of Freshwater Microscopy and read it cover-to-cover. He admired the line drawings, especially those of Daphnia and rotifers by Eric Hollowday. He wasn’t able to afford a microscope in those days, and it was not until thirty years later when he retired (in 1998) that he eventually bought his first microscope; he hasn’t looked back since. 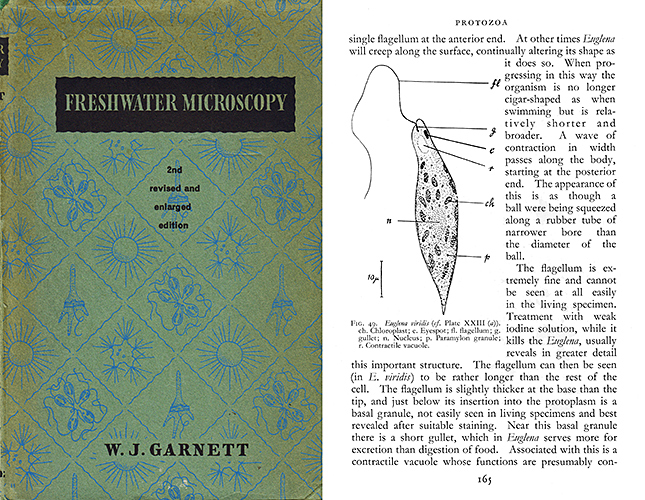 Soon after starting microscopy, Tony Pattinson bought a copy of Collins Field Guide to Freshwater Life that covers just about everything, including plants, fishes, Protozoa and diatoms. Tony likes it so much that he has 2 copies, one that stays at home and one for field trips such as Quekett excursions. Tony recommends the edition by Fitter & Manuel, not the more recent editions. 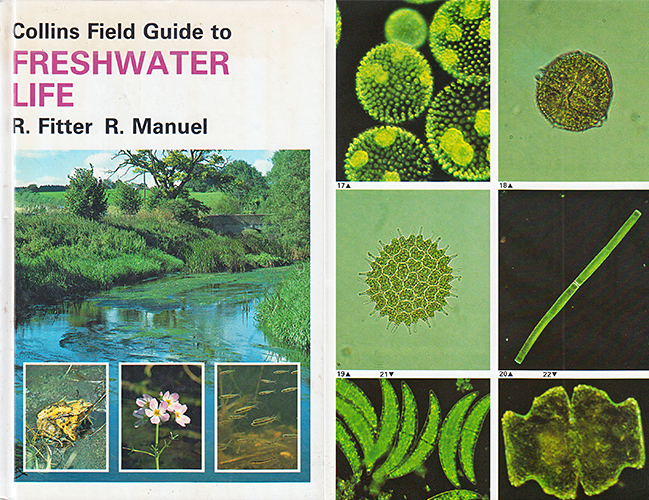 Robert Ratford got started with Simple Experiments with Microscopes, one of a series produced by the Milk Marketing Board. It has simple diagrams and line drawings to explain things, and a series of projects suitable for children. Robert graduated from a toy microscope via a Lomo to a Nikon Labophot by the time he was 18. For entertainment, because many of the substances can no longer be used, Robert suggested The Microtomist’s Vade-mecum.

Paul Smith provided details of 4 books that got him started in microscopy in a PowerPoint presentation:

Alan Wood’s enthusiasm for microscopy started in the sixth form at grammar school. There was a store room next to the biology laboratory with every chemical you could wish for, including ethyl alcohol, xylene, clove oil, Canada balsam and stains, and the zoology teacher was happy for sixth-formers to make slides. The biology library included Elementary Microtechnique with procedures for all sorts of specimens and recipes for fixatives and stains, but it was almost always out on loan and so Alan bought his own copy even though it was very expensive at 45s. 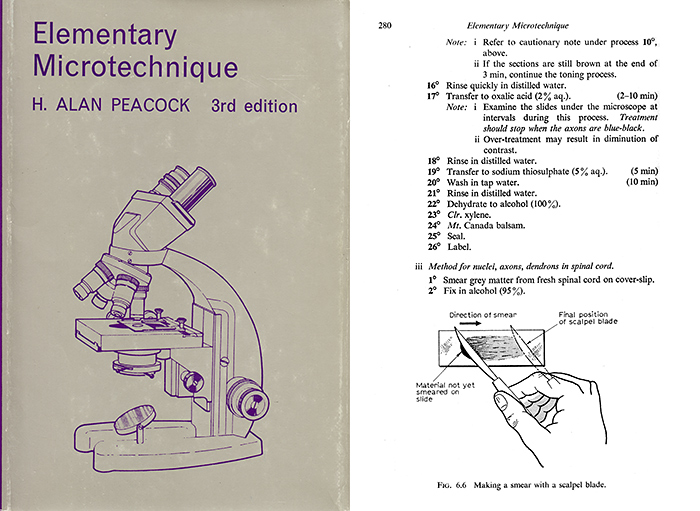 Alan had always been interested in ponds and streams, and to help identify specimens he bought The Young Specialist Looks At Pond-Life for 12s 6d. This book has lots of descriptions and illustrations of plants and animals, including ones that you need a microscope to see properly. 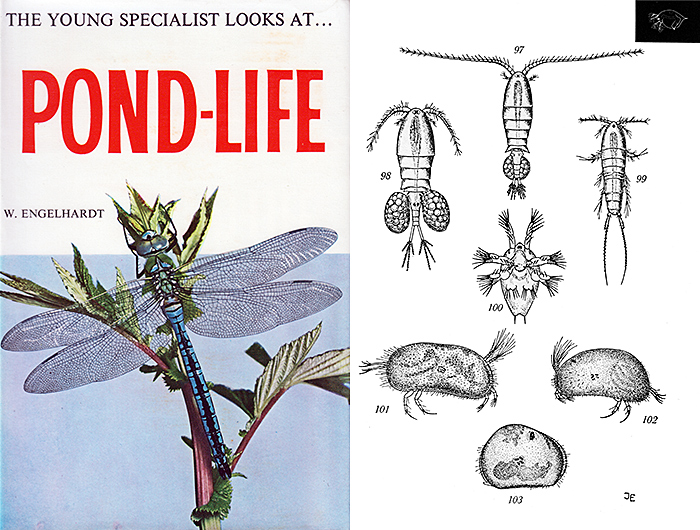 Alan had never heard of stereomicroscopes then, but the school had several Watson Kimas. Alan saved up and bought a used one for £32:10:0 that included a 2″ objective with a field of view of a few millimetres. 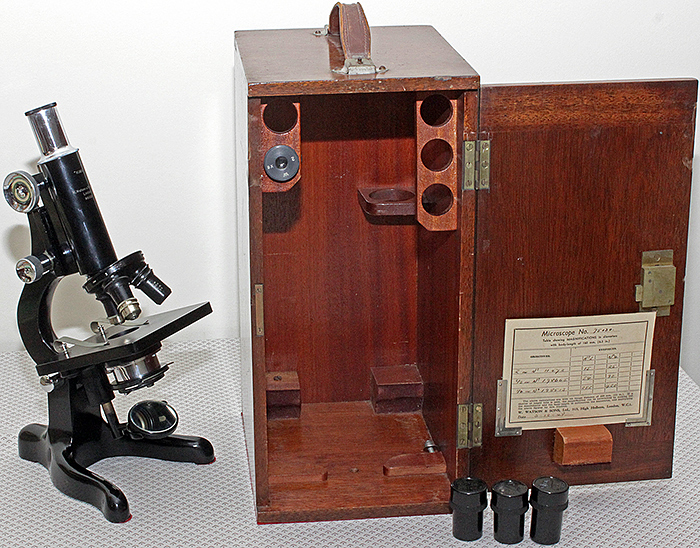 John Zukowski came into microscopy as an extension of his hobby of photography and he recommended a recent book, An Introduction to Digital Photomicrography.

Lisa Ashby asked for suggestions about books on geology.

This led to a discussion of whether a polarising microscope is necessary. Most members seem to manage with a normal microscope by using one polarising filter on top of the light source and another (the analyser) above the specimen. Locations for the analyser include on top of the slide, on top of the turret dovetail, or in the recess below the head. The Club sells polarising film and retarders. Suggestions for makeshift retarders included the clear wrapping of greetings cards, windows in cake boxes, parts of the hard plastic of CD-ROM boxes (pushed out with a cork borer heated in a Bunsen burner) and mica windows for heaters.

Gordon Brown recommended Polaroid Laboratory J-Filters that are sometimes available on eBay. They are rigid, unmounted and marked with orientation; a pair of grey 330 gives excellent extinction (the brown 310 are not so good).

Julian Gray recommended using the screw mount (for supplementary objectives) that is present on some stereomicroscopes to attach a linear polarising filter from a camera for viewing specimens in transmitted polarised light.

John Zukowski asked how to remove an objective that was screwed tightly into a turret of his Olympus CX33. Tony Pattinson and Les Franchi recommended a strap wrench such as a Boa Constrictor, available in a range of sizes. 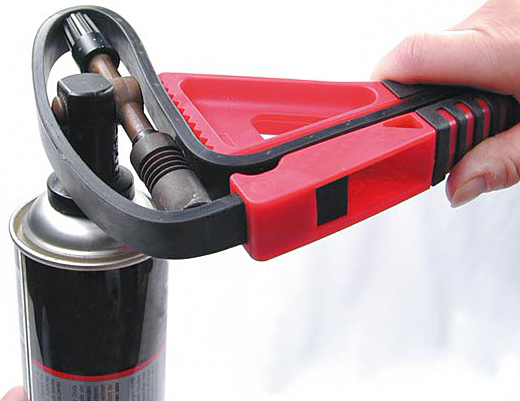 Jacky McPherson has been busy processing samples from the 1kg of Oamaru diatomite that she received 4 years ago, and she showed some of her photomicrographs, including diatoms and spicules. 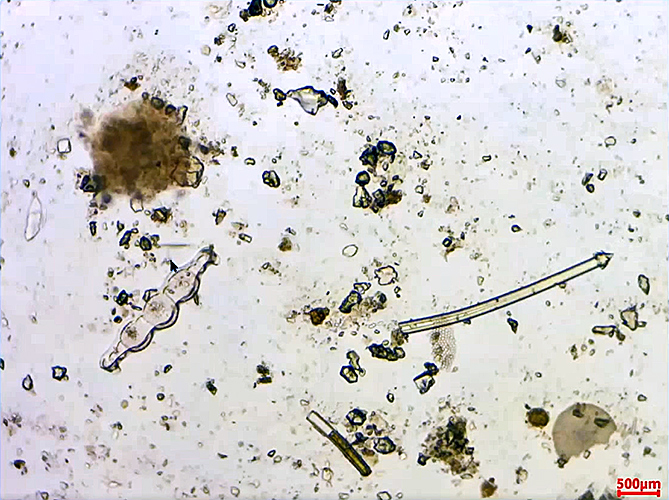 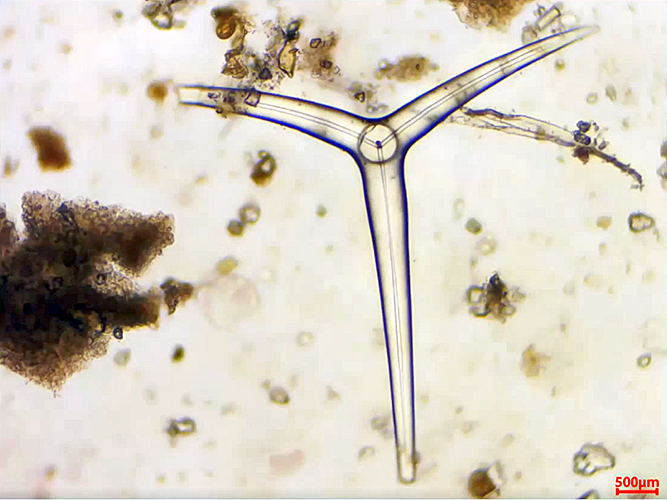 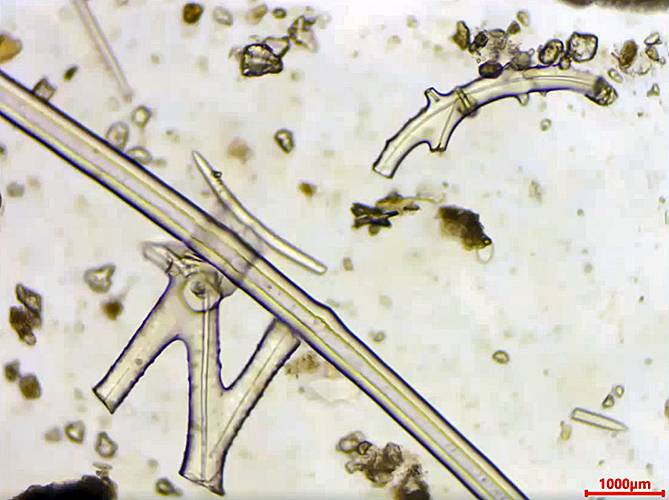 Gordon Brown showed us a photomicrograph of bath sponge spicules in the book that got him started in microscopy. 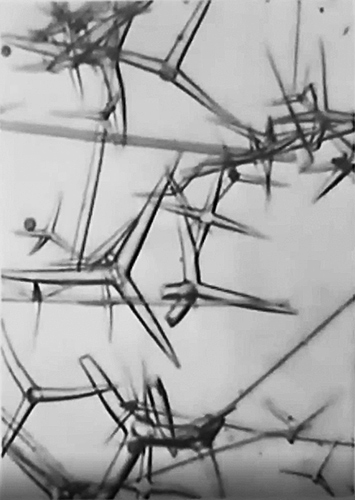 Jacky sometimes gets sidetracked into looking at live specimens, such as this Stentor: 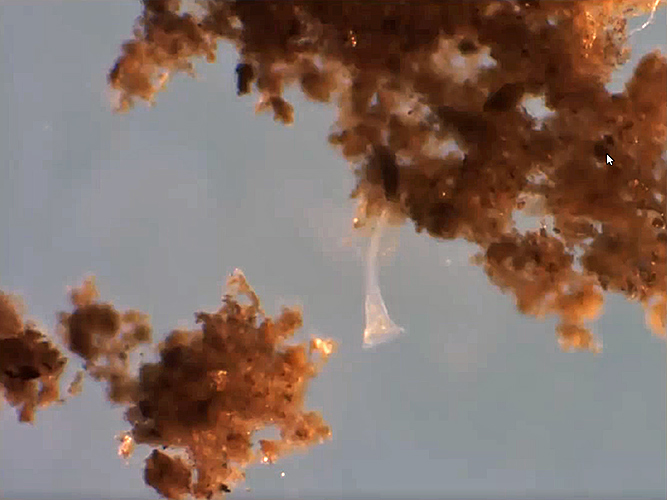 Tony Pattinson gave us an update on his experiments with d.i.y. DIC using Sanderson prisms, exploiting the photoelastic properties of polycarbonate. Tony is using a sheet 6 mm think and applying stress to produce a gradient of refractive index and image splitting with a zero-order fringe in the middle. 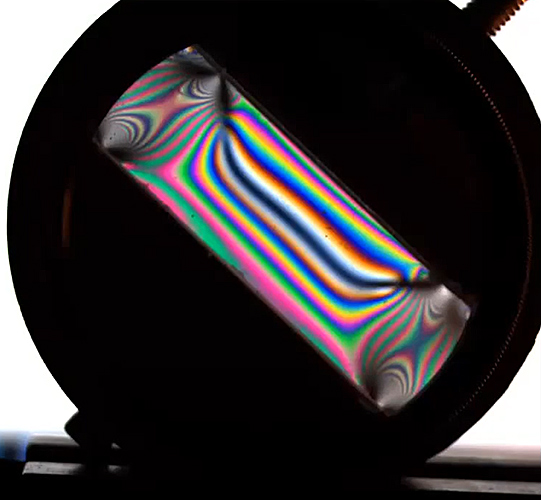 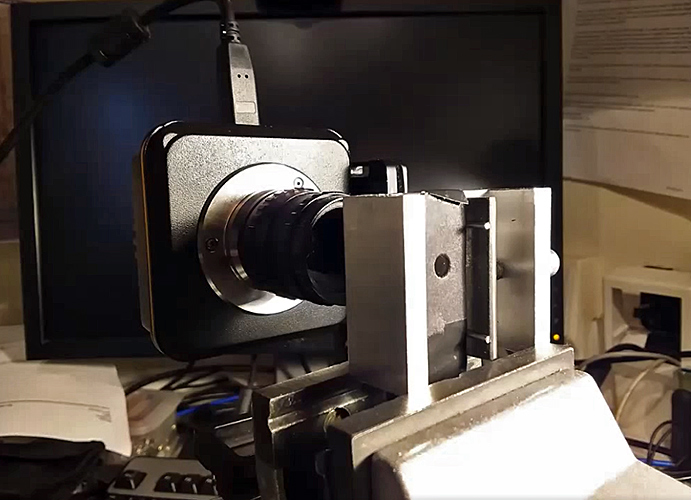 Tony has succeeded in producing a doubled image, and by rotating a polarising filter he can eliminate either of the images.

Doubled image of a steel ruler through stressed polycarbonate sheet

Tony’s experiments so far have produced something that could replace a Wollaston prism in the substage. The next stage will be more difficult, trying to produce a similar arrangement to go in or above the back focal plane of an objective where space is limited.

Quekett member A. Loro experimented with stressed polycarbonate film and published papers in the Journal that are available on the USB drive.