The first Quekett meeting of 2021 was held via Zoom instead of face-to-face because of the restrictions to deal with the COVID-19 epidemic, a situation that seems likely to continue for at least a few months. On the bright side, by changing the start time to 6:00 p.m we have made it possible for members in the Americas to participate as well as those in the UK and mainland Europe.

Paul Smith showed an unusual item, a cheap inverted biological microscope from the Chinese company TelMu. It runs on batteries, it is monocular, and it comes with standard size 10× and 16× eyepieces and non-standard 4×, 10× and 20×  long working distance objectives. It is quite light, so cameras that fit in the eyepiece tube can be used but a mirrorless or SLR camera make it tip over. The image quality is good for the price, and it is available on Amazon and eBay.

Gordon Brown showed us the automatic photo stacking device he has built. 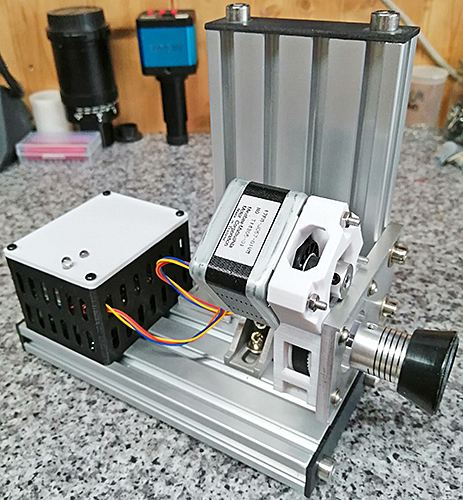 Arduinos (in box on left), stepper motor and rubber coupler

The system is based on a modified version of the Stackduino-G3 designed by Pierluigi Giorgi, and all stacking settings are controlled by an Android app on a smartphone connected by Bluetooth to a pair of Arduino microcomputers. 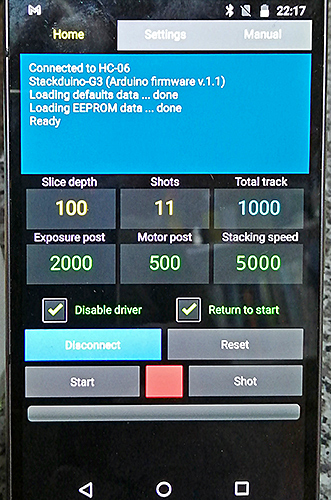 The primary Arduino Uno manages the Bluetooth connection and passes the control signals to a Nema 17 stepper motor via a small stepper driver. All of those electronics are built onto a prototyping board mounted above the Uno. The second Arduino Nano receives the shutter signal from the Uno and uses this to send a hexadecimal code via an infra-red emitter LED to an Eakins (Chinese) microscope camera. Because the infra-red receiver is mounted on top of the camera, a small reflector is used to guarantee reception. This system can be used to control virtually any camera that includes an infra-red remote to trigger the shutter (needs a small Arduino circuit to decode the signal from the remote, this being a once-only operation) and can be built without the use of any specialised tools from easily available components. One of the strengths of the system is that the configuration can be customised easily; Gordon’s version connects to the fine focus using a rubber sleeve, but magnets and clamps can also be employed. 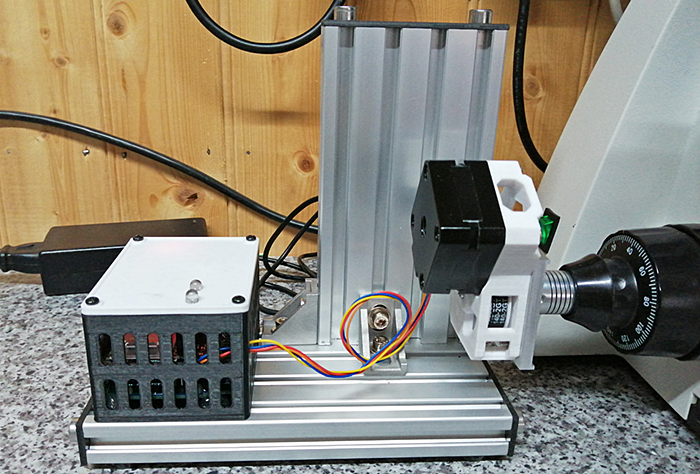 Gordon has also included a toothed belt reduction drive in his design that reduces the step size so that sub-micrometre movements of the stage can be achieved. The project will be written up fully for a future edition of the Bulletin. 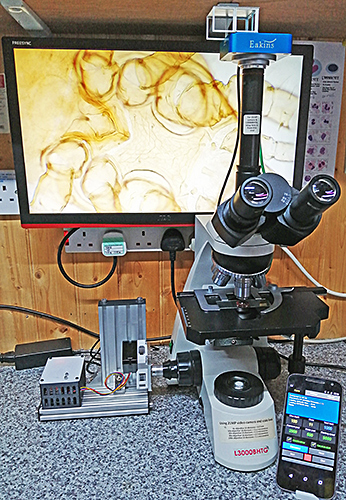 Stackduino with microscope and monitor

Aydin Örstan has previously asked for help in holding rotifer specimens that are mounted between a pair of coverslips. He has now found Cobb’s aluminum slide holders from Wageningen University that hold two 24×24 mm coverslips and fit in slide boxes for 76×26 mm slides.

Jeffrey Silverman showed an Improved Double and Single Microscope, manufactured by George Adams the younger of 60 Fleet Street London in the 1780’s, that he had won in a recent auction at Bonhams. 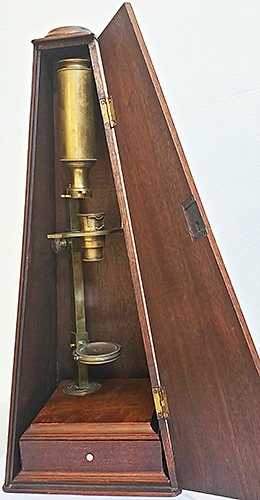 It came with a single-objective slider that was jammed in place and not original, but a friend had given him a correct 6-objective slider, although the 3 highest powers were missing.

The objectives are single bi-convex lenses, and the eyepiece contains two bi-convex lenses. There is another bi-convex lens just above the nosepiece that is intended to improve performance, and Jeffrey showed a photomicrograph that is astonishingly good for a microscope that is well over 200 years old: 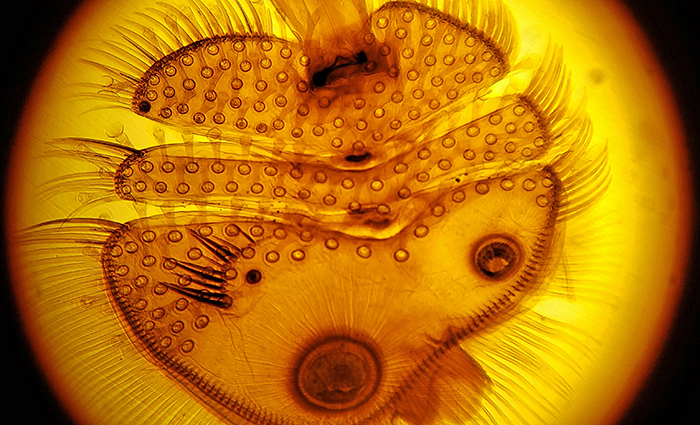 By unscrewing the tube, the compound microscope can be converted into a simple microscope: 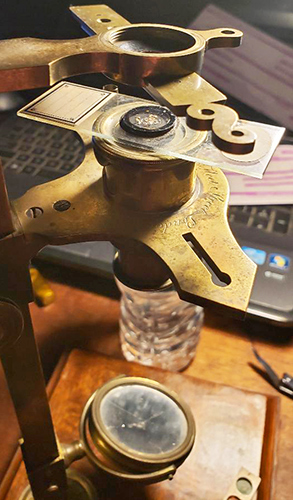 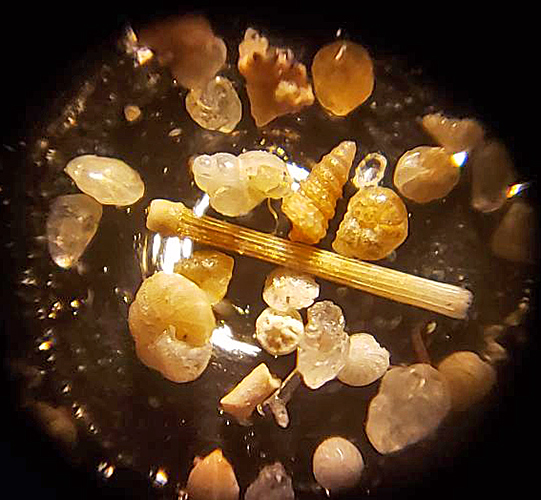 Brian Stevenson showed two hand-held microscopes by J. Parkes & Son of Birmingham. The smaller one was called the Child’s Portable Compound Microscope and has 2 clips for holding slides or parts of flowers, sea-weed or insects. 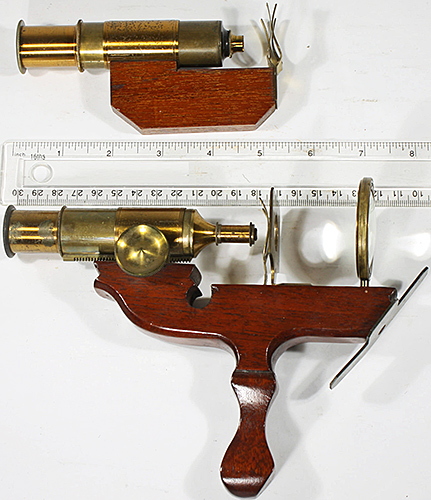 The larger one is Brian’s newest acquisition and was called the Improved Lecture-room and Parlour Microscope. The lecturer or owner could focus it on a slide and then pass it around the students or friends. It could also be stood on a table and used as a conventional microscope. 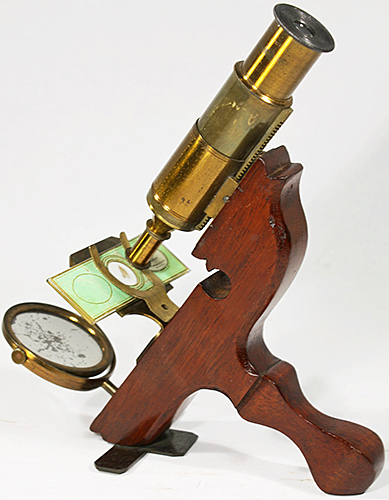 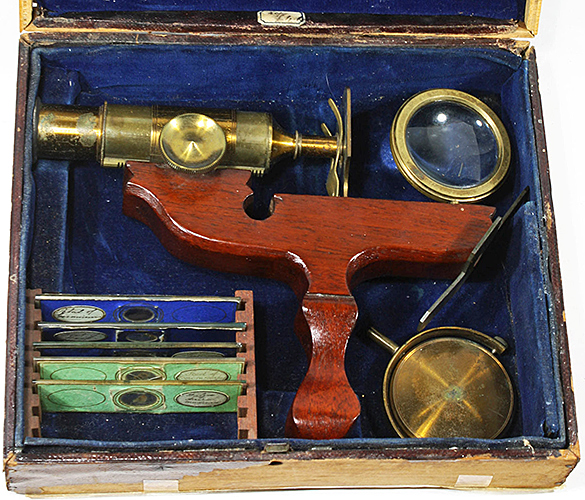 Parkes lecture-room microscope in box with mirror and condenser

There are lots more photographs of the Improved Lecture-room and Parlour Microscope in Brian’s post in the QuekettMicro Group.

Brian also showed a Watson & Son (not Sons) brass microscope that must have been made prior to 1883 when the second son joined the business. 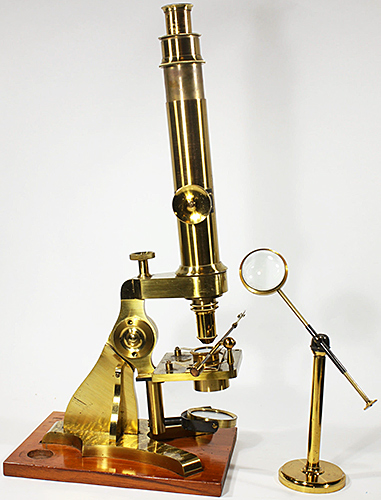 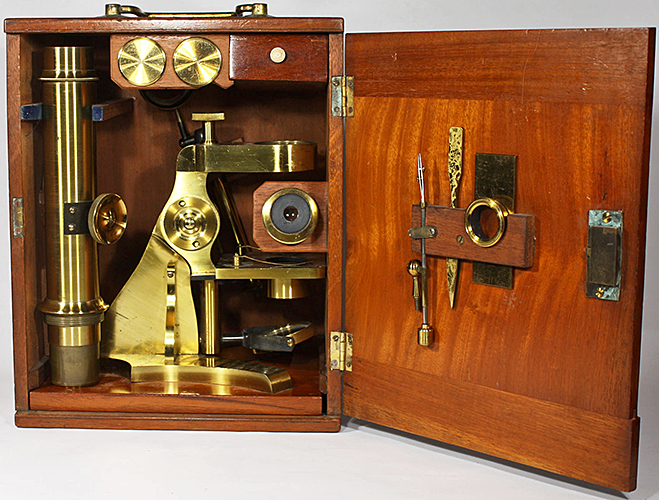 There are several more photographs of this Watson & Son microscope in Brian’s post in the QuekettMicro Group.

Lisa Ashby asked for a serial number to update the Watson Microscope Stand Dating Table, which Steve Gill has suggested that she take over, but this microscope does not have one.

Tony Pattinson showed an Olympus BH2-DA Drawing Attachment (complete with NFK 2.5× photo eyepiece) that he intends to use with his CH-2 microscope (it fits between the head and the stand) and gave us a live demonstration of how the intensity of the lighting through the microscope and on the paper needs to be adjusted so that both specimen and drawing are visible. Really, the more light on the paper the better, as the scope may then be run at a comfortable brightness level. The unit was bought on eBay for £100, and came in its original packing. A pencilled date on the box suggests that it was bought on 29/11/68. Tony doesn’t think it had actually been used, as the focus mechanism was frozen and the original silica-gel packs were present. It was probably purchased with a load of other gear when equipping a lab, put in a cupboard, and forgotten. It was simple enough to dismantle, but getting the sliding part of the mechanism to move involved mounting it in the lathe chuck (with paper padding), and applying pressure from the tailstock. Once moving, it was just a matter of removing the old grease and re-lubricating it. Everything else was in pristine condition. 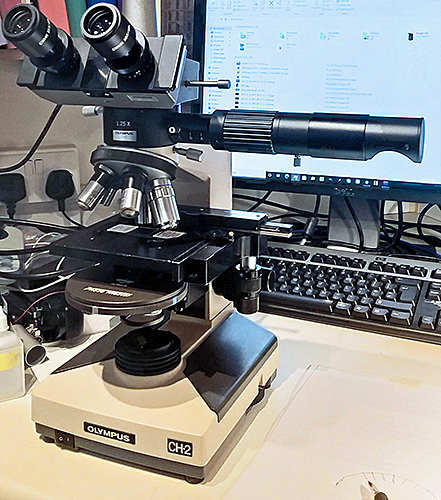 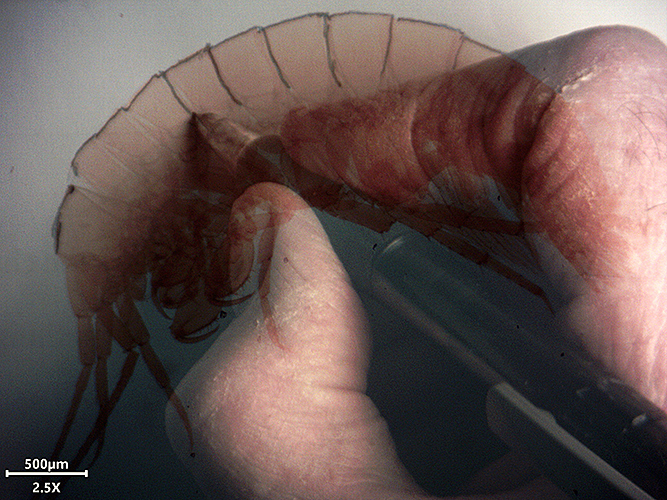 View through eyepieces with the specimen and the drawing visible 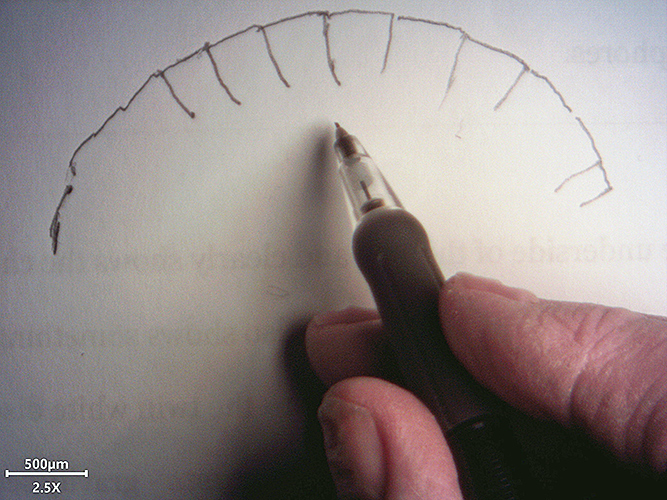 View through eyepieces with insufficient light through specimen

Alan Wood offered a free PDF of the Olympus BH2-DA Drawing Attachment instruction leaflet, but Tony had already found it.

Lisa Ashby reminded us that earlier drawing equipment was much simpler, and attached to an eyepiece tube, for example the Watson-Abbe Camera Lucida: 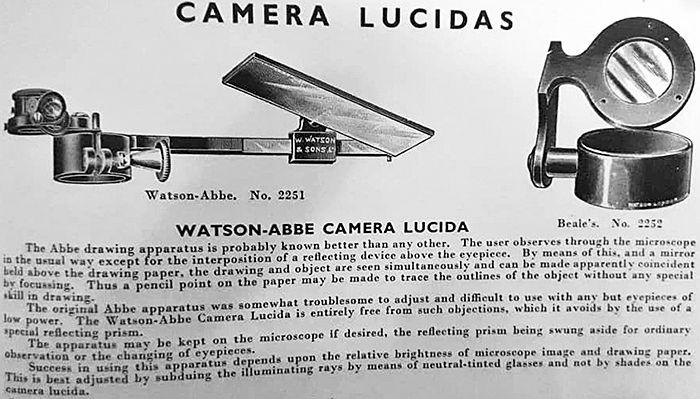 Some time just before Christmas, Tony Pattinson came across a post in the Facebook QuekettMicro Group showing a link to a paper on an inexpensive method of producing DIC with the use of Sanderson prisms. He had never heard of them at all and, frustratingly, the paper was behind a pay-wall. He hadn’t time to chase the matter for a couple of days, by which time all traces of the post had gone. An extensive search turned up an earlier reference to the prisms, in a paper by Sanderson on their use as a substitute for Wollaston prisms in a differential interferometer. They turned out to be simple bars of optically-clear polycarbonate which exhibited image-shear when subjected to a bending moment. The test prisms looked simple enough for Tony to make, and he was interested to take matters further, once he had found some more about their use in microscopy. He ordered some polycarbonate sheets of several thicknesses, so that he could play with it and get a feel for its optical properties. More diligent searching turned up the source of the inaccessible paper, and he managed to find some of the images from it – but they weren’t so useful without the supporting text. During the gossip meeting, with so many attendees, he suddenly thought of using the chat channel to enquire about possible access. Tony was delighted to find that, within a few minutes, he had the promise of a PDF after the meeting. Indeed, there were several offers to choose from, but Rachel Sammons was first off the mark, and he is now digesting the contents of the paper: Sonika Rathi, Nicholas Zoubek, Vivian J. Zagarese & Daniel S. Johnson, “Differential interference contrast microscopy with adjustable plastic Sanderson prisms”, Applied Optics 59, 3404–3410 (2020).

It may come to nothing but, just now, Tony has plenty of time for playing about. Coincidentally, there was also a recent post by Saulius Gugis in the Facebook Amateur Microscopy Group, who may have already made a working system. Tony believe he’s a member of the PMS and will be publishing in Balsam Post. Tony enquired if Saulius was using stressed polycarbonate prisms, to which he agreed, but he didn’t seem to have heard of the papers that Tony found.

Danny Ferri recently needed to replace the bulb in his refrigerator and found Tungsram LED 1.6W E14 SES replacements in Waitrose for £2.00 for 2 bulbs. They fit an E14 socket, and their light output is 140 lumens at a colour temperature of 2700K. He was impressed with the even illumination, which he prefers over the familiar Ikea Jansjö lamps. 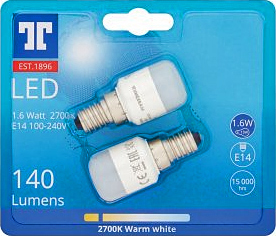 Alan Wood is a member of the Olympus Microscope Users Group on Facebook that was set up by Robert Ratford and now has over 2000 members. A few months ago, a former Olympus employee in Germany who is also a member of the Group decided to have a clear out and offered a lot of Olympus documents free to anyone who could make good use of them. Alan agreed to take them and see what would be suitable to add to the collection of free PDFs of Olympus documents on his website (Olympus microscopes and photomicrographic equipment).

A 10 kilogramme parcel arrived from Germany, and he has been sorting out the documents. Most of them are numbered internal Olympus Technical / Marketing Information documents, a few hundred of them in 2 bulging lever arch files, dated from January 1994 to April 2005, so they are mostly about the infinity-corrected AX, BX, CX, IX and SZX models that not many amateurs own yet. 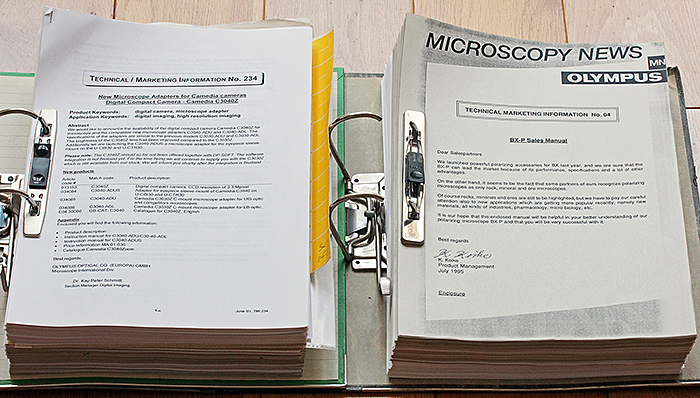 He has sorted them into English and German ones and prepared indexes that he has uploaded to the Files section of the Users Group on Facebook. Anyone who is interested in particular documents can let Alan know and he will try to find time to scan them. 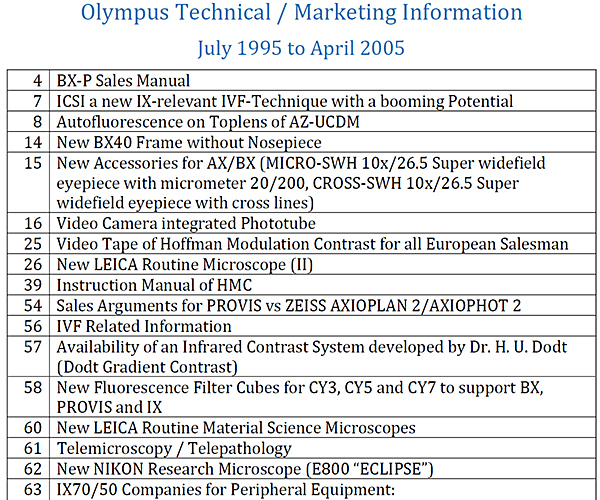 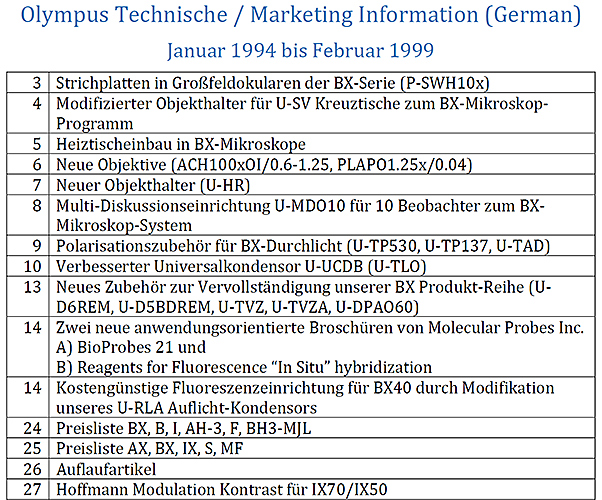 Some of them are not important for Olympus users, such as notifications of errors in price lists and announcements of new price lists and brochures that Alan does not have. Others are much more useful, such as compatibility tables for the various DIC sliders and DIC prisms and UIS objectives, and details of how to obtain dark-ground with all sorts of UIS objectives. 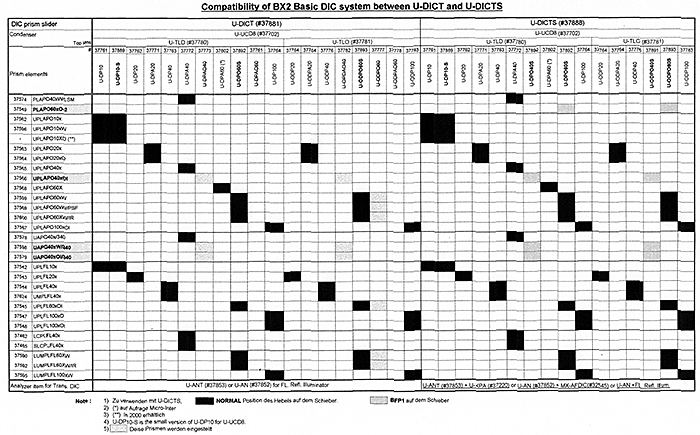 There are also lots of new product announcements, comparisons of Olympus microscopes with their Leica, Nikon and Zeiss competitors, and all sorts of information on setting up, modifying and troubleshooting microscopes and cameras. 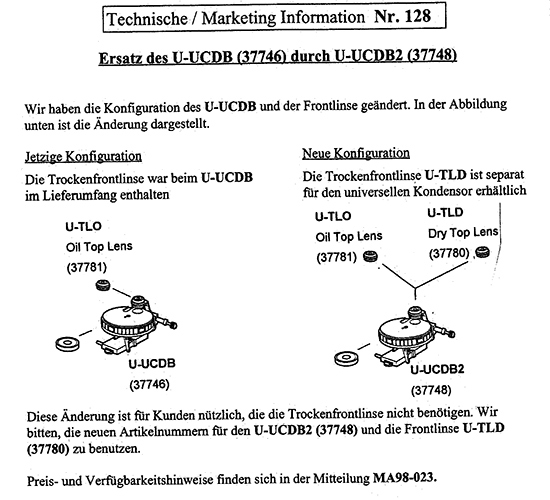 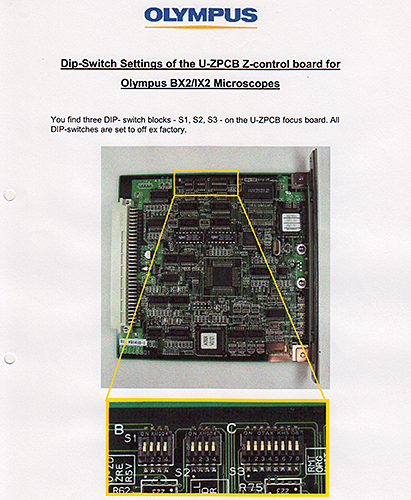 Alan probably won’t put any of these documents on his website because Olympus have asked him not to include documents for their infinity-corrected microscopes, and because some of them were clearly not intended for public consumption, but he will scan them for anyone who is interested.