Despite being attended by slightly reduced numbers due to the current Covid-19 situation, the annual convention of the Reading Microscopical Society went ahead as planned. It was again organised by Mike Woof and held in the familiar venue of St Peter’s Church Hall in Earley, just outside Reading. The morning was devoted to exhibits and sales, followed by a break for lunch and then a quiz and a presentation in the afternoon.

The Hall was opened at 9:00 a.m. with the first hour for setting up. As usual, there were some interesting exhibits as well as a good range of microscopes, objectives, eyepieces, accessories and slides for sale, but not many books this time.

The Reading Beekeepers Association was in attendance for the first time, represented by Jenny Morgan, Claire O’Brian and Mike Dabbs and showing a number of bee parts under the microscope. They were additionally selling honey and wax wraps (cotton squares impregnated with wax to be used as an alternative food wrap to cling film). 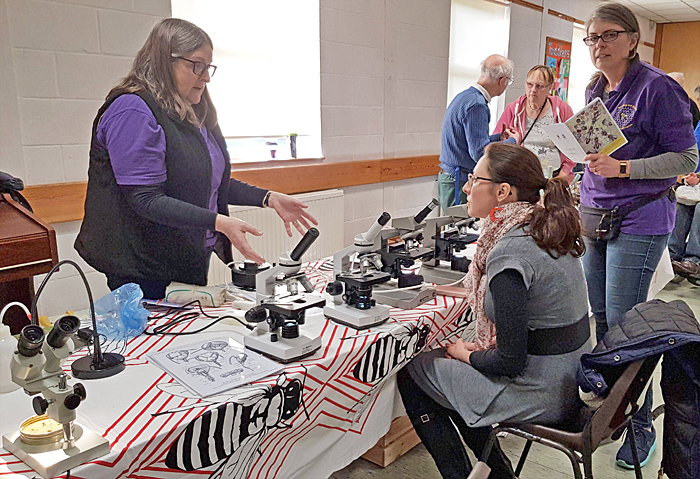 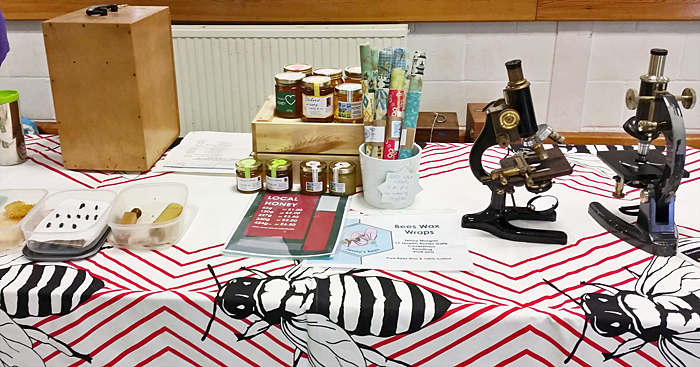 Joan Bingley demonstrated the effect of matching refractive indexes with a glass rod immersed in liquid; it was impossible to tell the length of the rod. She brought three books by Gilbert Hartley (the original source of the bottle and rod) that cover refractive index, Hartley’s Microscopy, Teach Yourself Microscopy and The Light Microscope: Its Use & Development. Joan also brought a copy of the new book by Jeremy Sanderson, Understanding Light Microscopy,  allowing attendees to browse this tome reviewed in the Summer 2019 issue of the Quekett Journal of Microscopy. 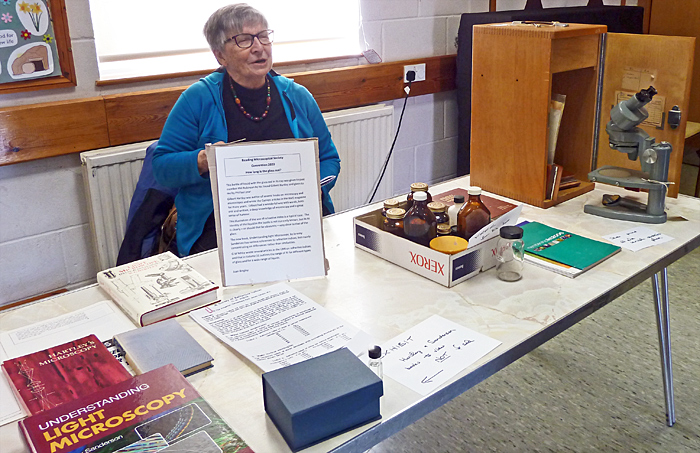 Glass rod in liquid of the same R.I.

Joan also had a selection of items for sale, including a stereomicroscope with its wooden case, from various members, and she sold the lot!

Pam Hamer brought the small stereomicroscope and some specimens that she uses to interest children at family outreach events. Her specimens included a £1 coin (with microwriting), a £5 note (with microwriting and a fluorescent section), macro and micro fossils, and small pieces of meteorites. Pam also demonstrated how layers of colourless polarising film can generate a coloured image of a duck, and how mobile phone screens, mesh tea bags and synthetic garment fibres appear through polarisers. 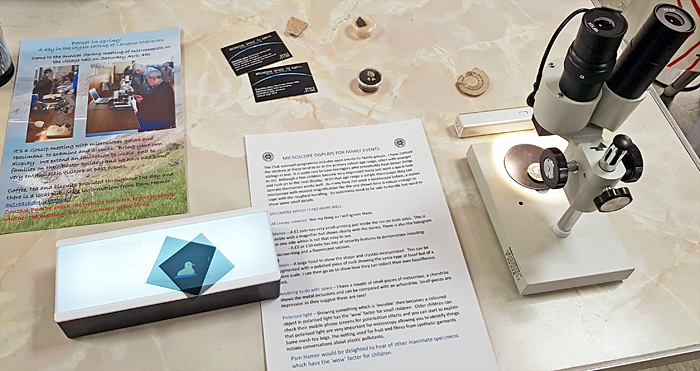 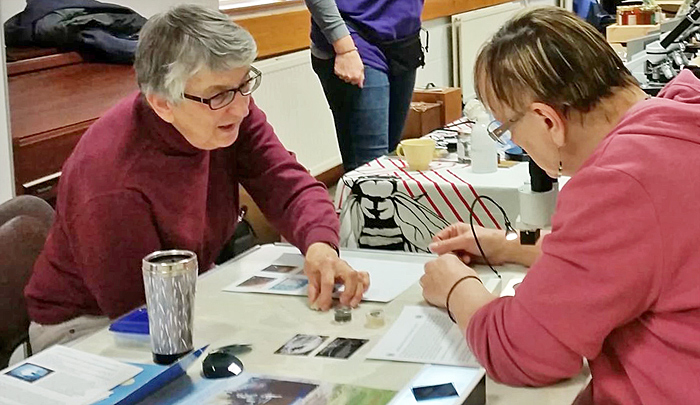 Stephen Parker used a PZO Biolar microscope with two Z phase contrast objectives and matching condenser to demonstrate the effect of phase contrast on resolution. The Z objectives contain two phase rings, one for negative contrast and one for positive contrast; the one for negative contrast is larger. The matching phase annuli in the condenser are covered by polarisers at 90° to each other, and rotating another polarised below the condenser enable one annulus or the other to be used. Stephen used a test slide of Pleurosigma angulatum to demonstrate that the dots could be resolved using negative phase, but not with positive phase that uses smaller rings. Stephen also brought some slides of crystals and demonstrated that some of looked better under positive phase than with crossed polarisers. 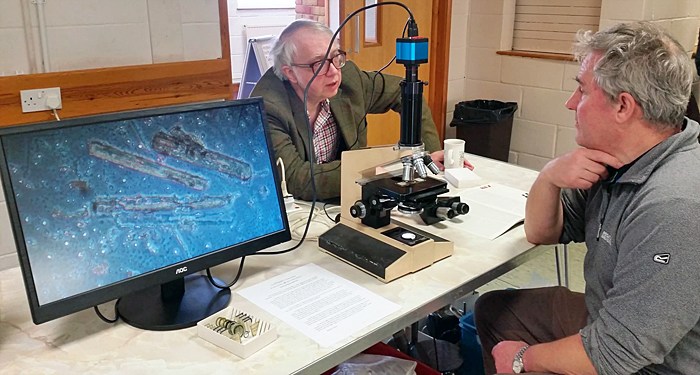 Steve Gill had a number of older microscopes for sale, a petrological microscope, some CDs, some brochures, some lantern slides and new spiral-bound copies of Horace George Barber’s Miscellaneous Diatom Plates. 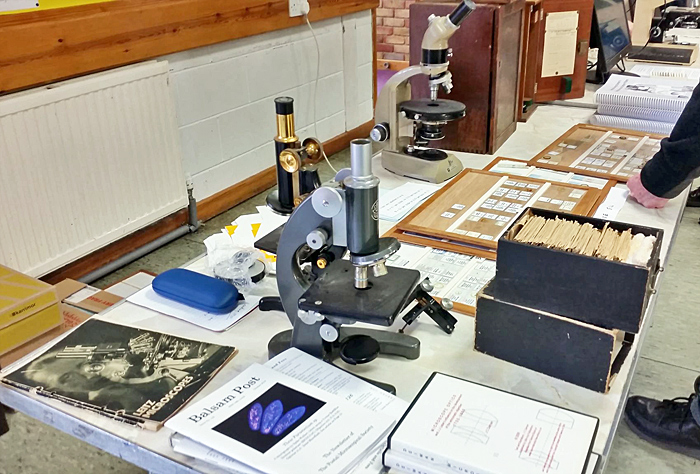 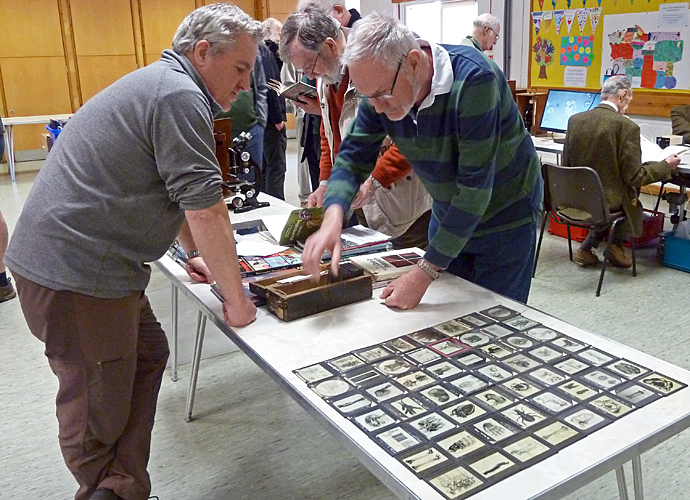 Nigel Williams bought the lantern slides, and he intends to show them at the Annual Exhibition on Saturday 3rd October 2020. 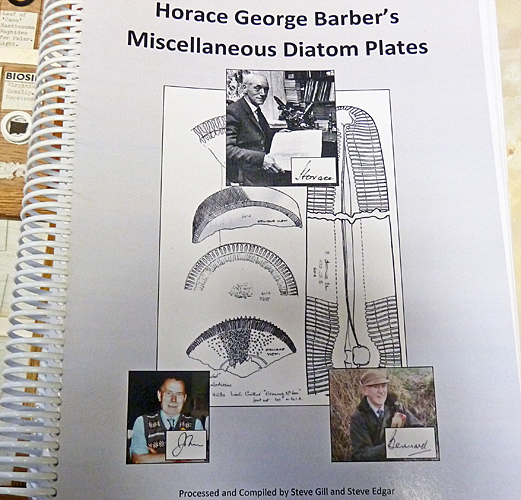 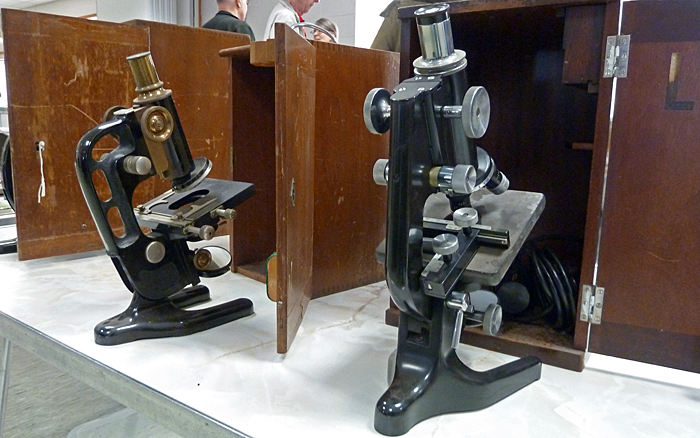 Some of Steve Gill’s microscopes

Lee Heffer and Steven Heffer had a large selection of cerebellum slides for sale from various species including cat, dog, rabbit, chimpanzee, tiger and human. 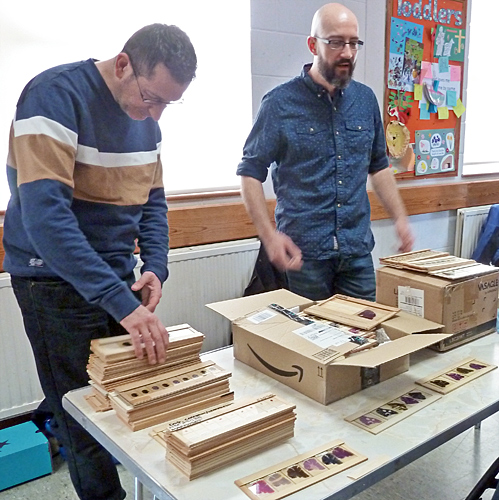 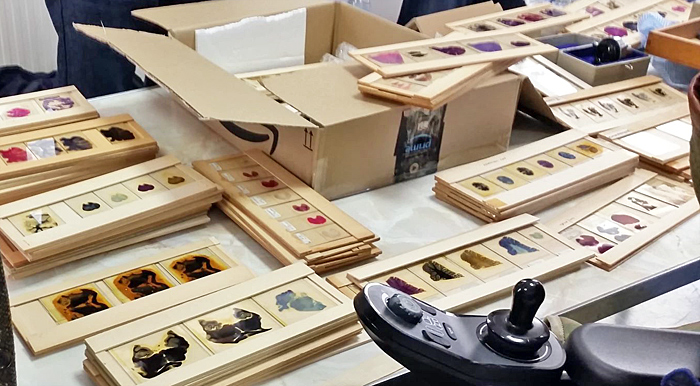 John Millham had a good selection of newer microscopes (including trinocular and inverted models) and lots of accessories available. 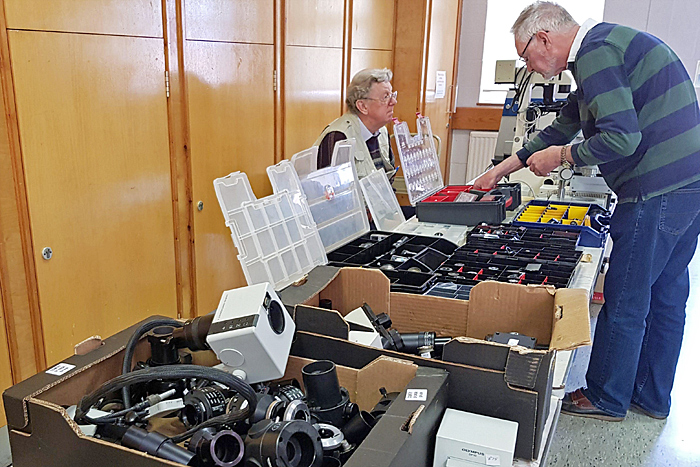 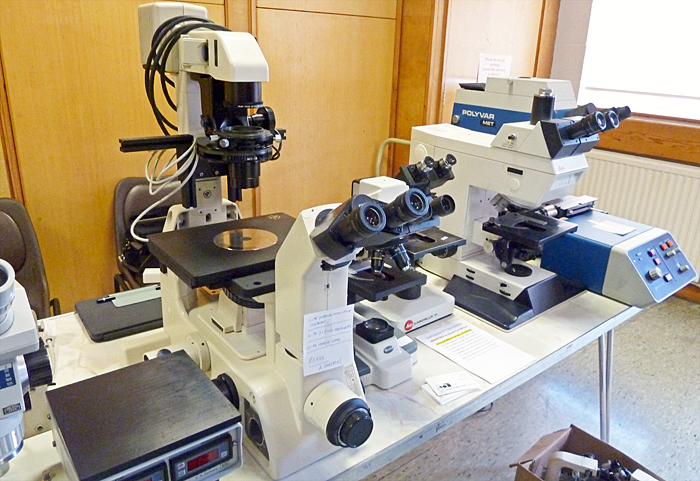 Some of John Millham’s microscopes 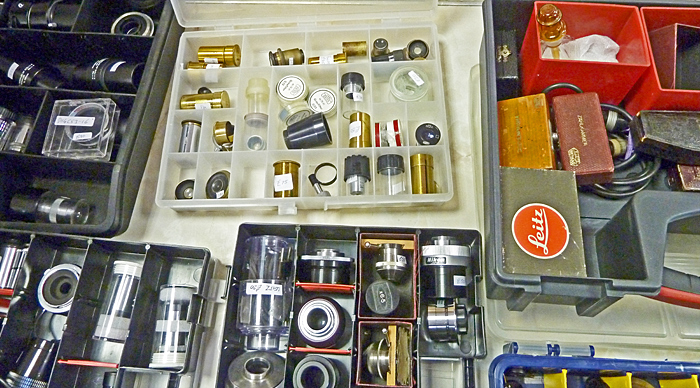 Some of John Millham’s accessories

Mike Samworth was selling slides at bargain prices, including some that he had made and some by Biosil 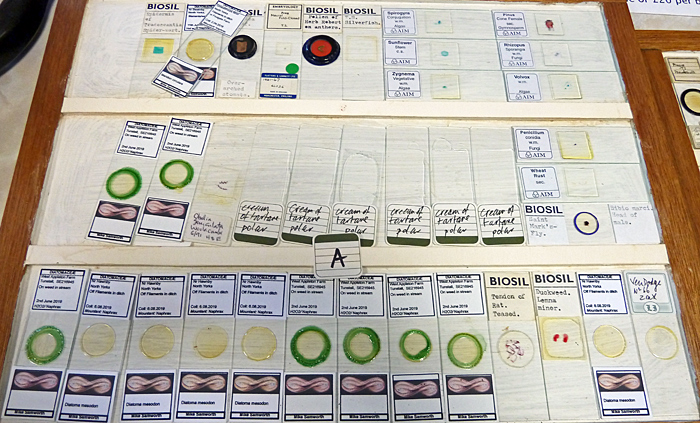 Mark Shephard had a range of slides for sales, including several by Dancer and some antique rock and mineral sections sold by Newton & Co. 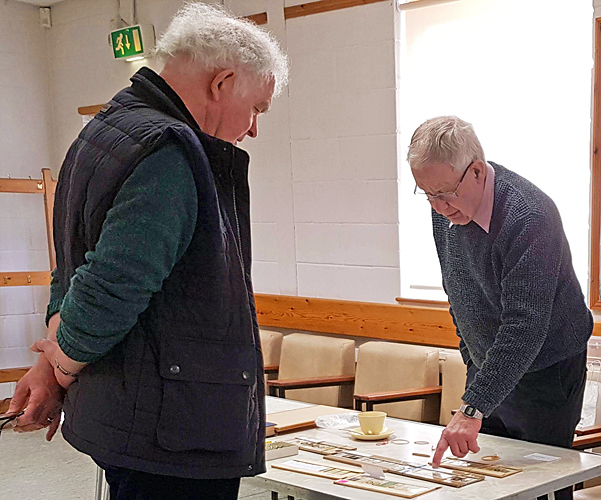 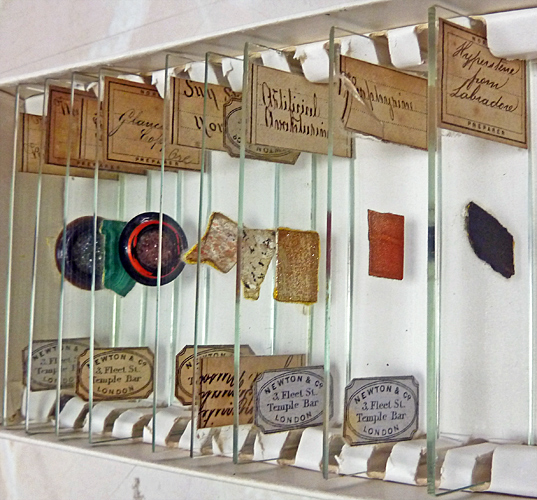 Joan Bingley and Robert Ratford brought the Quekett Shop, with some books and binders, and made some sales. 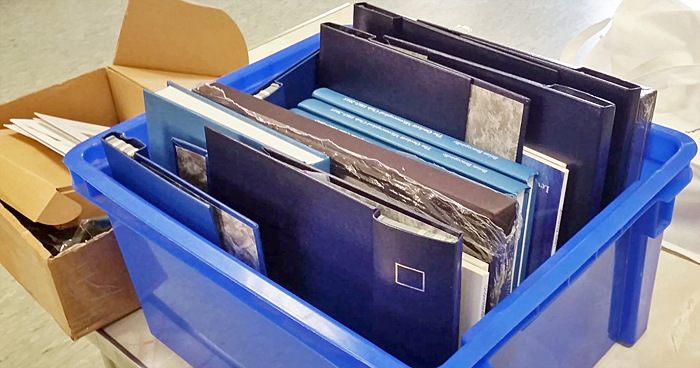 After lunch, visitors returned for the afternoon session. Joan Bingley engaged us in a quick quiz based on Dingbats, which was most entertaining.

This was followed by Steve Gill who decided at the last moment to change his intended presentation subject and talked instead about a collaborative project on Palomena prasina, the Common Green Shieldbug, that he has been working on with Mick Chaplin, Colin Kirk, Simon Kirk, Jeremy Poole, Mike Samworth and Mike Smith. The presentation encompassed life-cycle, anatomy and morphology and generated lots of discussion and questions throughout, as well as praise for the SEM images Jeremy had contributed to the project. 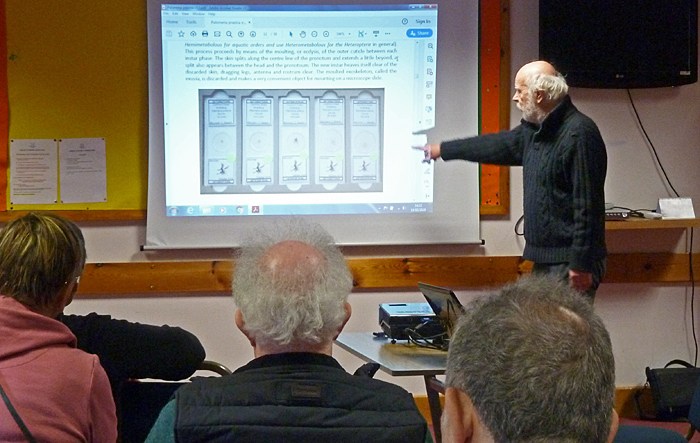 Our thanks to Mike Woof for organising another enjoyable day for microscopists, and to everyone who put on exhibits for us or brought along items for us to buy at bargain prices.