Whilst many Quekett members will be PMS members too, for those who are not, and for those visiting this exhibition for the first time, perhaps it is as well to describe a little of the history of the Society.

In the first half of the nineteenth Century, vast improvements in the optical microscope, heralded a surge of interest in the instrument, both from scientists but also interested amateurs from all walks of life, notwithstanding the need for some awareness and indeed sufficient funds. For a number of Victorians it became a recreational activity, and a number of societies were set up, of which nationally there are only now a few, principally the Royal Microscopical Society (RMS) the Quekett Microscopical Club (QMC) and the PMS.

The origin of the society is thought to be a letter written by Alfred Allen to the monthly periodical ‘Science Gossip’ in 1871 suggesting the idea of a postal club involving exchange of slides and knowledge. Two years later a Mr Alfred Atkinson sent in a similar letter to the periodical, which started a dialogue that resulted in a dozen members forming a society. 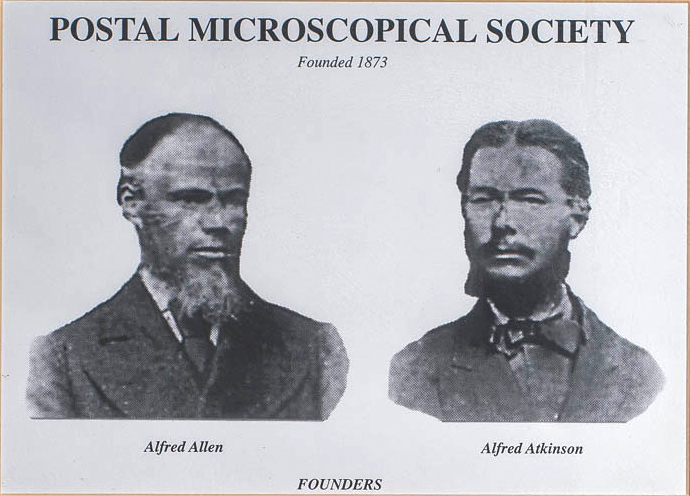 Unlike now, where a box of (usually) a dozen slides, with notes in a notebook are sent out onto each circuit, in the early days a box started with just one slide. Each successive member then added a slide, there being a dozen by the end. When the box was re-circulated each member took their slide out and replaced it with another. 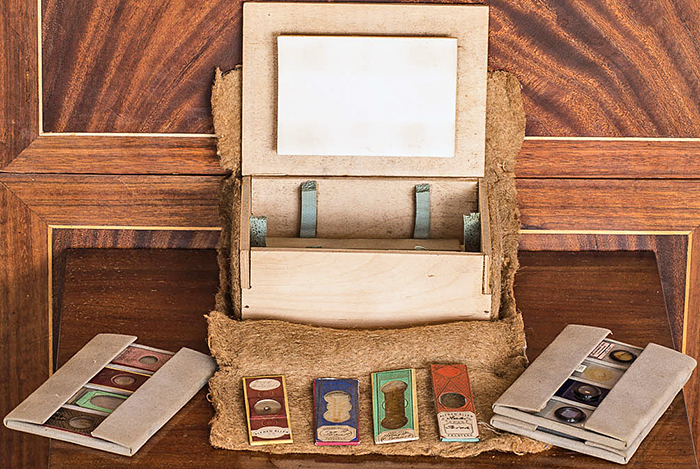 An old posting box for slides, with some Alfred Allen and Alfred Atkinson slides

Later, as numbers increased, the Secretary and some other members made the notes and drawings to accompany the slides. The Society has some of these notebooks, and they often include impressive illustrations. Members were also offered a Journal, the first being in 1882, and bound copies of these are sometimes found at antiquarian book fairs, and have considerable scientific value, even today. 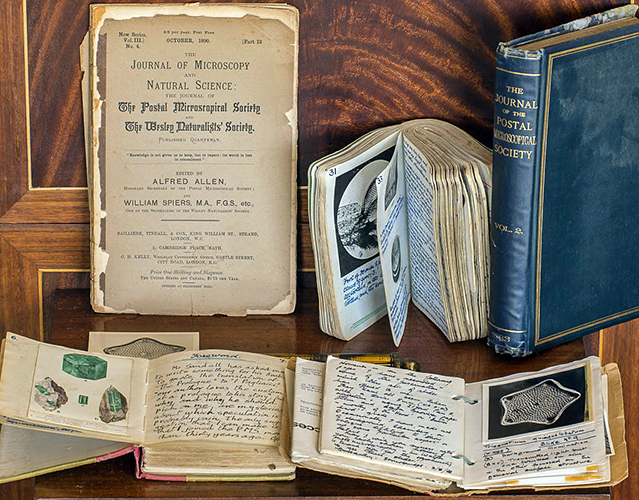 So, what happens in the PMS in modern times? The principal objective, the circulation of boxes of microscope slides illustrating the work of members and/or that of professional mounters is still the main function of the Society. Members are organised into ‘Circuits’. Boxes of slides are circulated, at four week intervals, accompanied by notebooks in which each recipient records his comments, criticism, and perhaps additional notes on the mounts themselves, before passing the box on to the next member of his ‘circuit’. As each box will normally contain 12 slides, each member has the opportunity to study many different slides during the year. It is rare indeed to receive a box which does not provide some level of interest and enjoyment to all individuals regardless of their ‘main field of interest’; often the difficulty is to part with it. Members are actively encouraged to participate, by making their own slides available for circulation, and this aspect is the ‘life blood’ of the Society. The members are mostly amateurs with an interest in the microscope and microscopy, so the subject matter varies greatly. Some are interested in instrumentation, or techniques, others specialise in petrology and making thin rock sections, others are fascinated by the hidden microscopical world to be found in water, such as diatoms or Protozoa. 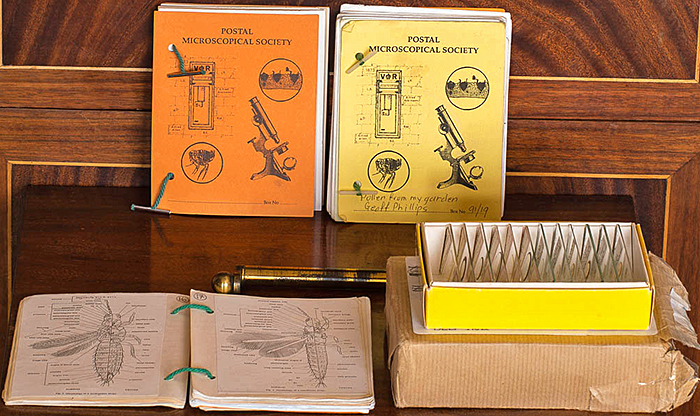 The essence of the Society is the friendly and helpful interchange of information. Help is offered to beginners and experts alike by fellow members with experience or specialised knowledge in particular fields. Thus, help is only a postage stamp/phone call/e-mail away and the beginner has access to a mine of information.

Balsam Post, the newsletter of the Society, is published four times a year. Written by the members for the members, this is another source of advice, news, help and guidance. The aim is to provide information and instruction to be practical and helpful. There are currently many back issues which can be supplied and these alone provide a wealth of reading and helpful information. All members are encouraged to write for Balsam Post on any subject allied to microscopy and natural history. A comprehensive index is now available. 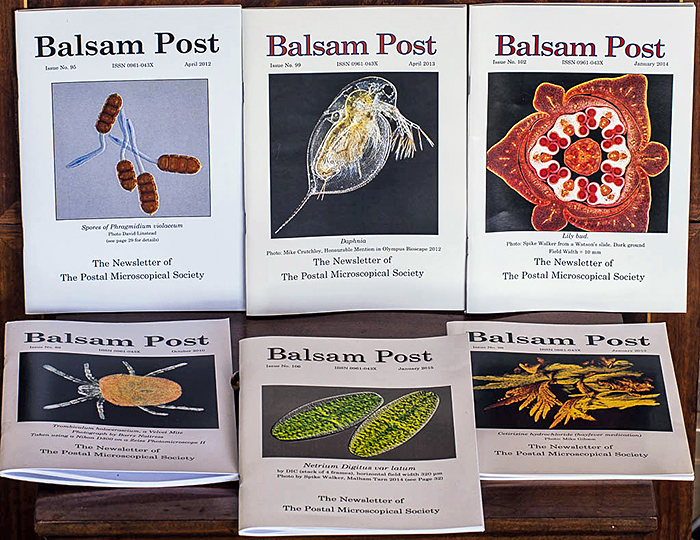 I hope that I have given you a flavour of what our members are interested in, and what belonging to the PMS means, and what we offer. If any of this is of interest, then do not hesitate to contact me.

Now, during the vast majority of this year, like most societies, we have been unable to meet up in person at either of our two meetings (May and October). However, circuit members have been getting their boxes of slides each month, as normal, and some within the circuits do keep in contact with each other. I would like to think that these boxes of slides to look at, and the often very enlightening notes that go with them, have provided much of interest through these past months. Indeed, as time is a commodity many have had more of recently, certainly indoors, they have perhaps looked in more detail at these. One of our past members, Douglas Richardson always gave the boxes his meticulous attention, whether they be boxes he put out onto circuit himself, or indeed those of others. He was a long-time contributor and apart from the many boxes of his slides that are still on circuit, he made wonderfully detailed notes on any of the slides that passed through his circuit. One characteristic of these notes were the drawings he made of the actual subjects, with full size details and often comprehensive labelling. This was a Godsend for the beginner to the microscope and microscopic subjects, and appreciated by many over the years. Doug had a fairly comprehensive library of books up in his loft and he usually gave lists of excellent references for the subjects, which were a great help to those wishing to find out more on a particular subject. 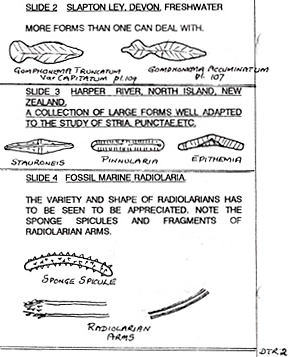 Example from the notebooks

During the height of the lock-down period, myself and Balsam Post Editor Jeremy Poole have been using some of our ‘indoor’ time to produce a single volume that will contain the ‘Mounting’ articles by Ernie Ives. Ernie was a member for many years, made many thousands of slides, ran microscopy weekend courses, acted as Editor of Balsam Post (twice) and was easily the largest contributor of articles over the last thirty years. Those in this ‘series’ started in BP Issue 27 (1995) and continued almost continuously until Issue 103 (2014), so it is quite a body of work. Indeed, it could rival Eric Marson’s ‘Practical Microscopy’ amalgamation of his NBS booklets in its usefulness for the slide maker. It is not a ‘facsimile’ of the originals, the text has been scanned and put through an OCR program to turn it into text that has been printed to the current standard we enjoy in our publication. The original illustrations have been used, and it comprises two spiral bound volumes, so will sit flat on a bench. We have had proof copies printed, and it looks very good. 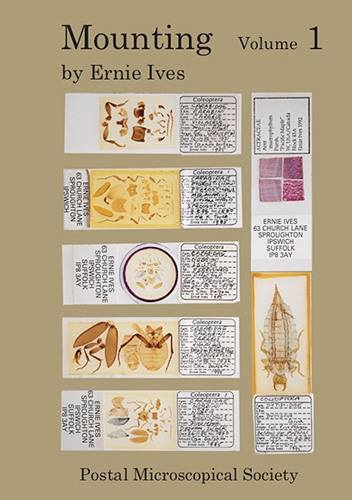 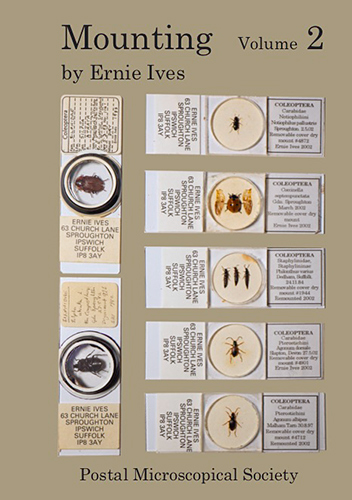 It will be available initially to PMS members, hopefully later this year. It will be at a very modest cost, though in present circumstances will have to incur postal charges if obtained before next Spring at the earliest (fingers crossed).

You can use this form to send a message to Mike Samworth: