Starting on the microscopy journey…

2020 Started quite nicely for us. In early January myself and my wife headed off to Tasmania for our holiday where we could ‘get away from it all’ down there, quite literally. When we arrived at Sydney airport we were in the middle of the intense bush fires that were raging, and the sky was thick with the smell of wood smoke. Even in Tasmania itself the smoke from the mainland could be smelled and seen, making visibility hazy for the first few days of the trip. While there we occasionally saw snippets on the news about this new ‘Coronavirus’ which had appeared in China and was starting to crop up elsewhere too. As we came back to the UK at the end of January, it was starting to become an issue in Europe too….

When lockdown started my own work slowed down (I do scientific research into the measurement and imaging of skin). The companies I was dealing with gradually went on furlough or simply just closed down, which left me wondering a bit about what to do to keep myself occupied. While the prospect of no work was not a good thing, it allowed me to catch up on some writing of articles and my own research, and it was at that point that my mind turned to microscopy.

I’m not a complete novice when it comes to a microscope, but I had little formal training. I had some experience with optical microscopy during my University days, and when I worked for a big FMCG company on skin research one of the techniques I helped develop for clinical testing of skin was in-vivo confocal Raman spectroscopy, where a confocal imaging system is used to generate chemical profiles through the stratum corneum of live subjects. But that was about it. I am however reasonably practical, and having both a research and hobby interest in photography, especially ultraviolet (UV) photography, I thought about getting a microscope in need of repair to get it going again and learn on. While visible light optical microscopy would be my initial goal, I eventually wanted to have something which would allow me to do UV transmission microscopy to help with my work.

Ignorance is bliss, and with plenty of ignorance I duly waded in to eBay to look for a microscope. I wanted something older (not all plastic and hard to work on) but not so old that getting spare parts would be impossible. In the end I found an Olympus BHB which had no objectives or eyepieces, the light didn’t work, and it was in a bit of a sorry state, Figure 1. 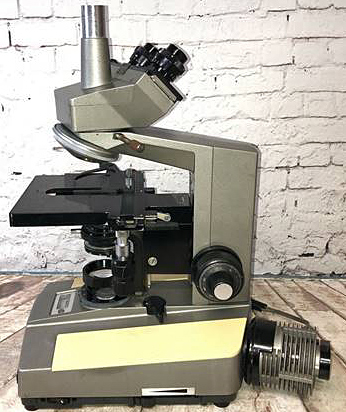 Figure 1. My starting point – an Olympus BHB in need of some TLC

What I did like was that it had a trinocular head, as I definitely wanted to be able to do imaging work. I liked the idea of a built-in light as well. The lack of lenses didn’t bother me, as I presumed I’d be building them up as I went along anyway. Also the price was ok, not great, but ok. When I got it, it turned out to be in a worse state than I’d hoped. The bulb was blown, and the electronics inside didn’t work. Anything which was lubricated had seized solid and needed to be stripped down, cleaned and re-greased. There was a lot of corrosion on the bare metal parts, and I get the feeling it had been stored somewhere damp for a while. But it was easy to work on. Allen keys and screwdrivers were all that was needed.

One of my first little builds was to adapt the light source to LED. As the internal electrics were fried, I just ran this off an external power supply, and it worked…just about. I didn’t position the LED at the same location as the old bulb filament so it wasn’t very effective. However a replacement working filament bulb and all was well again.

At this stage I had no objectives, so back on eBay and I bought a few which I hoped would be a good starting point. I started with an Olympus 10× UV FL, a couple of higher magnification Zeiss Neofluars, and I also got a 25 mm Zeiss Luminar. The Luminar was mainly for UV photography, and while I was getting the microscope up and running, I also played around with that. In Figure 2 is an image of a dandelion flower taken with it in UV, using a 200W Hamamatsu xenon lamp. 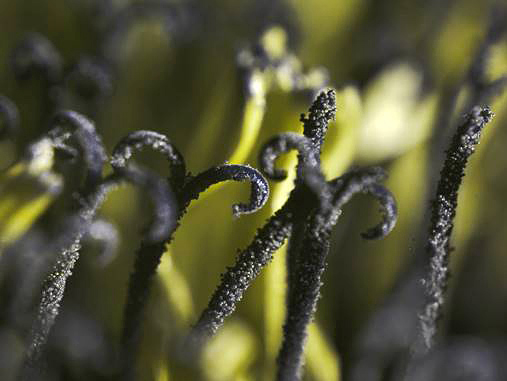 The lens was attached to a UV modified Nikon D810 using about 60 mm of extension tubes. For those not familiar with UV imaging, in some regards it is like normal photography. In Figure 2, the parts of the flower which absorb UV look darker. The dandelion which is yellow in visible light, strongly absorbs UV in the centre of the flower and looks dark. This was just a single image with no focus stacking, but it showed the Zeiss to be good and sharp. I also measured the lens transmission in the UV, and for a glass element lens it actually turned out to be really good, Figure 3. 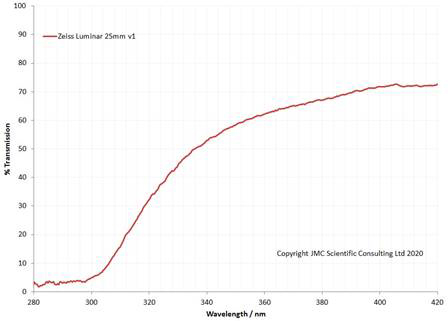 I enjoy the historical side to imaging (and science in general) as well as the technical side. In my UV photography I have a number of dedicated UV lenses which use special glasses – quartz and calcium fluoride lens elements – to enable transmission of the UV down to and below 250 nm. A bit of research led me to the Zeiss Ultrafluar objective lenses for microscopy, but also I came across reference to some Leitz UV objectives as well. Amazingly I managed to find one of these for sale in the US, and 6 weeks later I had it for testing. It was a 16× objective with a standard RMS thread and 160 mm tube length, and is shown in Figure 4.

When I measured the transmission of this one I did indeed find it had great UV transmission, Figure 5. 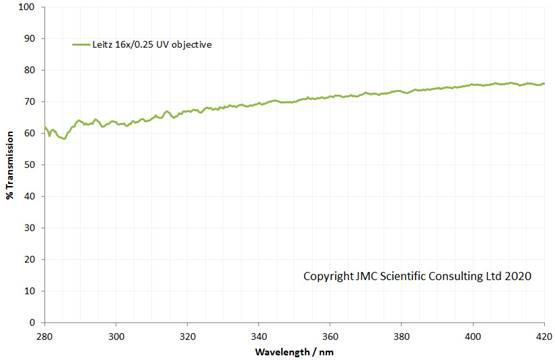 Unfortunately I cannot currently measure lens transmission below 280 nm, but the flatness of the transmission curve told me that this lens was either quartz, or quartz and calcium fluoride like the Zeiss Ultrafluar lenses, so would be good to below 250 nm.

I came across a Leitz catalogue from the mid 1980s and it listed 3 UV objectives, Figure 6. 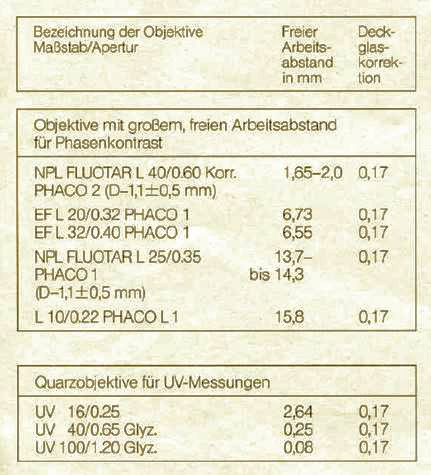 Amazingly at a dealer in Germany, I managed to find the 40× and 100× lenses as well (and also something else – a 300× lens which seems to be older, but that is a different story), Figure 7.

The observant amongst you will have noticed something a bit odd. The coverslip thickness for the UV objectives mentioned in the catalogue in Figure 6 was 0.17mm. However on the 16×, 40× and 100× objectives in Figure 4 and 7, you’ll notice that they are designed for 0.35 mm quartz coverslips. I have no explanation for this discrepancy; although I suspect it is an error in the catalogue (but I admit I have no proof of that). These other lenses also showed great UV transmission.

I’ve done some initial work with UV transmission microscopy, looking at a thin film of a sunscreen product, which is shown in Figure 8.

The image in Figure 8 is a single frame taken looking at a thin film of a sunscreen cream with the 16× Leitz UV lens. With UV transmission the sunscreen-containing oil droplets look black in the image as they are absorbing the UV. The continuous water phase runs between the oil droplets. This was done with the system being far from optically ideal for UV though, so is a very early stage image.

The UV microscope build is coming along slowly. Ideally I’d like to get another BHB or BHA which I replace the internal optics on, rather than risk damaging my working version. I’ve sourced some UV suitable photo eyepieces (made by Lomo) and even a Zeiss quartz condenser (which is currently in the US, waiting for its trip to the UK), and quartz slides and coverslips (horrendously expensive and I hope I don’t break them). Lighting wise, I have an array of xenon and mercury xenon lamps, but may try lighting LED for long wavelength UV work.

In addition to thinking about UV transmission work, I’ve been on the lookout for Olympus accessories. I have an epi-fluorescence setup, a reflected light setup (for a different project), and a phase contrast condenser and objectives, so I can explore phase contrast and dark-ground imaging as well. I’ve built a new white light LED light source which is nice and powerful and will be useful for polarised imaging. I’ve also got a copy of Zerene Stacker and am gradually getting to grips with that.

I’ve also found myself looking out for vintage slides, especially of human skin, to practise on. This one gave a nice image of sweat duct when imaged in phase contrast, Figure 9.

All in all it has been a bit of a roller-coaster 6 months. To keep myself occupied when lockdown began, I started my journey into the world of microscopy, and it has become a really fascinating one, taking me in directions I didn’t think it would. Researching the historical aspects of the equipment has led to towards items which have great potential for my UV imaging work, and for a fraction of the cost of what they would have been when new. I am starting to realise that the discipline of microscopy presents some significant challenges to the scientific researcher, but from what I have seen so far the rewards are definitely worth it, and I look forward to seeing what the future holds.