When Corona lockdown was declared in in March 2020 it completely disrupted the project to catalogue the QMC resources at the Natural History Museum in London. Up to that point four of us had been making weekly trips to the Museum to go through and record the contents of the three storage areas we use. The last, incomplete, listing was made in 1988 when things were somewhat different. The Club has disposed of some things, others have been added to the list and our access to the stores has changed significantly. The current round of cataloguing started sometime around the millennium. Over time the participants have changed and the team at the beginning of 2020 although small was, and is, enthusiastic. Paul Smith, Jacky McPherson (me), and Daniel Ferri worked under the guidance of Dennis Fullwood, the Collections Officer. Sometimes we were joined by Irma Irsara, and her help was much appreciated. Each of us has different and complementary skills, attributes and interests and together we formed an effective team. We have made significant progress which is very encouraging, and had in place a programme to continue in the same vein. All this is now on hold until we can gain physical access to the stores, and the future of that is still very much in the lap of the gods.

The Museum closed its doors on the 17th March, and even if had we been willing to go there we have not had any access to our stores since that date.

So what progress could be made working on our own and isolated during lockdown?

In my case I was fortunate to have at home two (sets of ) items belonging to the Club because I am working on an article about them for the Quekett Journal of Microscopy.

The first was a box of micromanipulators – one by S. H. Meakin, the other by D. Jamieson. I wanted to get to grips with the working of the micromanipulators and maybe even look at the efficacity of different bristles. So after trying unsuccessfully to use them during some of our weekly sessions it was agreed that I could take them home to work on.

In January I had made significant advances in understanding the Meakin micromanipulator which works very well but is temperamental. I felt I needed more information about its use.

The second item was the ‘Archival File L/1 Members Technical Correspondence’ containing letters between members from the period 1940 to 1952. Phil Greaves had provided the file but with the caveat that, whilst it was in my possession, I should scan the individual letters, give each of them an accession number (CXXXXX), enter details into a spreadsheet and transfer them to archival storage pockets.

So there were two possibly related tasks that I could do during the lockdown – to find out more information about the Meakin micromanipulator, and to scan the Archival File. This seemed to be a great opportunity so see if letters written by Samuel Henry Meakin would give me better insight into using his device.

I don’t know about other people but I found it very hard to concentrate on anything at the beginning of lockdown. In the previous week I had been to the Museum for the AGM, and then to the Reading Convention on the Saturday, both of which gave me lots of opportunity to meet lots of Quekett members and gossip, besides being tempted to buy nice things. I love the weekly trips to the Museum, London is an exciting place, always interesting. The folk I meet in ‘The Deli 12.30 as usual?’ are fun and the archives are full of fascinating things that I get to find out about. Now I was going nowhere and meeting no-one. The strange timelessness of the situation confused me.

This should have been an ideal opportunity to get on with those two tasks, but it wasn’t until a month in that I could even begin to think about any of it. The easiest task, once I had enough archival pockets, was to scan the letters – a methodical and routine procedure. I meant to not read them because I know from previous similar tasks that this would open far too many interesting threads and I would not finish the job in a reasonable time. However, when there are diagrams a curious mind will always want to know what they mean and be distracted, especially if they relate to the micromanipulator. I exercised a little discipline and decided that perhaps I should complete the scanning before getting on with the micromanipulator experiments, because that way I would have any relevant information easily accessible in the scans.

L/1/3 contains twenty-four letters to Dr (Mr) Odam, many from S. H. Meakin, some from A. R. McClure and one from H. Swatman. Along with these are various loose notes and lists.

At the start of the quarantine period I was part of a chain e-mail subgroup of members and later when Zoom got going joined in the virtual gossips, and so on. During these exchanges Stephen Parker alerted me to the fact that some of the letters had been published by Steve Gill on http://www.microscopy-uk.org.uk/diatomist/SHMletters.pdf . This document contains details about the people mentioned above. Steve was working from a typewritten transcription of fifty-eight letters (not all of the originals are in file L/1/3, neither is the transcript) but I have been working from images of the relevant letters in the file. In this item I want to concentrate on the letters in L1/2, i.e. the ones not already dealt with in Steve’s publication, mostly to F. C. Wise. Unlike Steve’s document I do not intend to transcribe the individual letters (or this display will be for Quekex 2022). I will pull out what I consider to be some of the more interesting elements. 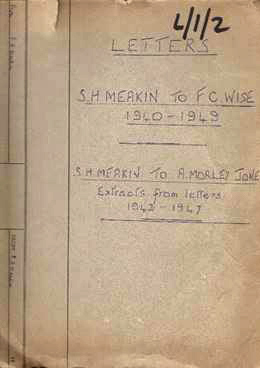 Figure 3 The cover of the file containing the letters in L/1/2
This foolscap file in many instances had prongs poked through the paper of each letter that were causing damage to the paper. It was also too big to fit onto my scanner in its entirety.

First consider the different topics covered in the letters. Meakin cleaned diatomite and sold the extracts and mounts of the diatoms obtained. Some of the sales were contracted ones to Watson, Bakers and Flatters. Others to interested individual parties, of which F. C. Wise was one. 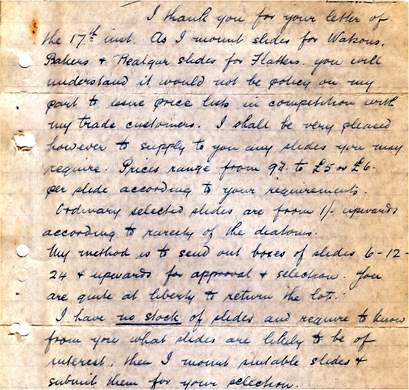 Figure 4 21st August 1940, part of a letter to F. C. Wise with the prices for purchase of slides directly from Meakin

The war in progress certainly affected how he managed his business; witness this extract from a letter of 19th January 1942.

He also would receive mounts for critique, and make identifications of the diatoms therein, often with helpful, or maybe just be constructively critical, comments on the techniques and quality of the slides.

He shared his methods and diagrams of equipment freely.

This second letter from 11th September 1940 is so indicative of how Meakin approached his work that I am including it in full. 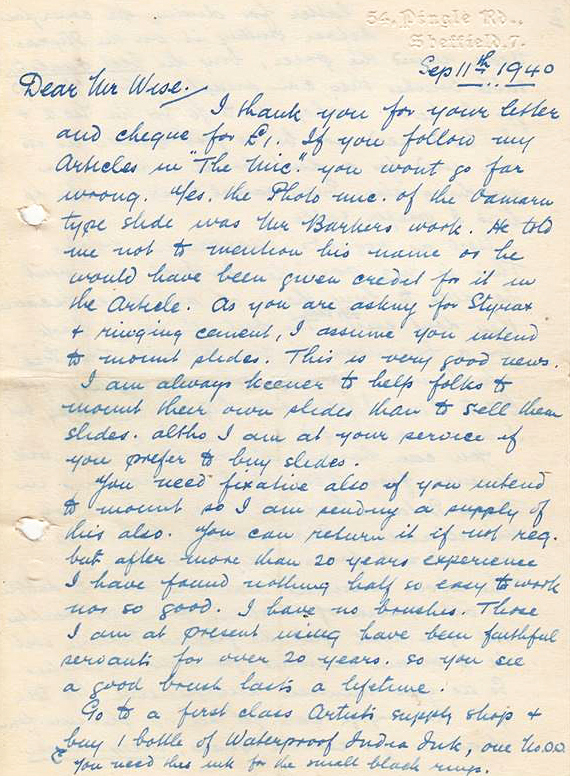 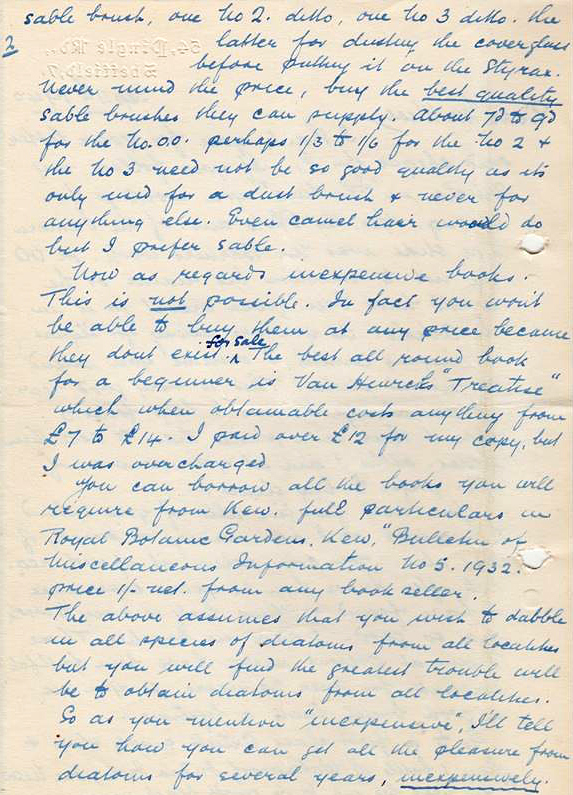 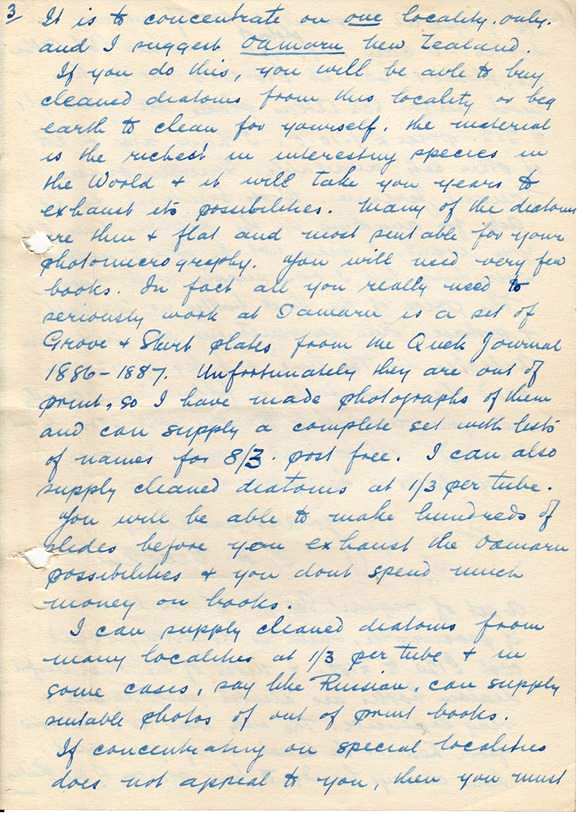 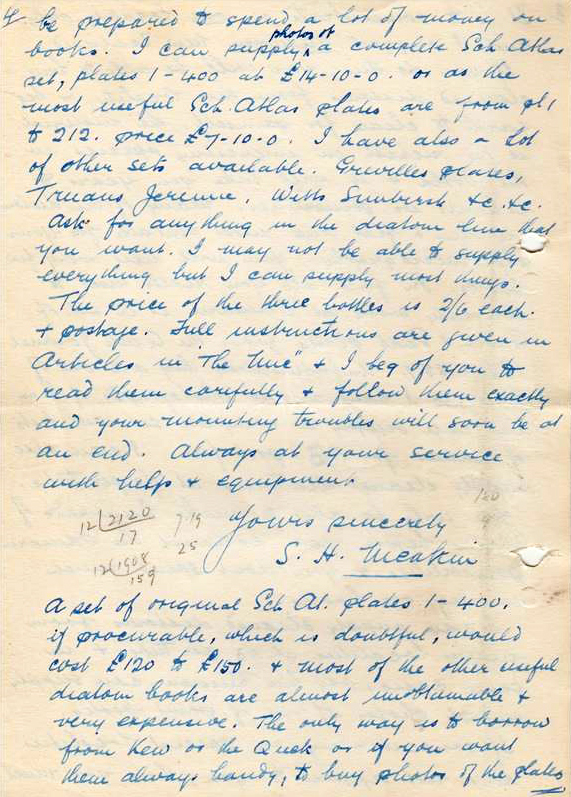 Meakin was also expert in photography and photomicrography and sold copies of images he had made of specific material and reference books. He would print copies of these to order as indicated in the letter. As he was very willing to supply items on a sale or return basis there were occasions when this led to dissent.

In 1948 when photographic media were in very short supply he sold some images to Dr Abdin of the British Museum. However, Mr Wise alerted Meakin to the fact that Dr Abdin was selling them on at a profit. 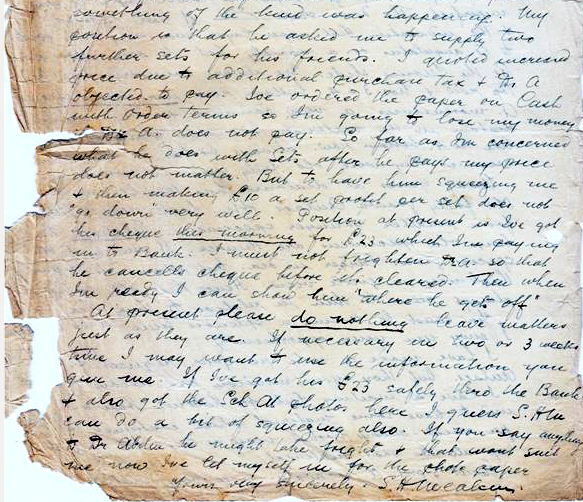 Figure 7 14th June 1948, response to information from F. C. Wise. This was an extremely fragile letter.

It transpired that Dr Abdin’s customers were some of his students. Meakin was enraged at the profit being made and after some detective work engaged with them and arranged to supply them directly at his, much lower, price. All the while he was concerned about payment for the paper he had bought up front. 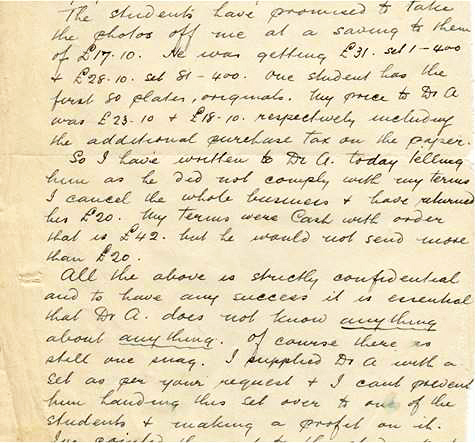 Figure 8 3rd July 1948, what Meakin intended to do with respect to the student purchases

The last mention of this problem is in a letter of 12th July 1948 where Meakin says the bank has cleared the cheque from Dr A and the students are keen to buy the photos from him, so he will recoup his outlay, he will not be out of pocket.

In the next letter the discussion turned to double and multiple frustules of diatoms, I think it was about Aulacodiscus sp. which he mentioned a lot.

Figure 9 11th August 1948, double frustules in diatoms – Meakin does not think so

With respect to diatom nomenclature he had very strong opinions and was glad to air them in the letters when appropriate. There are many examples of this in Steve’s publication.

Another letter talks about Aulac(odiscus), and different spore types (axiospores, microspores and resting spores) that could be associated with them. He quotes Swatman as believing that Debya could be one valve and Aul(acodiscus) undulatus the other of the first frustule of Aul. undulatus. He consulted Reinhold (possibly Dr Th. Reinhold of Haarlem) about that opinion, Rheinhold did not agree. The discussion continued. This is the final letter I shall look at and here it is in full, giving a very good idea of what S. H. M. was like. 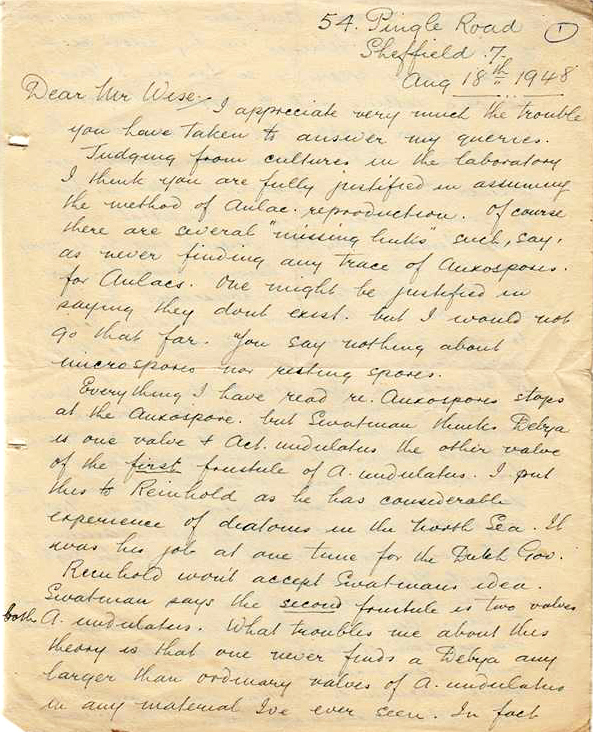 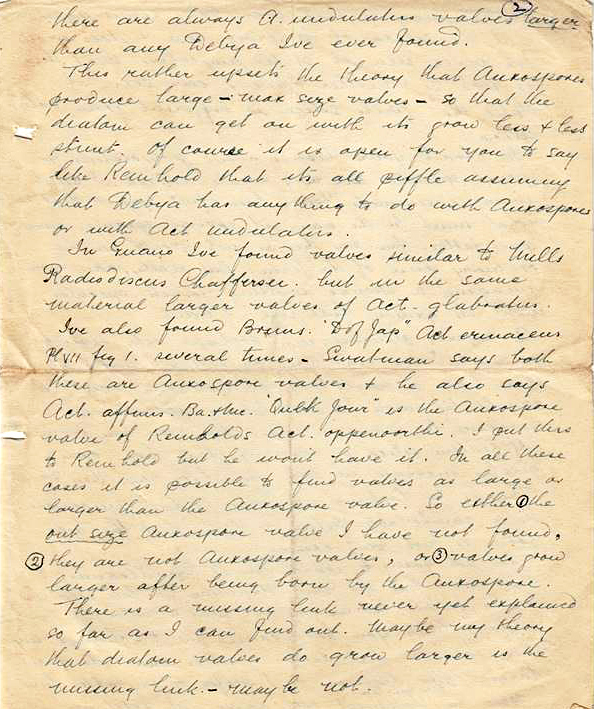 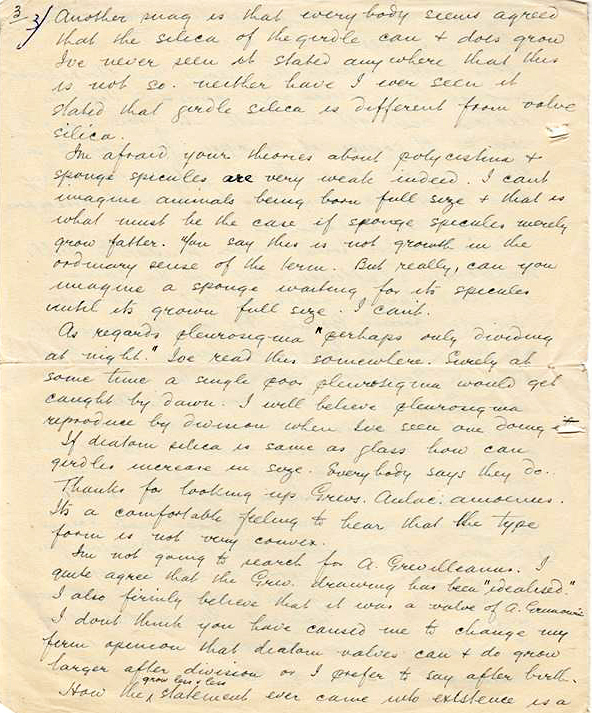 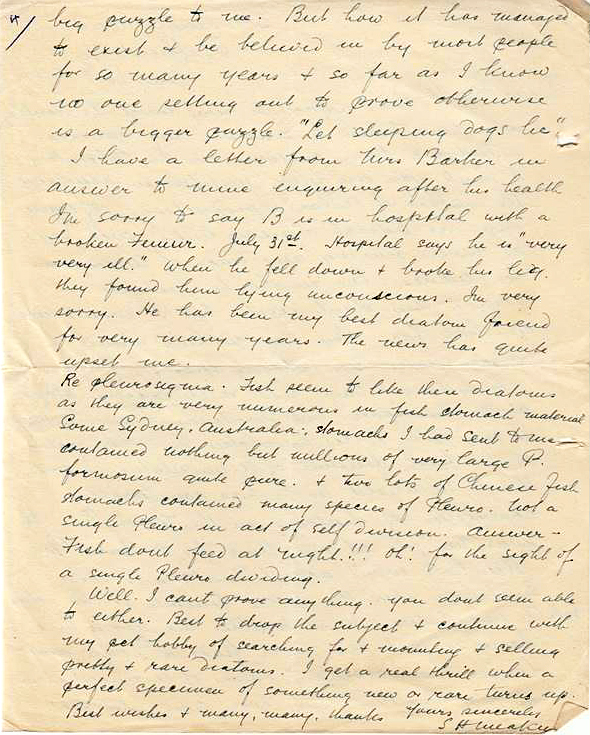 One thing that surprised me (although having grown up in the days before e-mail and easy phone calls it should not have done), is the frequency of the letters to Wise. In 1945 he sent twenty-five letters between February and December, and in 1948 nineteen letters between January and October. He even sent two letters on the same day more than once (14th and 16th June 1948) (and to Odam – who he consistently called Mr even though he was Dr Odam two letters on 12th October 1949). This frequency would not be notable now in the electronic age with e-mail but seems extravagant when you have to use a stamp and walk to the post-box.

I have barely touched the interesting material in these letters. There are many more discussions about diatom nomenclature and life cycles and methodology. The parts that I was searching for are those relating to the mechanics of the micromanipulator. When it is ready these will be addressed in a future article in the Journal.

Finally, I have to say that the news of the death of Dennis Fullwood that we received in May has devastated the team. He was inspiring, very knowledgeable and encouraging, giving us a great deal of freedom to tackle the task in hand as we thought fit, but guiding us to resources and opportunities. We shall miss him terribly and hope that whoever takes on the role of Collections Officer will allow us to continue the task we set out to do when circumstances permit.