Not “just” a microscope but a time machine…

As a new amateur microscopist I thought I’d share a few of my first faltering steps into the world of microscopy, what I’ve learnt and how it’s given me so much more than a mere “hobby” should.

It all started (or restarted) back in March whilst watching an episode of The Repair Shop. One of the experts was working on a decrepit set of binoculars. The result was, as ever, stunning and it got me thinking. If there are experts out there who can work such miracles, there must be someone who could resurrect my late father’s ancient brass and glass microscope?

My late father Peter Foden was a bit of a polymath. He was an artist, chemist, and general brains of the family. He’d trained as a research chemist and had spent much of his career working in the agricultural chemicals division of May & Baker (later Rhône-Poulenc) at their research station just outside Chipping Ongar in Essex. For some reason I’ve never quite fathomed, in the late 1970s he retrained and took over the role of Head of Human Resources, a role he continued in until he retired in 1988. My father was a huge influence on me. He taught me to question everything and accept nothing at face value, though his teaching methods were sometimes unorthodox. One of my clearest early childhood memories is when he decided it was high time I should be able to recite my three times table. My father took me on a walk into the woods near where we lived and he lifted me high up into the fork of tree where he left me until I could recite my three times table. Mathematics has never been my strong point which hasn’t exactly helped me in taking up microscopy.

In the mid-1940s when my father must have been in his teens he bought a second-hand microscope, I’m guessing at the same time he acquired a quantity of Victorian prepared slides. He later prepared many of his own slides which are dated 1948 and 1949. I played with these as a boy and eventually inherited them from my father.

The microscope which started a journey

My father’s Henry Crouch microscope had been in a sorry state for all the time I had known it. The coarse focus descended of its own accord, the mirror gimbal was in two pieces and secured to the mount with string and the mirror mount fell off the underside of the stage if you looked at it in the wrong way. I did some Googling and happened upon www.brassandglass.co.uk and sent a message with some images of my very broken microscope. I thought I may not get a reply or if I did the cost of repair would be way beyond my means. I very quickly got into a conversation with the wonderful fellow Quekett member Penny Thoyts who seemed very excited at the prospect of restoring the microscope. From the before and after images, I think you’ll agree Penny has done a phenomenal job. Not only has she restored it to full working order including a new mirror gimbal and mount, but she has made new stage clips and an aperture wheel both of which were missing. The brasswork looks fabulous and the stand and stage no longer look like they have been through a cement mixer. Best of all, the coarse focus no longer descends at speed, threatening to take your fingers off in the process. For those who are interested, the microscope was retailed by Pickard & Curry of Great Portland Street, London, who were general opticians. I am guessing it dates from mid-late 19th Century and it seems likely it was originally a monocular instrument and was later adapted for binocular use. 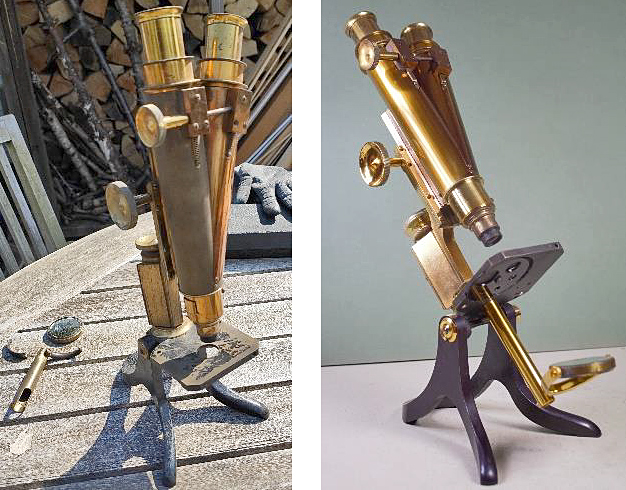 Henry Crouch microscope, before (left) and after (right) Penny’s attentions

What to do next?

Whilst my father’s microscope was away being looked after by Penny, I started to think about how it would be interesting to be able to use a microscope again. I had all my father’s slides to look at and, as lockdown took hold, I had time on my hands. I did a fair bit of research through Facebook groups and on-line forums and concluded that a Watson Service would be a good first purchase. I’ve always been interested in the history and the development of technology so had no interest in buying a modern microscope. It also seemed that Watson Service microscopes are high quality and relatively easy to come by. So started what has become something of an obsession. My Watson Service arrived mid-April and after some more research I set about learning how to use the instrument. I posted questions on the Watson Microscope Users Group  on Facebook and was delighted by the replies and offers of help. Lisa Ashby posted numerous catalogues and user manuals which proved invaluable and Merv Hobden recommended “Practical Microscopy” by Martin & Johnson as a good introduction to microscopy. My 1950 second edition has been my go-to text when I frequently lose the will to go on.

The journey so far

Fast forward five months and I have learnt so much. I would be first to admit I probably expected to be able to simply point my Watson Service at the nearest desk lamp, pop a slide on the stage and twiddle the focus a bit to get fabulous results. How wrong could I be. Just reading “Practical Microscopy” proved how much I had to learn. The initially bewildering world of spherical and chromatic aberrations, the importance of achromatic condensers, the relationship between numerical aperture and magnification, critical illumination and the holy grail of Köhler illumination, apochromatic and Parachromatic objectives, tube length and correcting for cover-slip thickness to name just a few. As an aside, it seems to me there are at least four different terms for the same thing in the world of microscopy. There have been many times when my brain has been fit to burst and without the help of fellow Quekett members, especially Merv Hobden, I may well have given up.

There have been many “firsts” in the last five months. The first time I managed to get lamp, condenser, specimen and objective correctly centred and aligned and more to the point understood how I’d achieved it. The first time I resolved Pleurosigma angulatum with a Watson ×90 NA 1.37 oil-immersion apochromatic objective and more importantly understood what that sentence means! 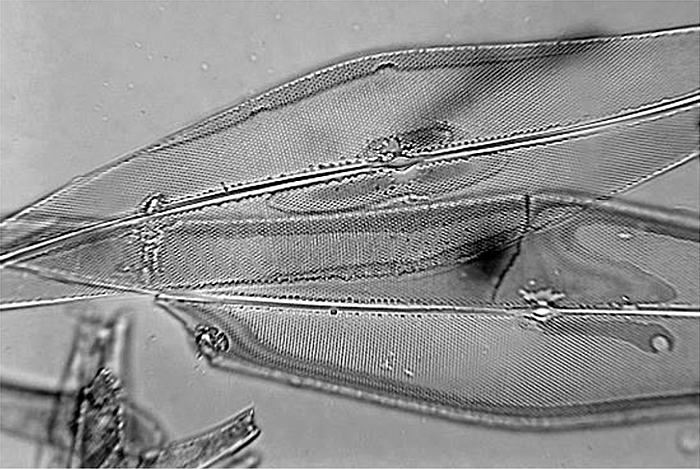 My first attempt at incident illumination with cheap USB LED lights from Ikea. 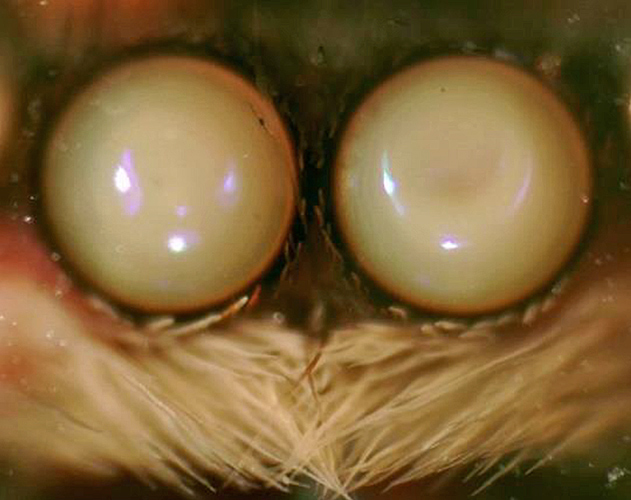 Probably most memorable amongst my “firsts” was when I achieved the seemingly impossible Köhler illumination. After days of trying I was convinced there was no way I would ever manage to lose the image of the lamp filament from the field of view. When I finally got there and the clear flat disk of light emerged, I declared to anyone who might be listening “I’ve achieved Köhler illumination”. Strangely my partner was less than bowled over…

What next & advice to new microscopists

My current obsession is dark-ground illumination using an ancient Watson Holos immersion paraboloid condenser. It is really tricky but the results are stunning when it works.

There is so much more to learn – there is always something new to try and I’m enjoying every moment, even when it goes wrong. I can’t quite decide if it’s the instrument, the development of the technology over time, or what I actually see with the microscope I enjoy most. I guess it doesn’t really matter, it’s all part of the journey. 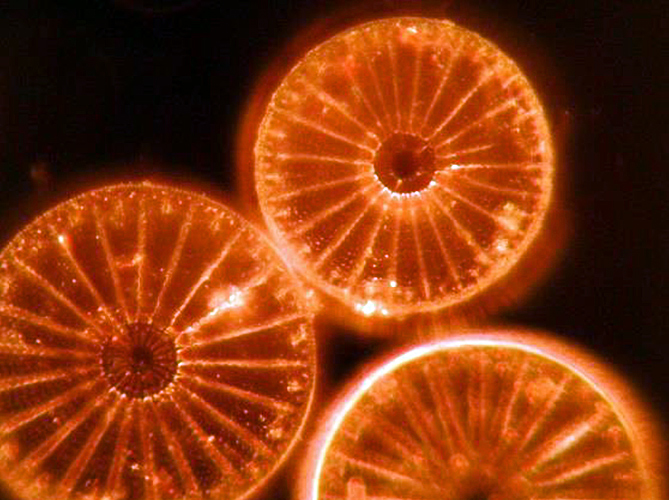 What would I say to anyone who is starting out on their microscopy journey? A few simple pieces of advice from one newbie to another:

Taking up microscopy has been a joy. It’s introduced me to kind and fascinating people who are willing to share their knowledge and reconnected me with my late father in a way I didn’t realise it would. I know he’d be thrilled with my having taken up where he left off and would be encouraging me to keep learning and keep asking questions. I’m a bit big for putting into the fork of a tree but he certainly wouldn’t be giving me the answers, he’d be encouraging me to find them for myself.