Microscope of the sky

I would imagine that at some point in most microscopists’ lives they like me have discovered the fascination of all types of optics, resulting in the comparison of microscopes and telescopes. After all, they both set out to allow us by magnification to look inward, and outward. As a young man growing up in the forties and fifties at a time of post-war rationing, everything from food to general building supplies was strictly controlled and expensive. I often dreamed of owning a telescope, but on my weekly wage of £2/10/0 there was no likelihood of purchasing one. Although a keen microscopic idea always in the back of my mind was to explore the heavens.

My opportunity came in 1986 at the age of forty when I had some limited disposable income. With this I teamed up with a friend who owned a potter’s wheel. Having acquired suitable glass blanks, I decided the simplest type to build would be a Dobsonian Reflecting Telescope which uses mirrors as opposed to convex and concave lenses. Great, I was now on my way to complete the childhood dream. I ordered a mirror grinding kit that came complete with a mirror grinding tool, lots of different grades of grinding grits and powders (carborundum) and pitch. Whilst not too difficult to achieve the configuration and depth of the concave, it was extremely time consuming working on the Pyrex blank. Luckily the 25 mm diagonal blank needed no preparation

Work, family, finances all new priorities came into play. However, over several months working at the potter’s wheel I completed the careful grinding of the 10 in diameter 11 in focal length concave mirror, and the 25 mm flat. 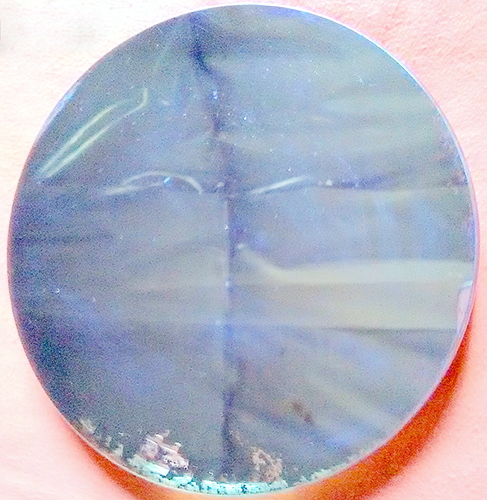 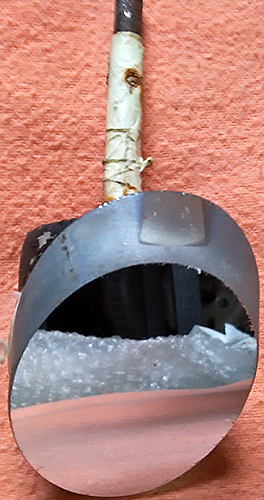 That completed, I sent the mirrors off for silvering, and on their return placed them in a packing box and that is where they remained for the next 34 years. Having moved to Scotland some 25 years ago and still working in my mid seventies leaving the dream of making my telescope lost in the work ethic to continue earning a living in the tourism industry.

Now informed of the site where I worked had to close, and having got over the initial shock, it was time to look for a positive outcome. Bingo: my unmade telescope of some 50 years now seemed to be a possible achievable venture. Where to start?

The simplest and cheapest type of telescope to build would be what became known as the people’s telescope named after the American inventor John Dobson. The telescope design now called a Dobsonian. 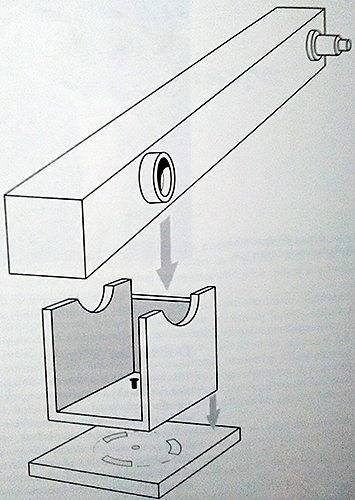 Due to the lockdown the only materials available to me were whatever I had laying around the garden, shed, and home that could be recycled. The first thing to do was to draw a life-size plan. This would require a large and long sheet of paper, coming to the rescue was an unused roll of wallpaper. Simply by drawing a 10 in vertical line at one edge, then taking the centre point and extending a horizontal line out 4 ft (or 1022 mm) approx. Finally connecting the top and bottom of the 10 in (or 250 mm) vertical line out towards the end of the horizontal line would give you the path of the image and determine where the eyepiece would need to be positioned. 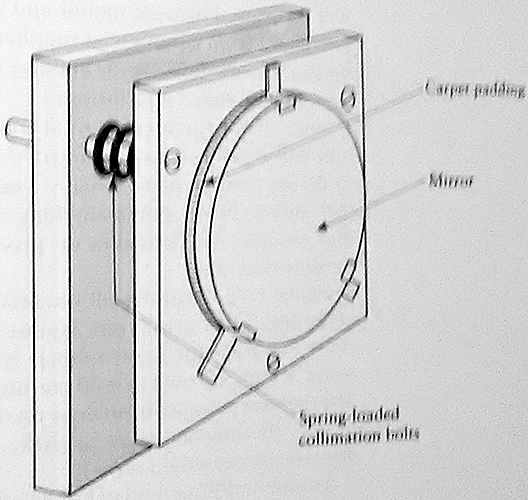 I decided I would mount the telescope on wheels so I could move it around the garden to find a sheltered spot each time the wind changed direction. The only problem being I had no wheels or axle. I then had a blue flash moment remembering our first Honda lawn mower now rusting in a corner of a field waiting for an opportunity to be taken to the recycling centre. Having removed the engine and cutter blades, cleaned up all I needed to do was to find a suitable sturdy piece of timber to attach it to the mower. Lurking in the shed were off cuts from a replacement kitchen work top, they were sturdy, heavy, and better still had a shiny hardened heat resistant surface – perfect. After about an hour’s work I had drilled and fitted a ½ in bolt through the centre, this would be the pivot point as well as holding the saddle box in position. I then secured the base to the lawn mower. 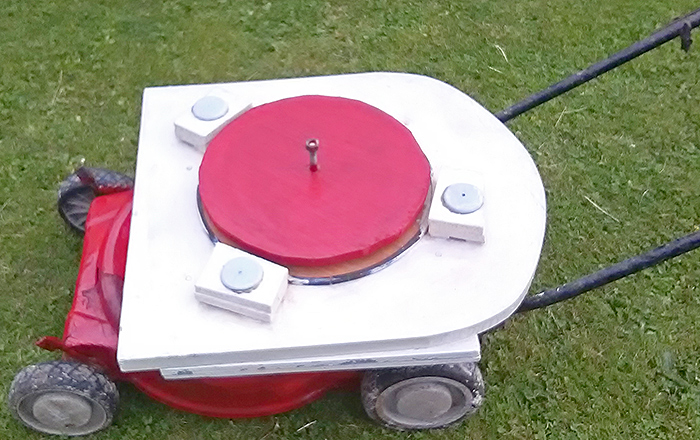 This box fits on top of the lawn mower platform enabling the telescope to turn 360° of altazimuth. It will also support the saddle rocker that will allow the scope to move vertically. 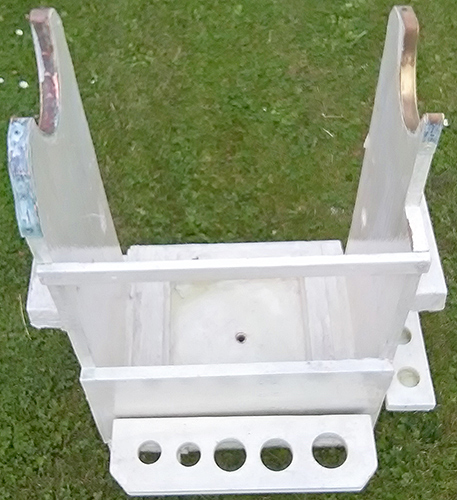 Once again I turned to the kitchen worktop to cut a piece that would serve as the base, fitted shiny surface down to permit smooth movement. I also found three old Teflon pads originally used to put under heavy furniture to permit easier movement. I fitted these on the base as the bottom of the rocker box was not quite large enough to cover the whole base. The sides were made from the doors of kitchen cupboards, with the tops cut out in the shape of the pinions that would be on the telescope body. In order for the saddle rocker to move smoothly, I cut two short lengths of discarded copper pipe, flattened them with a hammer, polished them up and fitted them in the two curved cut outs that would receive the telescope pinions.

My challenge here was to make or find suitable materials or items that could support the telescope tube whilst allow it to be moved smoothly to achieve a full 90° of altitude. Heading out to take exercise on a long cliff and beach walk, binoculars in hand, I was tracking a flock of low-flying swans who flew over a patch of long grass in the corner of a farmer’s field which appeared to contain some kind of discarded machinery. A closer look revealed several old and rusty bits of farm machinery, and a pair of front and rear axles of a car. Blimey, two front disc brakes were staring at me. A quick visit to the farmer and with his blessing and a little help, home I went at a pace. After several hours working on them with hand and a drill driven wire brush they came up trumps. These were steel, and would slide perfectly on the copper strips. The rocker saddle would also need to have a basic winding mechanism to control the elevation angle of the scope. These I turned again from 5 mm copper piping fitted through two other larger pipes. A couple of right-angle bends completed the handle. All that was required was to drill a hole through the centre of the winding handle to fit the winding cord in place, the other end being secured at the front of the telescope tube and the front of the rocker box base. The remainder was put together with whatever scraps of wood were available. 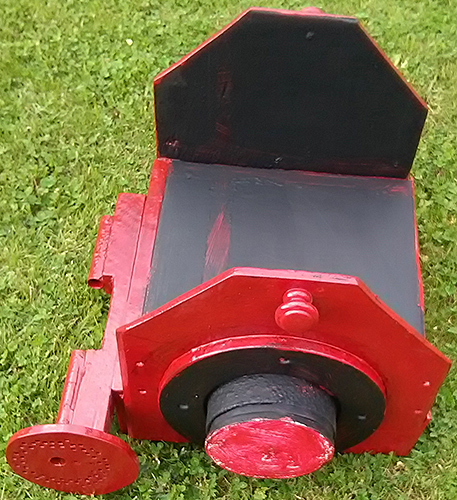 The simplest method would be to fit four pieces of 4 ft by 12 in lengths together forming a square tube. Alas, nothing like that was available. What I did find in the corner of a greenhouse was six pieces of 6 ft by 2 in square poles. These I used to make the skeleton, then some pieces of old packing boxes would provide the solid parts required to hold it together, and also provide a platform for mounting the eyepiece tube mount, together with the spotting scope or viewfinder.and finally the post to support the 25 mm diagonal flat to divert the image out from the centre of the tube to the eye piece.

The viewfinder started as an old air rifle telescopic sight, but I ended up using a broken half of a pair of binoculars giving me a wider field of view. The final touch was to add some setting circles which would allow the telescope to be set up on a given bearing through 6400 mills and another set which would give a rough guide vertically to the Equatorial Equator. 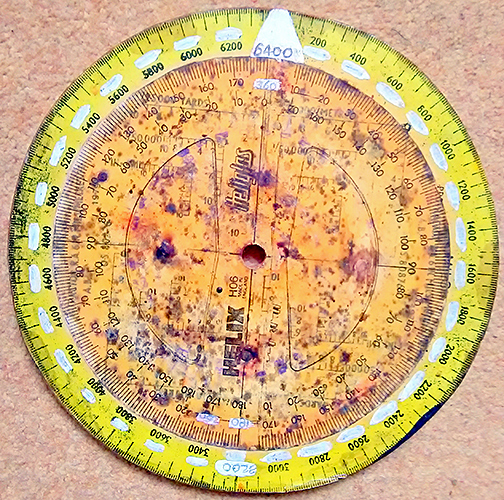 To balance the telescope I used three divers’ weights that are placed on the rear top of the assembly and secured. 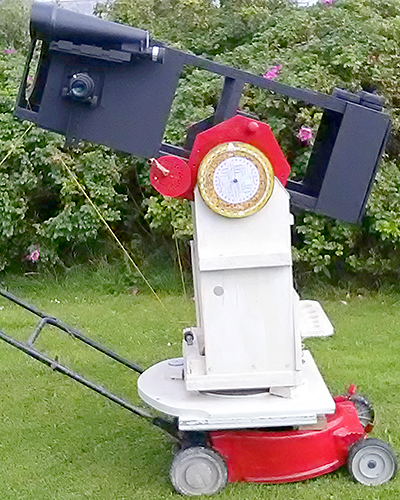 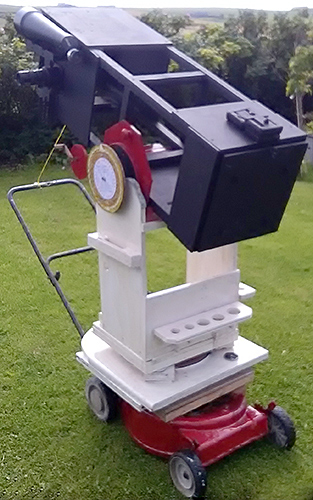 Now for the test and proof of the pudding. To do this I took a photo from the front of the house, looking at an island with a lighthouse on it, about a mile or so distant, then focused on the same object with the telescope taking a photo with my mobile phone. As the Dobsonian is designed primarily for viewing it is not designed for photography. The final photographs were taken 7 days after returning to work, as a project, it gave me a focus, and built up my resilience during this extremely challenging and worrying time. After I set up the scope, roughly collimated (lined up) the mirrors, the view of the lighthouse surpassed my expectation. Next project, hopefully will not be required? 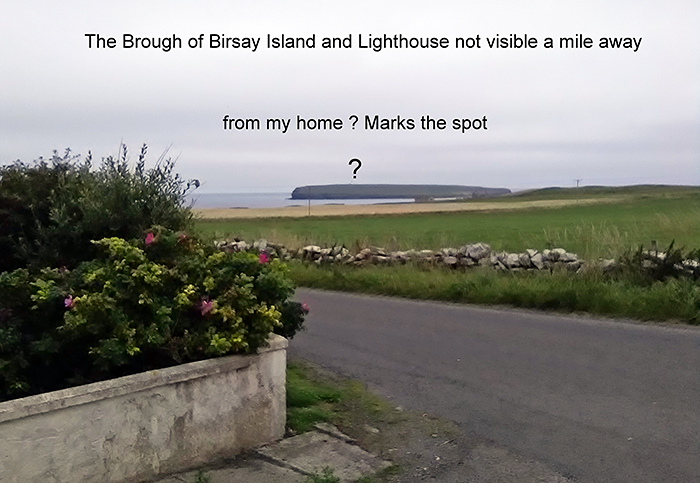 Birsay Island in the distance 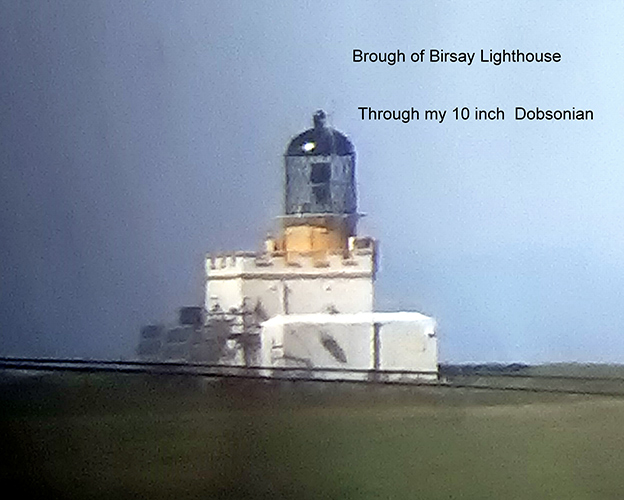