The 153rd Annual General Meeting of the Quekett Microscopical Club was held in the PA 135 Meeting Room of the Natural History Museum in South Kensington.

The outgoing President, Joan Bingley, opened the meeting and then handed over to the Hon. Secretary, Lisa Ashby, who presented highlights of the Annual Report for 2019, including increased membership, significant progress on digitising our collections, and our outreach activities.

See the slides from Lisa’s presentation

Stephen Parker (Hon. Treasurer) presented the accounts for 2019, which showed that we had achieved our aim of using all of our donated income for charitable purposes, including a donation to assist with digitisation of the Fritsch Collection of illustrations of freshwater, brackish and terrestrial algae

Joan had completed her 3-year term as President, and passed the badge of office to the new President, Steve Gill. 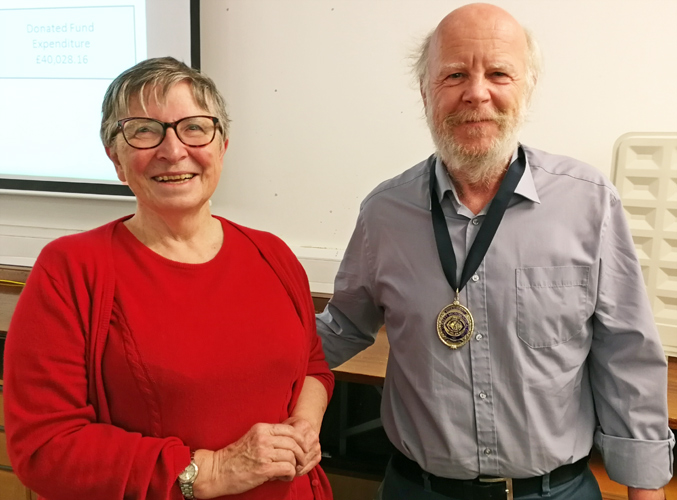 Following the official handover from Joan, Steve Gill took some time to talk about his view on the Club. He has been encouraged by the work that has been carried out under Joan’s presidency to change the perception of the QMC as a London-only Club, he believes that there has been a change in perception and hopes that this will continue.  This shift was echoed by Chris Thomas, who wanted to thank the membership for their Bulletin contributions. Many of the next issues’ articles have been sent in by people who haven’t previously contributed and some of whom are overseas. Which just goes to show it doesn’t matter where you are, you can still get involved.

On a similar note, Nigel Williams asked that we take a moment to acknowledge the good work that is being done on the Bulletin. He felt that it is being pitched at a great level and really appears to be going from strength to strength.

Pam Hamer was interested that our membership was up 23 on year end numbers and wondered if any of us had met our new members, having recently met a couple herself?  We need to do some work and see where these new members are based, but if you have joined recently, take a look at the website and see if there is an event near you, and if there is take a pit stop at the QMC stand and introduce yourself. If you are overseas and that is not an option, perhaps make yourself known on one of the social media platforms, such as our Facebook Group.

Steve also talked about his hope for the future to encourage smaller, more collaborative charitable grants. Perhaps groups of members taking part in surveys or research and then feeding their results back via the Journal, Bulletin or lectures.  Do you know someone that might benefit from this?  If so, let the Hon. Sec. know and she can talk you through the (very easy) process and put it to the committee on your behalf.

Finally Steve asked “Is there anything that the Club could be doing for its members that it isn’t?” and that’s where you, our members, come in. The QMC relies on its membership and you have the ability to help shape the Club. If there is something you feel we could be doing but are not, get in touch using social media, e-mail, letter or in person; we would like to hear from you.

As a result of the election, the members of the committee who will serve until the AGM in 2021 are:

The following office holders are not ex-officio members of the Committee:

One new Honorary Member had been elected during the last 12 months, Dennis Fullwood.

Eric Hollowday, known to many Quekett members for his expertise in rotifers, sadly passed away on 24th December 2019; he was 92 years of age. As a tribute, the video of his presentation at the Club’s 150th anniversary meeting was shown: