Nearly everyone who has any microscope slides has some sections in their collection, so we were hoping for some interesting exhibits at this meeting in room PA135 in the Natural History Museum and we were not disappointed. After a brief introduction, everyone who had brought slides described their exhibits, and then we had a chance to examine them all using some of the Club’s microscopes. 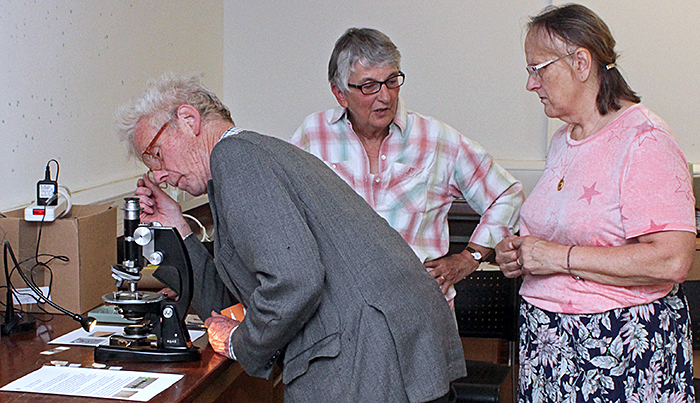 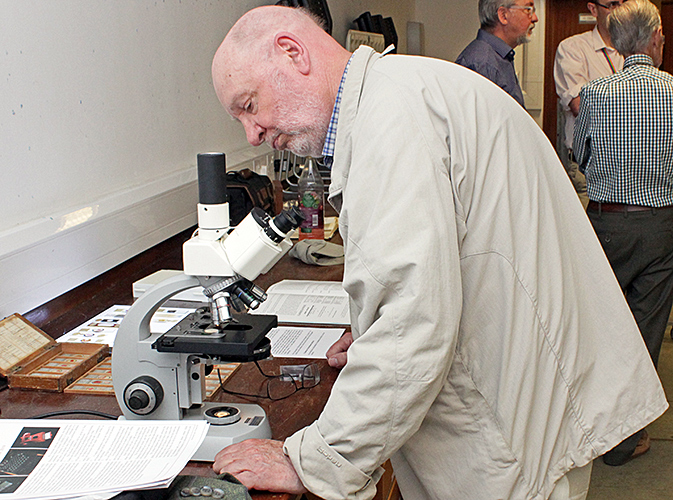 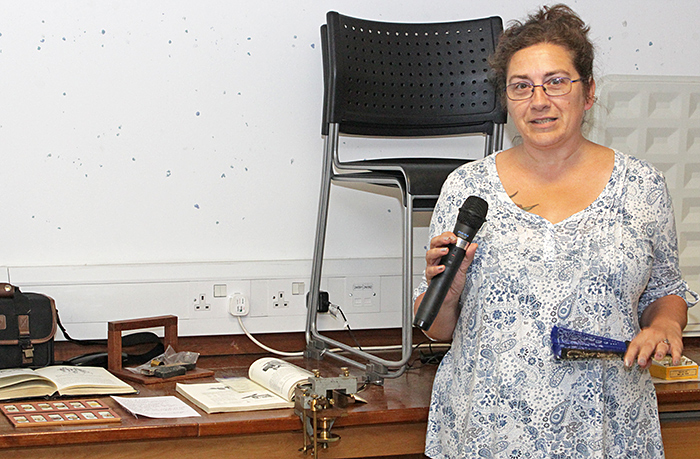 Lisa has problems with her neighbour’s cat, and is hoping to build up a collection of slides of every part of a cat, including ones sold by Watson. She also brought some Watson sections of plants.

Some of Lisa Ashby’s Watson slides 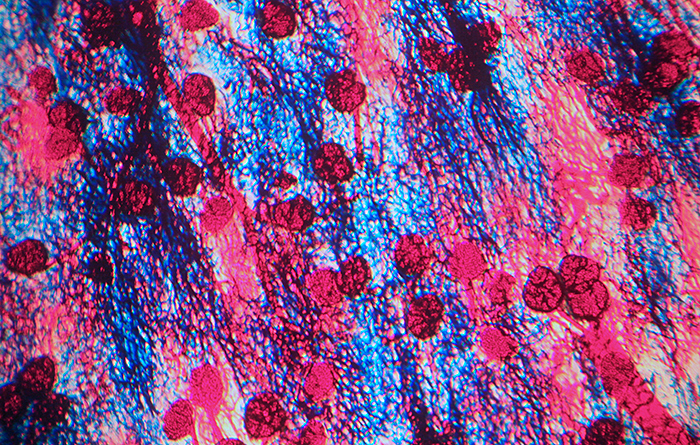 Nigel is actively collecting Watson equipment, and brought along a microtome that was used to make thin sections with a cut-throat razor. Nigel also showed a Watson catalogue with details and a drawing of the microtome. 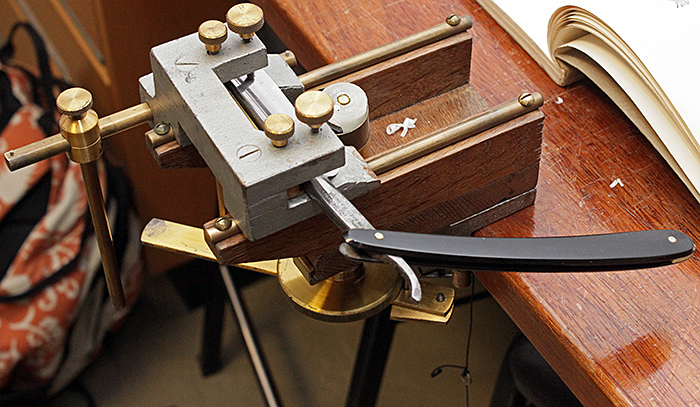 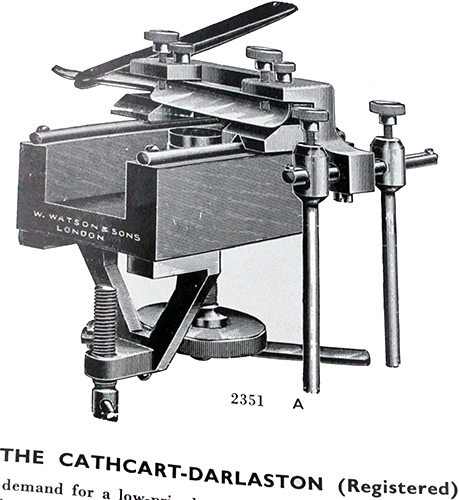 Joan Bingley brought a box full of botanical sections by past and present Quekett members, including Alan Cruse, Colin Kirk and John Wells, which we could admire under one of the Club’s stereomicroscopes. The specimens included conceptacles of seaweed, leaf galls from oak and pear, larch flowers and pine cones. 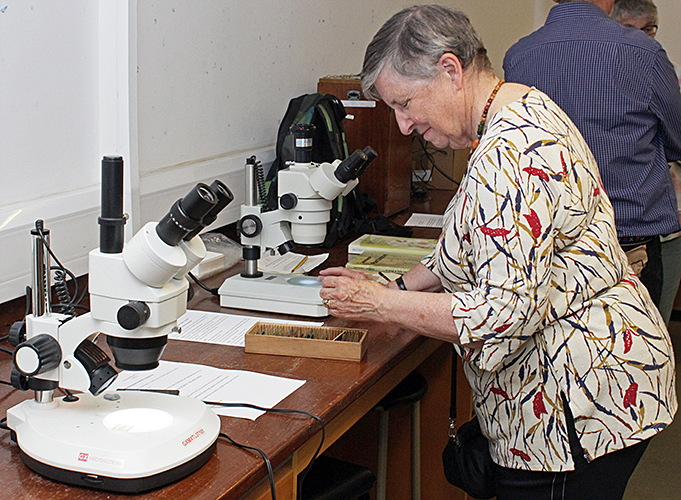 Daisy Cadet has been a work experience student in the Natural History Museum with Alex Ball, working on SEM-photogrammetry, and also spent some time in the Sackler Laboratory looking at her slides and at tardigrades. Daisy brought along a box of old slides that had belonged to her grandfather, who had been a Quekett member, and they attracted a lot of interest from the Club’s slide collectors. Her grandmother had been a member too. Daisy has an Instagram account @dizzy_microscopy. 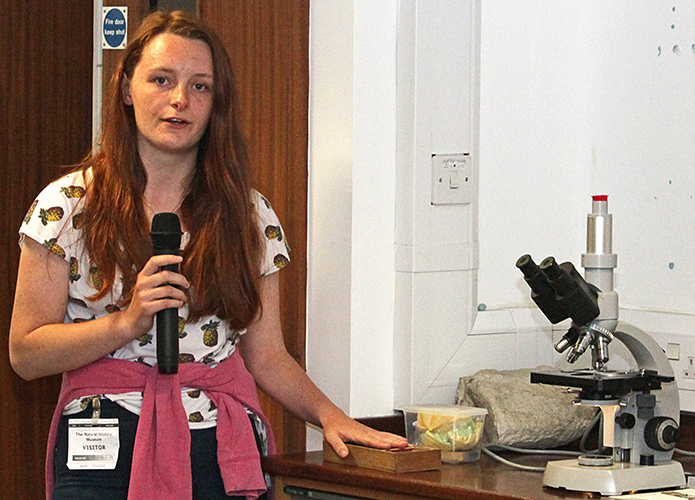 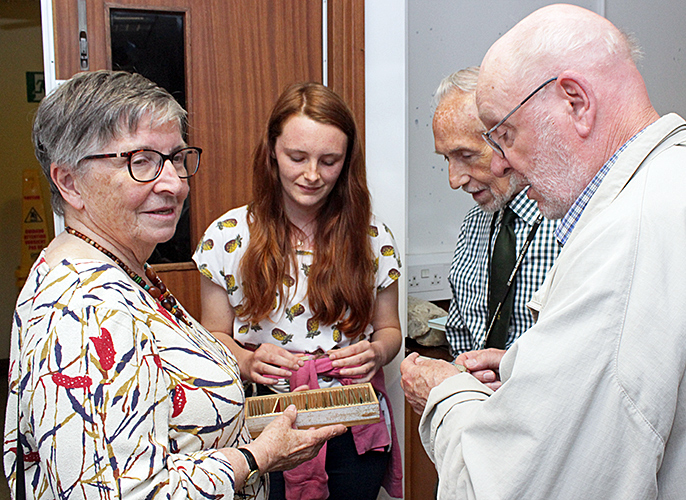 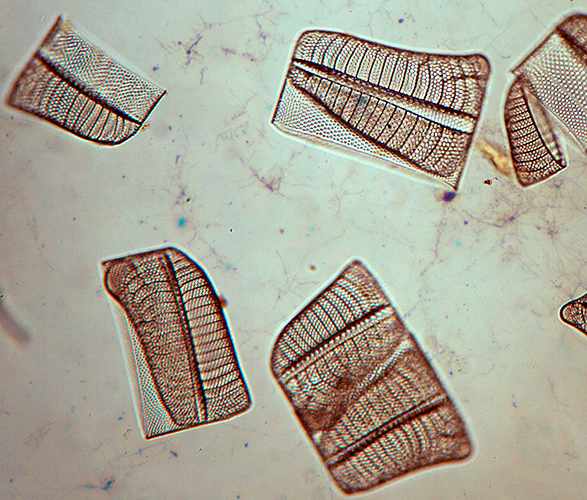 One of Daisy’s old slides

Dennis Fullwood showed a wooden box “Pathological Preparations from the Human Subject” of slides by Arthur C. Cole with a printed label listing the contents. Slides by A. C. Cole are not unusual, but none of us had seen a boxed set before. 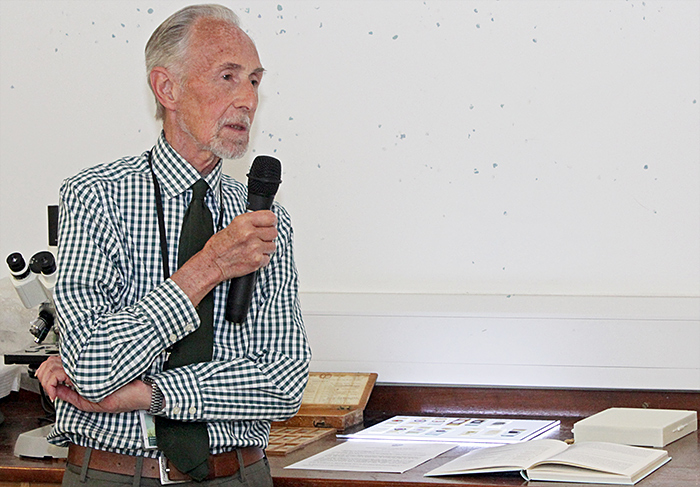 Dennis also brought a selection of other sections from his collection, with a thin LED light ox to display them. 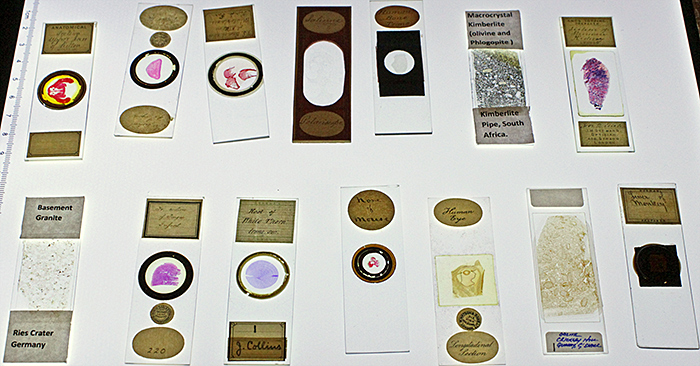 Some more of Dennis Fullwood’s slides of sections

Pam Hamer is interested in rocks and minerals, but many of them need specialised equipment to make thin sections because they are so hard. However, she has managed to produce sections of relatively soft materials such as limestone and a soft black stone from Robin Hood’s Bay. Pam used small diamond files intended for sharpening knives, with glass glue as a mountant, and although her sections are not very thin they do reveal details such as fossil remains and oolyths. 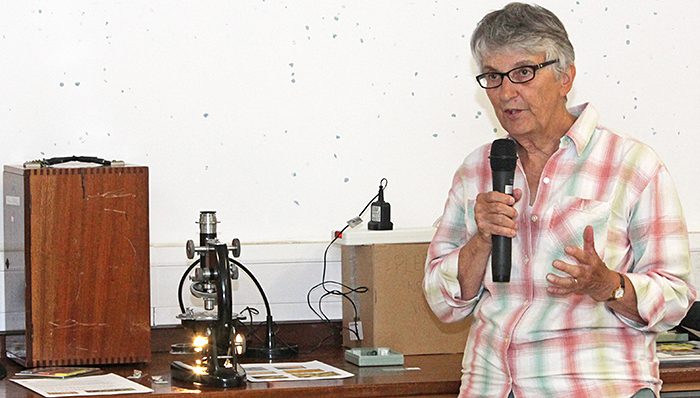 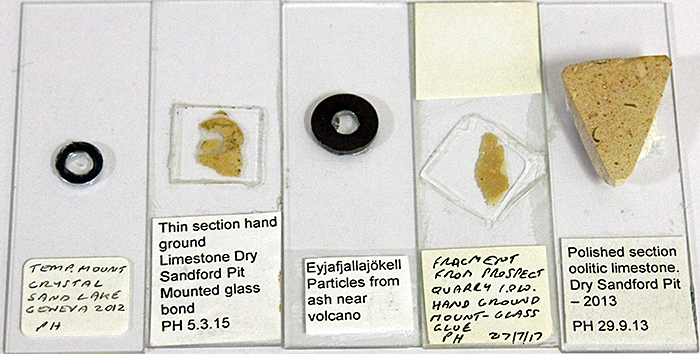 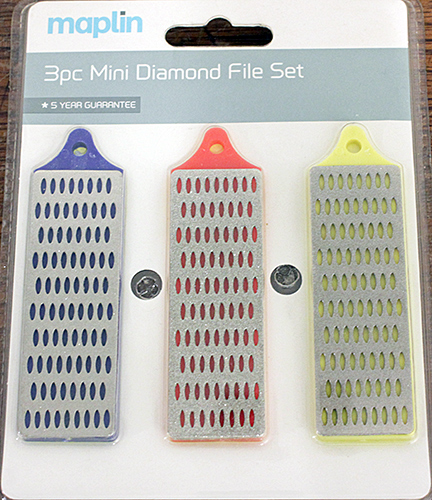 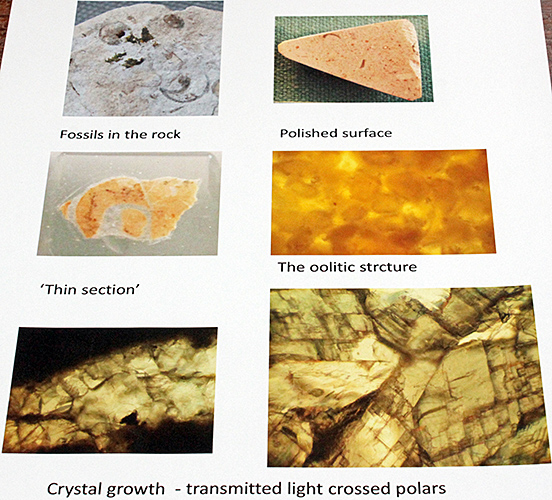 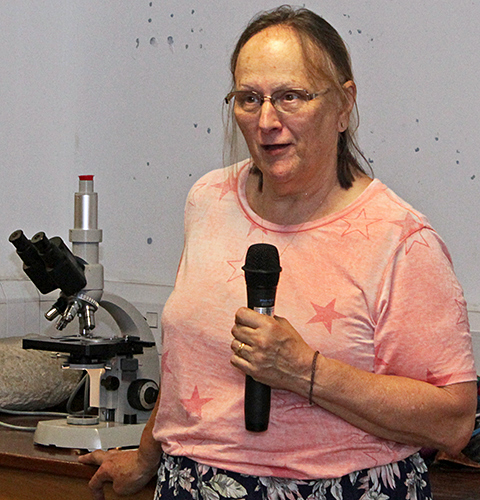 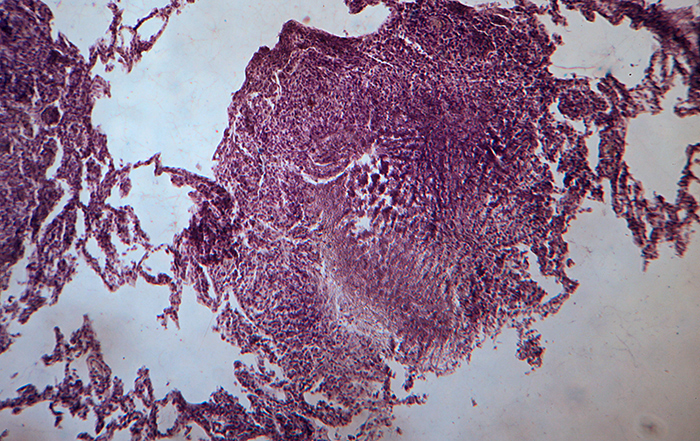 Jacky also brought a slide of mouse ileum that we cannot tell you about because the work has not been published yet.

Stephen Parker only brought one slide, but it was a spectacular longitudinal section of an entire young mouse. The slide was made by Lieder in Germany, sold by Microslides of Oxford, and came from Brian Bracegirdle’s estate. The specimen was much too big for a compound microscope so Stephen provided one of the Club’s stereomicroscopes for viewing it.

Alan Wood brought a dozen slides of sections of animal, vegetable and mineral specimens, including a slug by Mike Smith, Magnolia wood by Ernie Ives, grape hyacinth flower head by Colin Kirk,  snail tentacle by T. Gerrard & Co., and staurolite schist that could be by C. H. Caffyn. Alan provided a Trecker portable microscope with a fixed magnification of ×35 for viewing them. 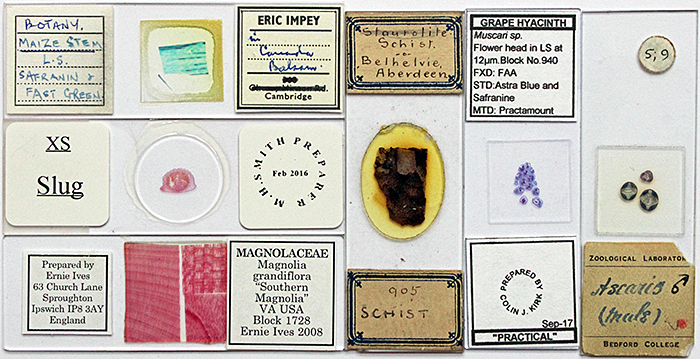 Alan has been working on a way to take photomicrographs at meetings, and tried out a Canon EOS 5D Mark II with an Olympus OM Zuiko 50 mm f/1.8 standard lens and a Leitz Periplan 519750 eyepiece, an afocal arrangement that produces some vignetting. 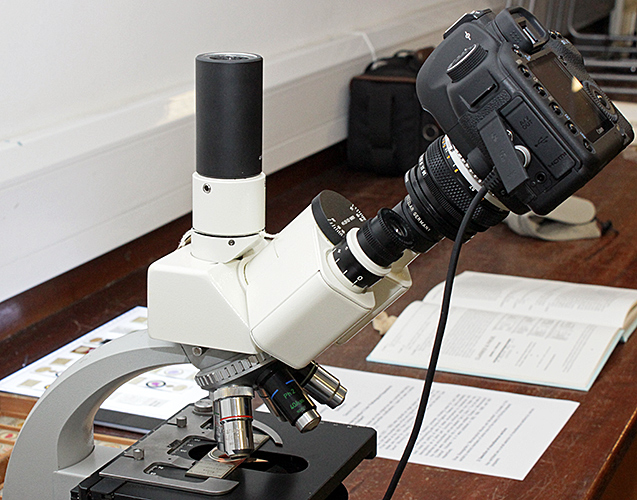