The 2019 Annual General Meeting of the Postal Microscopical Society was held as usual in the main hall and committee room of Turville Memorial Hall in Husbands Bosworth, Leicestershire, about 6 miles from Junction 20 of the M1. Lots of PMS members also belong to the Quekett, so there were many familiar faces from Quekett meetings. 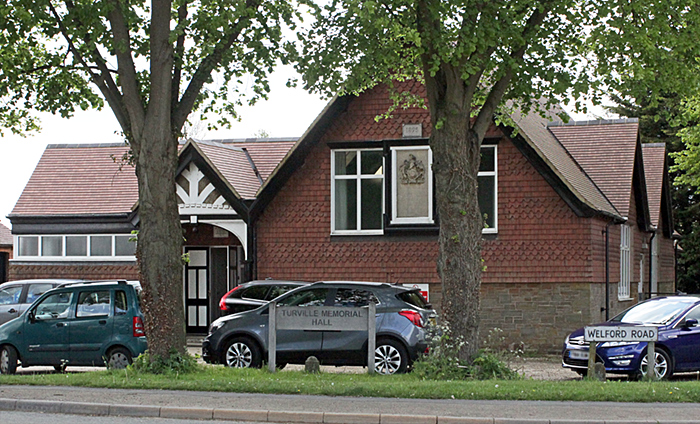 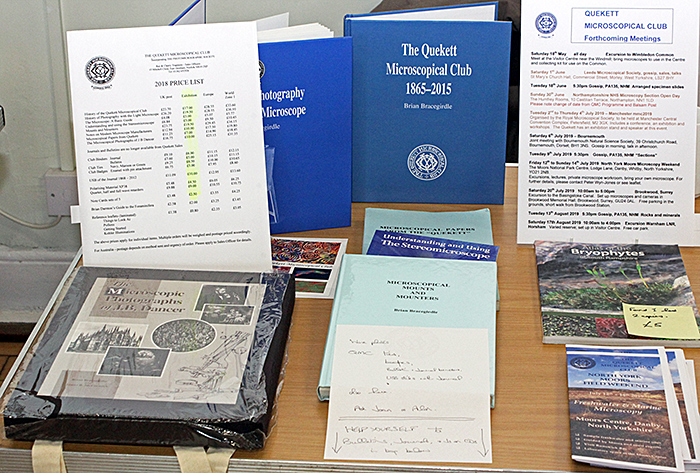 John Fletcher showed a black and brass microscope by J. Swift & Son with a box full of accessories, set up for viewing slides under polarised light. Illumination was provided by an Olympus PM-LSD lamp that he had converted to use an LED.  His slides included several wood sections by Ernie Ives. John was also selling a black and brass Leitz microscope with its wooden case. 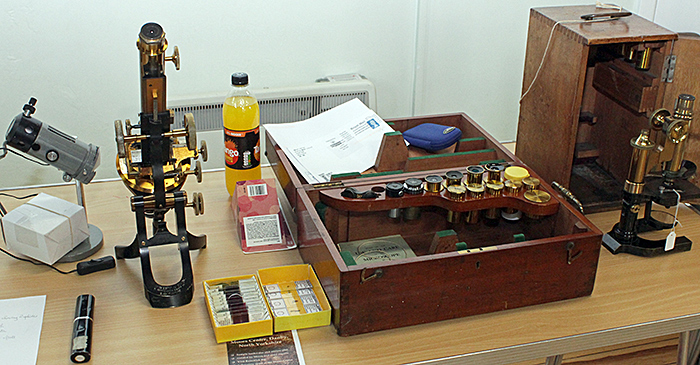 Mike Gibson was selling a Russian Lomo МБС-9 stereomicroscope with transmitted light base and an Optika fibre optic unit with a ringlight, a Meopta AZ-2 portable microscope with its domed case, and a couple of books. 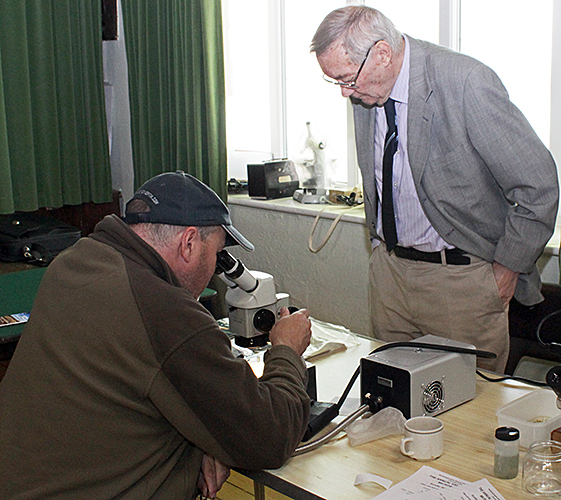 Mike Gibson (standing) with a visitor 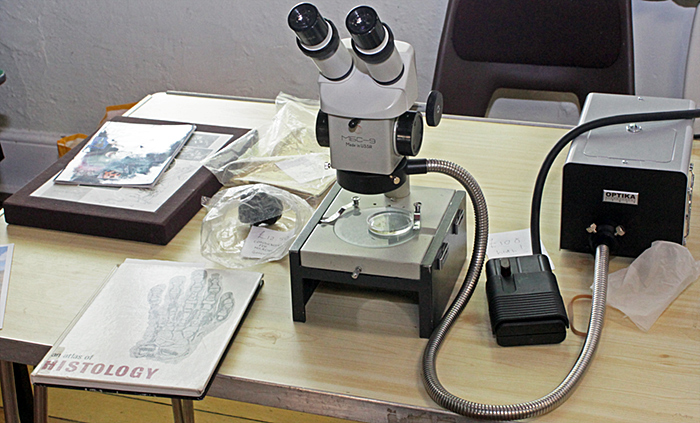 Steve was also selling a Bowens Illumitran slide copier and a few microscopes (some from Steve Edgar’s estate) including a Leitz inverted microscope and a Beck simple microscope. 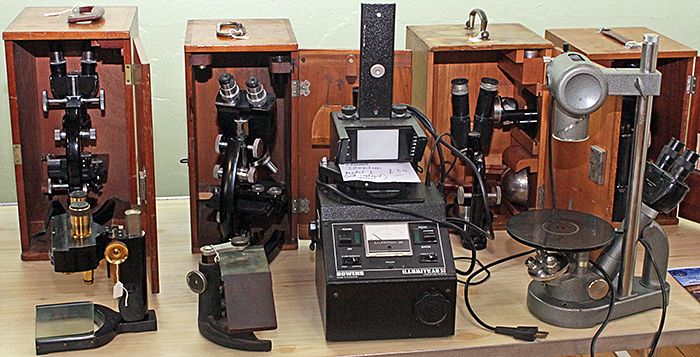 Lawrence Hartley was selling a Baker long-arm stereomicroscope, a Cambridge rocking microtome, lots of books, some video cameras and some other items. 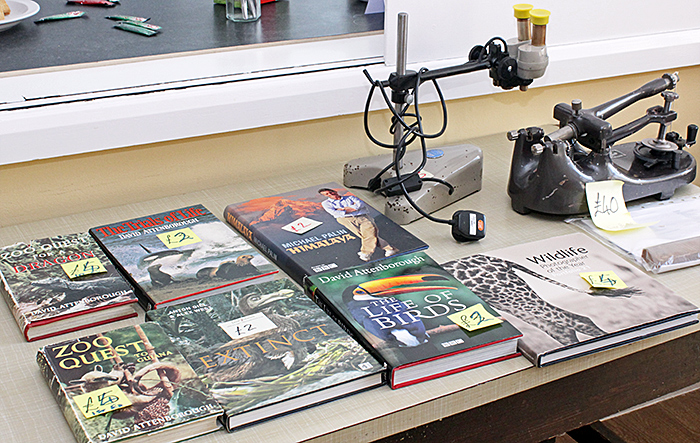 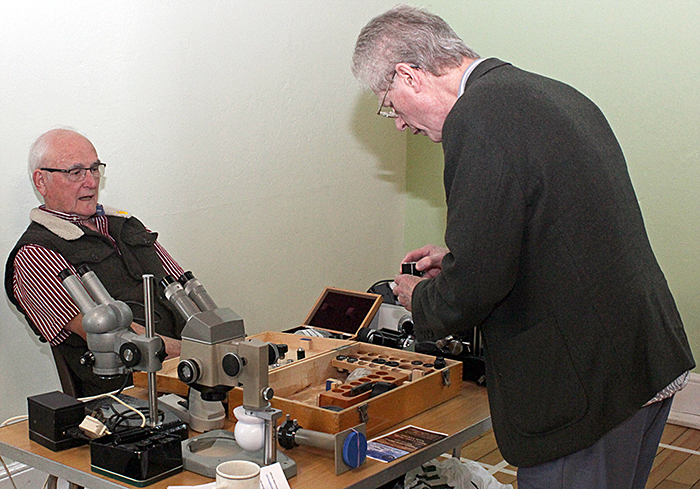 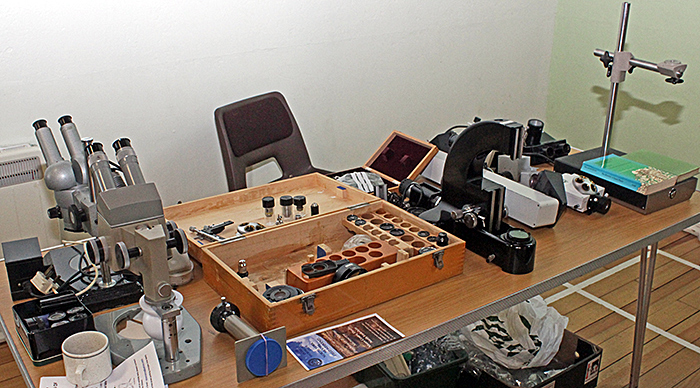 Chris Kennedy used a Leitz Z6 apochromatic stereomicroscope with its head replaced by a video camera (JVC, with ½ inch sensor) feeding an image to a monitor to show some fossils, including a wasp and a brittlestar. Illumination was provided by a Leitz fibre optic unit.. 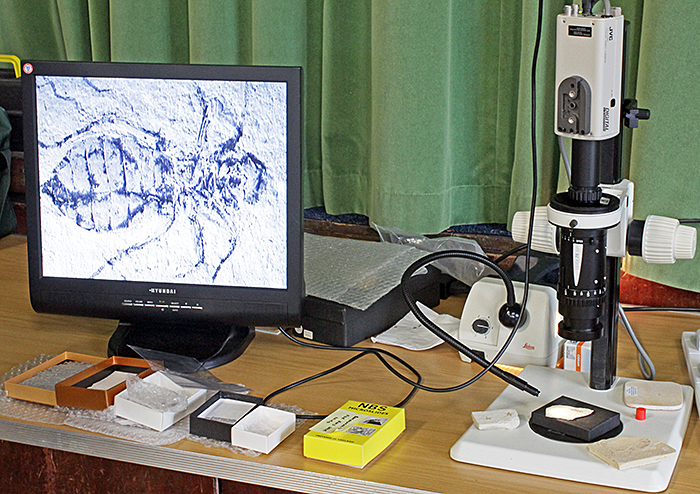 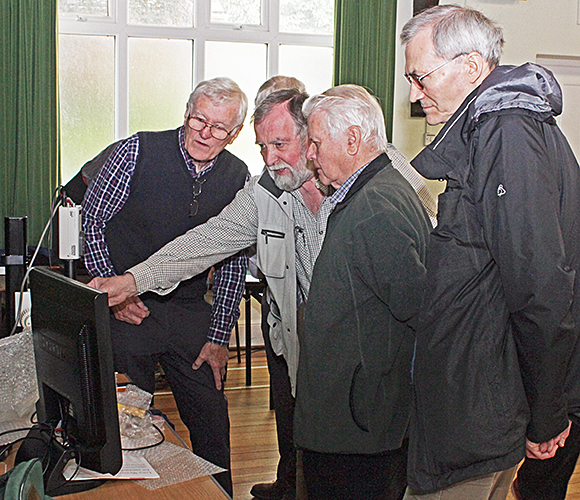 Colin Kirk was selling slides that he had made of botanical specimens, for £2 each. He also showed a slide that he had made of a flea from a grey squirrel, hoping that someone would be able to identify it. The flea pygidium used to be used to test objectives, and Colin had a photograph of a Watson slide.  Colin also showed an old paperback book, Fleas, Flukes and Cuckoos: A Study of Bird Parasites by Miriam Rothschild & Theresa Clay 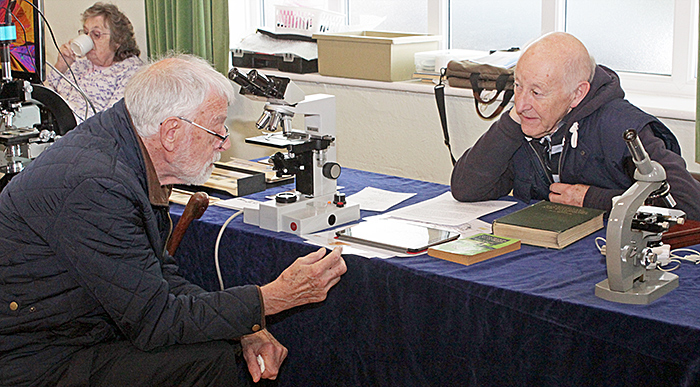 Colin Lamb had some microscopes and accessories for sale, including a Baker Patholette with its red domed case, an Open University Meiji PTM-1A/05 polarising microscope, a Lomo dark-ground condenser and a Lomo drawing attachment. Colin was also selling lots of slides that he had made, some transverse hair sections mounted in Canada balsam, and some dry mounts of forams using a brass curtain ring as a spacer, for £2 each. He also showed some slides with coin capsules glued to them to hold dry specimens. For examining the slides, Colin provided a Meopta stereomicroscope that is unusual because the stand and the head can be tilted, so that specimens can be viewed at an angle and not just straight down. Colin has a big, heavy Vickers M41 Photoplan for sale. 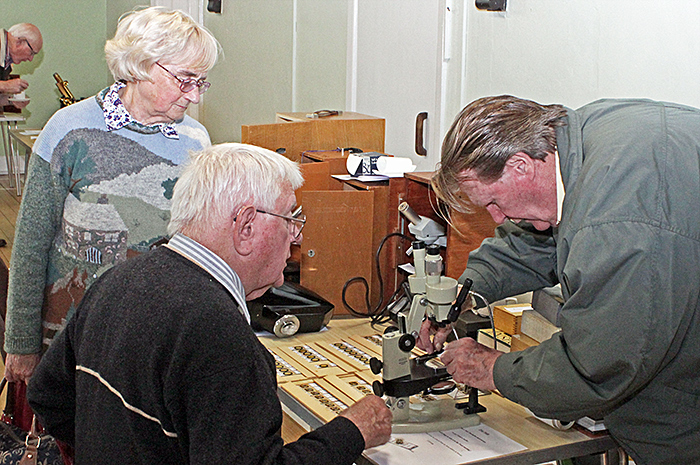 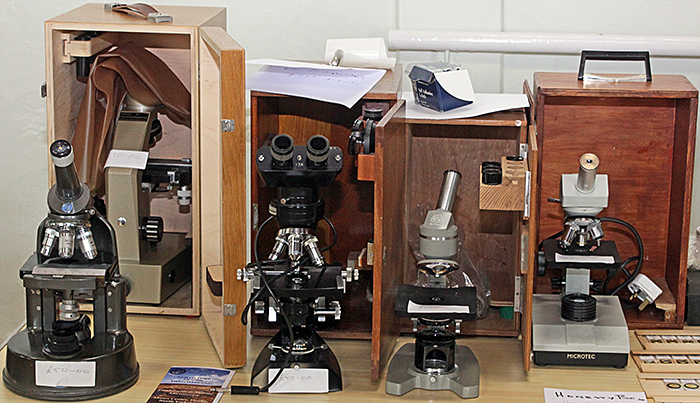 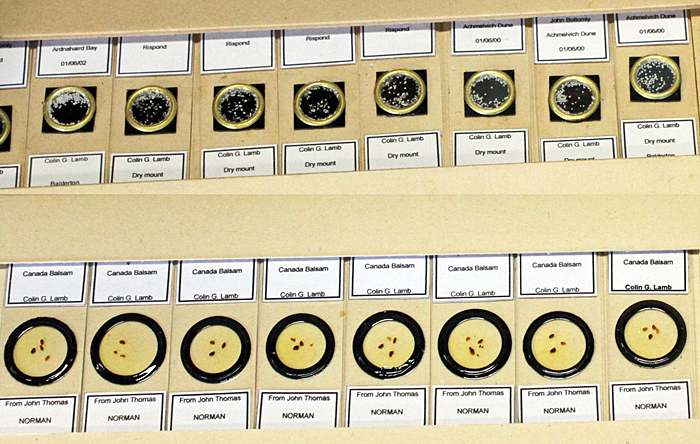 Geoff Mould brought his trinocular Reichert Zetopan and used it to show slides of crystals under crossed polarisers, with a Chinese inspection camera attached to a Samsung monitor. 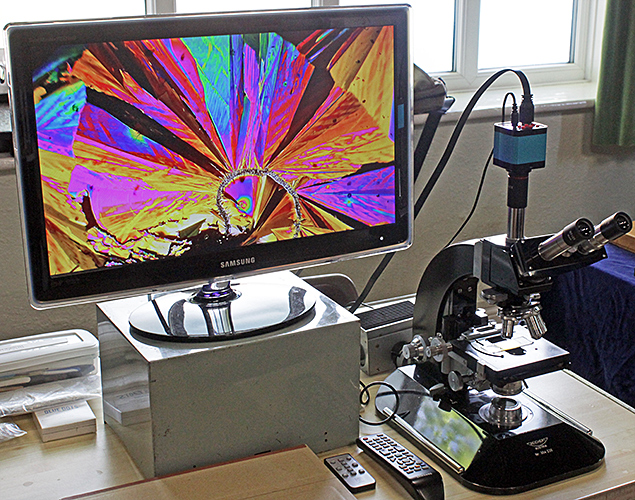 Jeremy Poole staggered into the hall with a box so big that we thought he had brought his SEM, but it turned out to contain his Wild M40 inverted microscope. Jeremy has modified it to use a 3 W LED powered by a Brian Darnton DC power supply. He has also modified the stage to accept a plankton chamber with a base thickness of just 0.2 mm that allows a normal Wild 40× phase objective to be used. 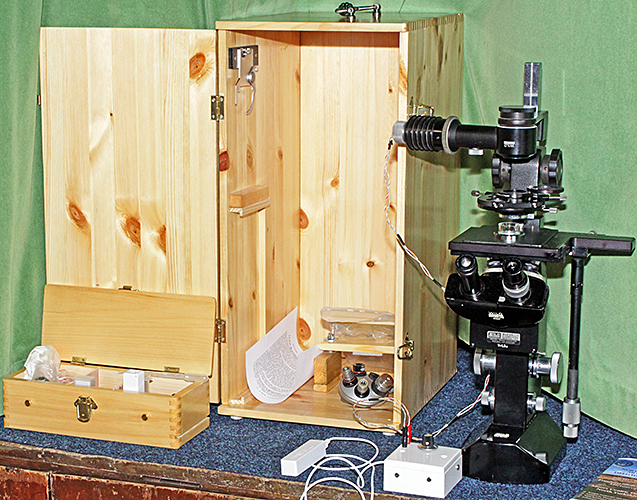 Mike Samworth had found more interesting items in Steve Edgar’s attic, including a Beck Diamax stand, Olympus OM-2N and Pentax SP 500 SLR cameras (with accessories for the Olympus including a few of the 1-12 clear focusing screens for photomicrography) and lots of books. 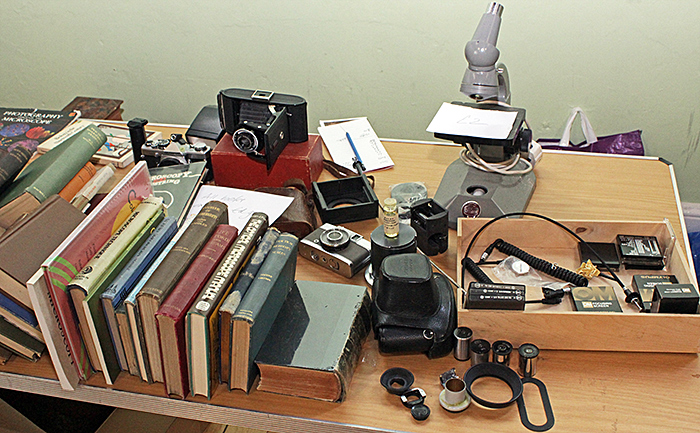 Books and equipment from the estate of Steve Edgar

Ray Sloss brought a trinocular Olympus CK inverted microscope and some pond life that was displayed via a Chinese inspection camera on a small monitor clamped to the stage. 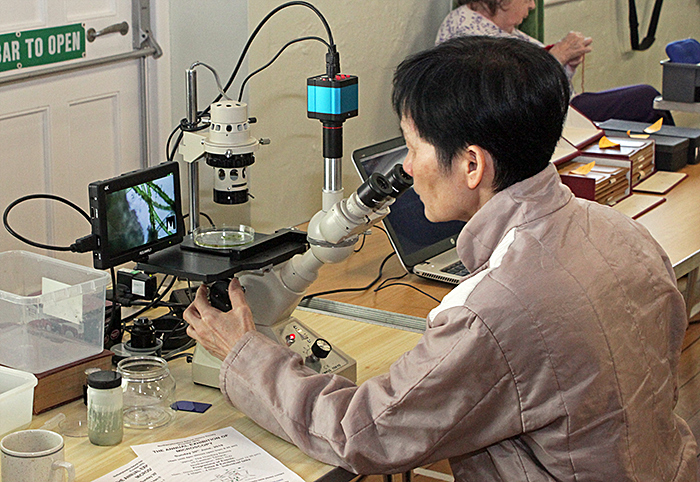 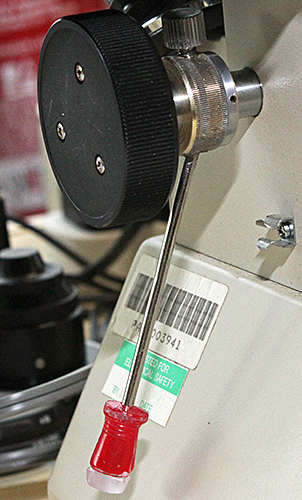 Mike Smith brought lots of stuff to give away, including chemicals, stains, mountants, glassware, bulbs and a wide assortment of bits and pieces, and probably had the most popular table. 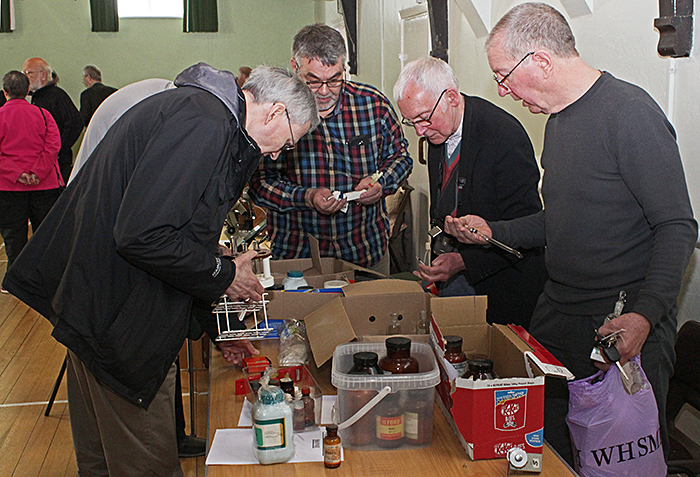 Free to a good home (John Rhodes, Lawrence Hartley, Derek Haworth and Gordon Brown making sure that Mike did not have to take everything home again)

Just before breaking for lunch, there was a short and well managed Annual General Meeting for members of the PMS.

After a break for lunch, Mike Gibson gave the first talk “A brief introduction to the Foraminifera” including their taxonomy, anatomy and evolution, with lots of photographs. He also told us about the foram collection of the Northamptonshire Natural History Society, the various species found at Dog’s Bay, and how to make dry mounts. 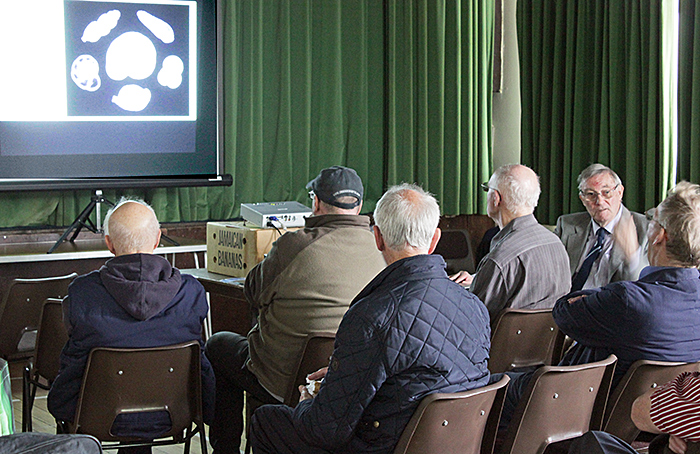 You can see the slides from Mike’s presentation here:

Click the arrows to page though the slides, click the symbol at bottom right for a bigger (and slower) version

Jeremy Poole gave the second talk “Spiders – an Anatomy from Eyes to Spinnerets, in Electron Micrographs” showing various parts of spiders in far more detail than we can see using our stereo or compound microscopes. 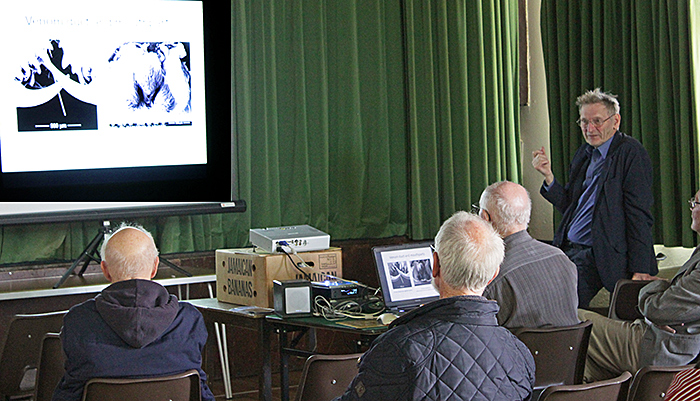 Click the arrows to page though the slides, click the symbol at bottom right for a bigger (and slower) version

Mick Chaplin showed a video with a recorded commentary “Out and About with Camera and Microscope”, a compilation of old and new material. Much of it is not directly related to microscopy but hopefully most people will find something to interest and to entertain them. You can watch the video here, in 2 parts: 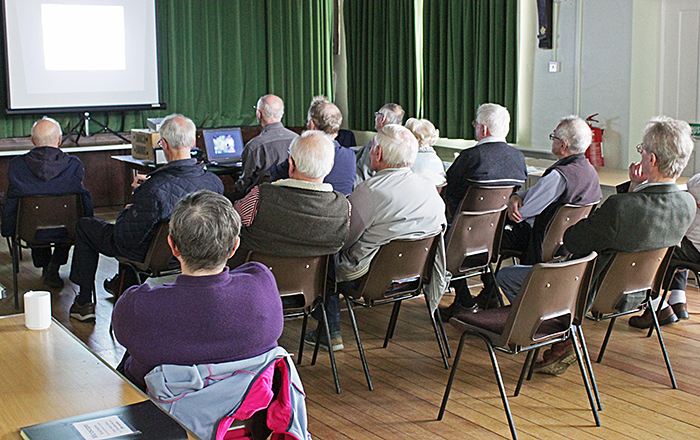 Part 1: Click the arrow to start the video; click the symbol to the left of “vimeo” for a larger version

Part 2: Click the arrow to start the video; click the symbol to the left of “vimeo” for a larger version