The Northamptonshire Natural History Society is fortunate to own The Humfrey Rooms in Northampton where the main hall was used for the Annual Exhibition of the Microscopy Section. So in addition to the tables full of microscopy exhibits, demonstrations and sales, we could also examine the interesting books, specimens and equipment all around the walls of the hall. 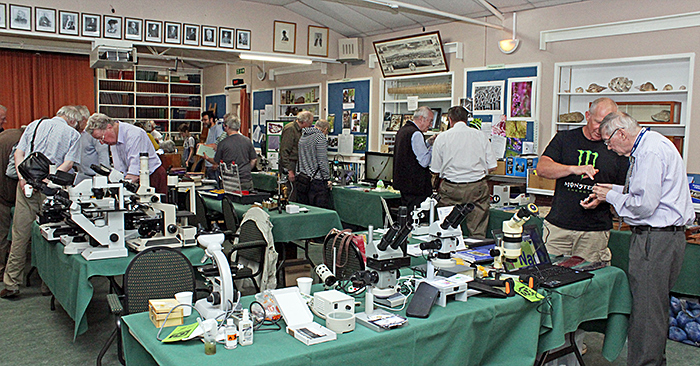 General view of the exhibition

Joan Bingley brought the Quekett Shop with books and binders for sale and free copies of the Bulletin and the Journal. Joan’s exhibit was samples of black and yellow sands from Iceland that we could examine under a simple stereomicroscope from Brunel, and photographs of the locations. Most beach sand in Iceland is black and of volcanic origin, but there is one beach with yellow sand. 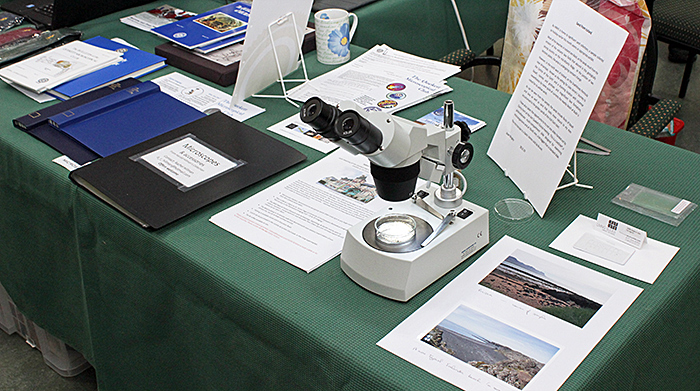 Joan also showed a LiveSlide®, a polycarbonate multi-compartment slide for examining microorganisms. Danny Ferri had obtained free samples from Living Slides so that Quekett members could try them out. 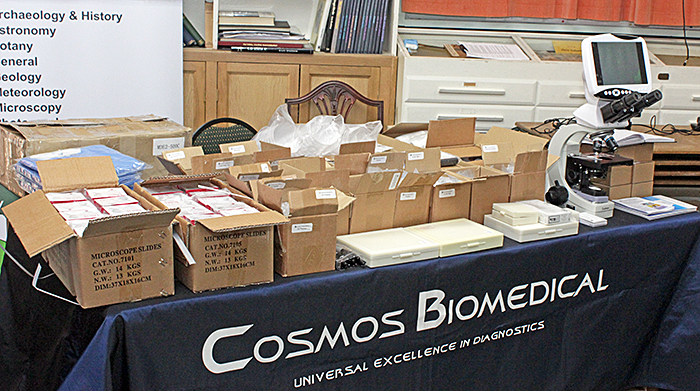 Steve Durr used his Zeiss Standard microscope to show slides from two sets of 30 slides in wooden boxes, one set of histology and the other botany. 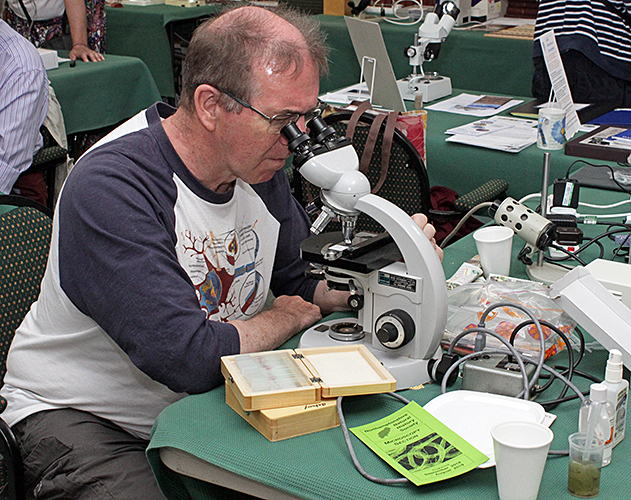 Barry Ellam is selling many of his microscopes and his daughters Alison and Kate brought several to the meeting. Highlights included a trinocular Reichert Zetopan for £150, a Wild M20 and a modern PZO binocular. There were also older compound and stereomicroscopes from makes including Bausch & Lomb, Beck, CTS, Koristka, Lomo, Meopta, Spencer, James Swift and Watson. 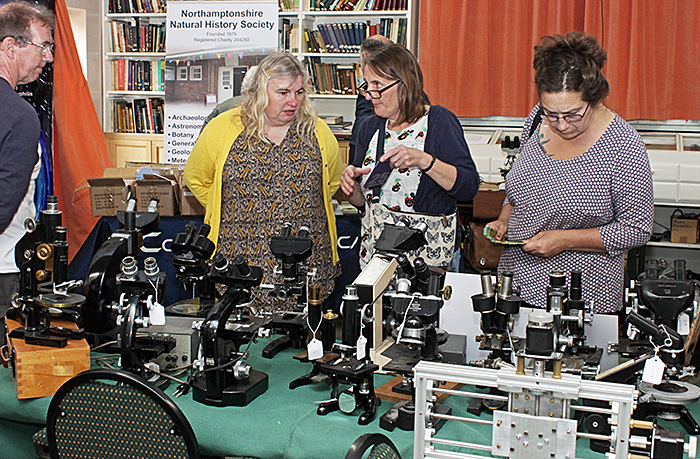 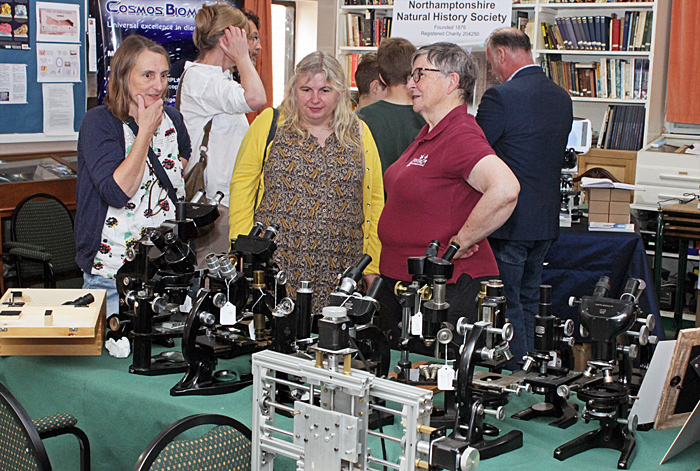 John Fletcher used a black and brass Henry Crouch monocular microscope to show some stored product beetles that he had not been able to identify. Illumination was provided by an Olympus lamp that had been converted top LED and mounted on an antique stand. 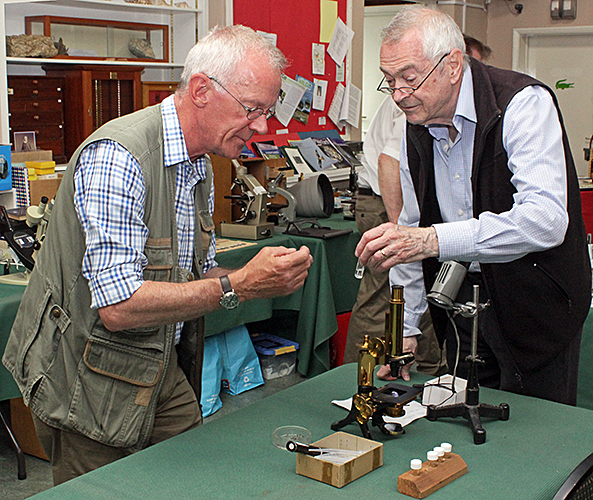 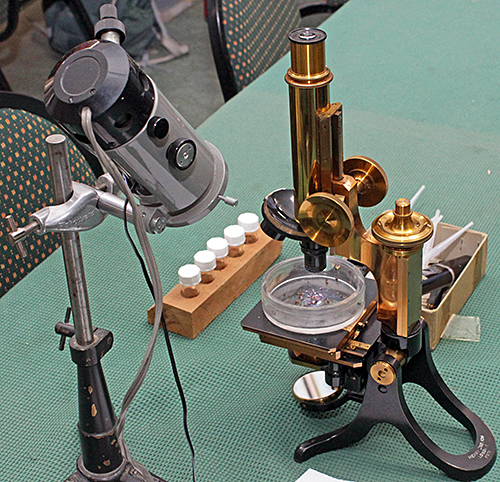 Mike Gibson showed colour prints of some of his photomicrographs and provided instructions on making acetate peels of leaf impressions. Mike used his monocular Zeiss Standard (with Rheinberg filters) and a Gillett & Sibert with a projection head to show some Biosil slides. Mike also brought a Reichert polarising microscope with incident and transmitted light, with a simple Sony digital camera on its vertical photo tube. Mike also showed some small LED illuminators that he had made. 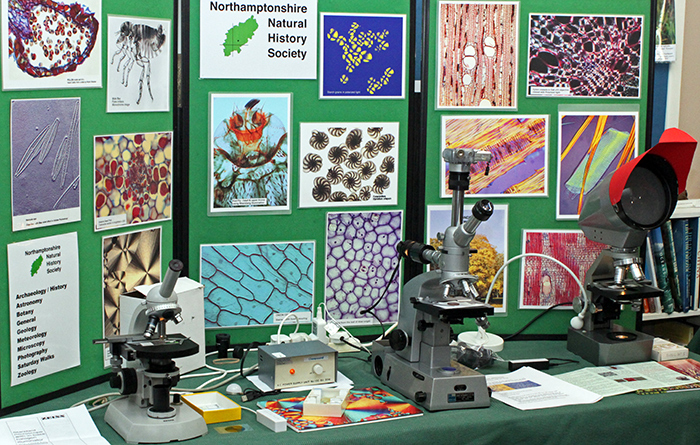 Steve Gill brought some very clean diatomite from an unknown source, just labelled “pink” and “white”, some of which contained Melosira sp., with plastic tubes so that we could take some away. Steve told us that the samples did not need processing, just add water, spread on a slide, allow to dry, add Canada balsam and finish with a coverslip. 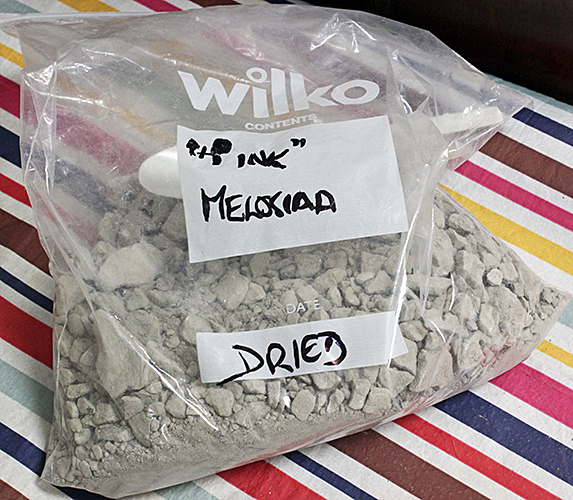 Grenham Ireland brought some live marine polychaete larvae from Poole Harbour, displayed on a large screen via a Chinese inspection camera mounted on the stand of an Olympus stereomicroscope. He also showed colour prints of the larvae. Grenham also brought a Wild M4A stereomicroscope with a dense sample of aquatic organisms. 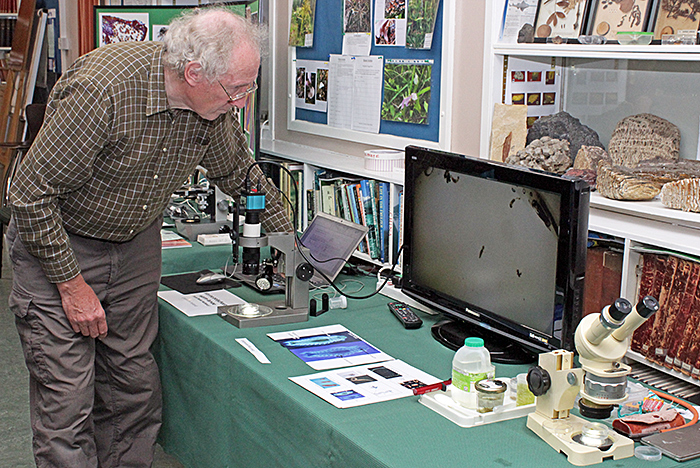 Grenham Ireland with his exhibit 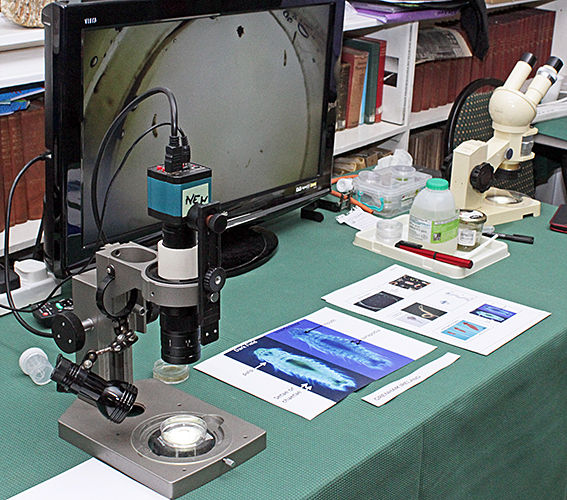 Colin Lamb was selling lots of the slides that he had made, £2 for dry-mounted forams or seal whisker sections in Canada balsam, or £1 for dogfish testis sections. 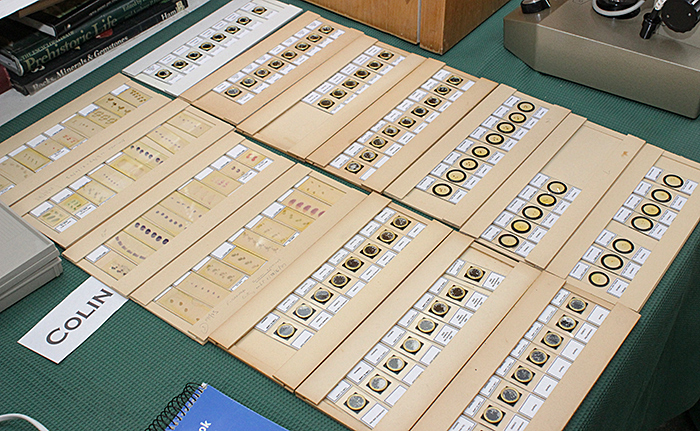 Colin also brought his Meopta stereomicroscope that has a tilting stand and a head that can be tilted and moved away from the stand, allowing specimens to be examined from unusual angles. One of the slides was of Melophagus ovinus, a parasitic fly that feeds on the blood of sheep. Colin also showed a slide that he had made of phasmid eggs, with the specimens enclosed in a coin capsule glued to a slide.  Coin capsules are used by coin collectors and come in a wide range of sizes; ones for 22 mm diameter coins just fit on a 75×25 mm slide. 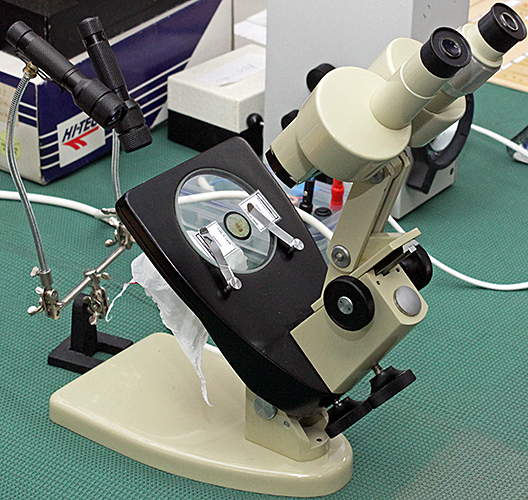 Colin was also selling items from Les Larkman’s estate, including a Prior monocular microscope, a projection head, lots of eyepieces and objectives, a few condensers, test-tube racks and a Zip drive. 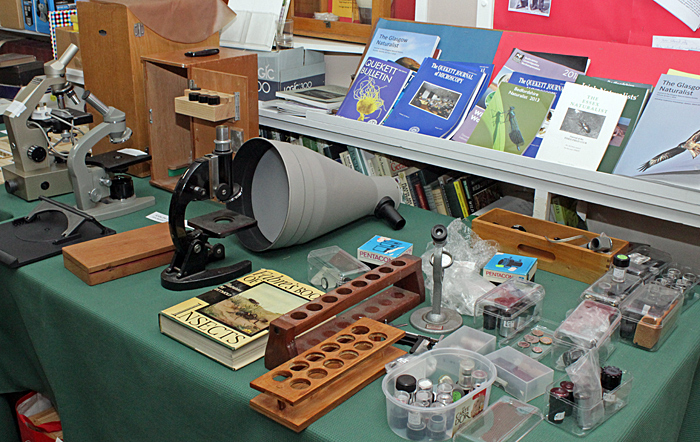 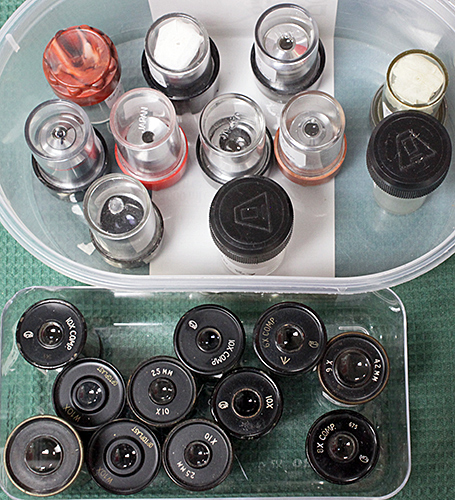 John Millham had a good range of used equipment for sale, including a trinocular Olympus BHS (complete with Photomicro Adapter L), an Olympus CK2 inverted, a Nikon Eclipse 50i, a Wilovert inverted, a trinocular Leica DM2000, a Leitz Dialux, a Leitz Diaplan, a trinocular Nikon compound, a Wild M20, and lots of eyepieces, objectives and accessories. 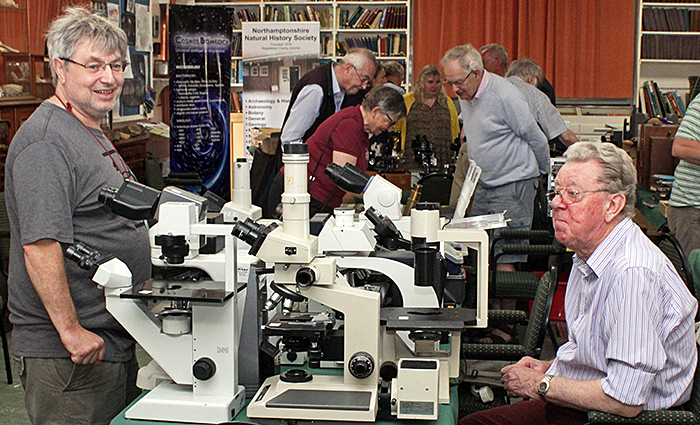 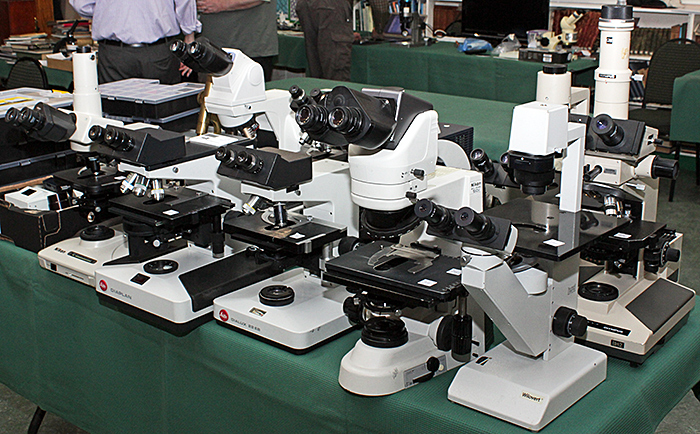 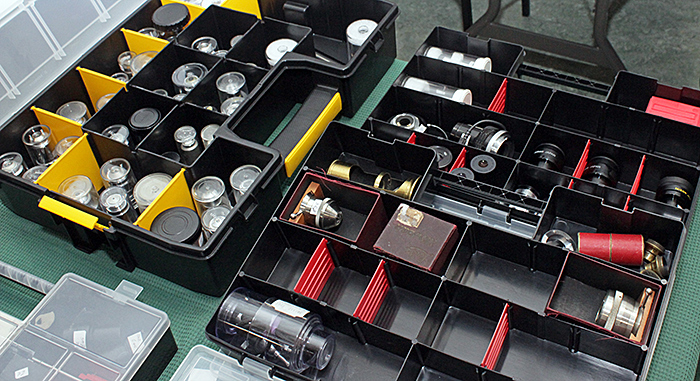 Robert Ratford brought some unusual slides of ash and other material from the 1944 Mount Vesuvius eruption; the slides were black plastic with removable coverslips. To examine the slides, Robert provided two Lomo МБС-10 stereomicroscopes. Robert also brought a Wild M7 stereomicroscope with a camera in one of the eyepieces tubes so that we could examine different types of printing on a laptop with Micro-Capture software. 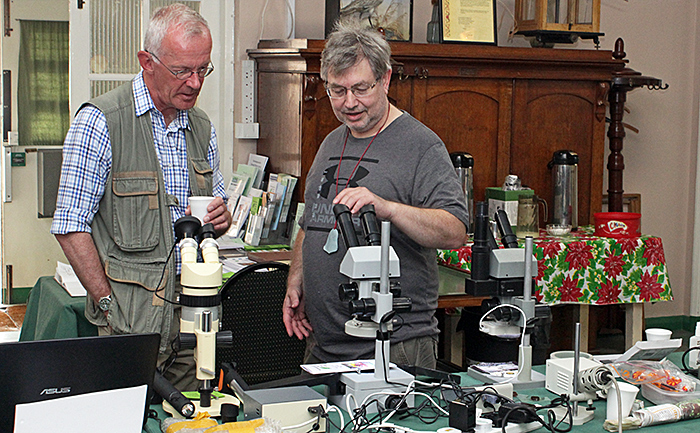 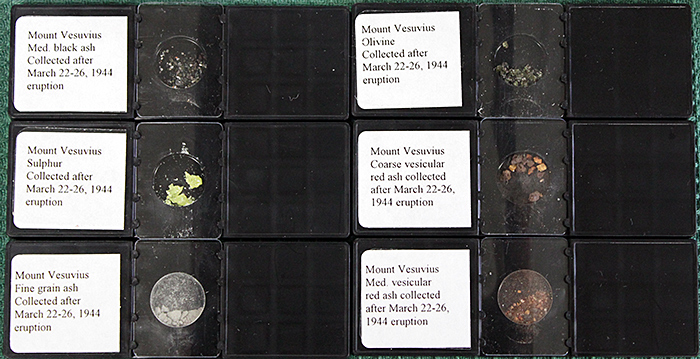 Slides of ash from the 1944 Mount Vesuvius eruption

Mike Samworth was selling more items from Steve Edgar’s estate, plus lots of books from John Bottomley and Barry Nattrass, a sturdy monocular microscope, and the skeleton of a 3D printer (from Steve Gill’s brother-in-law) that could probably be adapted to move a camera over a large subject for stitching. 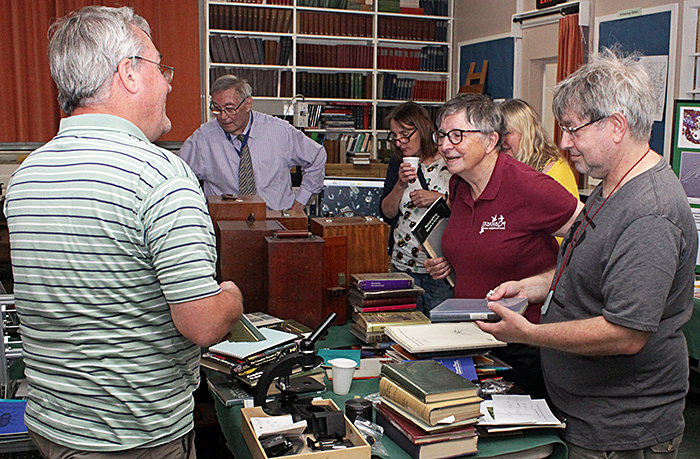 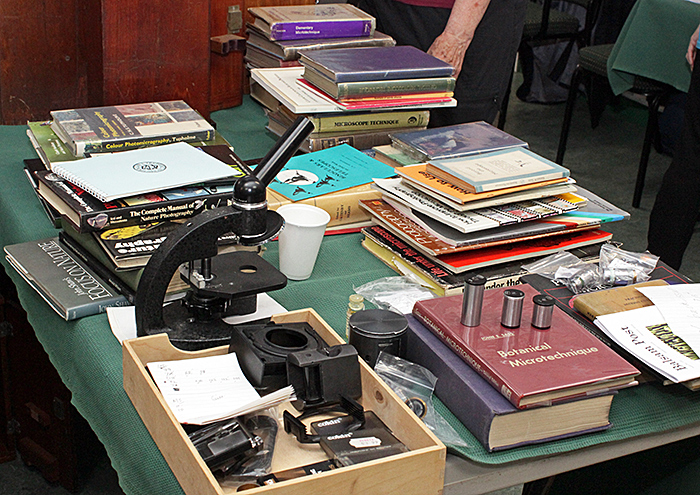 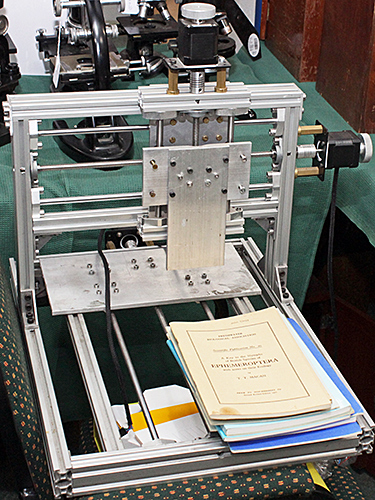 Part of a 3D printer 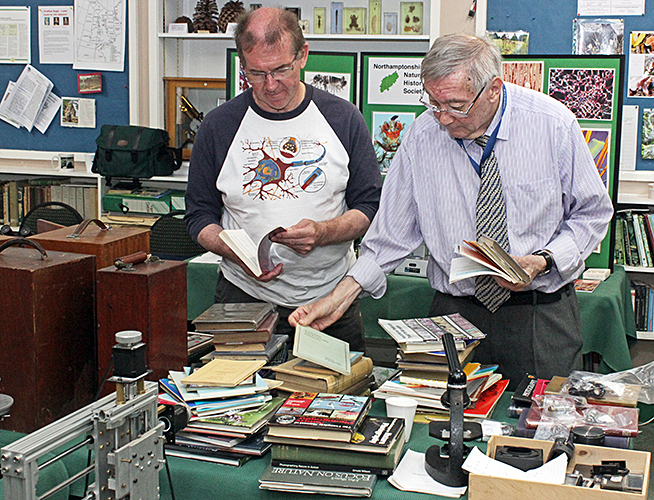 Mark Shephard was selling some sets of slides and a few books. 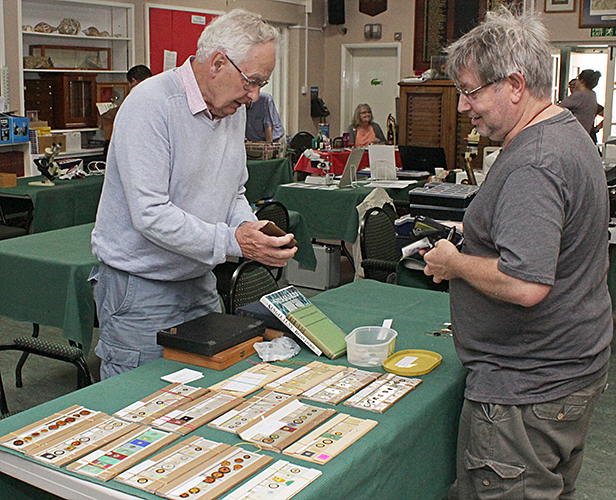 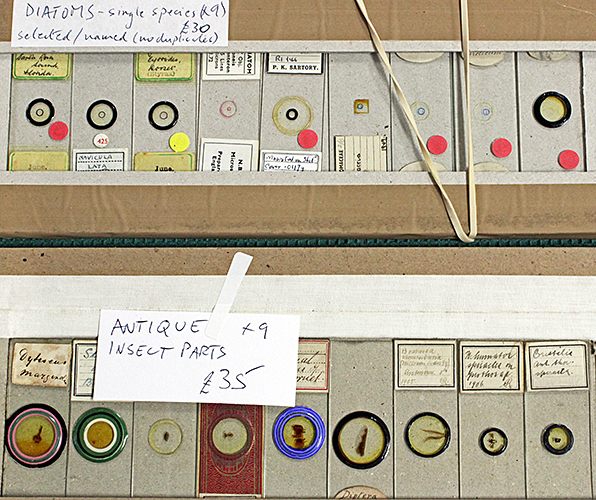 The Deputy Mayor of Northampton, Brian Sargeant, visited the exhibition. 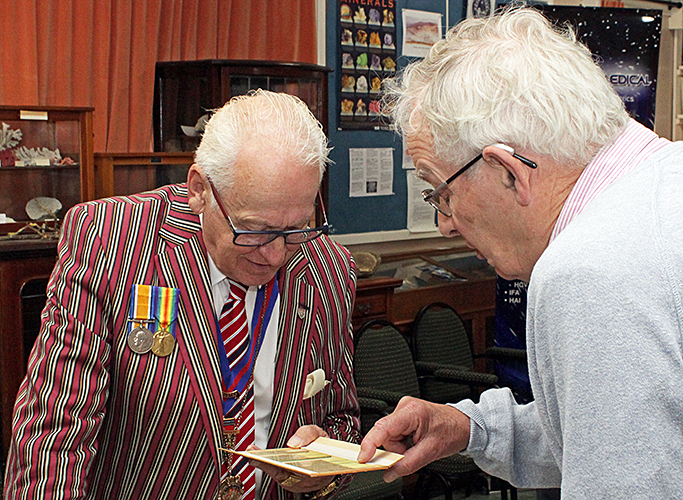 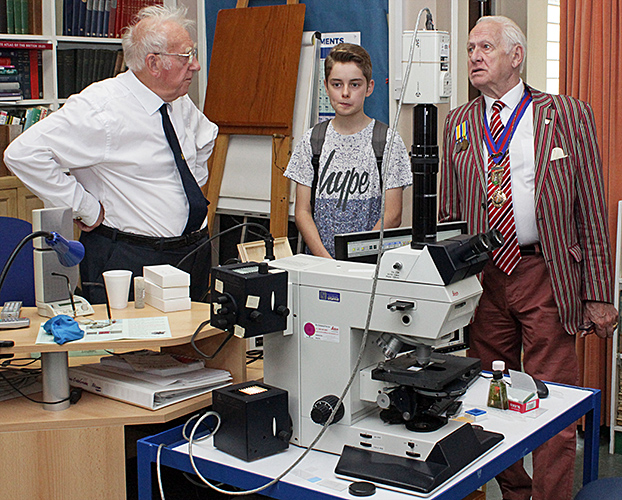 After a break for lunch, Mike Gibson gave a talk on Sir Edward Elgar, who is best known as a composer but was also a keen amateur microscopist. Mike had spoken on this topic before, but had uncovered more information. During the discussion after the talk, it emerged that 2 members of the audience had seen microscopes that belonged to Elgar, but their present locations were not known. One of Elgar’s microscopes had been on display at the Elgar Birthplace Museum but had been removed. 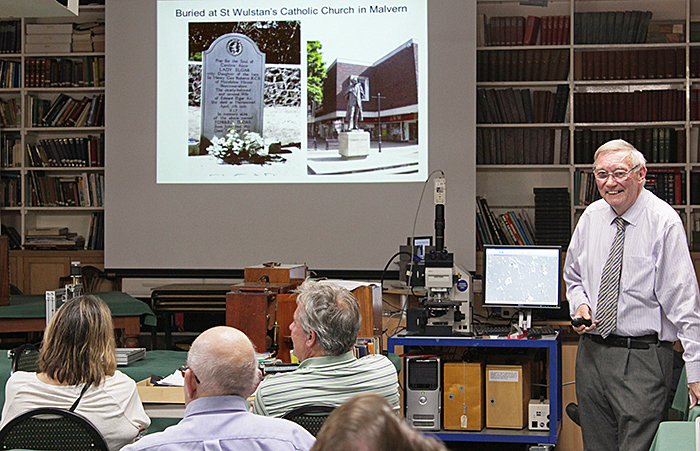