This year the spring meeting in the Village Hall at Langton Matravers in Dorset was organised by Pam Hamer, who has taken over responsibility from Derek Stevens and Brian Darnton. The event was attended by a good crowd of microscopists from the Quekett and the Postal Microscopical Society, and also attracted several visitors thanks to some local publicity. 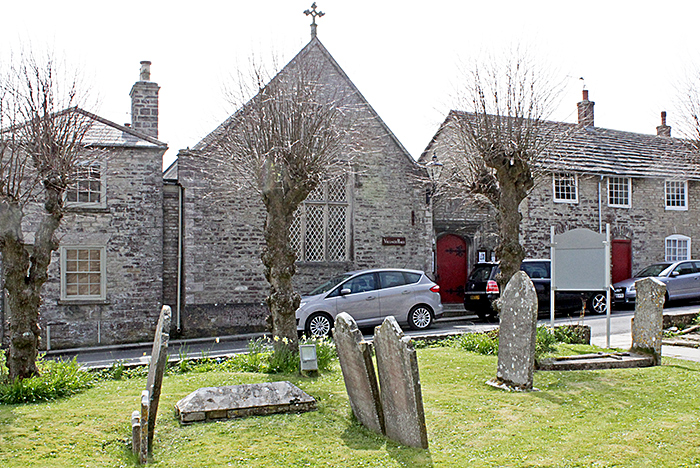 Joan Bingley was trying out exhibits for the Big Bang @ Weston and the RMS Microscience Microscopy Congress, where the Quekett will be demonstrating to families and to other microscopists. She used a Chinese inspection camera linked to a television to show pond life lit by a dark-ground illuminator designed by Carel Sartory using a kitchen bowl and an LED ringlight. Joan also showed an NBS Polarspex (designed by Eric Marson) for examining slides under polarised light, a fern scale slide by Brian Danton, a couple of diatom slides by Klaus Kemp, and some cheap commercial plastic slides. 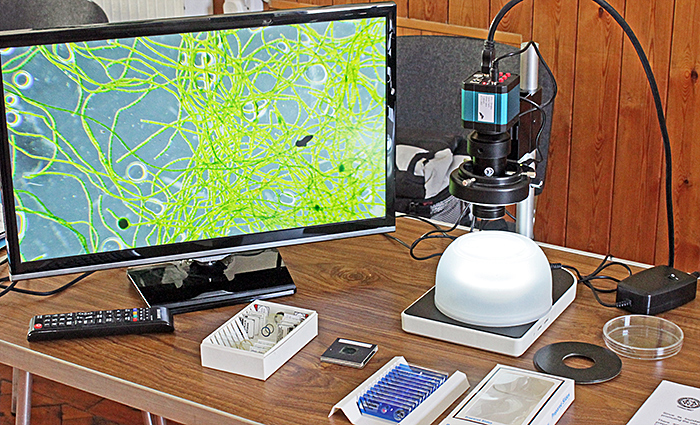 Pond life displayed with an inspection camera and a televsion

Joan also showed a First Day Cover of the stamps commemorating the 150th anniversary of the Royal Microscopical Society.

Stamps commemorating the 150th anniversary of the Royal Microscopical Society

Joan also brought along the Quekett Shop (with books, notelets, binders and ties for sale, and free copies of the Bulletin and the Journal), and some photographs that have been exhibited at annual exhibitions. 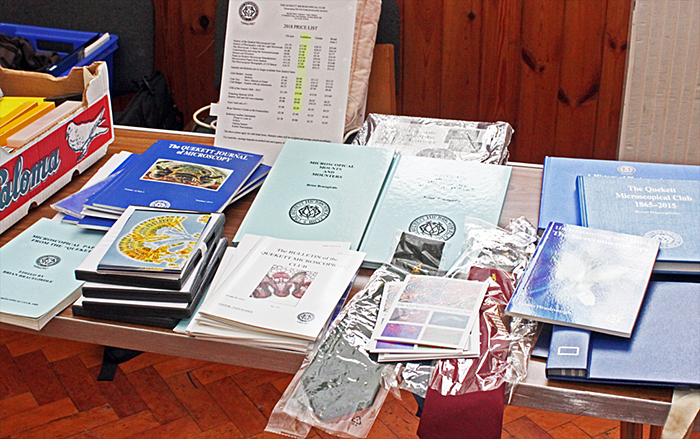 Joan also brought an album of photographs of equipment from the estate of Harold Hillman so that anyone interested could contact his family. 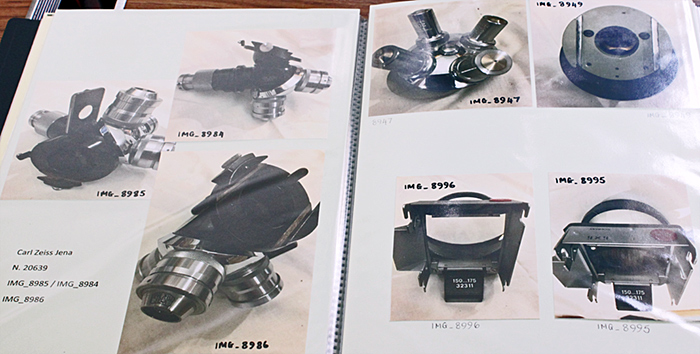 Mervyn Bown always manages to come up with a new exhibit, and this time his subject was flight. He brought along some large insects in glass-topped wooden boxes with a magnifying glass for a closer look, and some slides that he had made. We were able to view the slides under Mervyn’s trinocular Leitz Laborlux K, or on a Samsung television via his Canon EOS 5D Mark II. 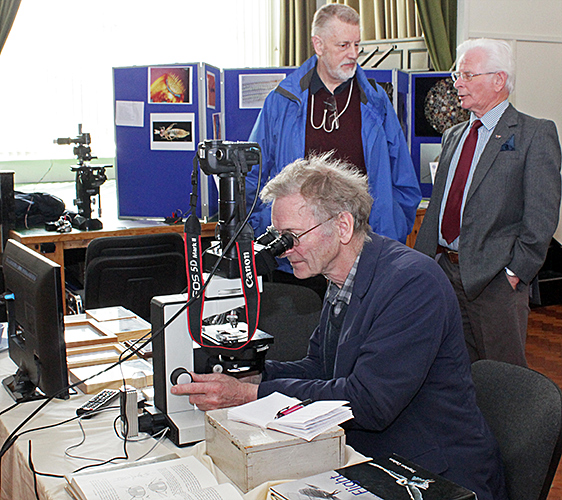 Some of Mervyn Bown’s slides

Mervn also showed some relevant books, The Miracle of Flight by Stephen Dalton and Anatomy of the Honey Bee by R. E. Snodgrass.

Adrian Brokenshire brought along a wooden cabinet of nicely-prepared forams and shells from sand (on black and white backgrounds) that we were able to admire using his Meiji BM long-arm stereomicroscope. As usual, Adrian was very kindly giving away bags of shell sand and other materials. 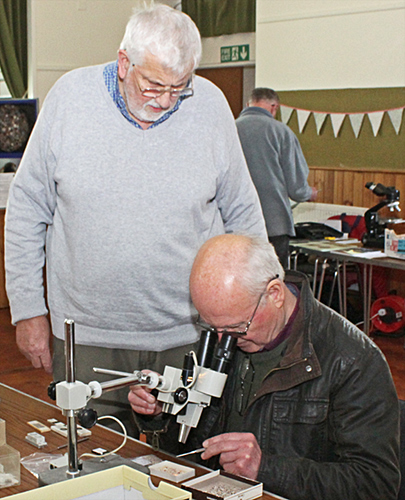 Adrian Brokenshire with a visitor 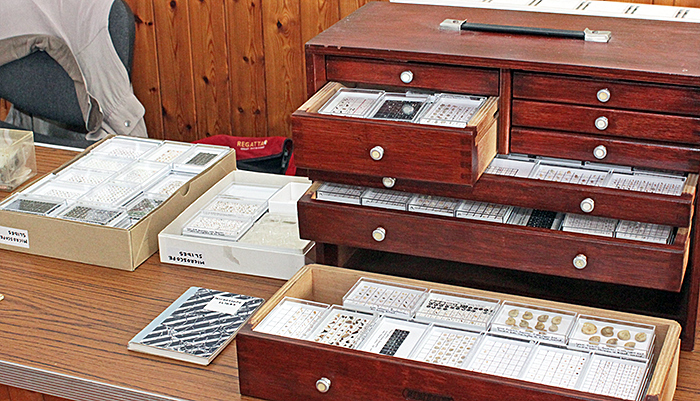 Some of Adrian Brokenshire’s specimens

Michael Cook sent along some of his photomicrographs of diatoms mounted by Klaus Kemp. 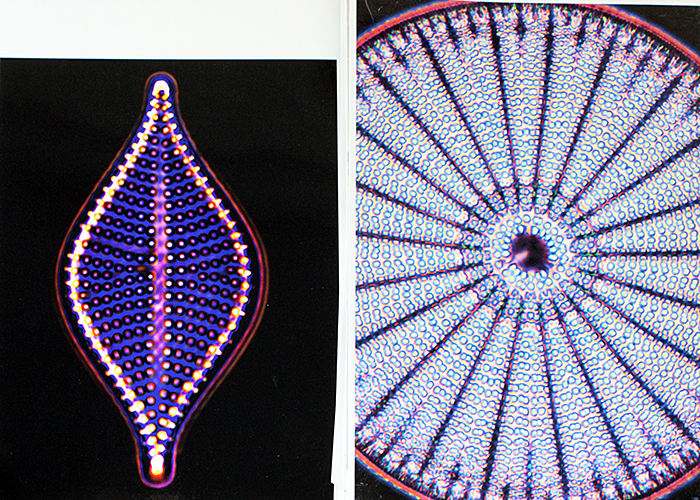 Brian Darnton used a black and chrome Beck London Model 29 monocular microscope and a black and brass Henry Crouch monocular microscope to show slides that has made of forams from Dogs Bay in Ireland, arrangements of plant scales and some other slides from his collection. Brian also had documentation about the HMS Porcupine expedition and the forams from its dredgings. He also used carefully set up crossed polarisers and a retarder to show the shells of testate amoebae. 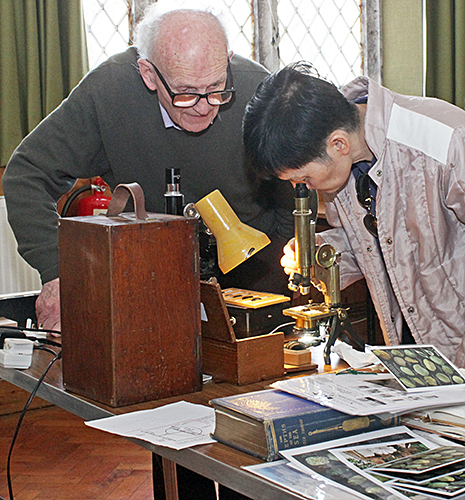 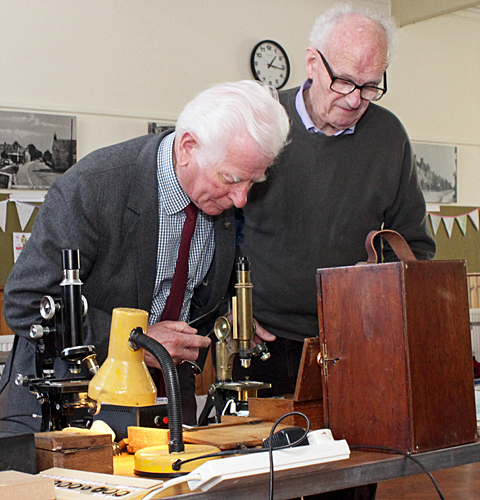 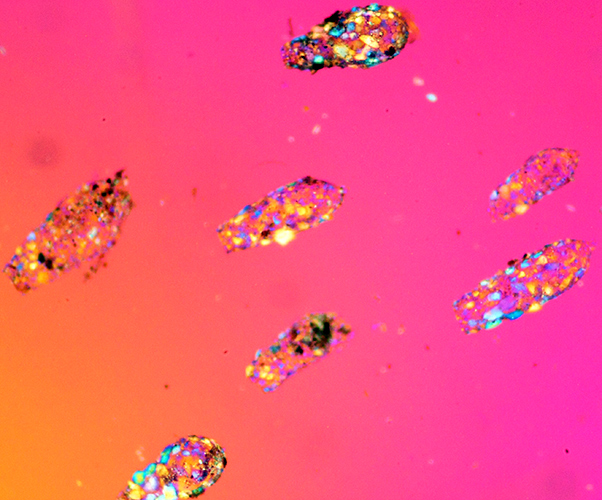 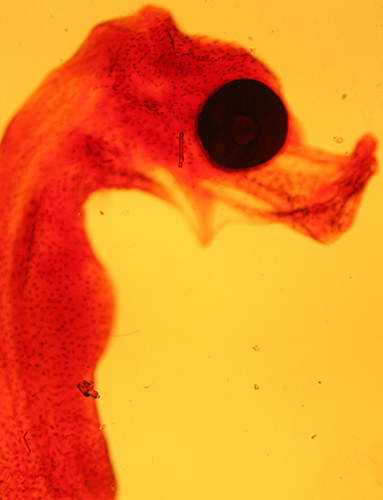 Microphotograph of the Natural History Museum

Brian was also selling some of the slides that he has made, for just £2 each.

Pam Hamer’s topic was garnet, a deep red stone used in jewelry, and she brought samples from north-west Scotland and from Lundy that we could examine using her Vickers stereomicroscope. Pam had also prepared small samples for examination by transmitted light using her Vickers polarising microscope; the garnet crystals did not show any polarisation crystals because they have an isotropic cubic structure, but the accompanying hornblende crystals are monoclinic and anisotropic and did show polarisation colours. 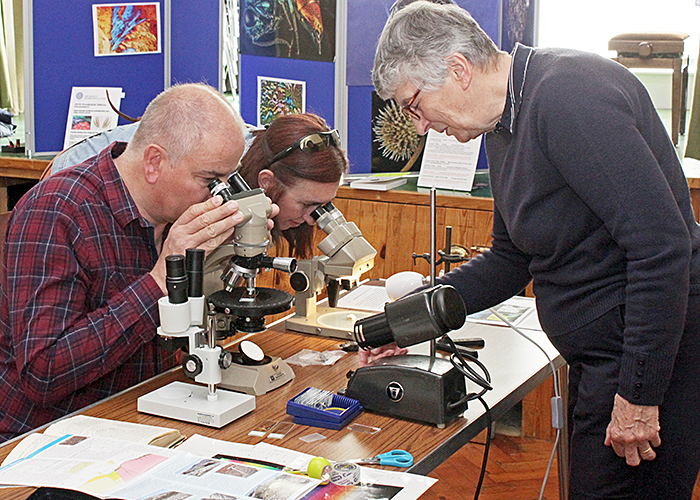 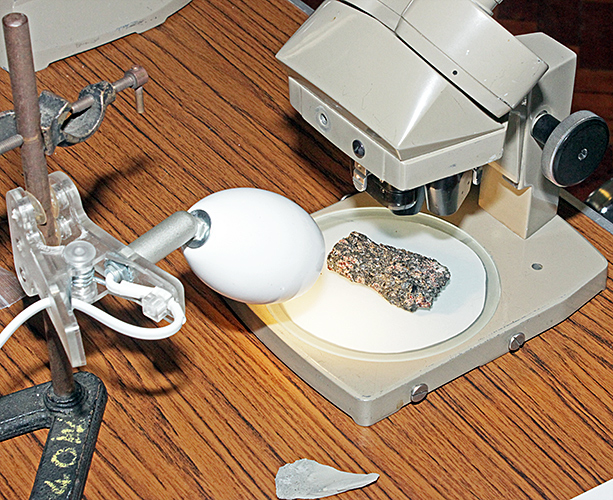 Pam also brought some technical notes on polarised light and the colours that it can produce, including a Michel Lévy color chart from Carl Zeiss. 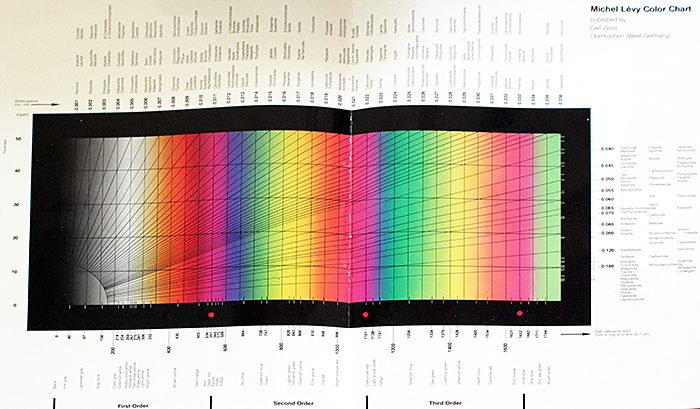 Klaus Kemp showed the microscope that he uses for arranging diatoms and scales, a Lomo stand with a Leitz trinocular head, a Beck ½ inch objective that provides the optimum magnification and working distance, and a Wild illuminator. The whole assembly is mounted on plastic blocks and wooden boxes to bring it to the height that allows Klaus to work for extended periods without straining his neck. A micromanipulator is mounted through the rear of the stage, allowing Klaus to manipulate diatoms and fine focus with the same hand. 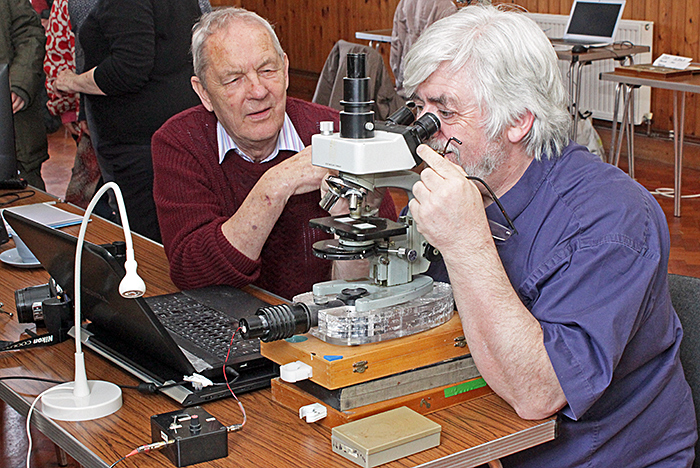 Klaus Kemp with a visitor 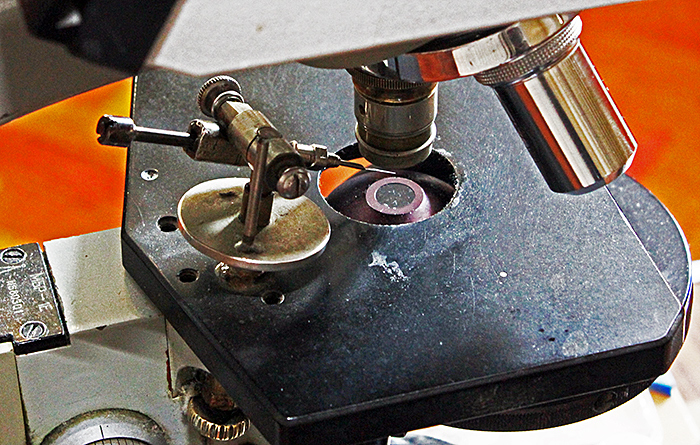 Jeremy Poole showed 2 LED power supplies, one based on a buck converter and the other designed by Brian Darnton. 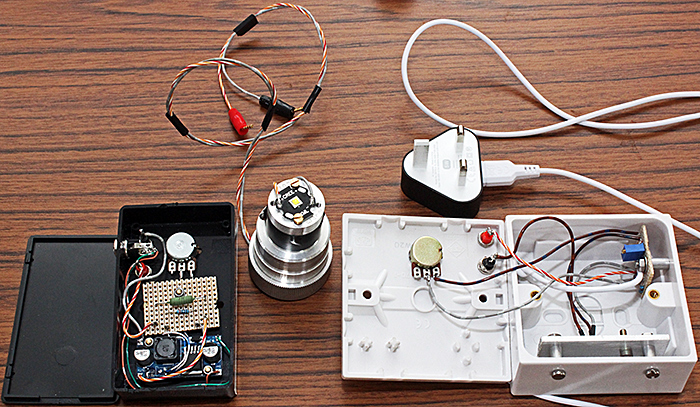 Jeremy also brought his Wild M40 inverted microscope that now uses a 3 W LED powered by a Brian Darnton DC power supply. The stage had also been modified to accept a plankton chamber with a base thickness of just 0.2 mm that allows a normal Wild 40× phase objective to be used. 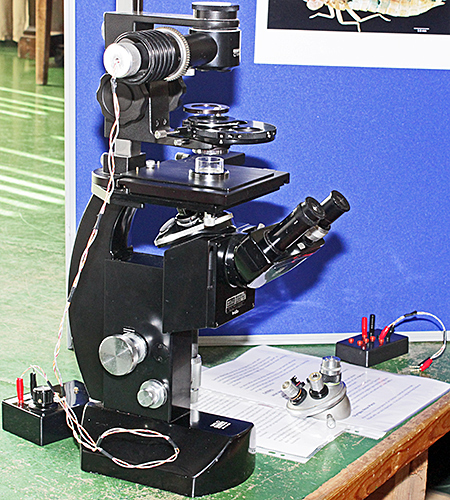 Alan Wood responded to a request from a new Quekett member interested in photomicrography and crystals by bringing his trinocular Olympus CH-2 with a Canon EOS digital SLR controlled from EOS Utility running on a laptop computer. Alan also brought some slides of crystals and rock sections, a linear polarising filter from a camera, and an assortment of makeshift retarders from CD wrappers, greeting card wrappers, windows in cake boxes, etcetera. 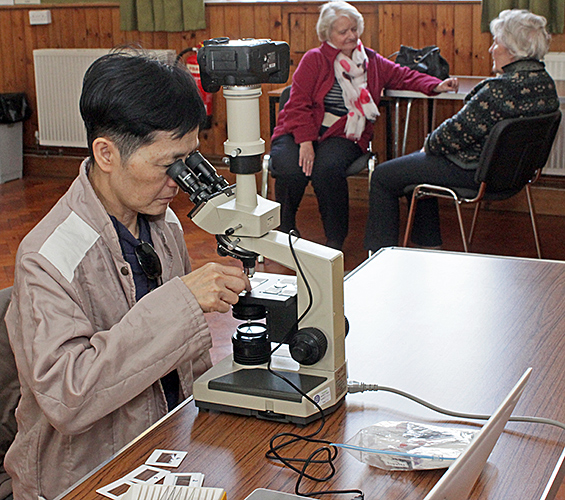 Thanya Nirantasook (with Sheila Kemp and Margriet Darnton in the background)

Our thanks to Pam Hamer for organising another enjoyable and successful meeting, and to Margriet Darnton and Sheila Kemp for keeping us supplied with coffee, tea and biscuits.