Home | About the Club | Meeting reports | Festival of Geology

It was not only a horrid morning with heavy rain and gales, but also England were playing in the final game of the Rugby World Cup. It was perhaps not surprising, therefore, that the first hour of the show was quiet. The Festival of Geology was organised by the Geologists’ Association and held at University College London in Gower Street, where two of the cloister corridors were devoted to a variety of display stands, an adjacent room was set up for children to explore geology as part of the Rockwatch programme and three excellent lectures took place in the lecture theatre.

Displays in the cloister corridors

The display stands included a variety of commercial and Association booksellers, both new and second-hand. There were also people selling jewellery, lots of interesting minerals and fossils and even  geologically-themed chocolates. The majority of displays were, however, by local groups of the Geologists Association and they highlighted local projects to publicise geology in their area along with detailed reports of field trips to interesting venues. 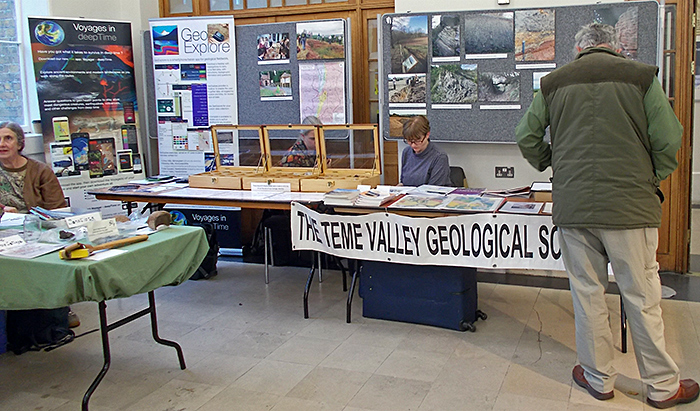 Display by a local group

The Club display, set up by Pam Hamer with help from Stephen Parker, featured petrology and included information on Charles Caffyn, a Club member who produced rock thin section slides in the early 1900’s, using  a cutting and polishing machine powered by a repurposed treddle Singer sewing machine (this fascinated many visitors to the stand). He left his collection of some 800 slides to the Club.

Slides from the Caffyn Collection

Caffyn also produced a small book describing his slides illustrated with his own photographs. Several of these slides are still in our loan collection over 100 years later and they were displayed on two portable polarising microscopes.The story and slides attracted a lot of attention and we were so busy we didn’t get to see any of the other displays for some time. People were asking where they could get petrological microscopes at modest cost (Reading Convention and Microscopium) and how to record and display images (we used an Eyecam from Brunel Microscopes). Quite a few members who do not attend meetings called by, as well as some more familiar members. 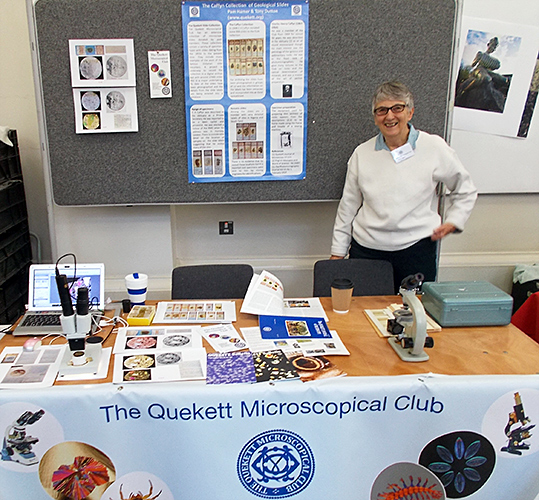 Pam Hamer with the Quekett display

Kit Brownlee has been attending these events for some time with the Reading geological group and Dennis Fullwood is a key player in the Rockwatch display, showing children microfossils and encouraging them to use the microscopes to make slides. 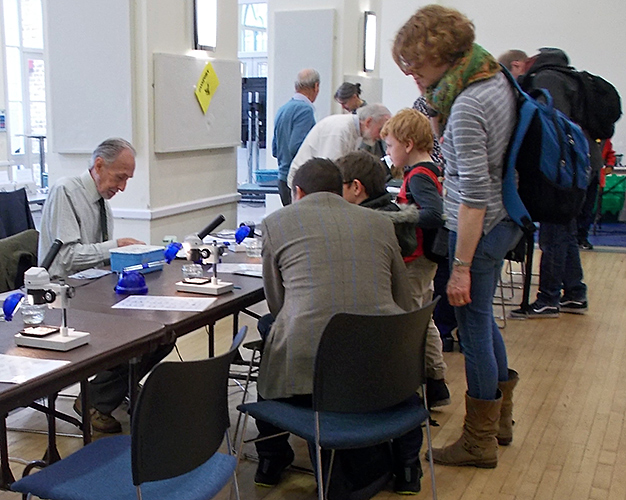 Dennis Fullwood with the Rockwatch display

Our display of historical slides, with a story, along with more modern display microscopes seemed to work well and we hope to be back next year.