Despite a rail strike on South Western Railway,  a good crowd of members turned up for this meeting in the PA135 Meeting Room in the Natural History Museum, and brought some very interesting slides with them.

The meeting started with a talk by Phil Greaves, illustrated with slides from his collection. Phil introduced us to the types and history of arrangements, people who have made them, dry mounts and mounting media, and the difficulty of including data about the specimens. 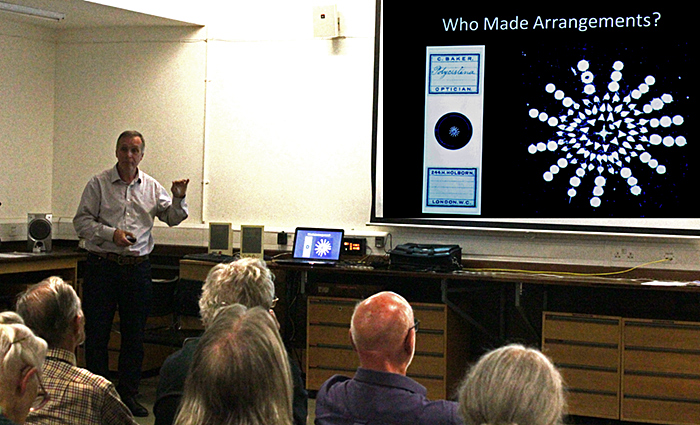 Lisa and Nigel Ashby brought some arranged slides that were sold by Watson, with a magnifier for examining them. The specimens included a leaf of box, elytra of diamond beetle, a honeybee, fish scales, hummingbird feathers and grains of wheat. 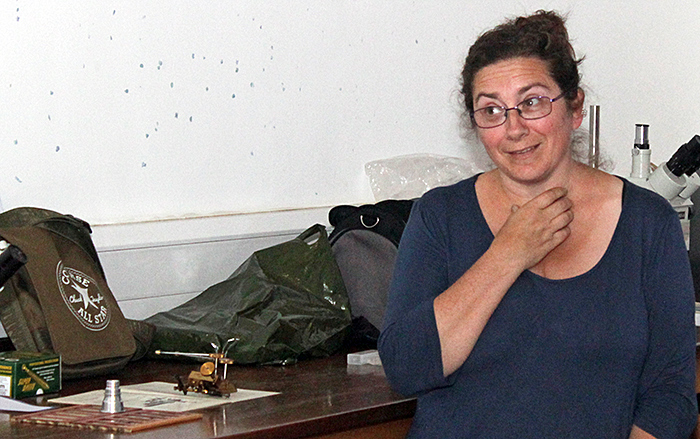 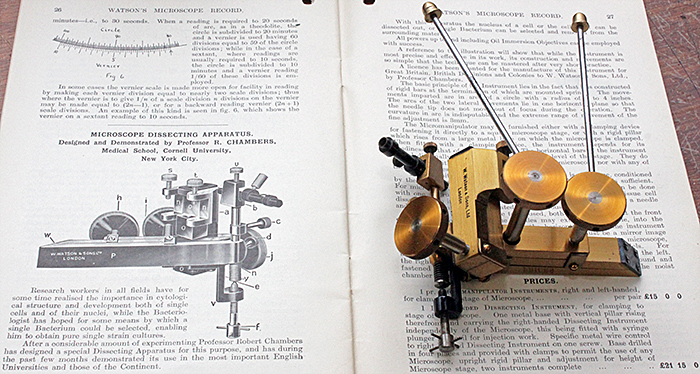 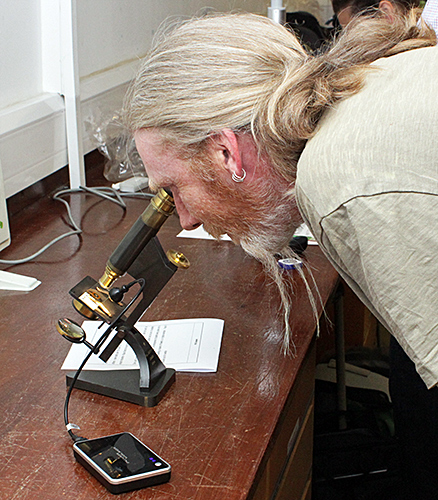 Joan Bingley used her small stereomicroscope to show 4 slides made by Quekett members. They were a foram arrangement by Brian Darnton that included the names of the specimens, a vase of flowers made from butterfly scales by Klaus Kemp, and 2 slides made by Vaughan Dodge, a dry mount of seed scales and sand from Cyprus. 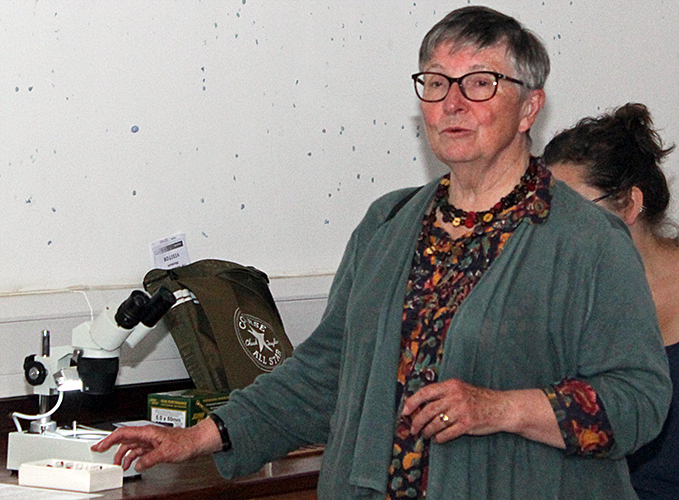 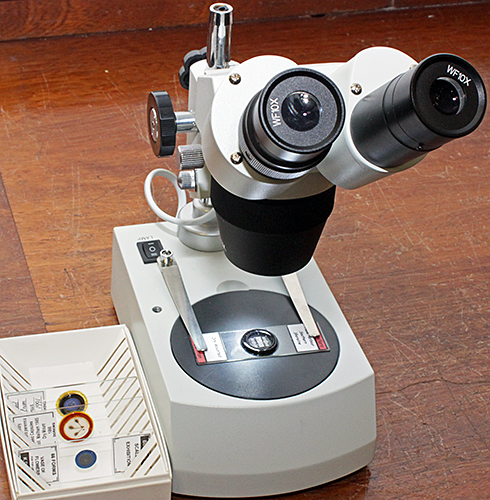 Joan also reminded us that some Quekett members (including Brian Darnton, Colin Kirk, Mike Smith and Klaus Kemp) sometimes sell their slides at meetings outside London.

Danny Ferri had seen an announcement on the Amateur Microscopy Facebook Group about the LiveSlide®, a polycarbonate multi-compartment slide for examining microorganisms. The seller, Living Slides, was offering free samples, and Danny asked for lots so that Quekett members could try them out. It is 76×45 mm, a bit bigger than a standard slide 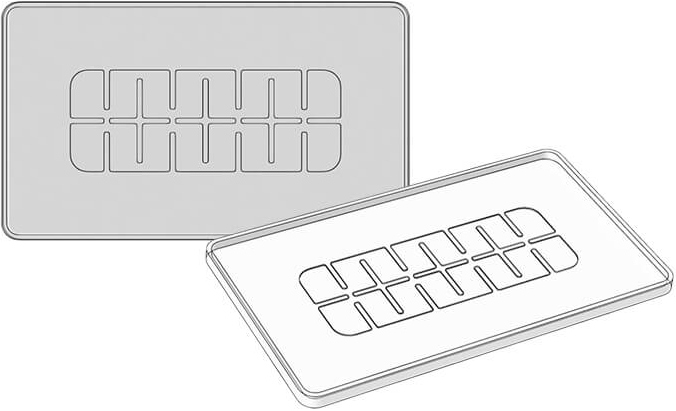 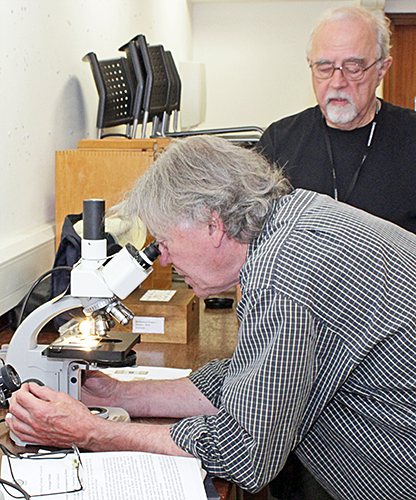 Dennis Fullwood used the Club’s Chinese inspection camera to show a slide sold by Watson of hummingbird feathers, lit by an Ikea Jansjö lamp. This looked impressive on the monitor, and looked even better after David Linstead added a Kleenex tissue to provide more diffused illumination 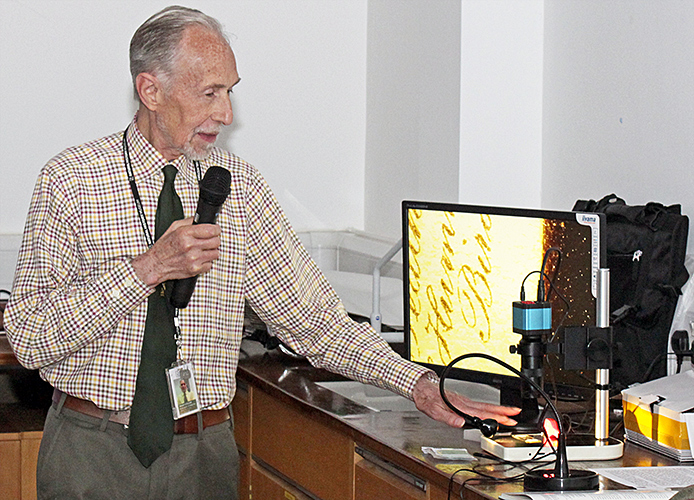 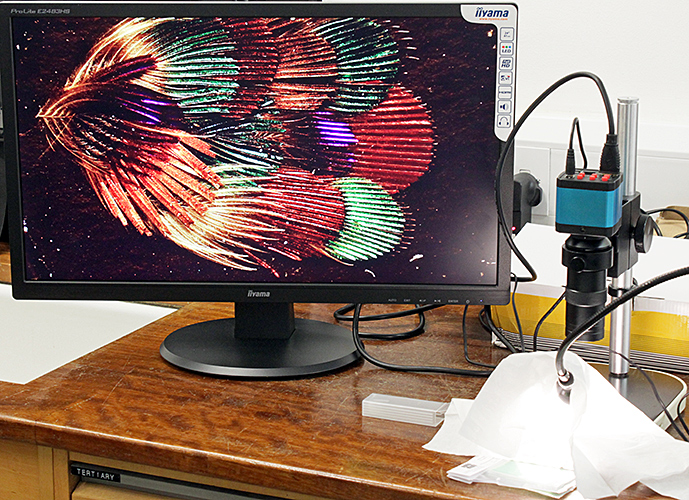 Dennis also brought a Sherlock Holmes 50 pence piece that lists the titles of the novels and short stories in letters so small that you need a stereomicroscope to read them. 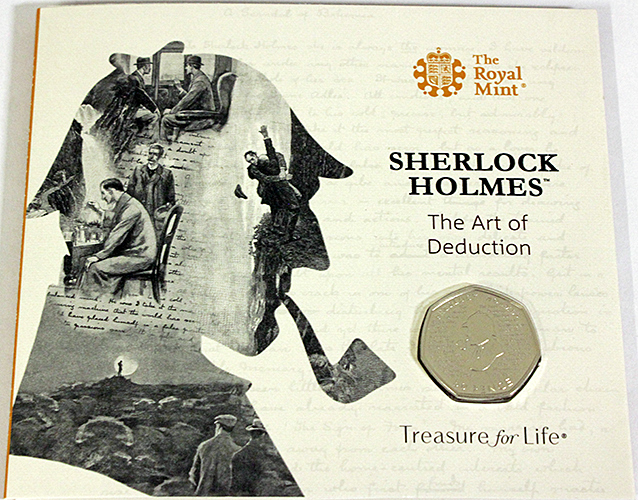 Dennis also showed a box of slides with sections of coal, recently acquired on eBay. 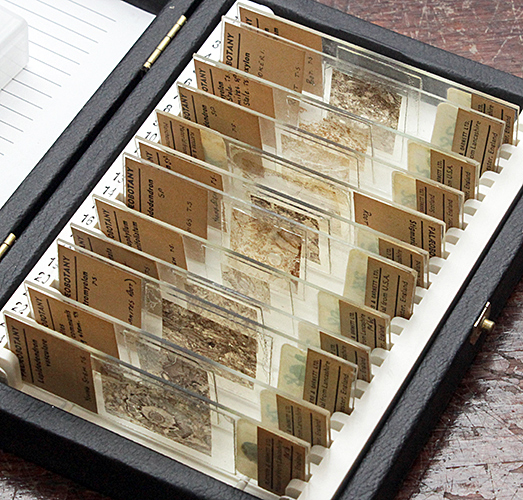 Phil Greaves brought a slide made by Norman Groom, who depicted a vase of flowers using butterfly scales and a few diatoms. To show the slide, Phil brought a small black and brass monocular microscope by R. & J. Beck, with illumination provided by an Ikea Jansjö LED USB lamp power from a powerbank. 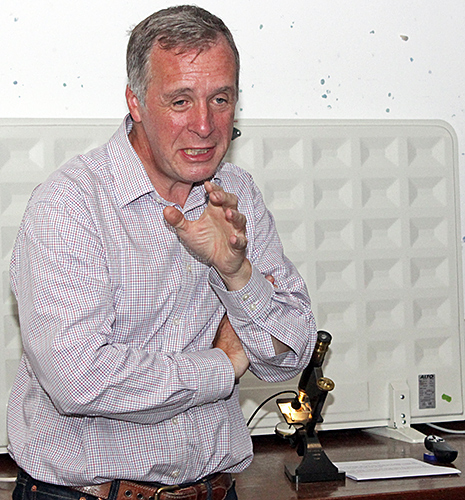 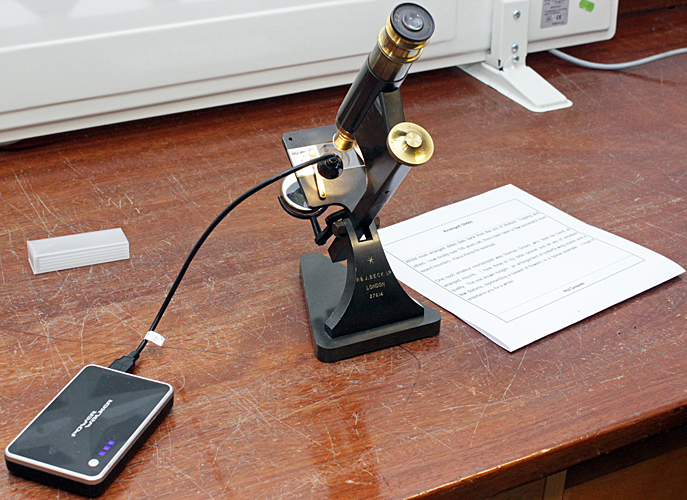 Grenham Ireland used to work with slides of chick embryos but did not own any until he recently bought a set of slides made by E.S.P. (Educational and Scientific Products Ltd) from Brunel Microscopes. In addition to the slides, Grenham showed some prints of photomicrographs. 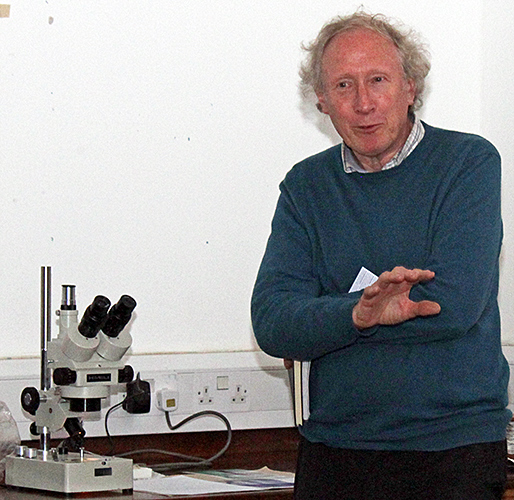 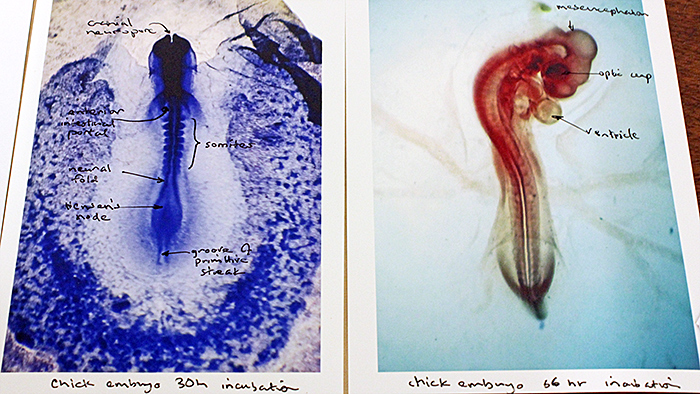 David Linstead used one of the Club’s Zeiss Standard microscopes to show an excellent diatom circle made by Steve Beats, with the diatoms placed very close to each other. The slide was one of Steve’s early efforts, made before he learned how to filter the adhesive to remove lumps. 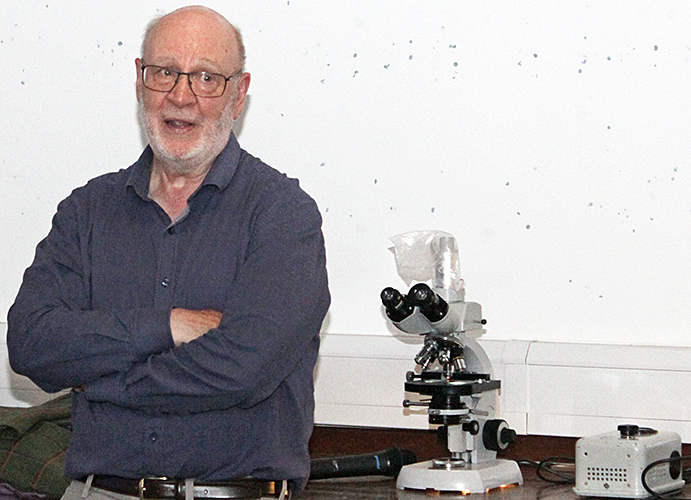 Stephen Parker brought his Newton Nm1 portable microscope (sadly no longer being made) to show some diatom arrangement prepared by Bernard Hartley. 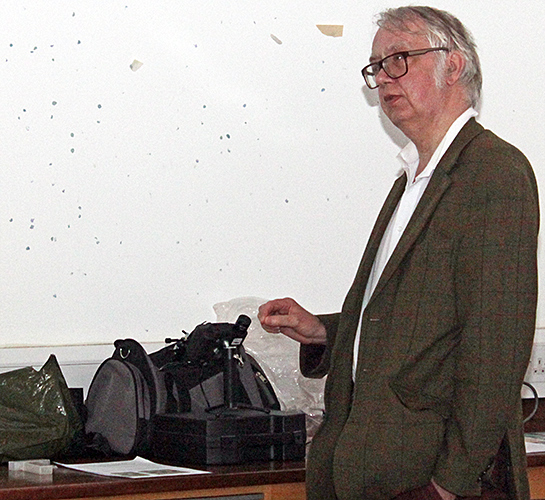 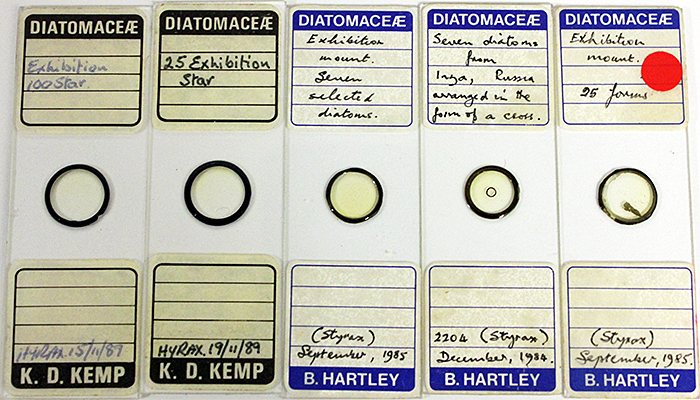 Stephen also brought 2 exhibition slides of diatoms mounted in Hrax by Klaus Kemp that had not been stored flat, and the diatoms had drifted out of place.

Paul Smith used one of the Club’s Zeiss Standard microscopes to show 6 of his slides, a butterfly scale arrangement by Klaus Kemp, a diatom arrangement sold by Flatters & Garnett, an arranged group of 4 diatoms, a group of diatoms arranged on a grid by Brian Darnton, and a group of 6 diatoms probably by John Carter. 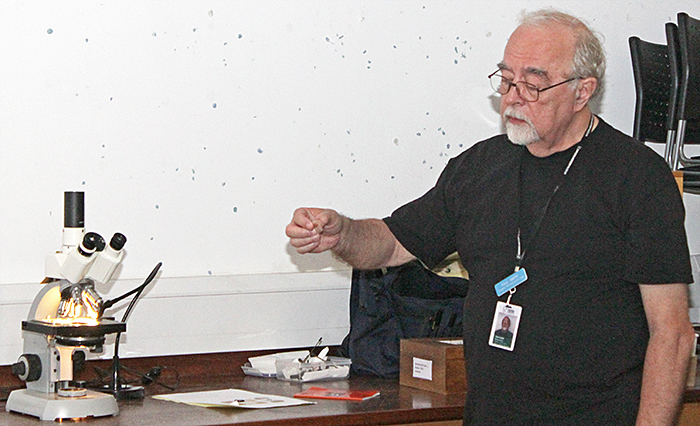 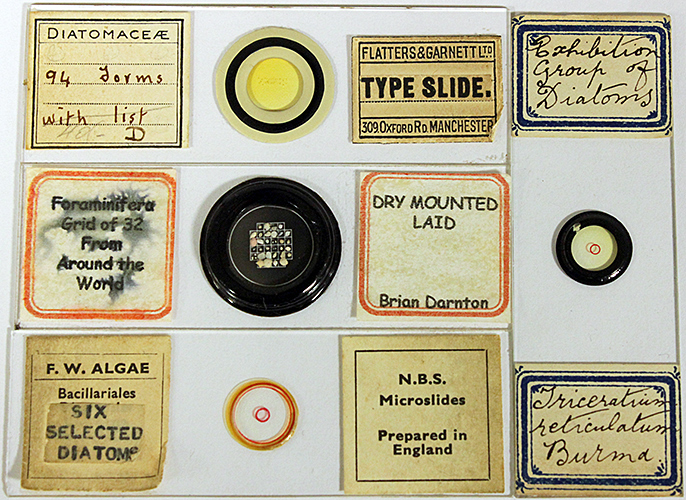 Nigel Williams used one of the Club’s Zeiss Standard microscopes to show 2 of his slides. One was forams from 2460 fathoms in the North Atlantic on 22nd May 1869 during the the deep-sea dredging expedition of H.M.S. Porcupine. The other was a Klaus Kemp arrangement of Radiolaria that was the subject of an article in the Bulletin in April 2017. 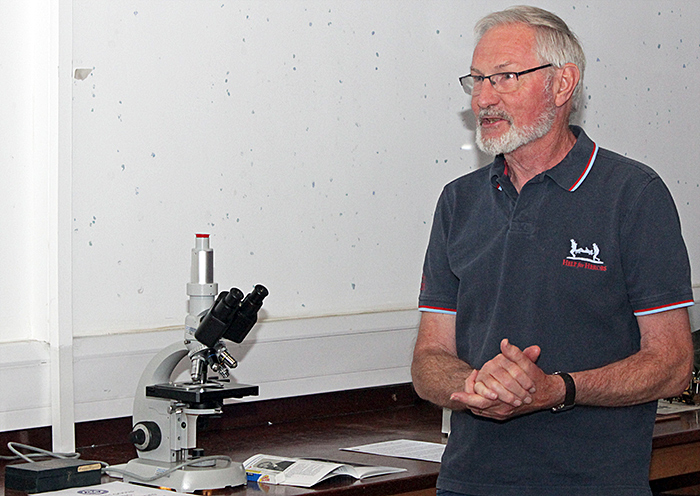 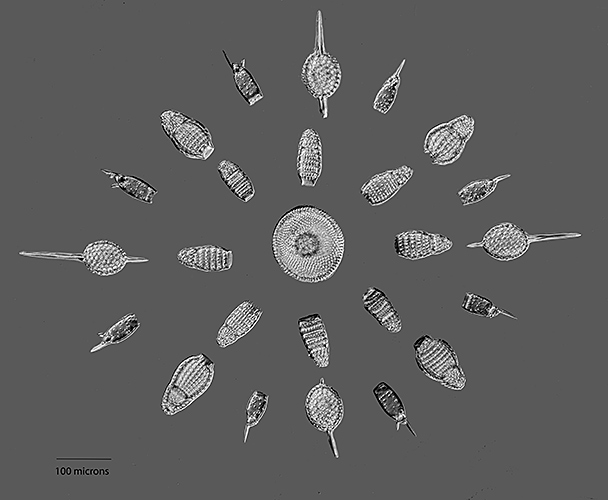 Alan Wood has a modest collection by Quekett standards, only about 400 slides, and only managed to find one appropriate slide to bring. It was made by Brian Darnton, but instead of the usual forams it reflects Brian’s recent interest in slides for the polariscope, and had an arrangement of stellate plant hairs and fern scales mounted in Canada balsam. Alan bought the slide from Brian at the Langton Matravers meeting in April. 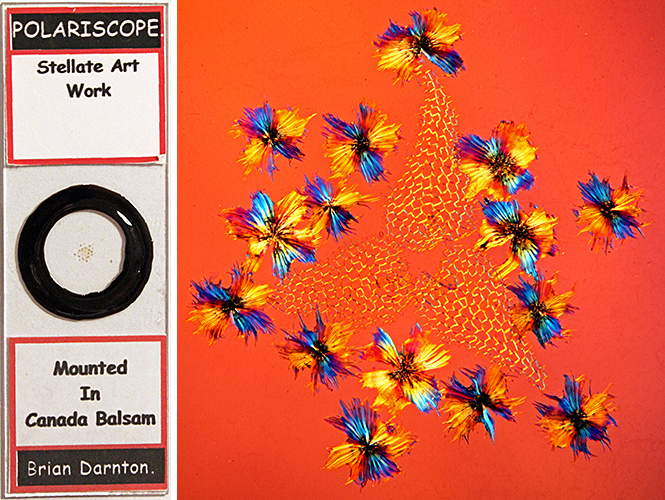 Brian has been looking at One Thousand Objects for the Microscope by M. C. Cooke for inspiration, and this slide includes 2 items from Plate I, no. 11 Scale of Sea-Buckthorn (Hippophae rhamnoides) and no. 14 Scale of Rusty-Back Fern (Ceterach oficinarum). 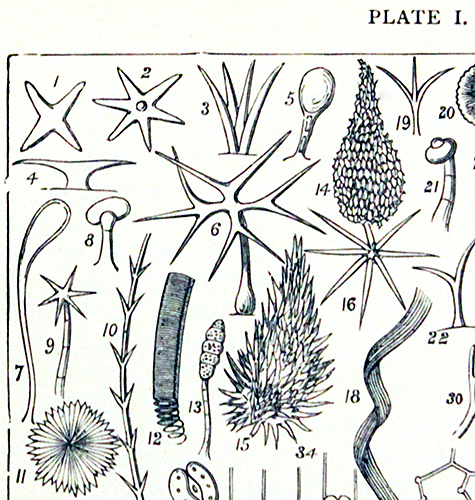 Plate I from One Thousand Objects for the Microscope