On a dry September day that started cool but became warm in the afternoon, Barry Wendon, Dennis Fullwood, Paul Smith and Alan Wood took their microscopes, cameras and monitors to Wimbledon Common for the annual Open Day as a contribution to the Club’s microscopy outreach programme. The Open Day originated as an opportunity to meet the Rangers and their horses but has expanded into a country and crafts fair. As usual, we were based in the Information Centre.

Paul Smith used a turkey baster to collect material from the bottom of the nearby cattle trough. 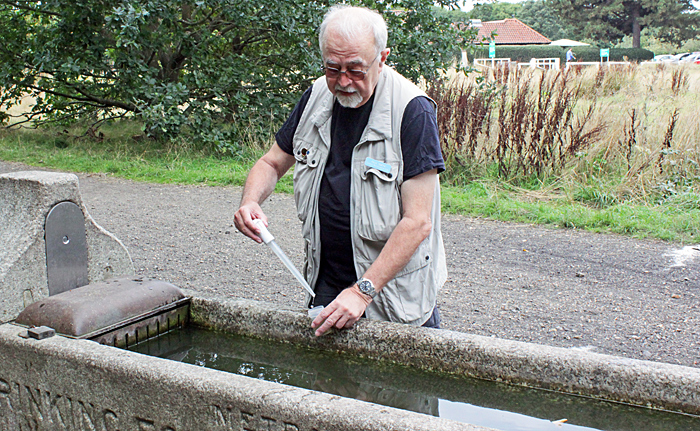 Paul used his Wild M11 compound microscope to observe specimens from the cattle trough, including rotifers, dinoflagellates and filamentous algae. He also used his stereomicroscope to examine algae on twigs. 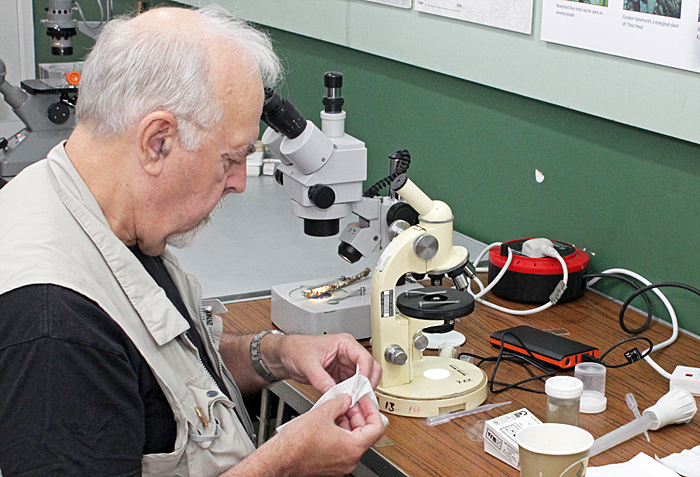 Dennis Fullwood set out yellow pan traps (containing tap water with a drop of washing-up liquid) to catch flies and other insects, and examined them with his Olympus SZ4045 stereomicroscope. 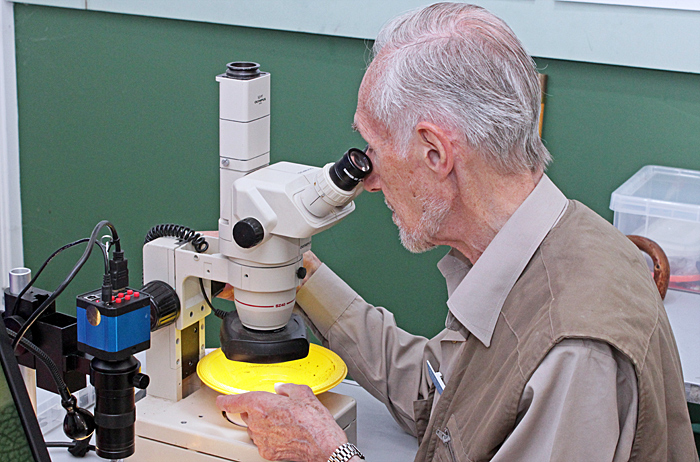 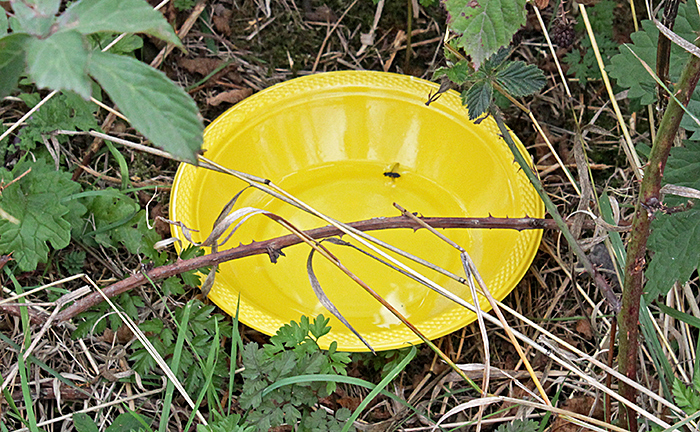 Dennis also brought a Chinese inspection camera connected to a monitor tha he used to show insects in Baltic amber, and his Nikon Labophot for showing prepared slides including the tongue of a blowfly.

Some of Dennis Fullwood’s equipment

We also used the inspection camera to look at oak leaves, and found a small sawfly larva that happily munched holes in a leaf while visitors watched. 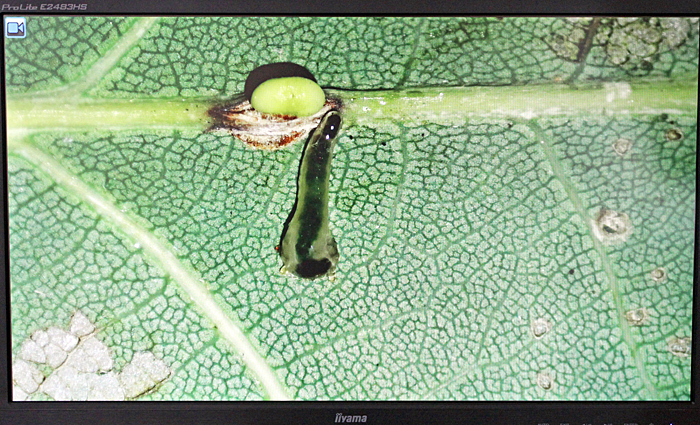 Dennis also brought a large magnifier with a circular LED lamp that clamps onto a table (it costs a little over £20 on eBay) and used it to show lichen on twigs and various things on oak leaves. 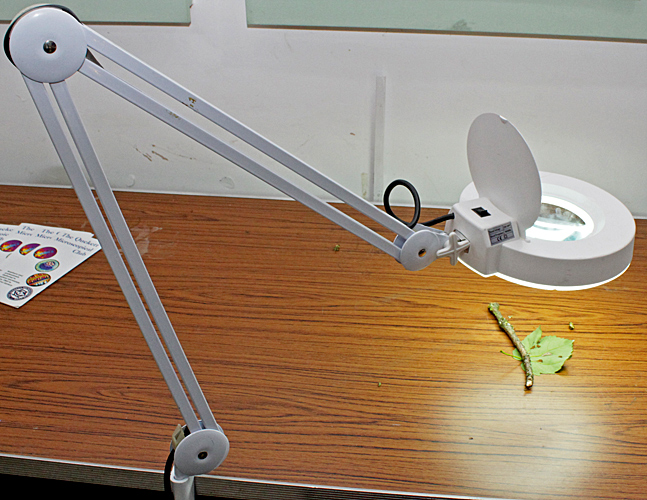 Barry Wendon brought his Olympus CK inverted microscope that allows specimens to be observed from underneath, and used it to look at specimens from the cattle trough. 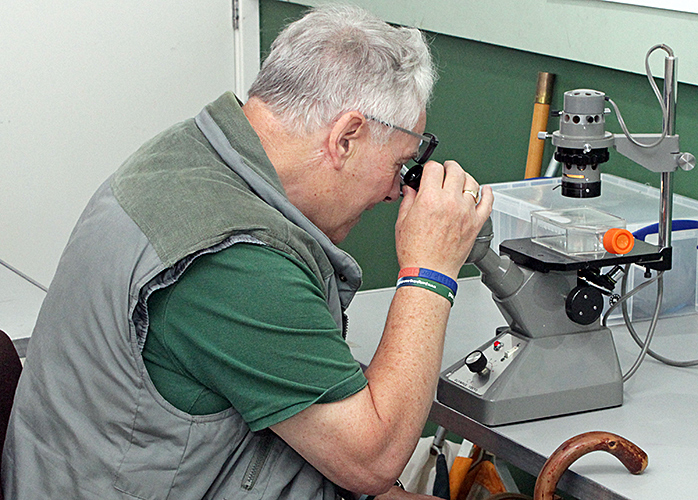 Alan Wood and Thanya Nirantasook brought a couple of microscopes suitable for children, the Natural History Museum Pocket Microscope and a small 20× stereomicroscope that is available from several eBay sellers. To demonstrate them they used specimens from the Common, including a feather and lichen on a twig. 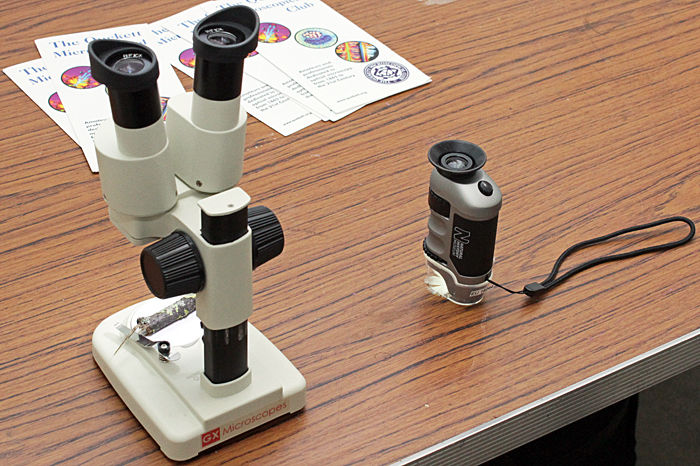 We didn’t get many visitors in the morning, but things picked up after lunch with lots of families with young children, some of whom stayed for quite a while. 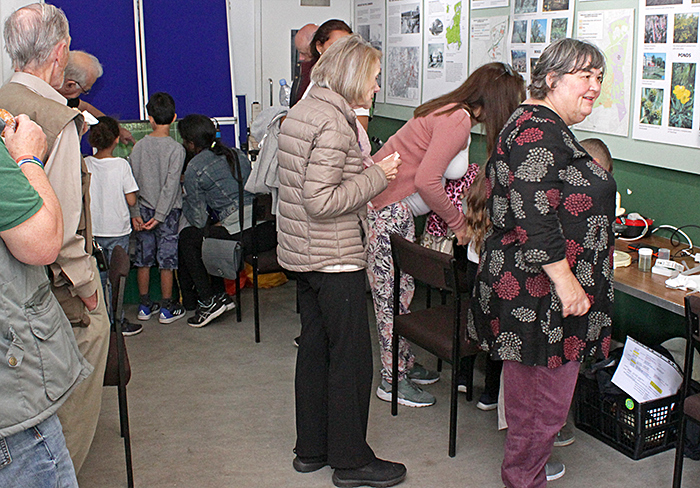 Visitors in the Information Centre

The Wimbledon Common Nature Club also had a table in the Information Centre, with lots of young visitors who were encouraged to try bark rubbing and collecting fallen leaves and cones. 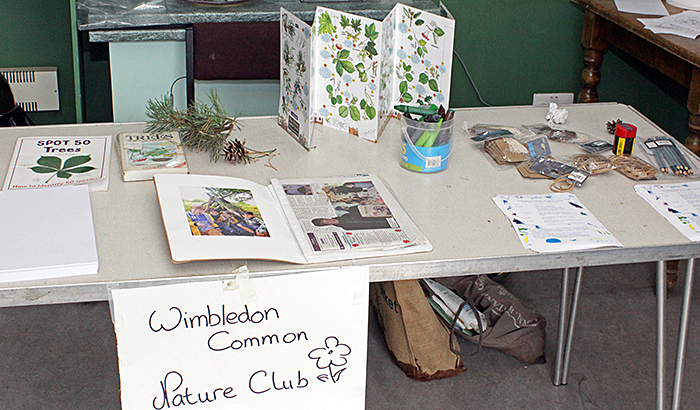 Outside the Centre, there was lots to see and do, with displays of animals (including snakes, birds of prey, donkeys, horses and sheep) and vehicles, stalls selling fast food, organic vegetables, handicrafts, prints, second-hand books, pet supplies and entertainers, and stalls from other organisations. Behind the Information Centre are the stables with the horses used by the Rangers, and an animal sanctuary with donkeys and geese. 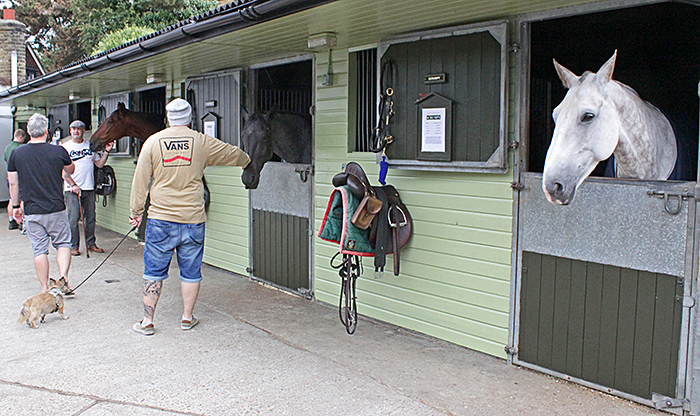 Horses in the stables

Donkeys in the animal sanctuary

One of the larger stands around the arena belonged to a new organisation, the Friends of Wimbledon & Putney Commons. 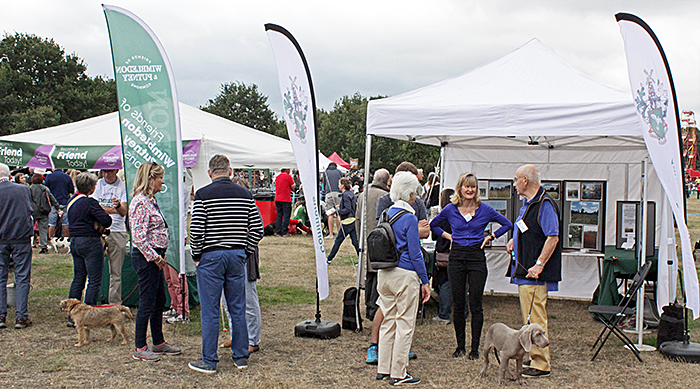 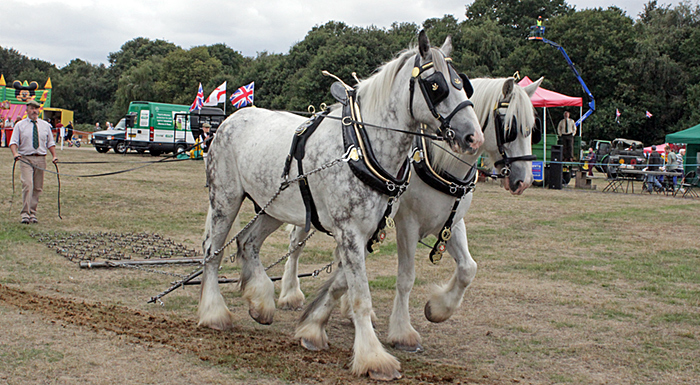 Shire horses from The Royal Parks 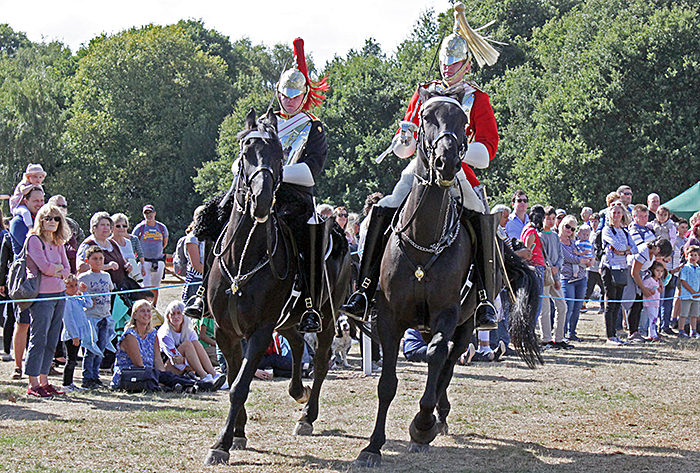 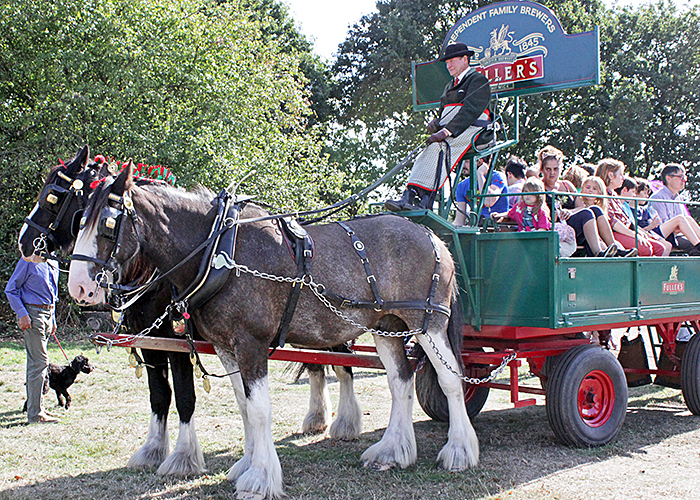 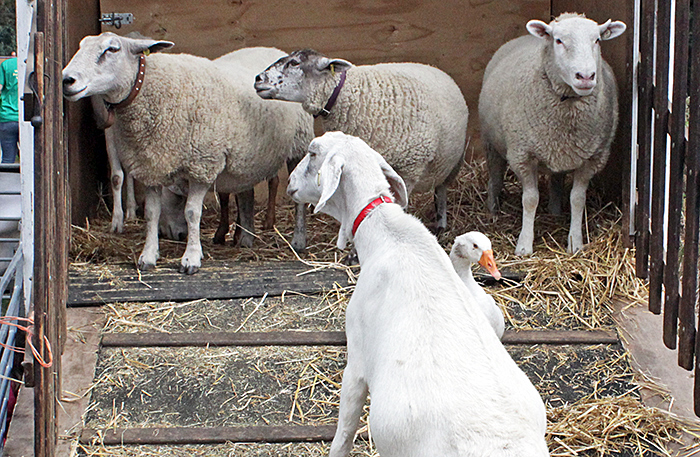 The Hawking Centre brought along an eagle, a vulture and a couple of owls, including a barn owl that was allowed to fly free in the arena. 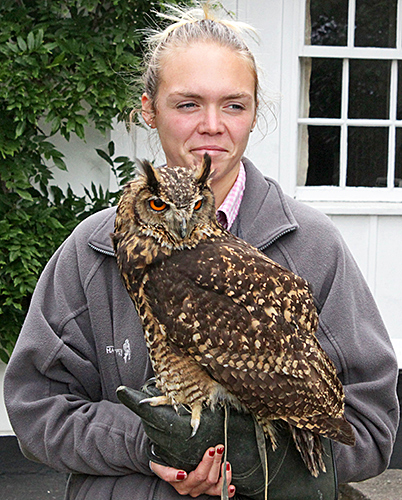 An owl from The Hawking Centre 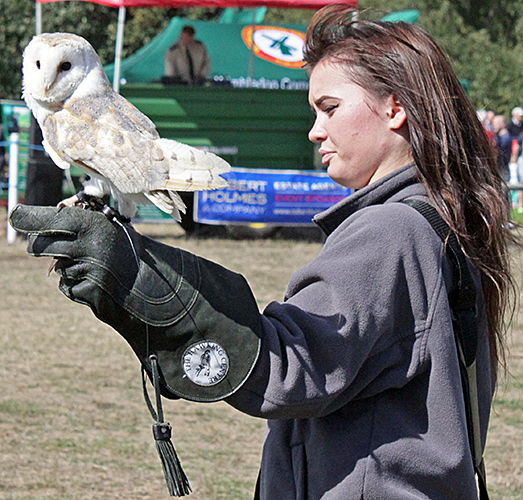 Barn owl in the arena, from The Hawking Centre

As usual there was plenty of food and drink on offer, including tea, coffee, beer, doughnuts, sausages and lots of cakes. 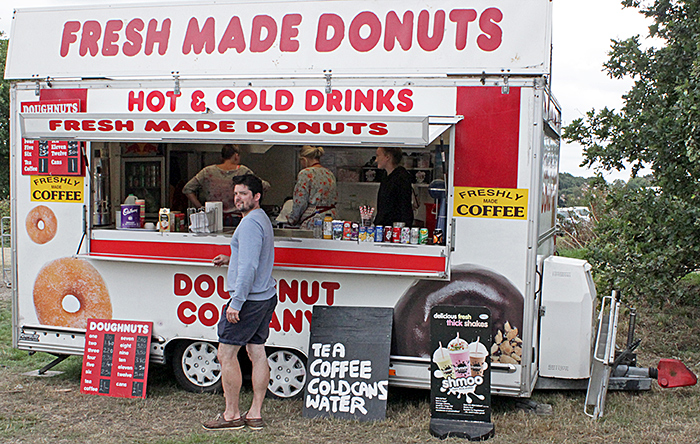 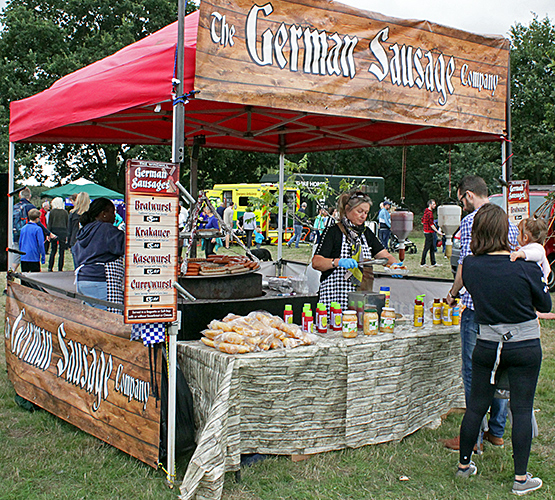 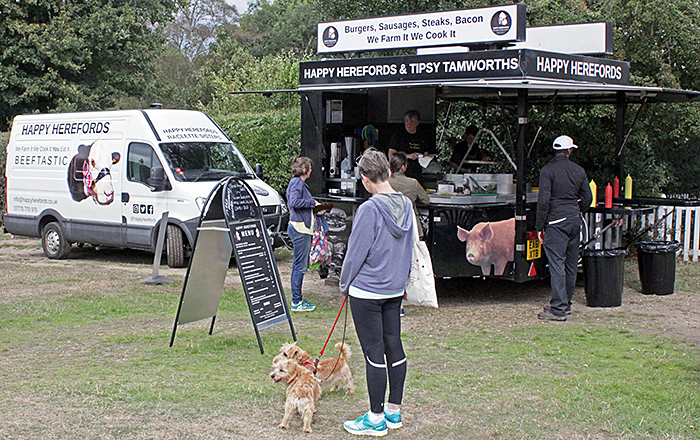 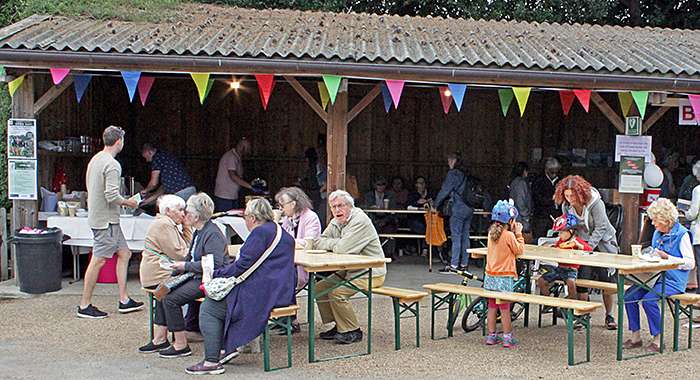 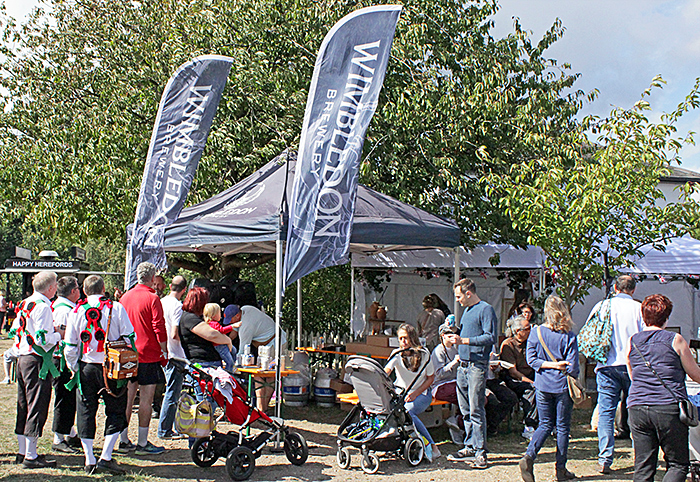 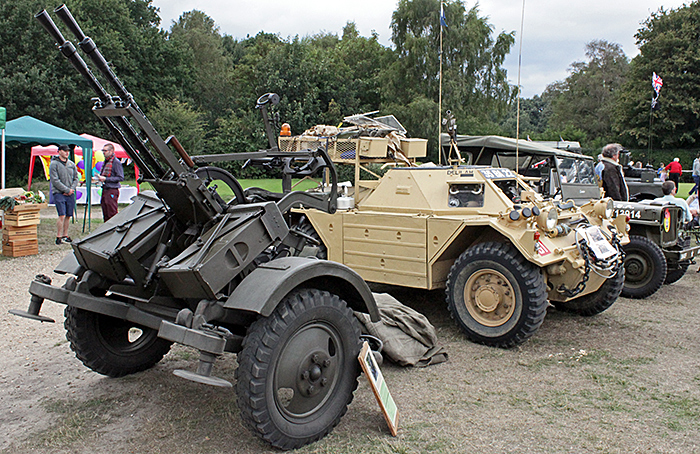 Sculptures and baskets from Willowpool Designs 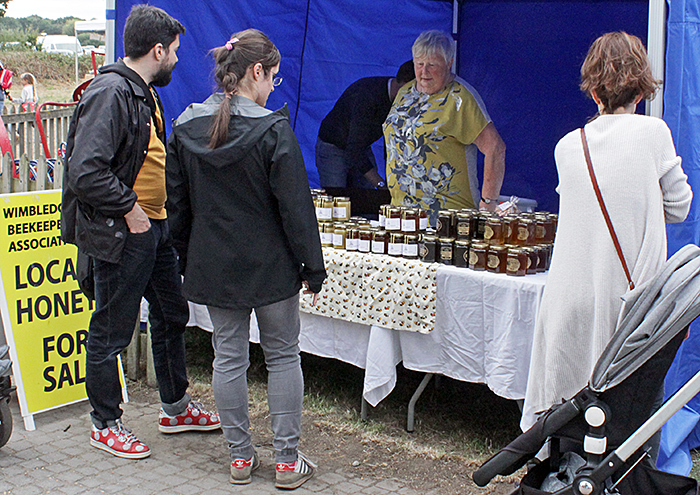 Honey from the Wimbledon Beekeepers’ Association 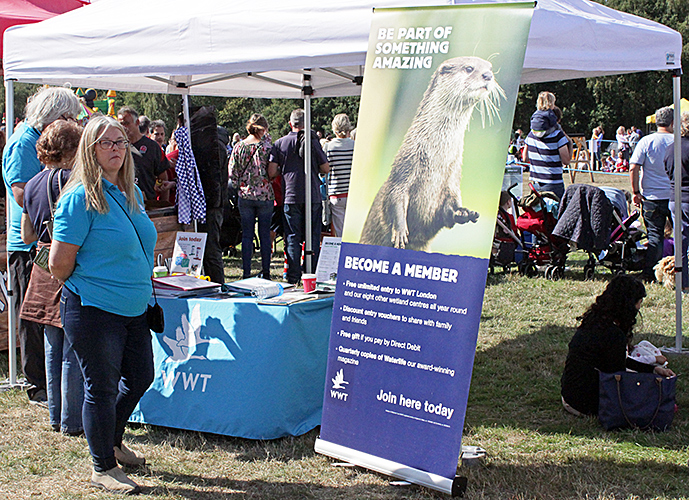 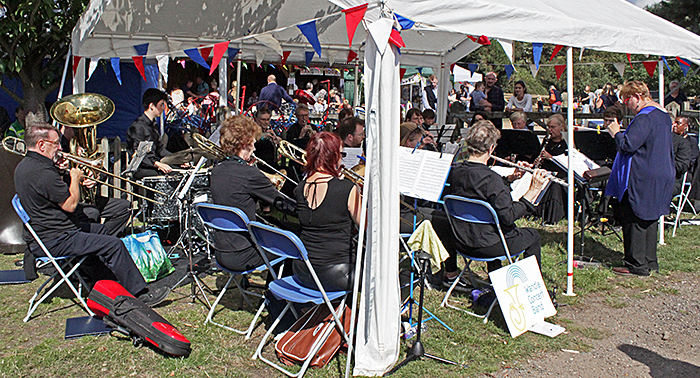 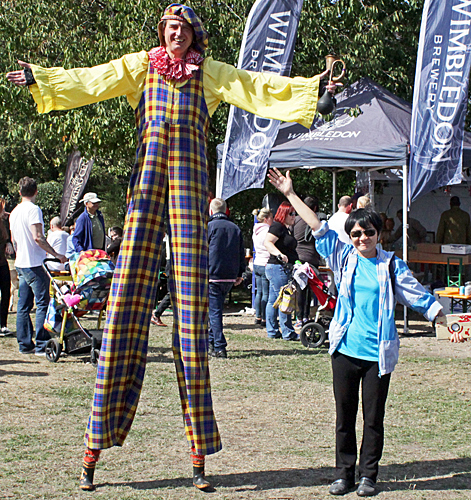