Home | About the Club | Meeting reports | East of England Meeting

Dave Skeet has taken over from Lewis Woolnough the organisation of this joint meeting of the Eastern Counties Microscopy Study Group and the Iceni Microscopy Study Group, and it was a great success with lots of interesting displays and lots of enthusiastic microscopists. The event was held in the Village Hall in Bradfield St George in Suffolk, with exhibits in the morning, followed by lunch and then presentations in the afternoon. 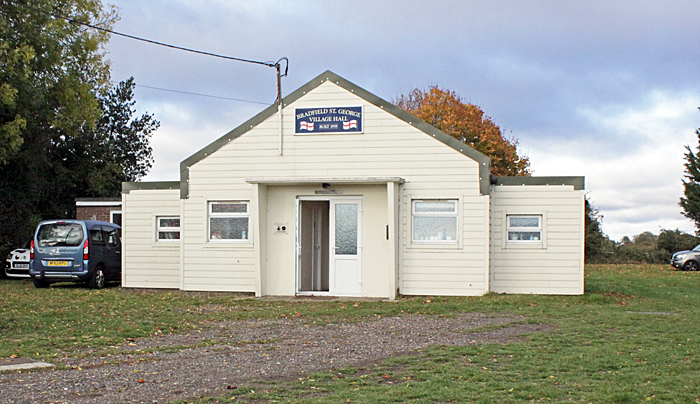 Barry Ellam brought a Stephenson-pattern brass binocular microscope by J. Swift & Son; it has a steeply-inclined tube and produces an erect ortho-stereoscopic image. Barry also brought a box of old slides, including one of the elytron of Lordops gyllenhali (a curculionid beetle). The slides were designed for top lighting, so Barry provided a simple microscope lamp. 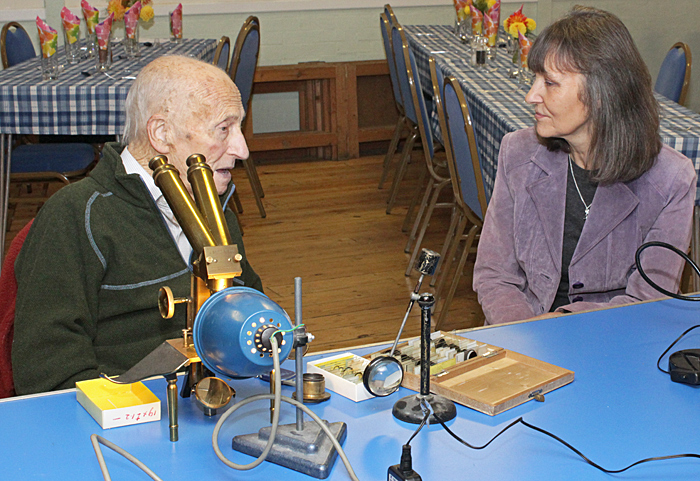 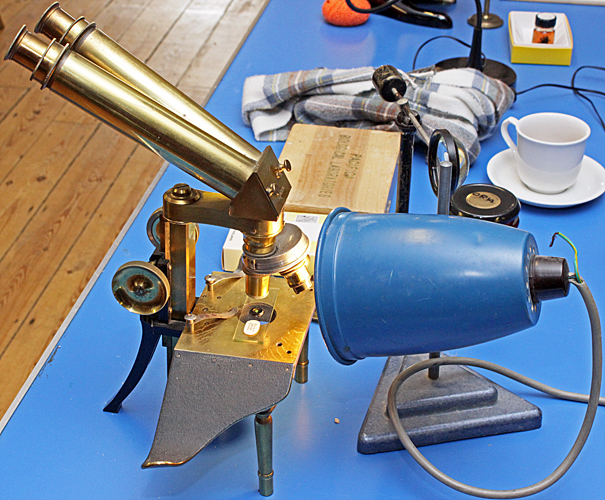 One of Barry Ellam’s slides

Brian Norman showed some life-size models of tardigrades, produced on a 3D printer, and a Cooke, Troughton & Simms CTS M7000 polarising microscope with an instruction manual that covered several microscopes of the same vintage. Brian also brought a Baker Metalette metallurgical microscope complete with its red cylindrical case but missing its power supply. As a result of chat on the QuekettMicro Facebook group before the meeting, Gordon Brown brought the power supply from his Patholette, and it worked. Stephen Parker had some circular metallurgical specimens that were smaller than the hole in the Metalette’s stage, but a couple of thin glass slides provided suitable support and proved that the microscope worked. 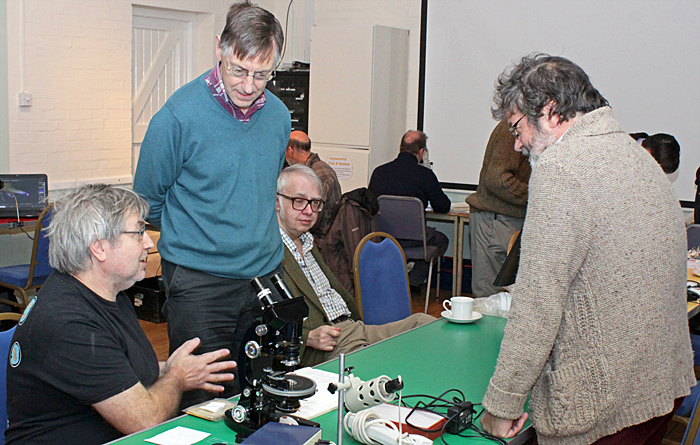 Chris Adams and Geoff Phillips used a large Wild M40 trinocular inverted microscope equipped with a plankton settlement chamber to show a sample of phytoplankton taken from the River Bore on 25th October 2018. They used a Chinese inspection camera to show images on a laptop. The books that they brought included Freshwater Algae; Their microscopic world explored by Hilda Canter-Lund & John W. G. Lund and The Freshwater Algal Flora of the British Isles by David M. John, Brian A. Whitton & Alan J. Brook. Chris Kennedy was selling 3 microscopes to raise funds for the Royal Microscopical Society’s outreach programme, two small Swift compound microscopes (one monocular, one binocular) and a Wild M4C stereomicroscope. With the provided 10× eyepieces, the Wild gave very nice images of fossils at 6× and 16×, with the magnification being changed by an unusual side-to-side sliding mechanism. 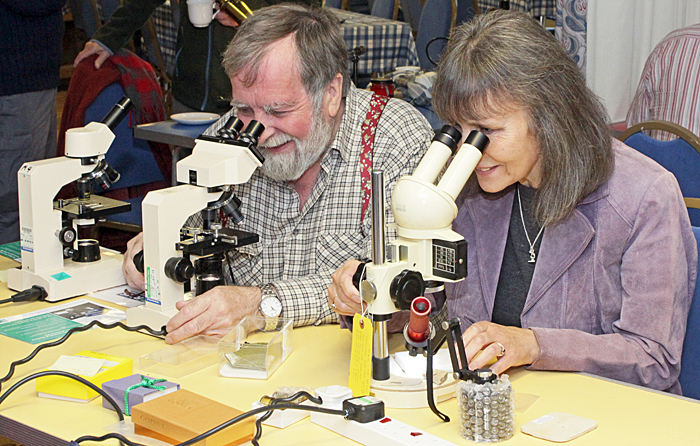 Chris Thomas brought the Quekett shop with items including the Journal on a USB drive, books, ties and polarising material. Chris’s own exhibit was a repeat from Quekex with 1:1 demonstrations of some of the free software that he uses, Picolay for stacking (increasing depth of field) and Hugin for stitching (increasing field of view). 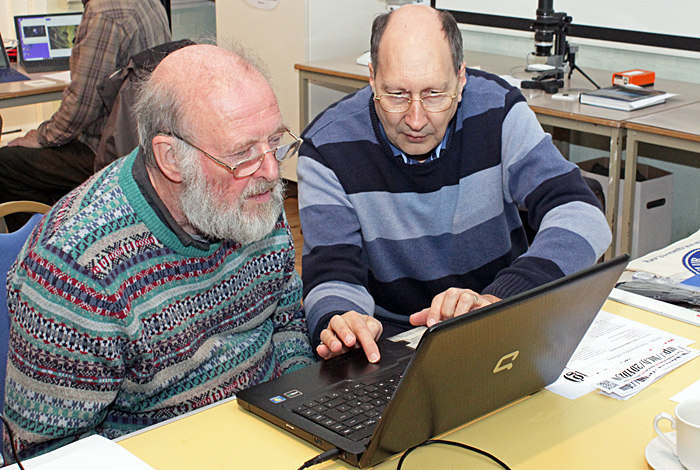 Duncan Edmonds brought along what he described as a miscellaneous microscope. The heavy base came from a Flatters & Garnett microscope lamp and supported a Nikon PB6 bellows with a reversing ring on the front (lower) standard and monocular and photo tubes from a Leitz microscope on the rear (upper) standard. The optics were a reversed 55 mm Micro Nikkor and an Olympus 10× wide-field eyepiece. Specimens were supported on a platform attached to the front standard of a Leitz bellows that was attached to the rack on the Nikon bellows. Illumination was provided by a small Hama ring-light with 12 LEDs, supported on a table-top tripod. Duncan explained that it is easy to attach a digital SLR camera instead of the eyepieces, and to use other lenses (such as reversed enlarging lenses) to provide other magnifications. Duncan also brought a book, Life at the edge of sight; A Photographic Exploration of the Microbial World by Scott Chimileski & Roberto Kolter. Gordon Brown’s main exhibit was 2 microscopes, a Leitz SM-Lux and the Zeiss Universal polarising microscope from the estate of Alastair Smith. The Universal was in beautiful condition, lacking only a bulb and power supply; the bulbs are very difficult to obtain, so Gordon had fitted an LED instead, driven from a power supply with readouts of current and voltage. To show off the microscopes, Gordon brought 2 boxes of histology slides, many of them unlabelled. He had identified some of the slides, and obtained illustrations and descriptions from the Internet and printed them out. Both microscopes had trinocular heads fitted with small digital cameras connected to a laptop, so we could admire the images on the screen as well as through the eyepieces. Gordon also brought several histology books. 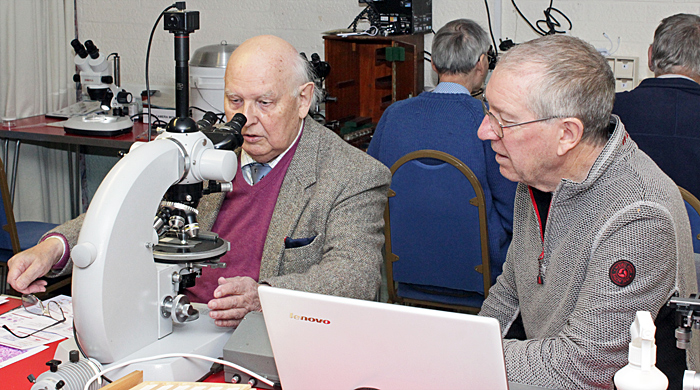 Gordon also brought along the Nachet NS300 trinocular microscope with DIC that he swapped for a Watson Hilux at Microscopium, and Stephen Parker showed him how to set it up. We do not often see Nachet microscopes; they were made in France, and this one looked very similar to some Reichert models. James Rider brought 2 small microscopes. One was a Biomax Magnifier, a portable stereomicroscope made by R. & J. Beck around 1929 that could be dismantled into a base, an arm and a head. Magnification could be changed by inverting the paired objectives and by switching between “low power” and “high power” eyepieces. James’s specimens were integrated circuits, the mechanism of a pocket watch, and lichen (Xanthoria sp.) on twigs. The second microscope was the familiar Meopta AZ-2 portable with its cylindrical metal cover. Its 3 objectives are not the standard RMS fitting but have respectable NAs (3.3× 0.08, 6.7× 0.15 and 20× 0.45). The eyepiece tube is the standard size, and James demonstrated that it can support an Olympus PM-ADF eyepiece adapter, Olympus Photomicro Adapter L and a Canon digital SLR camera. John Rhodes repeated his exhibit on melissopalynology (the study of pollen in honey) from Quekex, and he showed some of his slides (using his Olympus BHT compound microscope), some photomicrographs of pollen, and some relevant publications. John’s display included a book, Honey identification by Rex Sawyer. 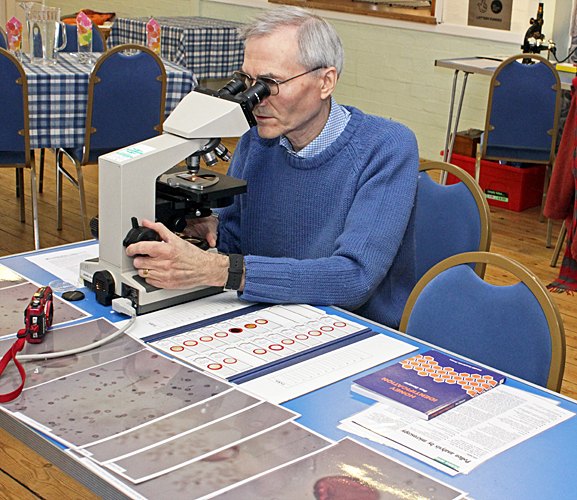 Lewis Woolnough’s subject was the freshwater shrimp Gammarus pulex, and in addition to lots of information he showed a whole specimen under his Olympus SZ stereomicroscope on the XD-E Trans-Illuminator Base. Lewis had an unusual digital camera from GT Vision in one of the eyepiece tubes; the camera could be adjusted for parfocality by turning a large knob on top. Robert Ratford brought a metallurgical microscope (a CTS M3000 with lots of accessories) and 2 polarising microscopes (a Lomo MIN-10 with a box of accessories and an instruction book, and another by James Swift. Robert’s specimens included a box of thin rock sections and a box of wooden slides with forams and minerals. 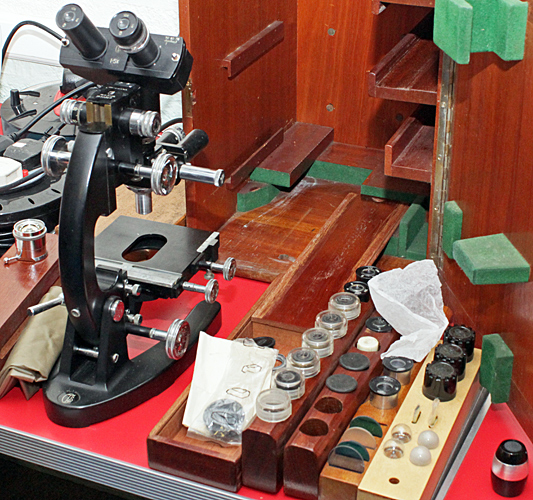 Stephen Livermore brought a trinocular stereomicroscope so that we could admire some of his dry-mounted slides.

Stephen Parker showed a Reichert Neozet (smaller version of the Zetopan) configured as metallurgical microscope and several unlabelled metallurgical specimens. The microscope could be switched between bright-field and dark-ground reflected illumination, and was equipped with a polariser and analyser. With a digital camera attached to the vertical monocular tube, we were able to admire the images on a large monitor. Steve Durr brought his GXMXTL3 trinocular stereomicroscope and what at first sight looked like a bucket but was actually a Tullgren funnel with some leaf litter. We were able to examine some of the creatures extracted from the litter, and Steve provided some books and keys to help identify them. The books included Small Woodland Creatures by Lars-Henrik Olsen, Jakob Sunesen & Bente Vita Pedersen and Animals under logs and stones by C. Philip Wheater & Helen J. Read. Tim Newton showed a black and brass Beck No. 29 London microscope displaying oblique illumination provided by a modern Ikea Jansjö work lamp and a Victorian bullseye lens. Tim’s slides were Victorian, crystals and the elytron of a beetle, chosen because they respond well to this type of lighting. Tim also brought an old Beck catalogue that included the No. 29 microscope. After a busy morning catching up with old friends and examining the exhibits and demonstrations, kept going with tea, coffee, biscuits and cakes, we all sat down to lunch of maypole tarragon pork (or vegetarian casserole) with mashed potatoes, carrots and peas, followed by a choice of apple crumble with custard, black forest trifle or fruit salad with cream. 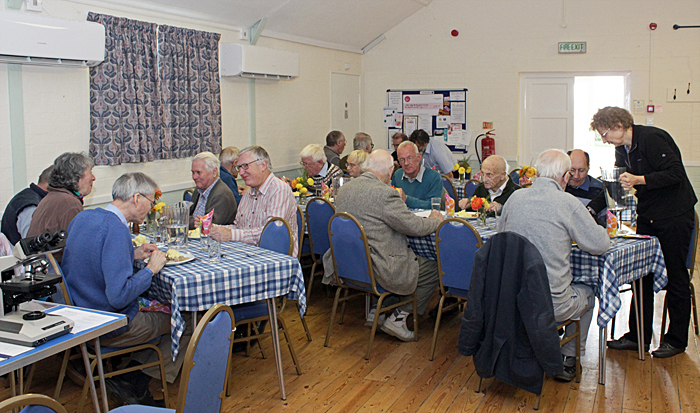 After lunch, Dave Skeet thanked everyone for attending, thanked Lynn Cardale and her helper for the refreshments and lunch, thanked the Quekett for paying for the cost of hiring the Hall, and thanked James Rider and Lewis Woolnough for setting out the tables and chairs. Lewis then thanked Dave for taking over the organisation of the meeting and for making such a good job of it.

Dave then showed a film about Wilson A. Bentley, an American who became enthused with snowflakes as a child and later used a microscope and a large camera to take thousands of photographs of snowflakes, all of which were different. Where he lived, the conditions must have been right for large snowflakes to form, not like the powdery stuff that we usually get in England.

[We will try to include the film here.]

The second presentation was by Bill Morris on fish diseases. Bill showed us photos of all sorts of pests and pathogens that weaken or kill fish, including bacteria, fungi, protozoa, coelenterates, roundworms, flukes, leaches and lice.

Fish diseases, by Bill Morris
Click the arrow to start the video; click the symbol to the left of “vimeo” for a larger version